Find God, get out of jail, slaughter again

Why did Mike Huckabee pardon child rapist Maurice Clemmons? Because God told him to 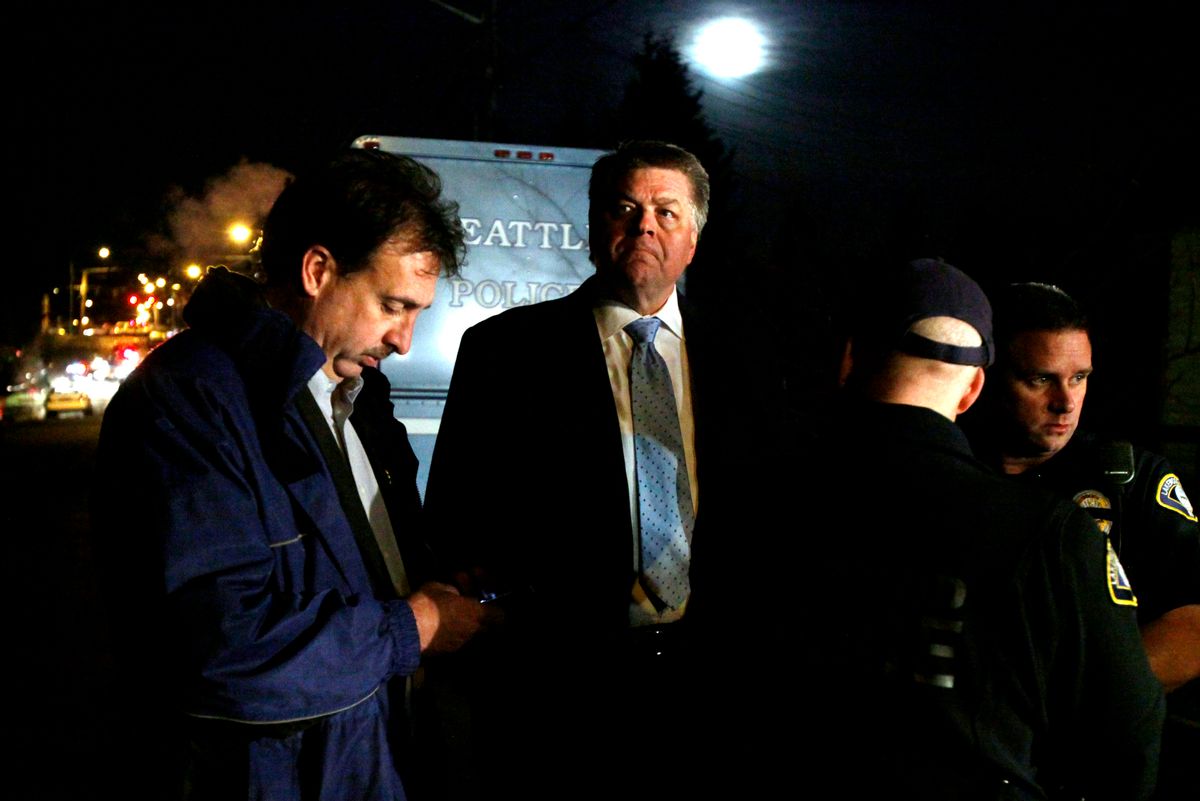 Lakewood Police chief Bret Farrer frowns as he listens to a news briefing with Ed Troyer, a spokesman for the Pierce County sheriff, and Lakewood police officers near where a man suspected of gunning down four police officers earlier in the week was shot and killed by a lone Seattle patrol officer Tuesday, Dec. 1, 2009, in Seattle. Four other people were arrested for allegedly helping the suspect elude authorities during a massive two-day manhunt. A Seattle police officer came across the stolen car in a working-class south Seattle neighborhood about 2:45 a.m., Assistant Police Chief Jim Pugel said. The officer approached the car, then detected movement behind him, recognized the suspect Maurice Clemmons and ordered him to show his hands and stop. (AP Photo/Elaine Thompson) (Elaine Thompson)
--

Another week, another grotesque mass shooting: In Washington state this time, leaving four police officers dead, four families destroyed and nine children's lives shattered. As it's politically unfashionable to wonder whether Americans shouldn't do more to keep semi-automatic handguns away from crazy people, attention soon focused on why mass murderer Maurice Clemmons wasn't locked away, where he belonged.

Once again, former Arkansas Gov. and GOP presidential candidate Mike Huckabee struggled to explain his catastrophically poor judgment. Once again, a violent felon turned loose on his say-so had run amok. Once again, according to Huckabee, currently a Fox News Channel talk show host, the disaster was everybody's fault but his own. He issued a buck-passing statement blaming "a series of failures in the criminal justice system in both Arkansas and Washington."

Assisted by an absurdly deferential Bill O'Reilly on Fox, Huckabee attempted to shift blame to Washington judges who'd freed Clemmons on $150,000 bail pending trial for child rape. Why, had he known Clemmons would go berserk, he vowed, he'd never have commuted his sentence in 2000. (One can only imagine O'Reilly's reaction to this self-serving blather had Huckabee been a Democrat.)

The Washington tragedy almost surely marks the end of Huckabee's political career. Ironically, however, for once his alibi is more right than wrong. For his own protection and everybody else's, Clemmons ought to have been inside a locked-down psychiatric unit. The system failed from top to bottom.

But let's start at the top, shall we? Although he posed as a conservative hard-liner, when it came to crime and punishment, the glib, self-deprecating Huckabee proved as softheaded and gullible as the woolliest sociology professor in the faculty lounge.

During the former Baptist minister's decade as Arkansas governor, it appeared that no matter how heinous an inmate's crimes, all he had to do for a pardon was drop to his knees, praise Jesus and persuade some preacher known to Huckabee of his newfound holiness. "Everybody knows that Mike Huckabee makes up his mind what to do by what God tells him to do," said one minister who gained clemency for a prisoner serving 100 years for the strong-arm robbery of elderly neighbors.

Making the governor's personal acquaintance also seemed to help. Inmates competed to be assigned to do yard work at the Governor's Mansion. "If you do a good job raking the governor's leaves," Pulaski County (Little Rock) prosecutor Larry Jegley complained bitterly, "you can go free."

Altogether, Huckabee commuted 163 inmates' sentences, including a dozen murderers. Several have already ended up back in prison. Indeed, given Huckabee's track record, Maurice Clemmons probably won't be the last to earn notoriety. We must pray that he ends up being the worst. Only a strong public outcry in 2004 prevented the governor from freeing a Lonoke County killer who'd beaten, raped and run over a pregnant woman with his car, only to get religion in the penitentiary.

The most notorious was Wayne DuMond, Arkansas' celebrity inmate of the '90s. Convicted in 1985 of raping a Forrest City cheerleader at knifepoint, DuMond was a glib psychopath who persuaded ideologically deranged crackpots who circulated Clinton administration "death lists" that he'd been framed. DuMond's victim, see, was a distant cousin of the then-president's. Articles appeared in places like the New York Post portraying him as a victim of the Satanic Clinton machine.

Becoming governor after Kenneth Starr deposed his predecessor, Jim Guy Tucker, Huckabee came into office publicly doubting DuMond's guilt and talking about a pardon. After the prosecutor and the victim herself courageously objected, Huckabee pulled some hugger-mugger with the parole board that ended up freeing Dumond -- the proud recipient of a "Dear Wayne" letter from the governor celebrating his release.

In 2001, DuMond was arrested and subsequently convicted of the rape and murder of a Missouri woman. Huckabee's 2007 campaign bio titled, get this, "Character Makes a Difference," falsely claimed that DuMond died in prison awaiting trial. The man's worse than a hypocrite; he's a fool. Even so, establishment pundits pretty much gave Huckabee a pass. After all, he's so charming on television. Anyway, where, exactly, is Kansas City?

Maurice Clemmons, too, played the holy card to Huckabee, who got him turned loose back in 2000. But the governor had no seeming role in Arkansas' failure to revoke Clemmons' parole after he was convicted of two more armed robberies in 2001, bringing his total to seven felonies. He was released in 2004.

Nor was Huckabee involved in Washington's decision to free Clemmons on bail with seven pending felony charges -- one involving forcing 11- and 12-year-old relatives to strip naked and fondle him while he pronounced that he was Jesus. President Obama, Clemmons proclaimed, would soon declare him the Messiah. These are unmistakable symptoms of criminal psychosis.

How and why Washington authorities failed to act is frankly beyond comprehension.