Take a bite of virgin's breasts

They're sweet, but their story isn't 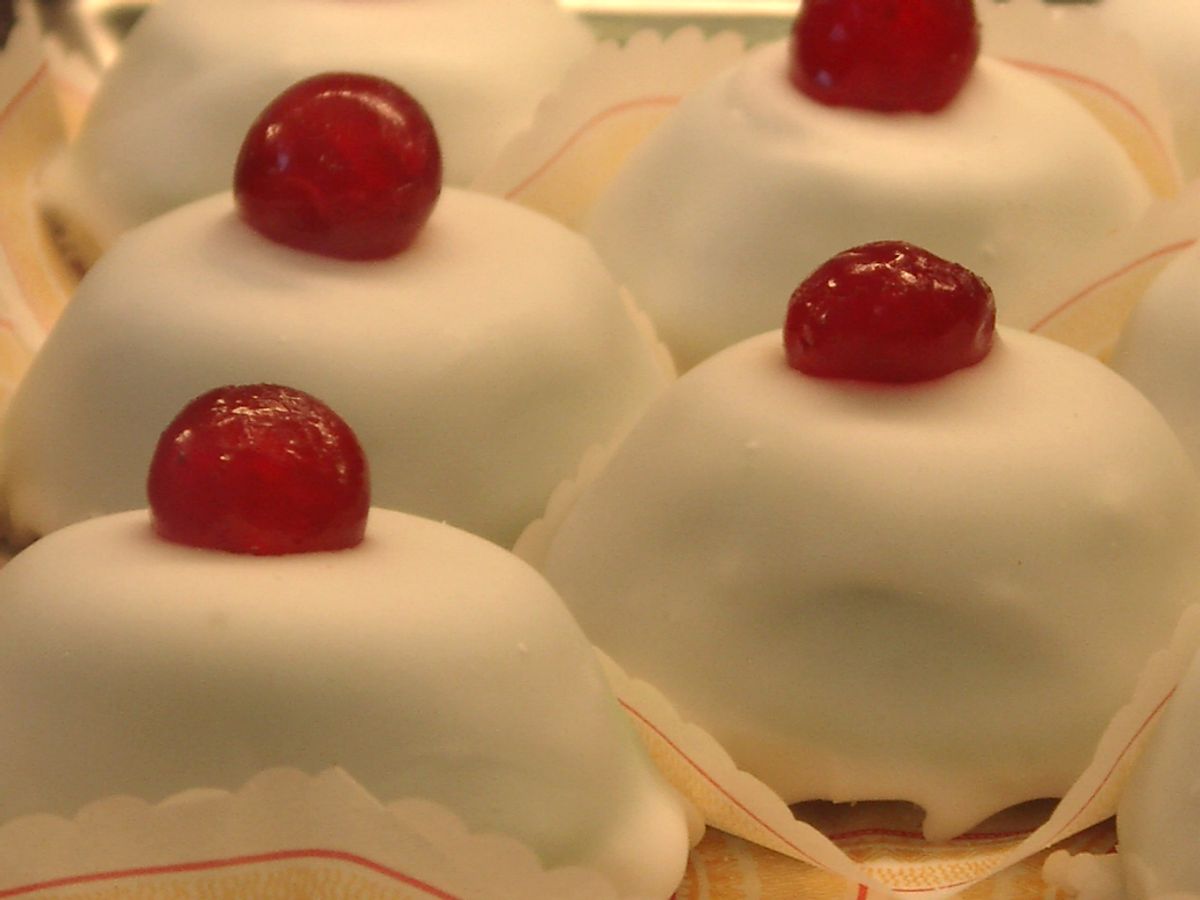 I looked at the cakes, and then turned my head to look at them again. Alabaster mounds -- not more than a handful -- set in pairs, each topped with a pert cherry. "Those are certainly ... suggestive," I said.

"They’re called virgin’s breasts," my friend translated. I admire that. Why go for the double entendre when the single will do?

But they’re not sexy pastries, even if they are rounds of sponge cake piled with sweetened ricotta and covered in marzipan. They’re devotional, an homage to Saint Agatha, patron saint of the Sicilian city of Catania. A beautiful if uncomfortably young virgin, Agatha caught the attention of Quintianus, the local Roman prefect. And, as early Christian stories go, it’s rarely a good thing when you catch the attention of the local Roman prefect. (This means things are going to get gnarly, so be warned.)

So Quintianus tried to kick it with Agatha, but his game was wack. Agatha’s heart belonged to Jesus, and that doesn’t make for a very competitive love triangle. And whatever charm he did have, he didn’t show it by banishing Agatha to a brothel, run by the incredibly named Aphrodisia.

When being forced to live in a brothel failed to make her love him, Quintianus tried putting her in prison instead, where she was visited upon daily by foul men with bad intentions. Agatha was still unmoved. Finally frustrated, Quintianus had his thugs cut off her breasts, naturally inspiring future bakers to make cakes in the shape of her sacrifice.

But! Magically, she was healed overnight. This enraged Quintianus, who then decided to grill her to death in the coliseum, despite, you know, the magic. Sure enough, he got her over the coals and the earth quaked, killing his closest advisors. The people of Catania, living in the shadow of Europe’s biggest volcano, had enough anxiety about natural disaster that they really didn’t want to deal with ones caused by jealous blasphemers. A furious mob descended upon the coliseum. Quintianus escaped, repairing with the scorching-hot Agatha back to the prison. They made some awkward conversation, she died, the earthquake stopped, and Catanians started to believe that, you know, maybe there was something special about that girl. That her relics were later believed to have saved the city from a direct hit from Mt. Etna’s lava helped, and a-canonizing they went.

Minni di virgini, the cakes that honor Saint Agatha, were probably first made in convents, which were instrumental in the development of pastry in Sicily. Nuns, having time on their hands and long institutional memories, developed and preserved these old recipes, which were often labor intensive and highly decorative; the opposite of functional food. They sold their work to fund their convents, and the sweets often referred to religious icons, heedless of (or maybe because of?) the irony. In "The Leopard," Giuseppe Tomasi di Lampedusa’s novel of the fall of the Sicilian aristocracy, the prince looks at his plate at a ball and exclaims, "Saint Agatha’s sliced-off teats sold by convents, devoured at dances!"

So where can I try some?

Forgive me, but: get thee to a nunnery. Or, at this point, to most any Sicilian-style pastry shop. If you live in an American city with an old Italian neighborhood, this probably isn’t too hard to find, as many early Italian Americans were from Sicily. If they don’t make them, and if the shop does nice work, have a piece of the cassata instead. (See below.)

Ed Behr, in a fascinating exploration of Sicilian cuisine in "The Art of Eating" (Number 65, 2003), claims that the nuns’ version of the pastry probably contained jasmine and winter squash. But according to Mary Taylor Simeti’s authoritative "Pomp and Sustenence," the name minni di virgini "so delights the Sicilians that they will apply it indiscriminately to almost any cake, provided it is small and rounded."

The versions I’ve had have all been essentially the same as the ubiquitous cassata: a little bit of cake as a foundation, a thick layer of aggressively sweetened ricotta, wrapped in an even sweeter marzipan shell. (Adding even more irony, Sicilian pastry is often extremely sweet, reflecting the influence of the Arabs, who loved their sugar.)


Have any fun stories of where a dish comes from, or have any food origins you’d like us to look into? Send them to: food@salon.com