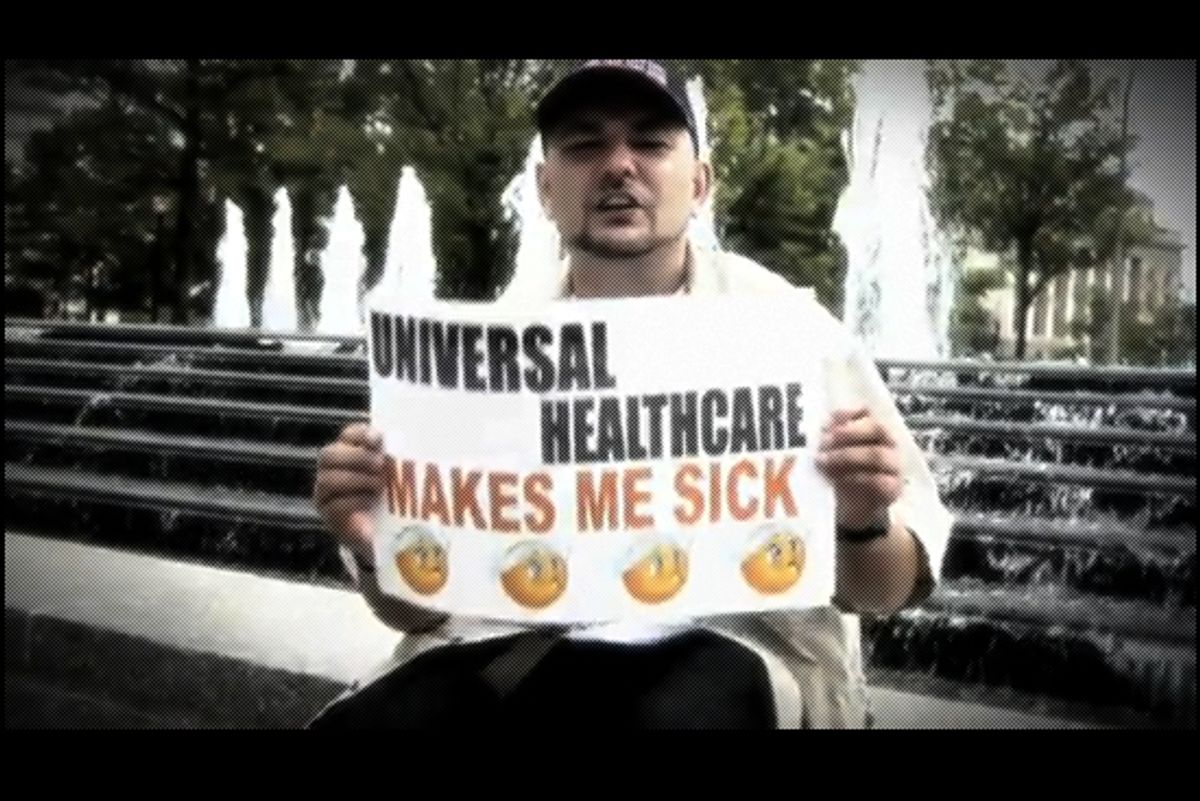 Considering it celebrated a movie about a movement that prides itself on its rough edges, surly resistance to government and populist spirit, the D.C. premiere Wednesday night of "Tea Party: The Documentary Film" made for kind of a strange affair.

To begin with, the event was held in a federal building. Yes, it was the Ronald Reagan Building & International Trade Center, so it was sort of on message. But still, it was the most expensive federal building ever erected at the time the place was finished, with a total cost of $768 million. (Then again, Reagan did more to bloat Washington's budgets than his loyal followers tend to remember.) Waiters paid by whatever government contractor manages the center circulated after the movie ended, serving little trays of government contract-purchased hors d'oeuvres to people who had just cheered lustily for a couple hours of anti-tax, anti-government rhetoric. The contradictions didn't end there. The crowd that gathered to watch a movie about people shouting at Congress began the night by listening politely to a panel discussion featuring Sen. Jim DeMint, three sitting members of the House and ex-House Majority Leader Dick Armey. The film celebrates the grass-roots spirit that tea party organizers say drives what they do, but the premiere was thrown by FreedomWorks, a conservative lobbying and policy outfit funded heavily by big corporate donors and right-wing foundations. FreedomWorks, which Armey chairs. At least the group had a sense of humor about that last bit; instead of a red carpet, the movie's producers and other bigwigs entered the auditorium on a swatch of AstroTurf, complete with football and soccer line marks.

All that is sort of in the nature of the tea parties, though. The Republican establishment knows it likes what it sees in the movement, yet GOP operatives admit they aren't really sure where it's all going. Big conservative interest groups like FreedomWorks and Americans for Prosperity lend financial and organizational support to tea party rallies. But walking through the crowd at any gathering, it's easy to find people who are clearly just so stirred up by what they hear on Fox News Channel and read on right-wing blogs that they decided to show up and yell about it for a while.

And it was mostly that spirit -- "Doggone it, let's yell about what's going on in our country for a while" -- that animated the movie. A lengthy look at six activists from Georgia (near where the filmmakers live) who came to the Sept. 12 anti-government march on Washington, the documentary swings between their stories and why they got involved and red-meat rhetoric, mostly shot at the rally. There are plenty of ominous fades and scary music thrown in, as well. It mostly looks very professional. A video producer from outside Atlanta, Luke Livingston, put it together, working with a young crew of politically like-minded types, on a budget of about $30,000 that he told me he's hoping to recoup by selling DVDs online. He attended an April 15 Tax Day protest, then got caught up in the whole thing when his neighbor, Jenny Beth Martin (who is also profiled in the movie), founded Tea Party Patriots

The narratives about the characters are sympathetic, even if they're a little quirky. One, an ex-graphic designer for the Secret Service, spends most of the movie dressed up in 18th century garb from his Revolutionary War reenactment hobby and speaking in a British-esque accent that slips off occasionally. Another man, Nate, is a young African-American conservative, who voted for President Obama but realized, not long afterward, the error of his ways. "They're taking your money right out your pocket," he tells a friend at a barbecue in the movie. The movie tries to paint the tea party people as just regular folks who got angry. It downplays any racial element to the backlash against Obama, most plainly with Nate. "I don't see racism" at the rallies, Livingston told me. "Is everybody white? Yeah, but you know, there are a lot of black people, too." A whole disc of outtakes focusing on black conservatives is in the works, he said.

But the tone of the movie is also bombastic and paranoid, much like the tea parties themselves. "They are scared," one character says of his fellow marchers, and after watching the film, it wasn't hard to see why. The country, in the filmmaker's hands, appears to be lurching out of control, careening wildly away from decent American values and toward a corporate/socialist hybrid that you don't have to understand politically to know you don't like it. Healthcare reform is only the next step in the conspiracy. Take a look at the film's trailer here, and you get a good sense of what the long version is like:

All that scary stuff is happening even though most people didn't want it to, the movie argues. "The silent majority is going to be heard loud and clear," a woman at the Sept. 12 march says in the film. Considering Obama got more votes than any other presidential candidate in history, won the widest majority in years and helped spark the highest voter turnout in decades, it's hard to imagine she's anywhere near right.

Then again, the tea party crowd often has a problem with math. On Wednesday night, there were about 300 people at the screening. And all of them cheered wildly when the movie showed time-lapse video of the Sept. 12 march, in an attempt to buttress the right-wing myth that more than 1 million people showed up there. (Most sane people say the rally drew about 70,000.) So let's round up a bit from that 300 estimate and say, oh, 4,000 hardy patriots crammed themselves into the auditorium. (Never mind that it only seats about 500.)

The audience was a mix of young conservatives in suits and pearls and, well, old conservatives in suits and pearls. There was a cash bar at the reception after the screening, doing brisk business in whiskey and lite beer. Almost as soon as the movie was over, I was cornered by two of its fans, who began interrogating me about who I wrote for and whether I share their zeal for limited government, low taxes and all things decent -- and their terror at what they saw happening in Washington. "It's one thing coming down the pike after another," one of them, Gail Volm, from Falls Church, Va., said. "You can only take a fire hose in the face for so long and then you have to say, 'Stop, it is enough.'"

The mood at the screening, like in the movie, alternated between festive and feisty. Livingston, the man behind the movie, said his mission was partly to tell the story of some of the activists who headed to Washington for that 9/12 march, and partly to have fun. "Make it entertaining," was one of his guiding principles in making the film. (Another? "Honor God.") But reminders that the business of tea parties is quite serious were never far away. "This is not a movement that's trying to pull the Republican Party to the right," DeMint said before the movie started. "It's a movement that's trying to pull the Republican Party back to where America is today." Rep. Marsha Blackburn, R-Tenn., said she didn't understand why taxes had to be so high: "If 10 percent is good enough for God on Sunday, it's for damn sure good enough for the government on Monday." The newest conservative hero, Rep. Joe Wilson, R-S.C., showed up to pander a bit, too.

But it was the movie, not the elected officials, that really roused the crowd. As the film ended, the cameras focused on a speech from the Sept. 12 rally by one of the few black speakers there. "Patriots, stand up!" he exhorts the audience, both at the march and in the theater. An American flag waves, and rock guitar riffs start getting louder. "Stand up! Stand up!" As the credits rolled, everyone in the auditorium was on their feet, cheering wildly, ready to go take back the country.