It's almost impossible to find a nation with as many torture advocates as the U.S. has. 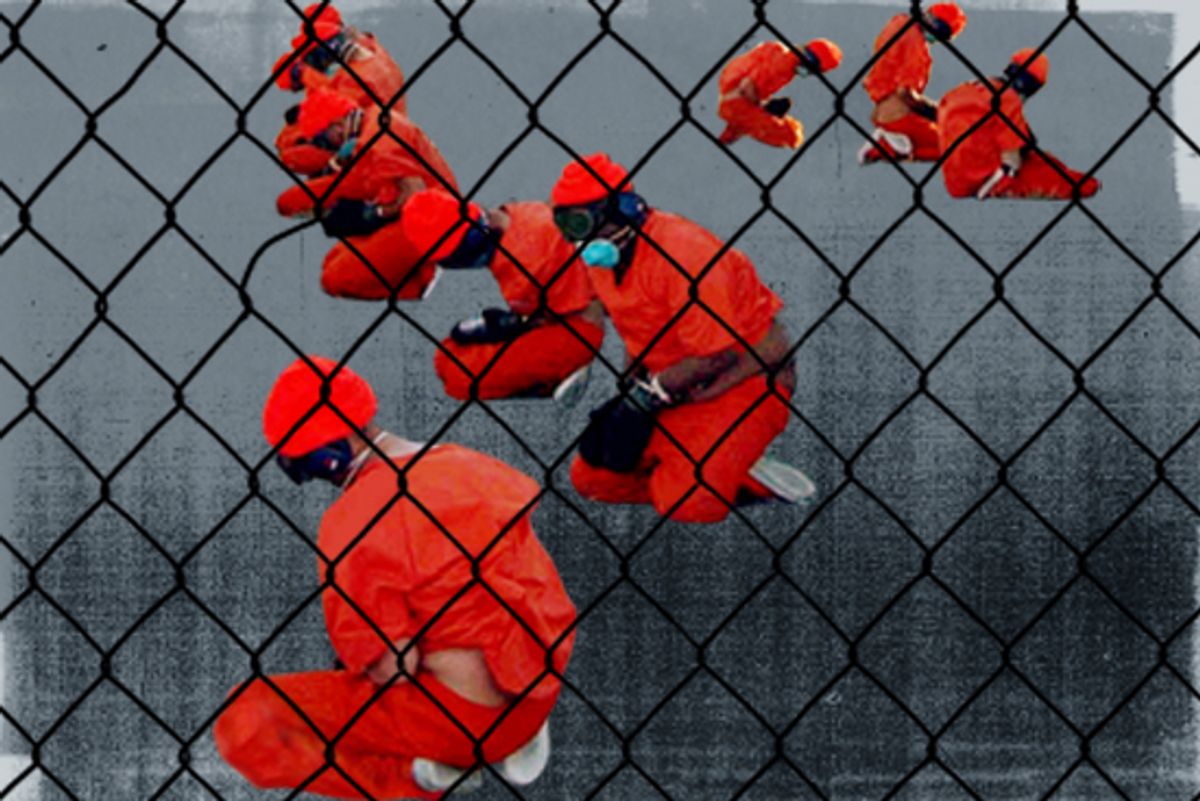 Detainees in orange jumpsuits sit in a holding area in Camp X-Ray at Naval Base Guantanamo Bay, Cuba in 2002.
--

Ronald Reagan, May 20, 1988, transmitting the Convention Against Torture to the Senate for ratification:

The core provisions of the Convention establish a regime for international cooperation in the criminal prosecution of torturers relying on so-called "universal jurisdiction." Each State Party is required either to prosecute torturers who are found in its territory or to extradite them to other countries for prosecution.

No exceptional circumstances whatsoever, whether a state of war or a threat or war, internal political instability or any other public emergency, may be invoked as a justification of torture. . . Each State Party shall ensure that all acts of torture are offences under its criminal law.

Public opinion about the use of torture remains divided, though the share saying it can at least sometimes be justified has edged upward over the past year. Currently just over half of Americans say that the use of torture against suspected terrorists in order to gain important information can either often (19%) or sometimes (35%) be justified. This is the first time in over five years of Pew Research polling on this question that a majority has expressed these views. Another 16% say torture can rarely be justified, while 25% say it can never be justified.

Just think about that.  Torture is one of the most universal taboos in the civilized world.  The treaty championed by Ronald Reagan declares that "no exceptional circumstances" can justify it, and requires that every state criminalize it and prosecute those who authorize or engage in it.  But only 25% of Americans agree with Ronald Reagan and this Western consensus that torture is never justifiable.  Worse, 54% of Americans believe torture is "often" or "sometimes" justified.  When it comes to torture, the vast bulk of the country is now to the "right" (for lack of a better term) of Ronald Reagan, who at least in words (if not in deeds) insisted upon an absolute prohibition on the practice and mandatory prosecution for those responsible.

With these new numbers, it's virtually impossible to find a country with as high a percentage of torture supporters as the U.S. has.  In Iran, for instance, only 36% believe that torture can be justified in some cases, while 43% believe all torture must be strictly prohibited.  Similarly, 66% of Palestinians, 54% of Egyptians, and over 80% of Western Europeans believe torture is always wrong.  The U.S. has a far lower percentage than all of those nations of individuals who believe that torture should always be prohibited.  At least on the level of the citizenry (as opposed to government), we're basically the leading torture advocacy state in the world.

Adam Serwer says that this is "what happens when one party in a two party system makes something outrageous part of its political platform: Even the most abhorrent behavior can be mainstreamed."  That's basically true, but even leaving aside the fact that many Democrats acquiesced to if not outright supported the same polices, this outcome is also attributable to our collective and very bipartisan decision not to investigate and prosecute the torture crimes that were committed.  After all, how is it possible to credibly maintain that we believe torture is some sort of extreme crime and absolute evil when we sat by while our political leaders did it and now refuse to comply with our obligations to prosecute it?  By doing that, aren't we implicitly though unambiguously conveying that, whatever our rhetoric, we don't really think torture is all that bad?  We don't "Look Forward" when we think truly awful crimes have been committed; we Look Backwards (sometimes very far backwards) and prosecute them.  Whatever else is true, that's the message most Americans have received and embraced:  torture is not really worth prosecuting so it must not be truly heinous.

UPDATE:  Several commenters raise the reasonable objection that today's 2009 Pew poll shouldn't be compared to the 2008 World Public Opinion poll I cited above because they ask different questions (the former measures the % who believe that torture "can never be justified" while the latter measures the % who believe that "all torture should be prohibited").  I think they're reasonably comparable, but even if one disagrees, the 2008 WPO poll finds that America has a higher percentage of people who believe that torture can be used on terrorists and/or used generally than all but a handful of countries in the poll.

As for the reason more Americans find torture justifiable than ever before, today's Pew poll finds that "both Democrats and independents have become more accepting of the idea that torture can be justified" and, worse:  "47% of Democrats say torture can either often or sometimes be justified -- more than in any previous Pew poll."  Meanwhile, Republican support for torture has remained fairly steady (67%).  Thus, the increase in support for torture among Americans this year is largely due to increased acceptance among Democrats and, to a lesser degree, independents (h/t sysprog; see p. 52 of the Pew Report)