Whatever you do, don't dis Brazil

A columnist who criticized the handling of a crash inquiry is being sued for defaming the country's honor. Huh? 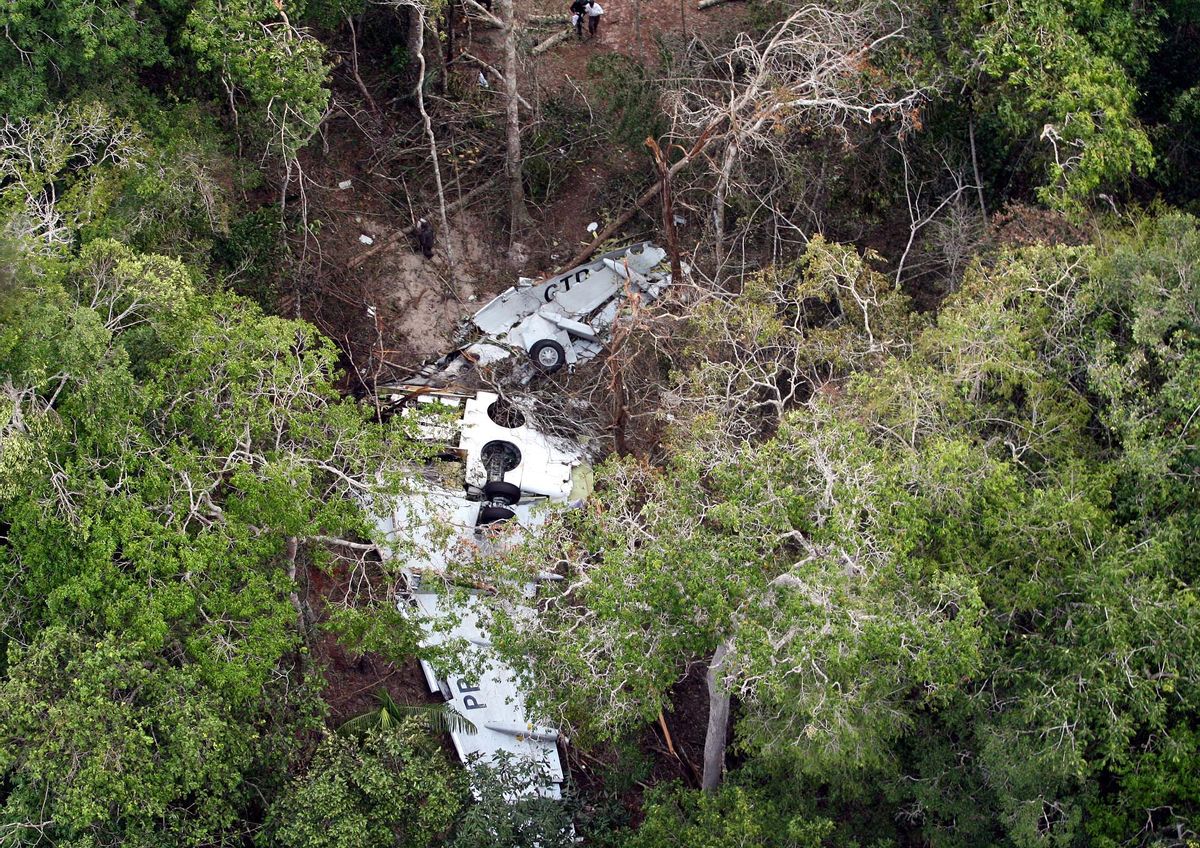 Part of the fuselage of the Gol airlines Boeing 737-800 that crashed in the jungle after clipping an Embraer Legacy 600XL executive jet last Friday, lies on the jungle floor at the Jarina Indian reserve in the Brazilian Amazon basin October 1, 2006. Rescuers recovered the first two bodies from the wreckage of the crashed Brazilian passenger plane in the Amazon jungle on Sunday and reported that none of the 155 people on board had survived, the Brazilian Airforce said. REUTERS/Jamil Bittar (BRAZIL) (Reuters)
--

In September 2006, a Gol Airlines Boeing 737 bound from Manaus, Brazil, to Brasilia with 154 people on board collided with an executive jet carrying seven Americans. The smaller plane remained flyable and made an emergency landing at an air force base. The 737 plunged into the Amazon jungle -- in a region so inaccessible that indigenous Kayapo Indians used machetes to help emergency crews reach the scene. There were no survivors, making it the worst-ever crash in the long and storied history of Brazilian aviation.

The accident was covered extensively in this column, here and here.

Also covering it extensively was Joe Sharkey, business travel columnist for the New York Times. Sharkey was a passenger on the executive jet and survived to tell his story. He wrote about the incident in the Times and in his personal blog, and he was interviewed widely by the U.S. and international press (including yours truly for this October 2006 column in which he describes the collision in startling detail). Sharkey has been loudly critical of Brazil's handling of the investigation, and of its air traffic control system. The pilots of the executive jet were detained without charges for ore than two months, and indeed shortcomings in the Brazilian ATC, which is run by the country's military, appear to have been the chief culprit.

Well, in one of the strangest stories of the year, Sharkey is now being sued for defamation on the grounds that he insulted the national honor of Brazil. The plaintiff is Rosane Gutjhar, a resident of Curitiba, a large city in southern Brazil. Gutjhar, whose husband was killed in the crash, wants a retraction and $280,000 in damages. The suit is based on a provision of Brazilian law that permits private citizens to claim damages for perceived insults against the nation's dignity.

Gutjhar says that Sharkey described Brazil as "archaic" and called its citizens "idiots." Sharkey categorically denies this. The quotes cited in the lawsuit, he says, were falsely attributed to him through reader comments (made by Brazilians) published on a Brazilian news Web site. That ought to be easy to prove, and ought to be grounds to have the whole thing dismissed, but lawyers have told Sharkey that he needs to take the lawsuit seriously.

Should it continue, it presents serious implications for journalists.

"Brazilian judicial authorities should dismiss this case," said Carlos Lauría, coordinator for the Committee to Protect Journalists, in a statement. "Sharkey has the right to report on this tragic accident and voice his opinion on the ongoing investigation."

According to the CPJ statement, thousands of businessmen, politicians and public officials have filed lawsuits in recent years against media outlets and journalists as a means of controlling criticism. "The lawsuits are filed in a politicized climate in which lower court judges routinely interpret Brazilian law in ways that restrict press freedom," CPJ reports. Added Carlos Lauría, "The case again Joe Sharkey and the onslaught of civil and criminal complaints against Brazilian journalists are unbecoming of a robust democracy such as Brazil."

I couldn't agree more. If the Brazilians are concerned that others look at them as second-class world citizens, they should think twice. This is banana republic stuff.

"Such libel suits pose a threat to the free speech of American policymakers, scientists (lawsuits over research that someone doesn't like), travel reviewers, and even sportswriters who might 'offend Brazil's dignity' in the walk-up to the Olympics," said Sharkey in an e-mail. "Especially if they start writing about things like crime and infrastructure problems in Rio de Janeiro."

Meanwhile those two American pilots are currently being tried in absentia by a Brazilian court, while an investigation by the U.S. National Transportation Safety Board has cited faulty air traffic control protocols as the primary cause of the catastrophe.

I fly regularly to Brazil. The quality of air traffic control at and around the big cities is generally excellent and virtually no different from that of Europe or the United States. Over remote areas, however, things are more challenging. Amazonica Control is the agency in charge of most airspace over the immense Amazon basin. Here, radar coverage is limited and radio communications sometimes intermittent. Controllers can be difficult to reach, and often sound as if they're talking through a tin can and string. Transmitting and receiving even simple instructions can take multiple attempts.

On the whole, though, the problems I experience are more an inconvenience than a danger. VHF voice communications are always troublesome when flying over remote areas (this is one of the reasons they don't exist when flying over oceans), and I have never felt that conditions over Brazil were unsafe. If they were, dozens of daily flights operated by American, European, Middle Eastern and Latin American airlines wouldn't be going there. (As many as 10,000 people per day pass through Brazilian airspace aboard U.S. jetliners alone.) At the same time, no, Brazil's ATC system is not as good as it should be. Just as the country's authorities aren't coming clean about the collision, or being reasonable in their case against Joe Sharkey.

Speaking of people in the media...

Richard Quest is the bespectacled, supercharged host of the CNN shows "Quest Means Business" and "CNN Business Traveler." He's definitely an acquired taste, and there are those who find him repellent. Personally, I find his thundering voice and over-the-top persona to be equally hilarious and riveting. He makes me tired just watching him. I wouldn't have that much energy if you poured a jug of kerosene over my head and lit me on fire.

Love him or hate him, Quest is one of the most knowledgeable sources out there when it comes to air travel. He knows his airlines, his planes and his airports better than anybody else on television.

He recently hosted an excellent segment about British Airways' new all-business class service between JFK and London City Airport. The route is flown by an Airbus A318 outfitted with 32 sleeper seats. The unusually short runway at London City entails substantial weight penalties for takeoff, requiring a fuel stop on the westbound leg. For this, B.A. has smartly chosen Shannon, Ireland. Not only is Shannon uncrowded and user-friendly, but passengers can clear U.S. Immigration formalities on site, eliminating the need to do so in New York. Quest took the opportunity to give a little run-through of the history of the Shannon airport, with historic photographs of Lockheed Constellations, de Havilland Comets and the like.

Back in the day, prior to the advent of long-haul nonstops, Shannon was a bustling refueling station for flights traveling between Europe and the U.S. Transit passengers would mill around the terminal, giving rise to what became the world's first duty-free shop. The airport is still used sporadically as a "technical stop," as the refueling gigs are called nowadays, mostly by military flights and the occasional charter. It's also a tourist hub for western Ireland, served by most of the big American carriers.

Shannon's history is similar to that of Gander, Newfoundland, another former stopover point for postwar propliners and 707s. But while Shannon has held its own, Gander has become a forlorn and deserted place. I dropped into Gander once or twice when I flew freighters for DHL. This photo, taken in 1998, I think tells it all. I don't know what the Newfoundland equivalent of tumbleweeds might be, but there should be lots of them rolling around the apron at Gander.

Erroll Southers, a former FBI agent, has been appointed by President Obama to lead the Transportation Security Administration. He replaces Kip Hawley, whose tenure fostered and entrenched some of the agency's worst policies. Southers' appointment has been welcomed by both industry and passenger groups, and he is widely seen as a likely advocate for sensible reform. TSA's screening rules are such a basket case of waste and folly that it's tough to be optimistic, but let's hope those observers are right.

And in closing, something fun: While I'm constantly critiquing airline logos and liveries, it dawns on me that I've never critiqued airline alliance logos or liveries.

The three big partnerships are SkyTeam (headed by Delta and Air France), Star Alliance (United, Lufthansa and Continental, among others) and Oneworld (American, Qantas, British Airways, etc.). All three utilize a circular logo.

SkyTeam's is the winner. The ribbon motif and arcing typeface are elegant and refined.

Oneworld's purplish blob is boringly corporate. (Plus, that name, "Oneworld," has such uncomfortable overtones.)

Star Alliance's is hideous -- a clunky assemblage of pyramids (triangles? diamonds?) that looks as if it had been designed by a sixth-grader. And the shape of texture of those faux diamonds are a dead ringer for the Delta "widget," which is a tad ironic since Delta belongs to SkyTeam, not to Star.

Member airlines have taken to painting select aircraft in full alliance colors. None of the three, in my opinion, looks particularly fetching when spread billboard-style over the side of a plane. Here's Star, Oneworld, and SkyTeam.

You be the judge.

Next time in Ask the Pilot: The inside story of Northwest 188. Plus, a new bill in Congress calls for big changes in pilot hiring practices.