"Up in the Air": Take the next flight 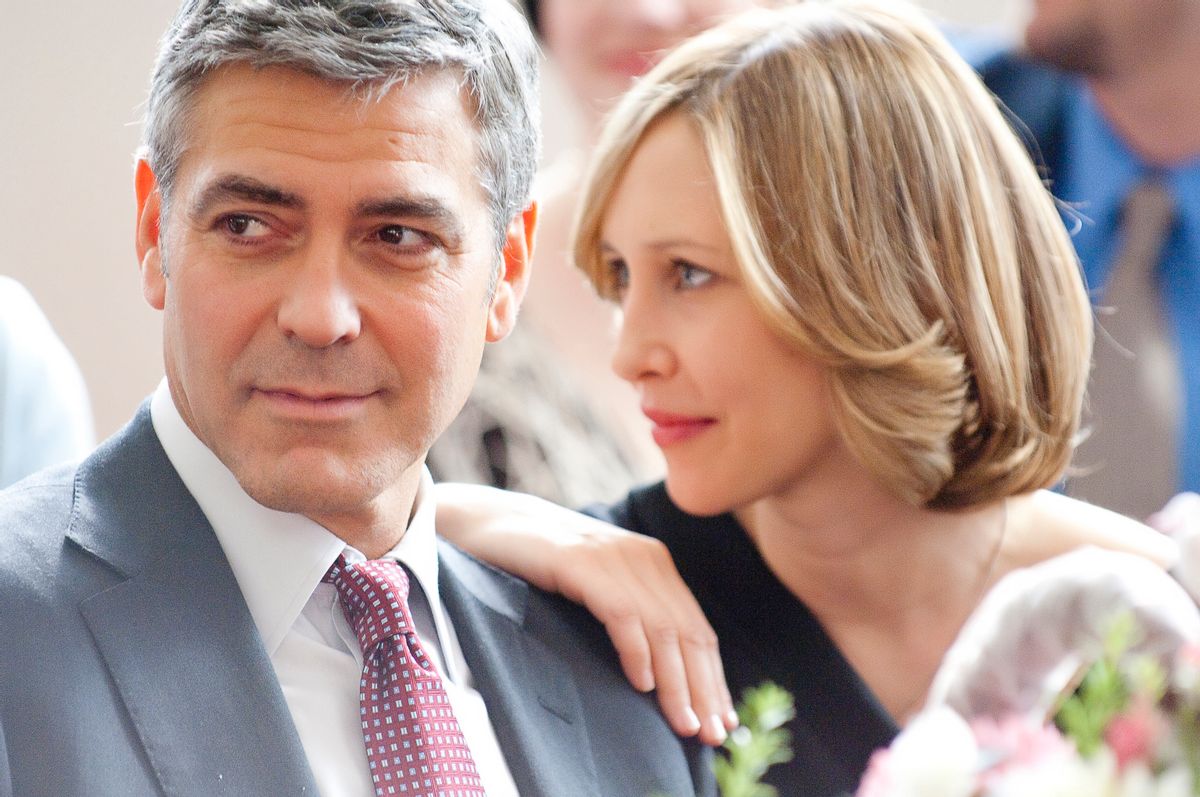 George Clooney and Vera Farmiga in "Up in the Air." (Photography By: Dale Robinette)
--

In Jason Reitman's "Up in the Air," George Clooney plays a frequent-flying, loafer-wearing, airline-miles-hoarding smoothie whose job is to fire people. In other words, he's in the canning business: As his character, Ryan Bingham, explains in voice-over, he roams the country doing the dirty work for bosses who "don't have the balls to sack their own employees." He treks to places like St. Louis and Detroit, where he sits these poor Joes and Josephines down and spoon-feeds them a line of patter about how being out of work is going to be really good for them, a golden opportunity to move on to greater things in life. Sometimes they bluster and fume at him; sometimes they cry. He cares -- a little -- but his professionalism always carries the day. When his work is finished in one city, he jets off to another, a modern-day nomad in a wrinkle-resistant suit. He's a success story built from the empty shells of other people's lives.

But Ryan is disconnected from his family, from life. He needs to learn what's really important in life and, by gum, Reitman isn't going to let go until he does. "Up in the Air" is a deboned version of Walter Kirn's 2001 novel of the same name; it goes down so easy, you barely have to chew. That would be OK, if the movie weren't a slick vehicle that's also pretending, with a vengeance, to be about the "little" people. Reitman dots the picture with a few pixels from the real world: Some of the firees Ryan encounters are played by actors (including J.K. Simmons and Zach Galifianakis), but others are played by real people who've recently lost their jobs. Reitman conducted searches in St. Louis and Detroit to find them; many of their lines are improvised rather than scripted. But while Reitman must think he's performing a service to humanity, making the movie extra applicable to today's world (Kirn's novel, of course, was written well before the current economic crisis, although Ryan's profession is the author's invention), "Up in the Air" comes off not as topical but as opportunist. The picture is brushed with a fine glaze of slickness, a product sealed in a blister pack. It's like airplane air -- it has a packaged freshness that isn't really fresh at all.

"Up in the Air" opens, as so many literary adaptations do these days, with an introductory voice-over, in which Clooney's Ryan outlines his own private way of the Samurai: "To know me is to fly with me. This is where I live." During the course of the movie, Ryan will sail breezily through airport security checks, offering us tips for doing the same: Avoid getting in line behind old people and couples with children; look for the Japanese guys, who travel light and wear slip-on shoes. ("I'm like my mother, I stereotype -- it's faster," Ryan explains plainly.) Ryan spends most of his days in faceless hotel rooms; the few weeks per year he's not in a faceless hotel room, he's at home, and miserable, in his faceless Omaha apartment. He's happiest on the road, and it's easy to see why: Flight attendants and ticket-counter workers greet him by name; the women purr at him flirtatiously, like time-travel babes lost on their way to an old Hai Karate commercial. As Ryan glides and hops from here to there, mischievous, '60s-flavored bongo music sneaks its way onto the soundtrack, as if to suggest that Ryan is actually getting away with something.

And he is having all too much fun in his life of emptiness, which means he'll have to face a crisis tied to the impending marriage of his younger sister (played by Melanie Lynskey), a sweet Wisconsin girl who's happy to settle for the little things in life (symbolized by her not-so-little sweater-wearing fiancé, played by Danny McBride). Ryan will also have to replace his typical one-night stands with a long-term romantic connection, possibly with Alex (Vera Farmiga), a vixenish fellow traveler whose allure he can't resist. (They meet cute, slapping their various premium-member quadruple-platinum credit cards on an airport-lounge cocktail table with the gusto of schoolboys comparing baseball-card collections.) And Ryan will teach some valuable lessons to, but will also learn from, Natalie (Anna Kendrick), an ambitious and annoying young whippersnapper who's stepped in to revamp the company Ryan works for.

Kirn's book isn't so big on the life lessons; it's much colder than this adaptation (which Reitman wrote with Sheldon Turner), but it's also more raw. "Up in the Air" bears a strong resemblance to Reitman's first picture, the nowheresville satire "Thank You for Smoking," a movie so packed with knowing understatement that it ended up saying nothing whatsoever. And it's far less direct (and, I'd say, less heartfelt) than Reitman's last picture, the love-it-or-hate-it "Juno." I happen to love "Juno," although I can understand people's exasperation with it. "Up in the Air" doesn't even risk that degree of frustration: Any potential bumps or irritations have been smoothed over; the picture glides right by, a zoned-out, turbulence-free ride.

The performances are similarly inoffensive, to the point of being occasionally enjoyable. Farmiga is far less actressy than usual, a relaxed, unself-consciously amusing presence: When I first saw her, perched on a bar stool in a silky blouse, I half-expected her to start purring like a kitten -- it's a great entrance. Kendrick (perhaps best known as one of Bella's sidekicks in the "Twilight" movies), as the ambitious upstart, is scarily wonderful: Half the time you want to kick her character, proof that Kendrick knows exactly what she's doing. And Clooney is, well, Clooney: As always, he's as silky as a pocket square (an accoutrement that, by the way, the no-frills Ryan wouldn't be caught dead in). Clooney is a marvelous actor and a great salesman -- in short, he's a movie star, and hallelujah for that. He's so cashmere-casual here, he can almost make you forget how canned the language is.

But there are no great depths for Clooney to plumb here, no matter how many thoughtful layers Reitman thinks he's built into the script. I had the misfortune of watching "Up in the Air" with a mad texter in the seat next to me, a person who couldn't stop checking her phone for messages. Sometimes it's not even the light from the device that disturbs me -- it's more the vibrations of distraction and fidgety detachment that drive me nuts. But I'm afraid "Up in the Air" is the perfect movie-texter's movie: No problem if you need to look away from the screen for 30 seconds to put the finishing touches on your evening's entertainment plans -- you'll barely miss a niblet! Just pick up where you left off and move on.

That's easy enough to do with a movie that's broken up into so many individually wrapped bits. Reitman closes the movie with a set of on-camera testimonies from those real-life terminated employees. They speak of how being fired changed their lives, giving them a "sense of purpose," making them realize the importance of "friends and family."

What Reitman doesn't seem to get is that these real-world testimonies are only a half-twist away from the slickster line of goods -- "Losing your job is the best thing for you. Really!" -- that Ryan's character specializes in. When Ryan is spouting these prefab pearls of wisdom, they're treacherous falsehoods; when real people use them to make the best of a bad situation, they're enlightenment. Reitman can't even see the condescension in that. By putting these faces in front of us -- faces of people who have, most likely, suffered through some pretty rough times in real life -- he isn't making a grand statement about the precarious world we live in; he's turning the misfortunes of others into a gimmick, a convenient hook on which to hang his movie. That makes him less honorable than his smooth-talking, high-flying antihero. At least Ryan Bingham knows he's selling us a line of bull.

Movies Up In The Air