Why is the Obama DOJ attempting to block judicial review of three highly suspicious deaths? 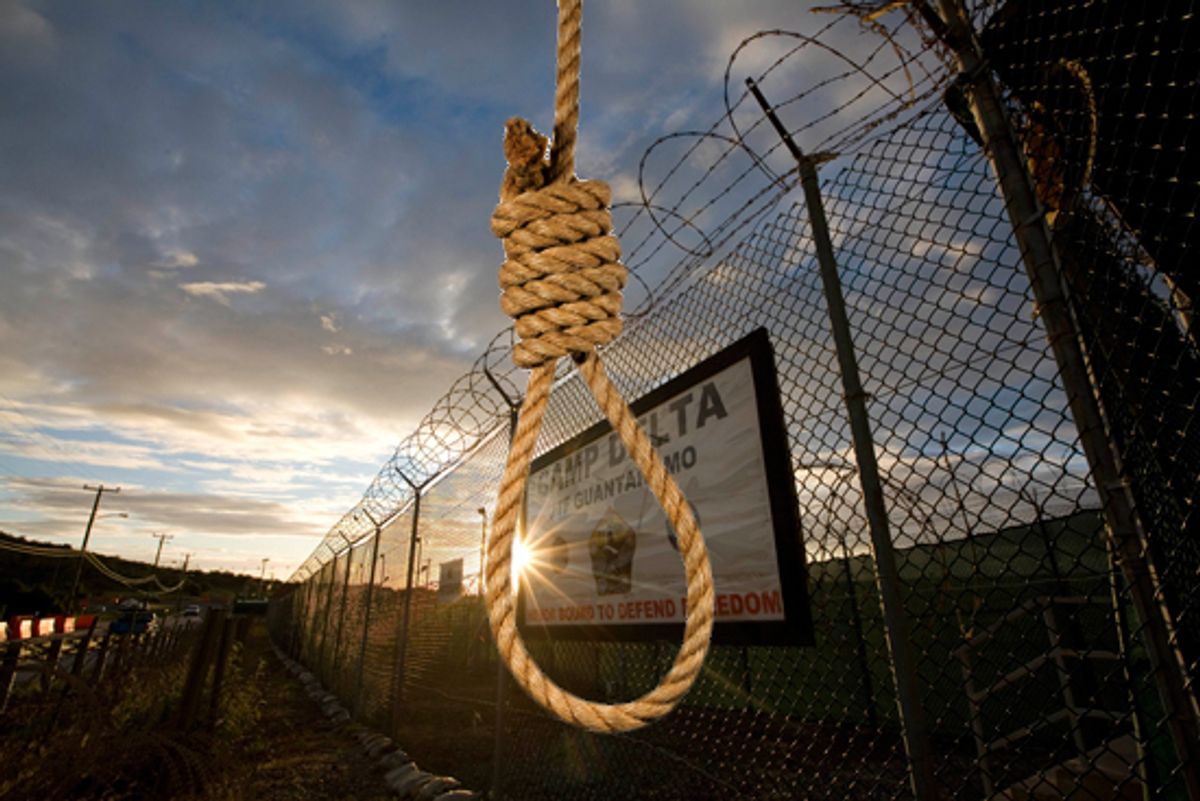 The Guantanamo detention facility at the U.S. Naval Base in Guantanamo Bay, Cuba, Tuesday, Nov. 18, 2008
--

On the night of June 10, 2006, three Guantanamo detainees were found dead in their individual cells.  Without any autopsy or investigation, U.S. military officials proclaimed "suicide by hanging" as the cause of each death, and immediately sought to exploit the episode as proof of the evil of the detainees.  Admiral Harry Harris, the camp's commander, said it showed "they have no regard for life" and that the suicides were "not an act of desperation, but an act of asymmetric warfare aimed at us here at Guantanamo"; another official anonymously said that the suicides showed the victims were "committed jihadists [who] will do anything they can to advance their cause," while another sneered that "it was a good PR move to draw attention."

Questions immediately arose about how it could be possible that three detainees kept in isolation and under constant and intense monitoring could have coordinated and then carried out group suicide without detection, particularly since the military claimed their bodies were not found for over two hours after their deaths.  But from the beginning, there was a clear attempt on the part of Guantanamo officials to prevent any outside investigation of this incident.  To allay the questions that quickly emerged, the military announced it would conduct a sweeping investigation and publicly release its finding, but it did not do so until more than two years later when -- in August, 2008 -- it released a heavily redacted reported purporting to confirm suicide by hanging as the cause.  Two of the three dead detainees were Saudis and one was Yemeni; they had been detained for years without charges; one of them was 17 years old at the time he was detained and 22 when he died; and they had participated in several of the hunger strikes at the camp to protest the brutality, torture and abuse to which they were routinely subjected.  Perversely, one of the three victims had been cleared for release earlier that month.

A major new report from Seton Hall University School of Law released this morning raises serious doubts about both the military's version of events and the reliability of its investigation.  The Report details that the three men "died under questionable circumstances"; that "the investigation into their deaths resulted in more questions than answers"; and that "without a proper investigation, it is impossible to determine the circumstances of the three detainees' deaths."  The 54-page, heavily-documented Report raises numerous troubling questions, as illustrated by these (click images to enlarge):

There is one way that a meaningful investigation could be conducted into what happened to these three detainees:  a lawsuit filed in federal court by the parents of two of the detainees against various Bush officials for the torture and deaths of their sons -- who had never been charged with, let alone convicted of, any wrongdoing (indeed, one had been cleared for release).  By itself, discovery in that lawsuit would shed critical light on what was done to these detainees and what caused their deaths.

The problem, however, is that the Obama DOJ has been using every Bush tactic -- and inventing whole new ones -- to block the lawsuit from proceeding.  As The Washington Independent's Daphne Eviatar detailed in October, "the Obama administration has surprisingly endorsed the same legal positions as its predecessor, insisting that there is no constitutional right to humane treatment by U.S. authorities outside the United States, and that victims of torture and abuse and their survivors have no right to compensation or even an acknowledgment of what occurred."  As Eviatar wrote about the Obama position, which -- among other things -- invokes the Military Commissions Act to argue that Congress stripped federal courts of jurisdiction to hear even Constitutional claims from Gitmo detainees:

The Obama administration is insisting, however, that Congress had the power to eliminate judicial review of these claims. It also argues that the Defense Department officials are immune from suit, because, as the Bush Justice Department argued in previous cases, it wasn’t clear at the time that detainees had a right not to be tortured by U.S. officials at Guantanamo. They therefore have "qualified immunity" from suit.

But the Justice Department goes further than that. Under President Obama, the government is arguing not only that it wasn’t clear what rights detainees were entitled to back in 2006, but that even today the prisoners have no right to such basic constitutional protections as due process of law or the right to be free from cruel and unusual punishment. The "Fifth and Eighth Amendments do not extend to Guantánamo Bay detainees," writes the Justice Department in its brief.

And, the government argues, the courts should not imply a right to sue under the Constitution, in part because that could lead to "embarrassment of our government abroad."

Ultimately, the Obama administration is arguing, victims of torture at a U.S.-run detention center abroad have no right to redress from the federal government. Only the military can take action in such cases, by disciplining military officers for abuse of prisoners.

In fact, the Brief filed by the Obama DOJ demanding dismissal of the case explicitly argues -- in classic Bush/Cheney fashion -- that merely allowing discovery in this case to determine what was done to these detainees would help the Terrorists kill us all:

All of this is depressingly consistent with multiple other cases in which the Obama DOJ is attempting aggressively to shield even the most illegal and allegedly discontinued Bush programs from judicial review.  Time and again, the most radical Bush claims of executive power, immunity and secrecy (ones Democrats and even Obama frequently condemned) are invoked to insist that federal courts have no right to adjudicate claims that the Government violated the Constitution and the law.  As Harper's Scott Horton documented over the weekend, a new filing by the Obama DOJ in defense of John Yoo is "seeking to make absolute the immunity granted Justice Department lawyers who counsel torture, disappearings, and other crimes against humanity."  In other words, as we lecture the world about the need for them to apply the rule of law and hold war criminals accountable, we simultaneously proclaim about ourselves:

We can kidnap your sons from anywhere in the world, far away from any "battlefield," ship them thousands of miles away to an island-prison, abuse and torture them mercilessly, and when we either drive them to suicide or kill them, you have no right to any legal remedy or even any recourse to find out what happened.

As Horton writes, the claim that government officials enjoy a virtually impenetrable shield of immunity even in the commission of war crimes "has emerged as a sort of ignoble mantra for the Justice Department, uniting both the Bush and Obama administrations."   Indeed, that is the common strain of virtually every act undertaken by the Obama DOJ with regard to our government's war crimes and other felonies, from torture to renditions to illegal eavesdropping.

With revelations of serious, recent abuse at an ongoing "black site" prison in Afghanistan, serious questions have been raised about the extent to which detainee abuse has actually been curbed under Obama.  But there's no question that the single greatest impediment to disclosure and accountability for past abuses is the Obama Justice Department, which has repeatedly gone far beyond the call of duty in its attempt to protect Bush war crimes and other illegal acts.  This new Seton Hall Report regarding these three detainees deaths illustrates not only how perverse and unjust, but also how futile, such efforts are.  War crimes never stay hidden, and the only question from the start was whether the Obama DOJ would be complicit in the attempt to shield them from disclosure.  That question has now been answered rather decisively.

UPDATE:  Scott Horton has an interview with Law Professor Mark Denbeaux, the primary author of the report, in which he elaborates on why the military's claims and "investigation" are so suspect.