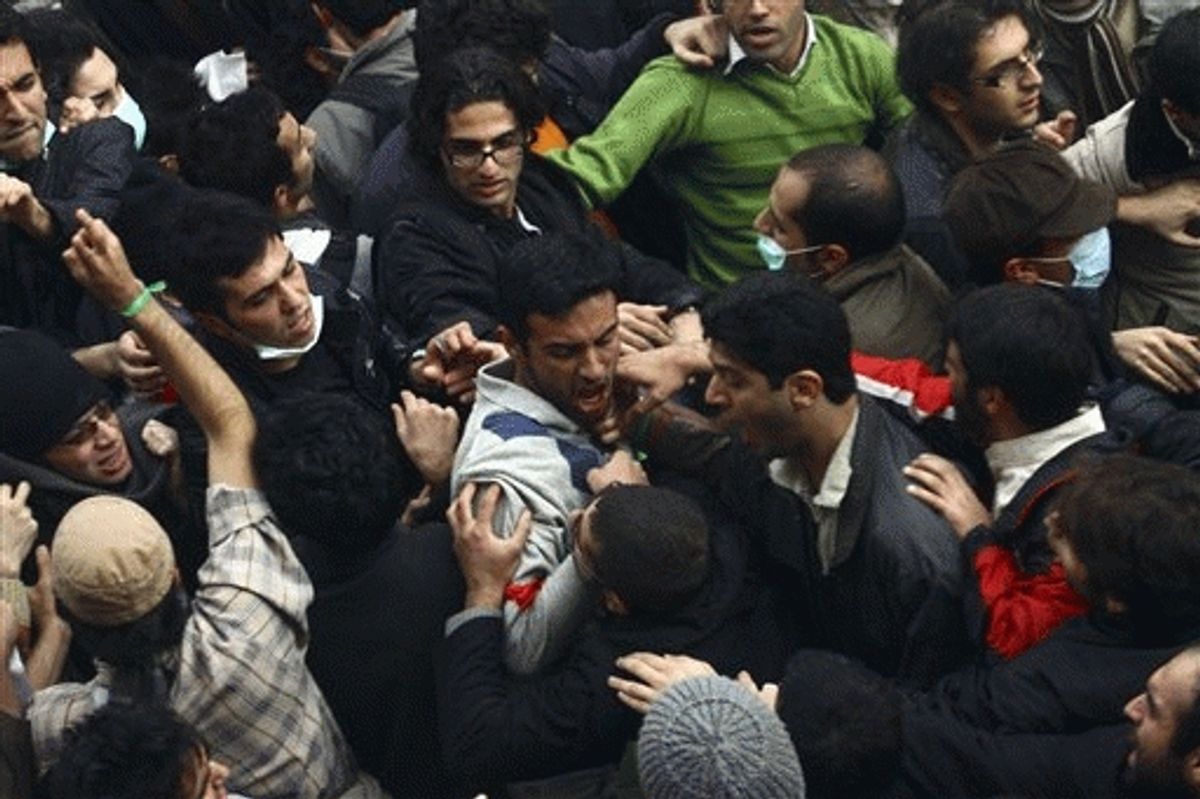 The protests against the regime in Iran on Monday were remarkable in several ways, I conclude on reading Borzou Daragahi's account in the Los Angeles Times. One is the sheer number of cities where students came out for rallies: "Esfahan, Shiraz and Kerman, in the eastern city of Mashhad and in the western cities of Tabriz, Kermanshah, Hamedan and Ilam as well as in Rasht on the Caspian Sea."

Another is that Iranian Kurds joined in the protests in Sanandaj and other cities, throwing a scare into the regime, which is said to be sending armored vehicles to help restore order. Iranian Kurdish dissidents have been targeted by the regime for harsh treatment in recent months. The rise of a semi-independent Kurdistan in northern Iraq has increased worries in Tehran about Kurdish separatism. It is alleged that PEJAK, the Iranian-Kurdish guerrilla group, has carried operations against the regime with U.S. encouragement.

Protesters chanted "Death to the dictator," attacked Supreme Leader Ali Khamenei and Mahmoud Ahmadinejad for destroying the country, and burned photos of Khamenei. The AP says, "Opposition leader Mir Hossein Mousavi declared the clerical establishment was losing legitimacy in the eyes of Iranians. 'A great nation would not stay silent when some confiscate its vote,' said Mousavi, who claims to be the real winner of the June 12 election."

Monday's rallies were bigger than the ones of November 4 and these protests are the largest since last summer.

Basij paramilitary intervened on motorcycles with batons. The regime used tear gas to dispersed the crowds, and some protesters were beaten. Reports of killings by the police have not been verified.

CBS has video on the university protests:

This Kurdistan site has audio of student protests and shots ringing out, with a slide show of dramatic still photos overlaid.

For the scene outside the capital, here is raw video of student protests in Kerman. The students are chanting "Freedom, Freedom, Freedom! God is Most Great!"

The USG Open Source Center translates an article on the conciliatory suggestions of Ayatollah Naser Makarem-Shirazi:

Iran: Senior Ayatollah Calls For "Truce And Then A Ceasefire"

Tehran Iranian Students News Agency in Persian at 1129 GMT on 7 December carried the text of an interview with Ayatollah Naser Makarem-Shirazi, senior cleric and member of the Assembly of Experts, published on Jamaran News website on 3 December on the anniversary of the passing of the Islamic Republic constitution.

In the interview, the ayatollah was asked to comment on the unrest and arrests that followed Iran's presidential elections in June 2009. Makarem-Shirazi urged the two sides to negotiate a truce and then a ceasefire.

"Wherever there is war, a peace treaty is not suddenly achieved. They should introduce a truce first and then after a while when the tensions settle, they hold negotiations in a calm environment. I believe that a truce should be worked out. If we want to reach unity, there is a strategy for it.

"When we talk about unity, we are talking about people who believe in the constitution, leadership, Islam, and the interests of the country. Those who believe in those issues can reach unity. However, the precondition is to create a calm environment and then some people, who are respected by society and are moderate thinkers, should agree on the principles of unity. I do not believe that we have reached the end of the road, there is no deadlock.

"I have worked out a few principles but cannot discuss them under the current circumstances. If a calm atmosphere is created and if some people step forward to reach unity, then I will pronounce my views, too. I believe we can reach unity.

"I have repeatedly said that there were a few rioters who should be dealt with separately. However, a large number of people formed the majority in the elections and another large number of people the minority. We should create understanding between the two groups. After all they are 13-14m people who live in this country and the 24-25m people (referring to pro-President Mahmud Ahmadinezhad voters) live in this country, too. In other countries, figures less than these are cared for and governments negotiate with two-three million people.

We should sit together and negotiate and the precondition to that is the creation of a calm atmosphere."

Elsewhere in his interview, Makarem-Shirazi alluded to President Ahmadinezhad's recent threats that he might refuse to implement the economic reform plan, saying: "Many people, whether lower-class citizens or the elite, evade the law. They circumvent the law whenever they find it goes against their will and this can create many problems in society. If we respect the law, even if against us, it will be in the interest of everyone. If the law is dishonoured, anarchy will prevail. If everyone breaks the law because it is against their interest, then nothing will remain.

"If the president of a country says that he will not enforce a law approved by parliament, then the meaning of that action is that the parliament has no position in society. We should negotiate and even if we do not reach an agreement, we should respect the law."

(Description of Source: Tehran Iranian Students News Agency in Persian -- University student press agency; produces politically moderate reporting with emphasis on student activities. It is partially funded by the University Jihad, a state-backed student organization. In November 2007, Mehr News Agency reported that Jamal Rahimian, a lecturer in law and a member of Tehran University's School of law and Political Science, and the deputy head of University Jihad in charge of cultural affairs in Tehran would be ISNA's new head, taking over from Mir Hamid Hasanzadeh; URL: http://www.isna.ir)