My friend the president 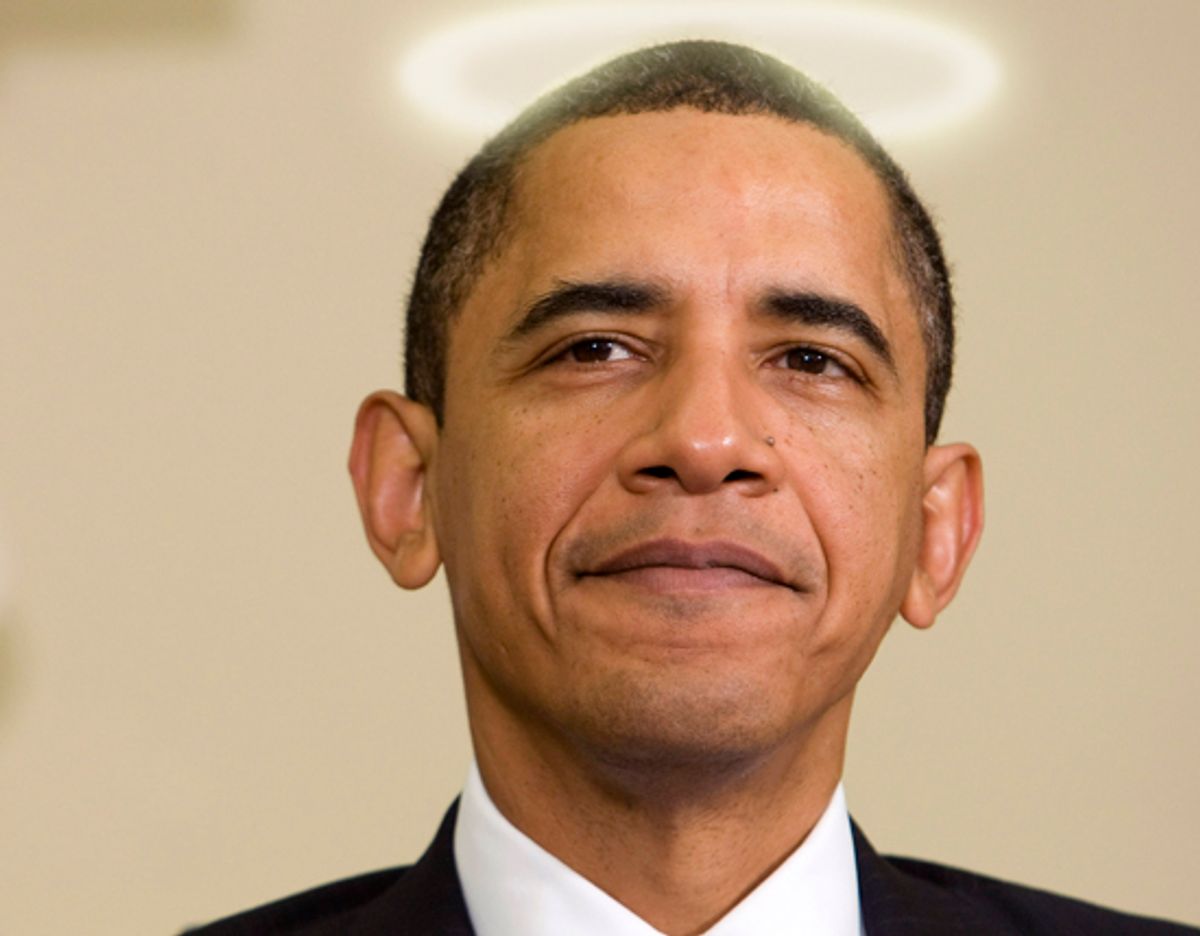 Over the past couple of days, Andrew Sullivan has linked to and published protests from various individuals who are quite angry that people "on the left" are being so mean to President Obama, and several of them are so upset that they have decided they are "leaving the left," whatever that might mean.  What's most striking about these valiant defenses of Obama is how utterly devoid they are of any substantive points and how, instead, suffuse with weird, even inappropriate, emotional attachments they are.  These objections are grounded almost exclusively in (a) a deep-seated conviction that President Obama is a good and just man who means well; (b) their own rather intense upset at seeing him criticized; and (c) a spitting ad hominem fury of the type long directed by Bush followers at any critics of their leader, and generally typical of authoritarian attacks on out-groups critics.  Just marvel at some of this:

Thank goodness people are starting to leave the left. Their abandonment of Obama is as unconscionable as the right's refusal to work with him. . . . This is about decency and working together to solve problems. . . . Obama is almost solitary in his desire and ability to tackle problems of epic proportion while realizing that we live in a very heterogeneous society. . . . The loud-mouths on the Left are becoming nearly as hysterical and vicious as those on the right. . . . I marvel (unhappily) on a daily basis on how myopic and stubborn many of those on the left have become in regards to President Obama. I wonder if any of these people have ever truly had to make hard decisions in their lives. Have they not ever had to weigh all consequences?. . . . These are real choices people, not a schoolyard fantasy, in which our guy, king of the geeks, is finally captain of the kickball team, and now he can pick us fellow geeks and play us all in sweet revenge against the jocks. He is not playing. He is leading. Not even one year in, I am willing to continue to trust his instinct, his grace, his patience and his measured hand. . . .These are the reasons I voted for him. Hope for a leader, not hope for "everything to be completely different from the previous guy regardless of the consequences", which is what I think many immature democrats are upset about. What a bunch of selfish babies. . . . The stuff coming out of "progressive" mouths is all too often on a par with Glenn Beck's abusive rants--both sides (right and left wingers) playing thousand-pound national football with the President as the ball--meaning, kick kick kick, until you bust his dick.  This truly makes me sick.

These outbursts include everything other than arguments addressed to the only question that matters:  are the criticisms that have been voiced about Obama valid?  Has he appointed financial officials who have largely served the agenda of the Wall Street and industry interests that funded his campaign?  Has he embraced many of the Bush/Cheney executive power and secrecy abuses which Democrats once railed against -- from state secrets to indefinite detention to renditions and military commissions?  Has he actively sought to protect from accountability and disclosure a whole slew of Bush crimes?  Did he secretly a negotiate a deal with the pharmaceutical industry after promising repeatedly that all negotiations over health care would take place out in the open, even on C-SPAN?  Are the criticisms of his escalation of the war in Afghanistan valid, and are his arguments in its favor redolent of the ones George Bush made to "surge" in Iraq or Lyndon Johnson made to escalate in Vietnam?   Is Bob Herbert right when he condemned Obama's detention policies as un-American and tyrannical, and warned:  "Policies that were wrong under George W. Bush are no less wrong because Barack Obama is in the White House"?

Who knows?  Who cares?  According to these defenders, it's just wrong -- morally, ethically and psychologically -- to criticize the President.  Thus, in lieu of any substantive engagement of these critiques are a slew of moronic Broderian cliches ("If Obama catches heat from the left and right but maintains the middle, he is doing what I hoped he would do (and what he said he would do) when I voted for him"), cringe-inducing proclamations of faith in his greatness ("I am willing to continue to trust his instinct, his grace, his patience and his measured hand"), and emotional contempt for his critics more extreme than one would expect from his own family members.  In other words, the Leave-Obama-Alone protestations posted by Sullivan are fairly representative of the genre.  How far we've fallen from the declaration of Thomas Jefferson:  "In questions of power, then, let no more be heard of confidence in man, but bind him down from mischief by the chains of the Constitution."

With regard to many of the above-referenced criticisms -- as well as ones I haven't included -- there are reasonable disputes over the validity of the critiques, and many Obama defenders voice those on substantive grounds.  Obama admirers like the ones featured above are a minority, albeit a vocal one.  But far too many have an emotional attachment to him and investment in him that is deeply unhealthy, particularly when it translates into intolerance for the very act of objecting to his decisions and policies, as one sees on vivid display in the responses Sullivan posted.

I recently watched this video -- posted below -- containing interviews with numerous individuals who attended a Sarah Palin book event in Ohio.  Most of them profess their deep respect and admiration for Palin even though they're barely able to defend a single substantive position she holds.  The video is clearly intended to depict Palin supporters as some sort of uniquely ignorant and vacuous fan club devotees more appropriate for a movie star than a politician.

Indeed, at first, I was mesmerized by the video.  After all, these were not just random, politically apathetic people selected off the street.  They are politically interested and engaged enough to spend hours waiting to see Sarah Palin.  They have deep convictions about politics and overwhelming faith in her judgment and abilities.  And yet they have virtually no ability to justify any of her specific views on issues.  They don't really care about those.  What they know is that she's a culturally familiar and admirable person.  They share her values and know she's a good person, and thus trust that she will "do the right thing" on specific issues regardless of whether they agree or even understand what she's doing.  They have a personal connection with her that makes them place their faith in her.

After watching slack-jawed for a few minutes, I quickly realized that there was nothing unusual at all about their reaction to Palin.  This was exactly what led so many Bush followers to defend him no matter what he did -- as he tortured and invaded without cause and chronically broke the law.  He was, like most of them, a "good Christian" who had a nice family and meant well, and thus, while he might err, he was not capable of any truly bad or evil acts.  Anyone who criticized him too harshly or too viciously was, by definition, revealing something flawed about themselves.  None of the specific arguments mattered.  None of it had to do with reason.  Like Palin's admirers, Bush's were convinced of the core goodness of his character, and they thus loved him and hated those who suggested that there was something deeply wrong in what he was doing.

The similarity between that mentality and the one driving the Obama defenses posted by Sullivan is too self-evident to require any elaboration.  Those who venerated Bush because he was a morally upright and strong evangelical-warrior-family man and revere Palin as a common-sense Christian hockey mom are similar in kind to those whose reaction to Obama is dominated by their view of him as an inspiring, kind, sophisticated, soothing and mature intellectual.  These are personality types bolstered with sophisticated marketing techniques, not policies, governing approaches or ideologies.  But for those looking for some emotional attachment to a leader, rather than policies they believe are right, personality attachments are far more important.  They're also far more potent.  Loyalty grounded in admiration for character will inspire support regardless of policy, and will produce and sustain the fantasy that this is not a mere politician, but a person of deep importance to one's life who -- like a loved one or close friend or religious leader -- must be protected and defended at all costs.

UPDATE:  There is an important parallel between those who believe all criticism of Obama to be illegitimate and those on the Right who despise him without pause.  The latter is every bit as personality-driven as the former:  they despise Obama not for any specific policy decisions (often, those are aligned with their ostensible views), but because of personality caricatures they've adopted:  he's a narcissistic, vacant, Socialist Muslim and therefore nothing he does is right.  That is simply the opposite side of the same coin as those who revere his personality and thus believe that nothing he does merits real criticism.

That's unsurprising, given that many of the most vehement Obama-haters were the same ones who most loved Bush and now love Palin:  this is all about cultural identification and personality admiration and has nothing to do with the factors that ought to be used to judge political leaders.

UPDATE II:  Referencing this post, Talk Left's Armando writes:  "sometimes I support the President, sometimes I criticize him. Depends on whether he adopts policies I agree with or not."  What's most amazing is that that even needs to be said at all, that it's controversial, that it applies to a subset of the citizenry rather than . . . everyone.   From experience, I know that making a statement like that often provokes the borderline-creepy demand that evidence of one's praise for (or defenses of) Obama be offered, and no matter how much evidence is provided (see here, here, here, here, here, here, here, here, here and here -- just to cite a sampling), it's frequently met with the definitely creepy objection that the praise is impure because it was mixed with some critical commentary or, more commonly, that it's simply not enough.

One other note:  those who complain about Obama critics often point out that he's not a dictator and can only do what Congress permits.  That's true enough as far as it goes, but it does not go very far.  For instance, I've never criticized Obama for failing to meet his one-year deadline for closing Guantanamo because Congress imposed serious impediments that the White House opposed but could not stop, so that's hardly Obama's fault.  But virtually all of the policies for which I have criticized him are ones which, for better or worse, are within the discretion of the President to make, and nothing Congress has done has compelled Obama to embrace those policies.  That's true, for instance, of his reliance on state secrets, indefinite detention, military commission, renditions, escalation in Afghanistan, Wall-St.-subservient actions, and a whole slew of other policies on which Obama critics typically focus.