Rachel Maddow destroys anti-gay "researcher" Richard Cohen, but he was an easy target 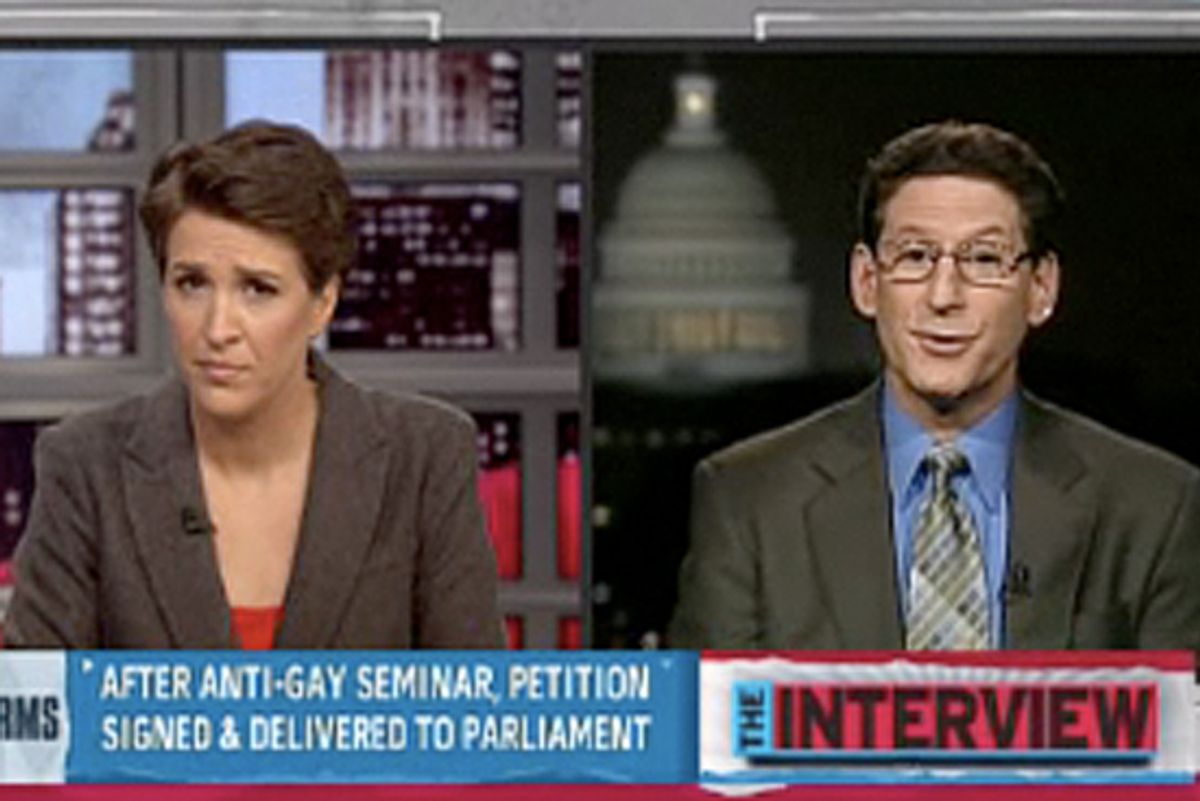 Rachel Maddow today is receiving well-deserved praise for a devastating interview she conducted last night with Richard Cohen, an "ex-homosexual" therapist who is head of the "International Healing Foundation," which purportedly helps gay people become straight.  Cohen's rancid slander against gay people (they're a threat to children, etc.), masquerading as "research," is being used by advocates of a proposed law in Uganda that would allow the state to execute homosexuals.  The 17-minute interview is worth watching if you want to see how an extremely smart and well-prepared interrogator can absolutely destroy a guest who is brazenly spouting baseless claims and patent falsehoods (the video is also posted below).

As superb and skillful as this demolition was, and as heinous as people like Richard Cohen are, I'm more impressed when relentlessly adversarial interviews like this are targeted at people who are genuinely powerful and well-regarded by our political establishment (as Rachel has done before).  When it's obscure, stigmatized nobodies who are subjected to this treatment -- easy targets -- I'm less moved.  After all, even Beltway power-worshiping sycophants like Chris Matthews have shown a willingness in the past to expose a guest's ignorance with relentless questioning to the point of humiliation -- as long as the guest was some obscure, fringe figure who had no real standing in the power circles Matthews reveres.  When numerous Democrats were heaping praise on Matthews for his destruction of one such right-wing guest during last year's election, Digby wrote:

Let's just say that I'd be a lot more impressed with Matthews' pitbull routine if he used it, just once, on somebody with some real clout instead of low level nobodies who don't appear on TV regularly. Bullying people without power just doesn't impress me much, especially when you have people on the show every day who actually have some and you kiss their asses with gusto. Sorry, not impressed.

If you watch a typical establishment television reporter conduct an interview with someone who is already marginalized and despised by All Decent People, you'll often see them suddenly become very aggressive and scrutinizing in a way that they would never dare do if they were interviewing a top political official or respected Washington Wise Man.

This isn't remotely a criticism of Rachel; she's an exception to this rule, as I've seen her conduct equally relentless interviews with people like Tom Ridge, and she frequently extends invitations to even powerful people whom she criticizes (they typically decline).  Moreover, people like Richard Cohen are truly pernicious and urgently need to be exposed with the treatment to which Rachel subjected him; he actually deserves worse.  The point in which I'm interested here is how rare it is for interviews like this to be conducted by establishment journalists with people who have real power.  Could one even imagine, for instance, Tim Russert's having questioned Dick Cheney this way prior to the Iraq war, or any of the standard array of pompous, blowhard Senators being treated to an interview like this by any standard Sunday morning TV host?

One can watch what Rachel did in last night's interview -- what made it so effective -- to see why this virtually never happens on, say, Sunday shows when politically powerful people who interviewed:

(1) Rachel had obviously done a substantial amount of work prior to the interview, having even read the guest's books and being able to refer to various parts of them quickly; doing real work and real reading is far too burdensome for most of our coddled, vapid media stars.

(2) Rachel, despite being unfailingly civil and polite, was obviously indifferent to whether the guest liked her.  She bombarded him with questions that made him extremely uncomfortable and which conclusively proved that he was simply lying.  Media stars who host political interview programs would never subject powerful people to treatment like that for fear of losing access and/or their standing in the Beltway world.

(3) Rather than treat the guest and his claims as entitled to respect and deference, Rachel explicitly pointed out when he was lying, and even more important, demanded that he accept responsibility for his conduct (she told him he has "blood on his hands" for the role he is playing in enabling Uganda's oppression, and possibly execution, of gay people).  It's simply impossible to imagine a Sunday morning media star telling, say, an advocate of the Iraq War that they have "blood on their hands," or explaining that those who advocated torture are "war criminals."  Words like that are disrespectful and thus strictly prohibited when journalists deal with our elites.  Sunday-morning media star journalists are there to obfuscate and elevate elite crimes, not expose them and certainly not describe them as such.

(4) Rachel's guest last night was modestly smart, coy and well-prepared, and pinning him down this way was not an easy task.  Rachel was able to demolish his statements only because she is extremely smart, intellectually quick and dexterous, and able to think critically on the spot.  To put it as politely as possible, people like David Gregory or, say, Brian Williams and John King  don't exactly have those instruments at their disposal.  That deprivation is a major reason why they're selected for those positions.

Just imagine how much better things could be if our political leaders were routinely subjected to the kind of surgically probing, lie-exposing interrogation which Rachel imposed on her homosexual-converter guest.  But the reasons they almost never are speak volumes about our media stars and their true function.

UPDATE:  Several people, in comments and via email, have irresponsibly suggested -- or even outright asserted -- that there is something sexist about my use of "Rachel," as contrasted with the last names of the males discussed here.  I say this claim is "irresponsible" because, while I understand where this is coming from, just a few moments of research -- which ought to be a prerequisite before accusations like that are made -- would have made conclusively clear how false that suggestion is.  I've compiled just a sampling of that evidence here (see first comment).