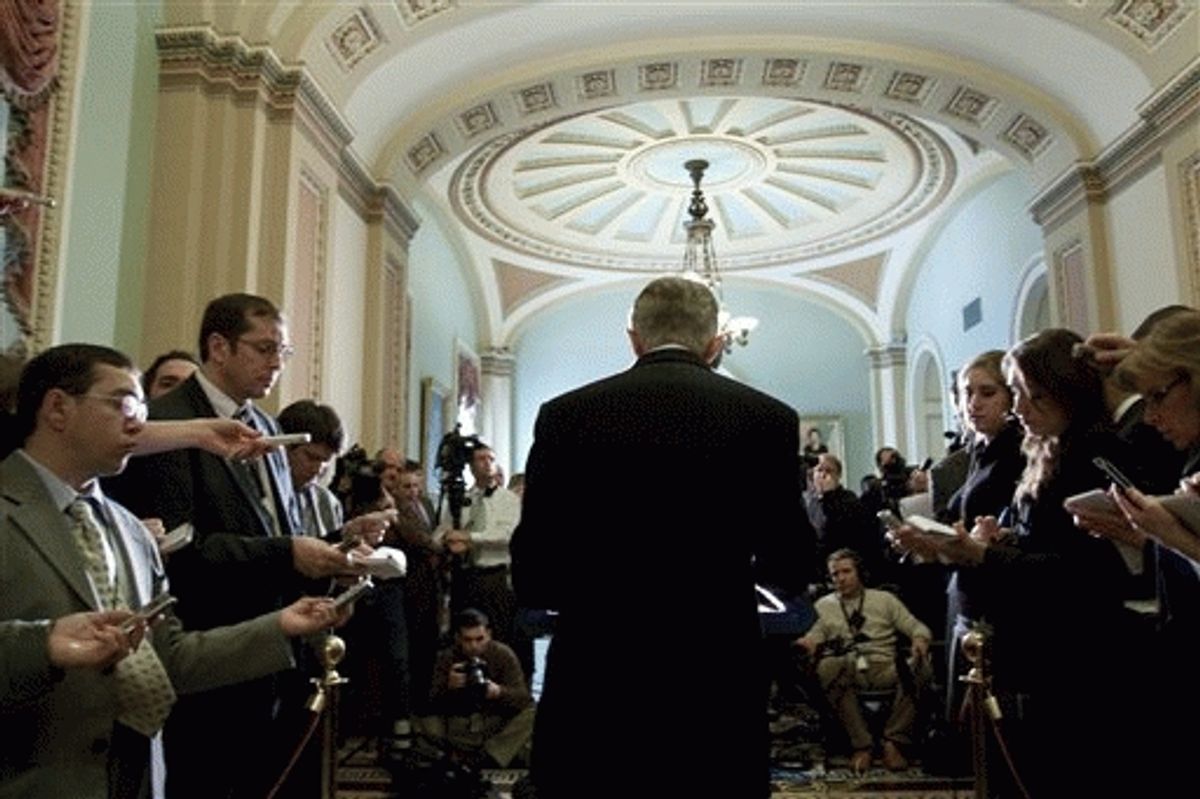 After agreeing tentatively to jettison a key liberal priority -- a full-blown government-run insurance option -- Democrats say they are getting close to pushing President Barack Obama's health care bill through the Senate.

"We've overcome a real problem that we had," Majority Leader Harry Reid, D-Nev., said in announcing what he called a "broad agreement" Tuesday night.

Officials said it included nonprofit national health plans administered by the Office of Personnel Management, which runs the popular federal employees' health plan, as well as opening Medicare to uninsured Americans beginning at age 55, effective in 2011.

Greater government involvement would potentially kick in if private insurance companies declined to participate in the nationwide plan, although details weren't available. One possibility was for the personnel office to set up a government-run plan, either national in scope or on a state-by-state basis.

"I think when people see this they'll really like what we've done," said Sen. Mark Pryor, D-Ark., who was among five moderate senators who spent several days negotiating with five liberals. Reid planned to describe the plan in greater detail after getting an analysis from the Congressional Budget Office.

The White House weighed in quickly with a statement from spokesman Reid Cherlin. "Senators are making great progress and we're pleased that they're working together to find common ground toward options that increase choice and competition," he said.

The Senate is in its second week of debate on the 10-year, nearly $1 trillion legislation that would dramatically remake the U.S. health care system and extend coverage to millions of the uninsured, with a new requirement for nearly everyone to purchase insurance. New purchasing marketplaces called exchanges would make it easier for small businesses and people without government or employer coverage to shop for health insurance, and onerous insurance company practices such as denying coverage to people with pre-existing medical conditions would be banned.

The deal reached Tuesday puts even more requirements on insurers by requiring that 90 percent of premium dollars be spent on medical benefits, as opposed to administrative costs, officials said. The officials who described the details of the closed-door negotiations did so on condition of anonymity, saying they were not authorized to discuss them publicly.

Reid wants action on the health bill done by Christmas but more challenges lie ahead. On Wednesday, senators expected to debate an amendment by Sen. Byron Dorgan, D-N.D., to legalize the importation of prescription drugs from Canada and several other countries as a way of holding down consumer costs. The idea enjoys widespread support but is opposed by the pharmaceutical industry, which has worked closely with the administration on health care and has spent millions of dollars on television advertisements in support of legislation.

The Food and Drug Administration issued a letter saying it would be "logistically challenging" to assure the safety of imported drugs, raising concerns without stating outright opposition.

Underscoring the heated emotions surrounding the government insurance plan, Reid refused to acknowledge its demise, contending that reports it was gone were "not true."

It wasn't clear what he meant by a "public option" -- the Medicare expansion or another element.

Either way, it's a far cry from what liberals had in mind when they envisioned the government competing directly with private insurers to offer health coverage to uninsured or self-employed Americans.

Even though the government plan would have been available to relatively few people, it took on outsize importance in the health care debate. Liberal groups clamored for it as necessary to offer consumers choice and competition, while Republicans and business groups -- and critically, a bloc of moderate senators -- contended it could mushroom out of control and drive private companies out of business.

In the end, dropping it was the price Reid had to pay for potential support from senators like moderate Blanche Lincoln, D-Ark., and Joe Lieberman, a Connecticut independent. Reid must have the support of all 58 Senate Democrats and two independents to achieve the necessary 60 votes to overcome Republican stalling tactics and advance legislation, giving great influence to the handful of moderates opposed to the government insurance plan.

Reid already faced the prospect of losing moderate Democratic Sen. Ben Nelson, D-Neb., who said his support was in question after the failure of an amendment he offered Tuesday to insert tougher abortion restrictions into the legislation. The vote was 54-45.

The health legislation passed by the House last month includes the tougher abortion language as well as a government insurance plan; those differences would have to be resolved, assuming the Senate passes its bill.