A British investigation reveals embarrassing details of just how knowingly false was the pre-Iraq hysteria.

The British are conducting an actual public investigation into the litany of false claims made by their government to justify the attack on Iraq.  Even for those who have long known it, the disclosures are underscoring just how truly criminal this deceit was:

An Iraqi taxi driver may have been the source of the discredited claim that Saddam Hussein could unleash weapons of mass destruction within 45 minutes, a Tory MP claimed today.

The 45-minute claim was a key feature of the dossier about Iraq's weapons of mass destruction that was released by Tony Blair in September 2002. Blair published the information to bolster public support for war.

Other disclosures reveal that Blair was making claims that his own intelligence services were vehemently rejecting.  For all the discussion about what happened in the run-up to that war, we still have not, in my view, come close to appreciating the historic magnitude of the evil of this crime -- and, of course, there have been no consequences for anyone responsible.  It's always worthwhile -- and still startling -- to look back and see how blatantly false claims such as Blair's taxi-derived "45-minute" assertion were pervasively and uncritically exploited to justify this war:

SIMON: And what's your feeling for whether or not he can get any of these weapons off?

Mr. CHIPMAN: Well, all the intelligence reports before the conflict were that he would be able within 45 minutes of a command to launch a chemical munition from artillery shells and that he has the devices to spray biological agents should the command be given and followed.

The British know this. In a chilling report released just recently, they described Iraq's large, effective system for concealing proscribed materials, including dual-use facilities and hiding spots that are located close to roads and telecommunications so that illicit items can be moved on short notice. Indeed, the British reported that Iraq can get WMD ready for use within 45 minutes of Saddam's orders. President Bush has been consistent in asserting that further deceptions by Saddam will not be tolerated. If the administration failed to act now, it would not only let Saddam off the hook but allow him to accumulate funds from oil sales to buy or build a still-greater WMD arsenal. And, it would ruin American credibility in the Muslim world. . .

Not only does the sheer size of the submission promote suspicions, the Bush administration last week said that it has a "solid basis" for asserting Iraq still has forbidden weapons. A chilling British government report in September detailed suspected continuing chemical and biological weapons programs, plans to activate them within 45 minutes and possible efforts to build nuclear weapons.

British and U.S. intelligence officials believe Saddam Hussein has continued to produce a variety of chemical and biological agents with at least some of those weapons capable of being deployed in as little as 45 minutes.

Most remarkably, hours after Blair argued that Iraq could deploy chemical or biological weapons within 45 minutes of an order to use them, French President Jacques Chirac questioned whether Iraq had any proscribed weapons at all. . . . Even worse, unmovic is bound by two "memoranda of understanding" (MOU) negotiated between Baghdad and the U.N. that would serve Saddam well if inspectors return. . . . And it's not just unmovic's rules that worry some Bushies, especially the hawks. It's Blix himself. "Blix is awful," says a top State Department official.

One can go on and on with that.  One of the worst retroactive, self-justifying lies told about this time period by those who did these things is that they had no reasons to question the false claims they were disseminating because "everyone" believed them and nobody disputed them.  To see how false that is, consider the March 17, 2003 Der Spiegel Editorial warning that "for months now, Bush and Blair have been busy blowing up, exaggerating and deliberately over-interpreting intelligence information and rumours to justify war on Iraq."  It specifically mocked the 45-minute claim. Or see the September 30, 2002 McClatchy article by Strobel, Landsay and Hutchinson -- headlined:  "War talk fogged by lingering questions; Threat Hussein poses is unclear to experts" -- which warned:  "those reports appear to be far from confirmed."  Or see the various statements by Scott Ritter ("The truth of the matter is that Iraq has not been shown to possess weapons of mass destruction, either in terms of having retained prohibited capability from the past, or by seeking to re-acquire such capability today") or Howard Dean ("Secretary Powell's recent presentation at the UN showed the extent to which we have Iraq under an audio and visual microscope. Given that, I was impressed not by the vastness of evidence presented by the Secretary, but rather by its sketchiness").

The people who mindlessly passed on claims like Tony Blair's "45-minute" hysteria did it without regard to whether it was true.  At best, they didn't care.  They wanted the invasion and were willing to say anything to justify it.  The ones who were most unquestioning were "journalists" whose only ostensible function is to question -- see but a small sampling of examples above.  What's most remarkable about all of it is that virutally none has even acknowledged wrongdoing and none has suffered any consequences of any kind.  This British investigation is underscoring just how extreme all of this was. 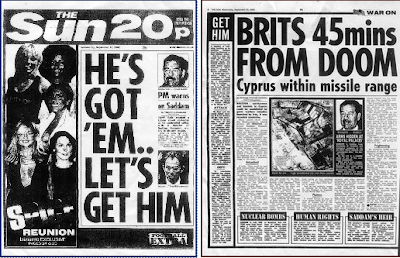 Schwarz provides some added background on how this claim was manufactured.  Atrios sums up the real point here:  "A conservative estimate is that 100,000 people have died as a result of the invasion of Iraq.  Do any of our elite media people feel any remorse at all?"  I believe "no" could be classified as a "simple answer to a simple question."