Obama gets real in Afghanistan

For all the ambiguity of his new policy, he is admitting that U.S. power has limits and priorities 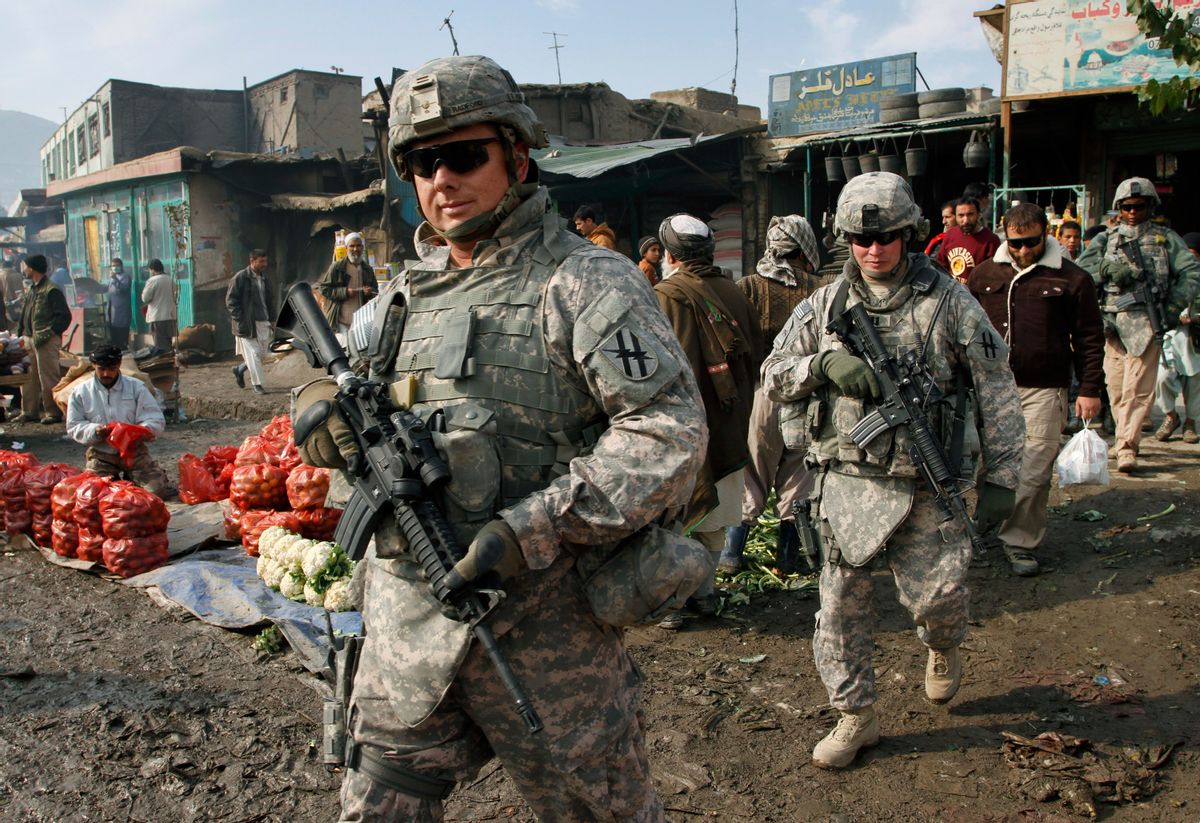 U.S. soldiers patrol through the heart of Kabul, Afghanistan on Wednesday, Dec. 2, 2009. Many Afghans were still sleeping when President Barack Obama announced he was sending 30,000 more U.S. troops to the war. Gen. Stanley McChrystal, the top U.S. commander in Afghanistan, said NATO and U.S. forces would hand over responsibility for securing the country to the Afghan security forces "as rapidly as conditions allow." Obama said if conditions are right, U.S. troops could begin leaving Afghanistan in 18 months. (AP Photo/Musadeq Sadeq) (Associated Press)
--

So our cerebral president has decided that the way out of Afghanistan is to plunge in further: 30,000 more U.S. soldiers, maybe 7,000 NATO troops, more bombs, more Predator missile strikes in the border regions of Pakistan and an 18-month timetable for commencing withdrawal. Or something.

Administration spokespeople were all over Washington making it perfectly clear that Obama's July 2011 target date couldn't be hazier. "I do not believe we have locked ourselves into leaving," Secretary of State Hillary Clinton told a congressional committee. She said the idea was to notify everybody on all sides that the United States has no long-term intention of occupying Afghanistan.

Meanwhile, Defense Secretary Robert Gates indicated that, depending on events, the target date could change. "We must not repeat the mistake of 1989 and turn our backs on these folks," he said, referring to U.S. neglect after the Russian retreat from Afghanistan that many believe led to the Taliban takeover.

According to CBS News, however, White House press spokesman Robert Gibbs said the president insisted the plan was "etched in stone. Gibbs said he even had the chisel." But of course that's a joke, so it's anybody's guess what it means. Calculated ambiguity, then, appears to be the point.

There was more of the same in lengthy, well-sourced, same-day articles in the New York Times and Washington Post describing President Obama's decision-making process. "Intense, methodical, rigorous, earnest and at times deeply frustrating for nearly all involved" was how the Times described it. "Mr. Obama," Peter Baker's account said, "peppered advisers with questions and showed an insatiable demand for information."

So the president's in charge. That's the first thing the White House wanted understood. Second, he inherited a terrible mess from his predecessor. "All of those in the room," the Post's version stressed, "were familiar with [Gen. Stanley] McChrystal's classified 66-page assessment of 'serious and deteriorating' conditions in Afghanistan, which made clear that 'we were starting from zero after eight years of war,' a civilian adviser said."

Third, Dick Cheney can just sit down and shut up. Campaign rhetoric aside, Obama pressed the generals for speeded-up deployments. Presented with a Pentagon plan that envisioned a gradual 18-month troop buildup, he reportedly emphasized to Gen. David Petraeus that "What I'm looking for is a surge. This has to be a surge."

Petraeus, of course, conceived and executed the vaunted 2007 "surge" in Iraq that's touted as the Bush administration's greatest (perhaps only) success in that misbegotten war. While the strategy's ultimate success won't be known until U.S. combat forces actually leave Iraq, it's seemingly made an orderly withdrawal possible, which appears to be all Obama hopes for in Afghanistan -- an interval of relative stability enabling the Karzai government to get its act together.

Or not, which is where things could get tricky. Reportedly, Gen. Petraeus cautioned Obama to think of the current Afghan government as essentially "a crime syndicate." That is, a hierarchical, semi-conspiratorial organization based on tribal and familial loyalties rather than abstract ideals of patriotism or public service -- basically the only way Afghan society has ever run, and realistically the only way it's going to function after Americans leave.

Something else Obama's team confronted was the impossibility of military victory. "Mr. Gates and others," the Times reported, "talked about the limits of the American ability to actually defeat the Taliban; they were an indigenous force in Afghan society, part of the political fabric." One may as well talk of driving Baptists out of Texas.

That said, anybody who imagined that this president -- any American president -- was going to abruptly pull out of a NATO action in Afghanistan, or to negotiate from a position of weakness, potentially leading to the spectacle of ragtag Taliban militiamen overrunning Kabul in beat-up Japanese pickup trucks and threatening a consequent reestablishment of al-Qaida bases there, simply isn't dealing with political reality, Afghan or American.

The success of Obama's plan further hinges on Pakistan's ability to confront jihadist elements on its side of the border. Essentially, the president is like a poker player trying to draw to an inside straight, gambling that his troop buildup can buy enough time to bribe Taliban fighters motivated by dislike of foreign invaders more than jihad into changing sides, another Afghan tradition.

It's definitely a long shot. The hopeful part of Obama's policy, however, resides precisely in the calculated ambiguity of the July 2011 date.

"Our troop commitment in Afghanistan cannot be open-ended," the president said in his televised speech, "because the nation that I am most interested in building is our own."

So when was the last time a president spoke in the language of realism, acknowledging limits to American power in remote parts of the world, and to America's ability to pay for endless wars of marginal strategic importance?

It's an important first step. Will there be another?