The best books of the decade 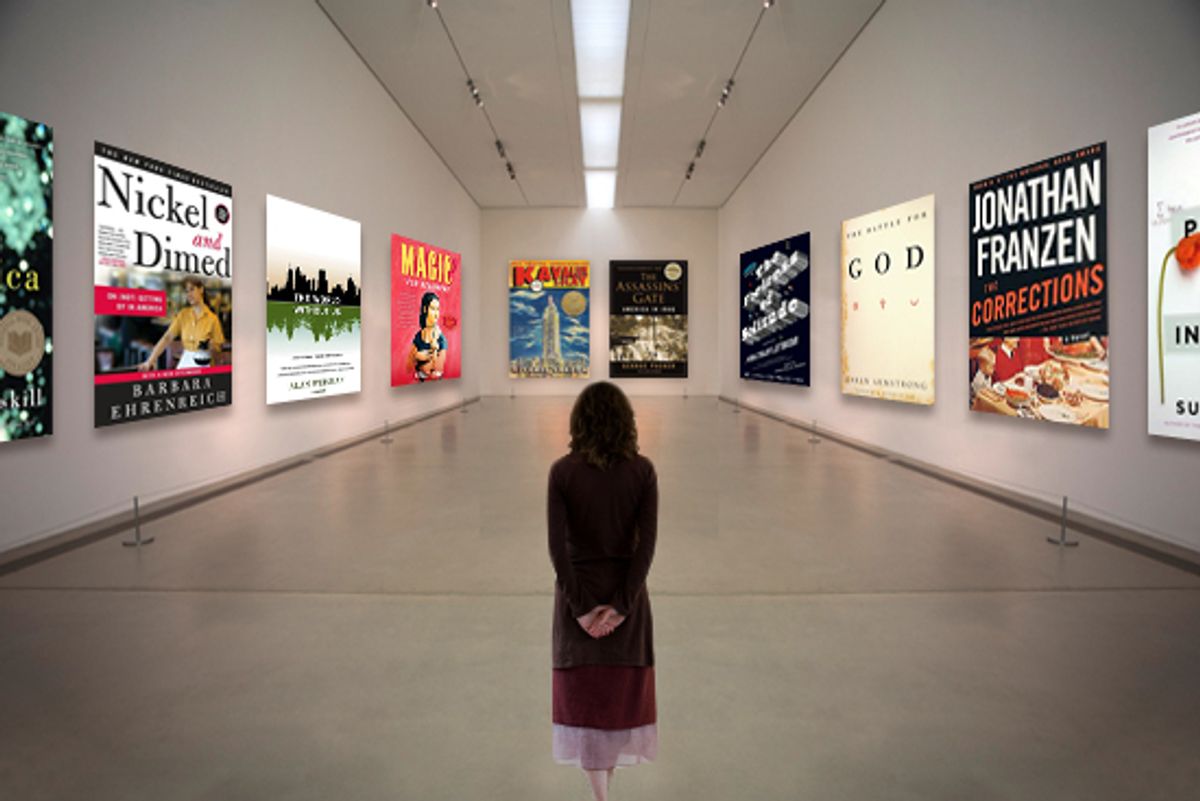 We'll spare you the overly ambitious sweeping statements. This has been a rocky decade, to say the least, and as many writers showed us just after the Sept. 11 attacks, we often can't formulate our best thoughts about traumatic events until much, much later. If anything, looking back over the past 10 years of Salon's books coverage, what's most striking is the durability of fiction and memoir; the novels and autobiographies we were talking about in 2000 still feel important today, while the bloom tends to fade faster from the nonfiction of the moment.

For that reason, the nonfiction on this list steers away from the most avidly trend-setting treatises (Malcolm Gladwell, we're looking at you!) in favor of definitive accounts of current events, penetrating histories and explorations of perennial human concerns. As for fiction, the most exciting thing to emerge in the 2000s has been the integration of genre elements into literary fiction: You no longer have to choose between good writing and good storytelling. But if the preceding two decades have seen the dismantling of the tyranny of rigorous realism, there are still masters (like Mary Gaitskill) working in that vein, and following it into rich new territory. The following lists are presented in chronological order.

"The Amazing Adventures of Kavalier & Clay"

by Michael Chabon
Two nice, mid-20th-century Jewish boys go to work in the nascent comic book industry, where the dreams and nightmares of the real world manifest themselves in the extravagant guise of entertainment for children. This buoyant tragicomic adventure story remains one of the most persuasive and gorgeously written depictions (and vindications) of the way popular culture transfigures our lived experience to become the modern-day equivalent of myth and folklore.

by Jonathan Franzen
The Lambert clan tries to figure out a way to live honorably in a world of leveraged buyouts, pharmaceutically engineered moods, dot-com scams, mix-and-match lifestyles and the cult of Christmas. In this saga of a befuddled Midwestern family, Franzen manages to achieve something remarkable and possibly unprecedented: a merciless satirical look at contemporary life that's also fundamentally generous and human.

by Colson Whitehead
A hack journalist gets hired by a travel Web site to write up a festival celebrating the folk hero John Henry. This brilliant, restless novel is about what happens when a cynical, opportunistic, media-steeped product of the Information Age collides with the mythic dignity of America's past. The fact that both the hero and the freelancer are black only complicates and enriches this novel's wit.

"The Fortress of Solitude"

by Jonathan Lethem
A boy named Dylan comes of age in a bohemian household as one of the few white kids in 1970s Brooklyn. To the smooth and sinewy beat of the era's soul soundtrack, this is a bruised paean to the author's hometown, a meditation on American boyhood and a cautionary tale about the folly of trying to escape your past.

by Susanna Clarke
Capacious, digressive, amply footnoted and very original, this is a classic historical novel -- only the history it's based on is (almost) entirely fantastic. Set in the early 19th century, it describes a Britain where magic was once a fairly common practice and is still the subject of serious scholarly study. With Austenian elegance and glorious imagery, Clarke describes the professional rivalry between the two eponymous master magicians; the result is nothing less than pure sorcery.

by Kelly Link
It's almost impossible to choose between this collection and Link's galvanizing 2001 debut, "Stranger Things Happen." Her exquisite stories mix the aggravations and epiphanies of everyday life with the stuff that legends, dreams and nightmares are made of, from pop culture to fairy tales. Some of these pieces are very scary, others are immensely sad, many are funny and all of them are written in prose so flawless you almost forget how much elemental human chaos they contain.

by Kazuo Ishiguro
Kath, a seemingly ordinary British girl, goes to a special boarding school where she and her friends are groomed for a special fate while enjoying and suffering the loves and betrayals that come to young people everywhere. This odd, heartbreaking novel unfurls age-old conundrums about what it means to be a person; about the grievous sin of treating anyone, however unexceptional, as the means to an end; and about the unfathomable future that awaits each and every one of us.

by Mary Gaitskill
A model with a fluorescent, dirty past winds up as a nobody with hepatitis who cleans offices for cash and dwells on her memories of an unlikely friendship with an older woman who died of AIDS. There's nothing feel-good about "Veronica," but this novel is so alive, so streaked with colors and spiked with sharp edges, that reading it is almost a tactile experience. It's a perfect, slicing portrait of a sad, once-beautiful woman who doesn't want -- or deserve -- our pity, but who ultimately earns our compassion.

by Zadie Smith
Conservative black Brits of Caribbean descent move in down the street from a leftish, mixed-race family in an East Coast college town. In Smith's hands the classic fodder of academic satire becomes miraculously endearing and sympathetic, a tale of two families that explodes with vitality, curiosity, enthusiasm and love for human beings and the perplexing situations they get into.

"A Person of Interest" by Susan Choi
In this Hitchcockian tale, an undistinguished Midwestern math professor finds himself the object of rumors and suspicion when a more celebrated colleague is killed by a mail bomber. A nuanced consideration of what it means to fit in, and of what we owe to the people around us, "A Person of Interest" eschews obvious answers. At once a tragedy of character and a tale of suspense, this novel is a seamless integration of the political and the personal, beautifully written and impeccably unsentimental.

"A Heartbreaking Work of Staggering Genius"

by Dave Eggers
Even if you haven't read Eggers' memoir about raising his younger brother after the deaths of their parents, you've felt its effect. An entire literary generation fell under the spell of Eggers' playful, ingenious, self-reflective style (and that was only the beginning of a brilliant career as an author, editor, teacher, collaborator and all-around impresario). Often mischaracterized as merely "ironic," that voice found a fresh, exhilarating way to approach life's devastating truths without succumbing to knee-jerk pathos or solemnity.

"The Battle for God"

by Karen Armstrong
A year before Muslim extremists brutally invaded the awareness of every Westerner, Armstrong, a former nun, published this essential, lucid consideration of the fundamentalist mind-set and its roots. During a decade when the conversation about religion has degenerated into pointless duels between screeching polemicists, she has brought a measured, open-minded wisdom to questions of faith and its place in the modern world.

"Nickel and Dimed: On (Not) Getting By in America"

by Barbara Ehrenreich
At the suggestion of an editor, journalist Barbara Ehrenreich attempted to live for two years on the wages of the average unskilled American worker. She worked as a waitress, maid and Wal-Mart clerk, shacking up in dives and dining on fast food, in an effort to find out how America's working poor make it. Her answer: A lot of them don't. If her efforts to suggest remedies are often rebuffed by her own subjects, her visceral dispatches from the ragged fringe of the American dream remain indispensable.

"The Assassins' Gate: America in Iraq"

by George Packer
A political liberal covering the Iraq war for the New Yorker, Packer initially supported the invasion as a way to rid the world of a bloody dictator but later came to view it as a wasted opportunity. The result of his reporting is among the most measured, thoughtful and self-examining of the many books on the conflict, taking in not only the theorists who justified it, but also inexperienced soldiers, frustrated reformers, the worried and grieving home front and ordinary Iraqis. Anyone looking for a better, deeper, broader understanding of the war will find it here.

by Lawrence Wright
Six years after Sept. 11, Wright produced the definitive account of the terrorist attacks and how they happened, from the fanatics who conceived and orchestrated the plot to the intelligence agencies that failed to anticipate and thwart it. He developed an expertise on the subject so deep that in time those same agencies tried to utilize him as a source and even tapped his phones. Yet for all the knowledge that went into "The Looming Tower," it reads as sleekly and compellingly as a top-notch thriller.

"The Omnivore's Dilemma: A Natural History of Four Meals"

by Michael Pollan
Inexhaustibly inventive and imaginative, Pollan jazzes up what could have been a dreary jeremiad about the "industrial food chain" by inviting us to view the modern American diet as the triumph of a South American grass that can currently be found in every processed food: King Corn. From the scientist who transformed the world by synthesizing nitrogen fertilizer to a calculation of just how much oil goes into "making" one conventionally raised steer (about a barrel), there's an observation to blow your mind on nearly every page of this hugely influential exploration of what we eat.

by Alison Bechdel
This graphic memoir is an investigation of Bechdel's childhood, spent in the ornate Victorian house that her father obsessively restored and maintained. After she came out of the closet to her parents at 19, her mom delivered a return whammy: Bechdel's father had a lifelong history of affairs with men, including teenage boys. Not long after, he died under ambiguous circumstances. Bechdel's years of drawing a serial comic strip have honed her ability to convey oceans of feeling in a single image, and the feelings are never simple; "Fun Home" shimmers with regret, compassion, annoyance, frustration, pity and love.

"The World Without Us"

by Alan Weisman
How would the earth be changed if the human race simply and suddenly vanished? Weisman uses this startlingly elementary question and its fascinating answer to suggest just how artificial our grip on the planet has become. Within days, subway tunnels would flood and collapse, subdivisions would be shattered by frozen pipes and devoured by mold and termites. For some reason, this doomsday scenario is more thrilling than depressing; it beguiles us into doing what often seems beyond our power -- picturing a much healthier planet and considering a less drastic way to get there.

"Pictures at a Revolution: Five Movies and the Birth of the New Hollywood" by Mark Harris
Film critic Harris takes the five nominees for the best picture Oscar of 1967, and uses them, and the stories behind them, as lenses to examine the tectonic changes that were taking place in the movie industry and American society as a whole. "Bonnie and Clyde," for example, embodied the birth of a hip new internationalism, and "The Graduate" spoke for youth culture and its romantic discontents. This is criticism at its best, well- and widely informed, with an enlightening fact, anecdote and insight on virtually every page.

"The Suspicions of Mr. Whicher: A Shocking Murder and the Undoing of a Great Victorian Detective" by Kate Summerscale
Part true-crime narrative, part cultural history, Summerscale's exploration of a notorious case of child-murder in 1860 is above all an inquiry into our culture's lasting and seemingly all-pervasive fascination with detectives and detective stories. Her hero is one of the very first investigators at the newly formed Scotland Yard, who inspired such writers as Charles Dickens and Wilkie Collins. Summerscale uses the mystery to crack open not only the allure of the detective as a fictional diviner of guilt and innocence, but also the curious details and ugly truths about everyday family life concealed behind the most respectable facades.