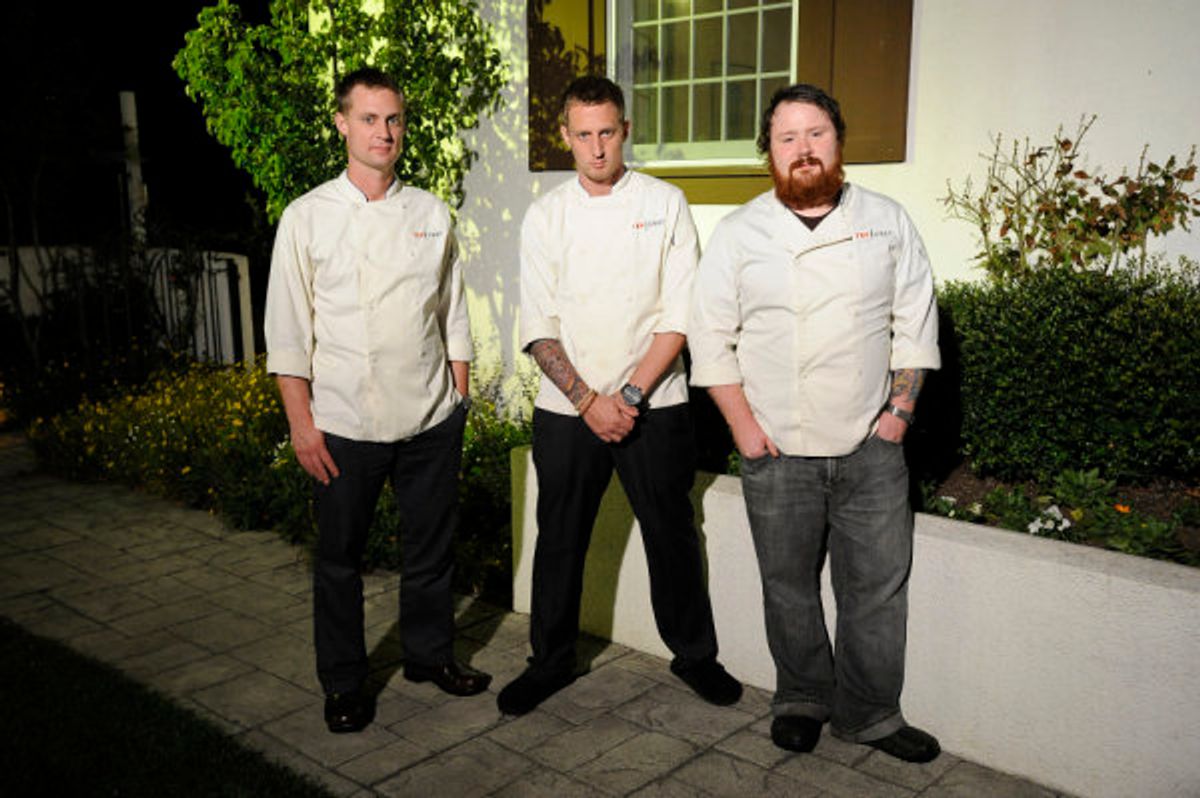 Don't let your younger, cockier brother apply to "Top Chef" with you.

That was the moral of the sixth season of the show, in which the irascible Voltaggio brothers whipped up a delicate sous vide here, an exquisite coulis there, each act of gourmet showmanship just an elaborate culinary noogie for the other brother's tender skull.

It was clear from the start that the siblings, who had skills that put most of the other cheftestants to shame, would make it to the finale. But which brother would win?

Some favored older brother Bryan Voltaggio, 33, with his wide eyes and quiet, restrained way of summarizing aggression between the two as simple sibling rivalry. He called his younger brother "a bit of a control freak" and only once whined that he was tired of Michael's "unprofessional behavior being rewarded."

Others liked the cut of younger brother Michael's jib, what with the 30-year-old's propensity for telling his big brother "Fuck you!" and "Don't be a dick!"

Of course, quite a few of us were rooting for Kevin Gillespie, 26, the soft-spoken, sweet, but still salty chef who won the judges over time and again with his far more simple Southern cooking. Compared to the brotherly gastro-metaphysics flashing and banging around nearby, Kevin's dishes were humble acts of love, not arrogant culinary pyrotechnics.

But this is television, and no one made better television (or, arguably, better dishes) than Michael. He even came armed with a joke when the judges asked each cheftestant to explain why he wanted to be Top Chef.

"I felt like I expressed my cuisine," said Bryan, rather limply. "And I hope that that's good enough for the win." Bryan's comments, like his food, lack seasoning.

"I just don't want Bryan to be Top Chef." Michael quipped, and everyone laughed heartily.

Then the kicker: "Food is me. It's how I express myself. My emotion is in it," Michael told the judges quite sincerely. "This is all I've ever done in my whole life, it's all I know how to do, it's all I'll ever do. I love what I do. That's it."

Kevin said he loved what he did, too … but it was all over. The judges agreed that Kevin had an off night. They did seem to love Bryan's dishes, and the editing didn't give us enough of a sense of what they thought gave Michael the edge over Bryan. This is one of the flaws of "Top Chef": Sometimes the editing of the judges' discussions is so extreme that it's impossible to tell what they thought of anything, beyond summarizing the major mistakes we already knew about from the earlier footage.

"I can't think of a prouder moment probably in both of our lives than right now," Bryan told the judges right before his brother gave him one last culinary wedgie for the road. "I think we accomplished what we set out to accomplish."

Well, your baby brother did anyway. Padma told Michael he was the winner, then Michael unexpectedly wept like a baby. Then it was his turn to be magnanimous. "I'm more proud of the fact that Bryan and I made it all the way to the end than I am about winning the entire competition. It was probably one of the hardest moments of our lives. I wish both of us could win."

Oh, please. Where do you think we've been all season, dude? We've been right here, eating beans out of a can while you shoved your brother's face in his own goat cheese ravioli with hen of the woods, delicata squash and bronze fennel!

We certainly didn't wish both brothers could win. We were sort of hoping Kevin could win. But we suspected that the more arrogant, risk-taking brother would take home the title of "Top Chef" and the $125,000 prize. That's just the way the world works, isn't it? The sexier, more aggressive little whippersnapper always gets the big bag of cash and the love/hate of an entire nation.

But then, his pressed chicken with calamari noodles did look pretty delicious, too.