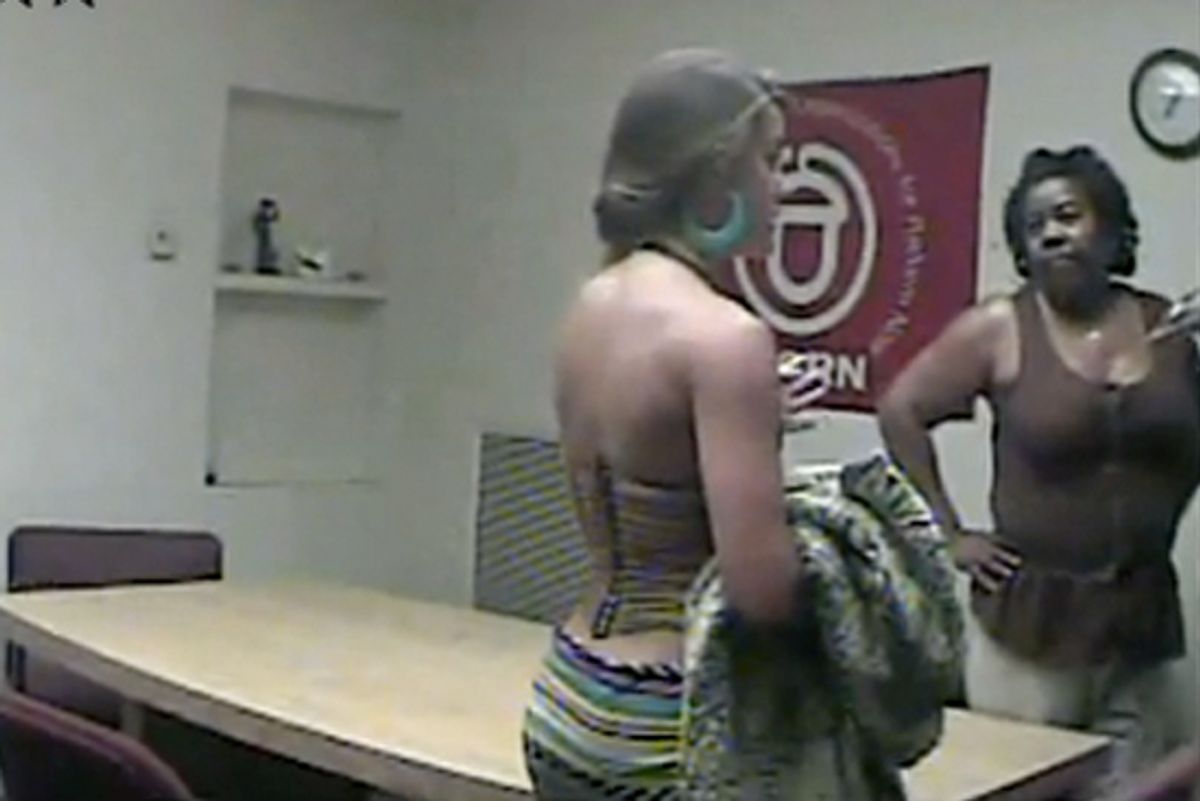 Hannah Giles in an ACORN office in Baltimore
--

The tough report released this week (PDF) by Scott Harshbarger, the former Massachusetts attorney general asked to prepare an independent assessment of ACORN by that organization's leaders, could scarcely compete with the infamous videotapes that sparked cable drama and congressional outrage last summer.

Prepared by Harshbarger with his colleagues at the Proskauer Rose law firm, the 47-page report neither absolves nor indicts the Association of Community Organizations for Reform Now, as ACORN is formally known, which has provided advocacy, voter registration and other services in poor and working-class communities across the country for decades. Having presided over Common Cause, the nation's leading political reform advocacy group, as well as overseen numerous investigations at the local and state level during his long career in public service, Harshbarger was highly qualified to examine the tangled affairs of ACORN.

Although Harshbarger found that the ACORN employees who were taped surreptitiously by video producers James O'Keefe and Hannah Giles had committed no illegal acts, he sharply criticizes the group's present and former leadership for the negligence and stupidity that led to the embarrassing incidents recorded in the group's offices in several cities, including New York, Washington and San Diego. He excoriates ACORN founder Wade Rathke and other former leaders of the group, whose drive for growth and power, Harshbarger writes, led them to abandon basic standards of governance, accountability and fiscal probity.

The videos, he writes, "represent the byproduct of ACORN's long-standing management weaknesses, including a lack of training, a lack of procedures and a lack of onsite supervision."

He notes that the "hidden camera controversy is perceived by many as a third strike against ACORN on the heels of the disclosure in June 2008 of an embezzlement cover-up, which triggered the firing of ACORN's founder, and the allegations of voter registration fraud during the 2008 election, done in collaboration with Project Vote," although he goes on to note that several U.S. attorneys found no basis to prosecute ACORN in the registration cases.

So rather than the "whitewash" reflexively denounced on right-wing Web sites, Harshbarger's report forthrightly reprimands the ACORN leadership for failing to "meet the expectations and requirements of the stakeholders who supported and benefited from its advocacy and service work." The report sets forth nine detailed recommendations for improved performance that Harshbarger says the organization must implement immediately.

Yet while the Harshbarger report focuses chiefly on the structural and managerial shortcomings of ACORN itself, its findings strongly suggest that the coverage of the "scandal" was overblown and mishandled by the media outlets that played those videotapes over and over again.

Amateurish as those recordings were, with their grainy images and muddy sound, they presented the bizarre tableau of prostitution and fraud as right-wing cinema vérité. The tapes' raw appearance was, however, highly misleading, according to Harshbarger, because the broadcast versions were edited and voiced over in ways that distorted the actual encounters between Giles and O'Keefe and the duped ACORN personnel.

To assess the meaning and accuracy of the videotapes, Harshbarger and his colleagues did the job that journalists ought to have done from the beginning. They interviewed ACORN employees. Later, they reviewed both the tapes and the transcripts made available on BigGovernment, a Web site owned by Andrew Breitbart, the right-wing impresario behind Giles and O'Keefe.

What Harshbarger discovered, as his report's Appendix D reveals, is that much of what appeared on Fox News Channel and in other media outlets, let alone on right-wing Web sites, was not what had actually occurred in the ACORN offices -- and that exculpatory material was edited out of the tapes.

In San Diego, for example, the ACORN employee shown on the tapes is someone whose primary language is Spanish, not English. The report notes that "in the released video, his participation amounts mostly to nodding or saying 'OK.' It is difficult to determine what this employee is responding to because the videographers' statements are obscured by a voiceover inserted later."

After O'Keefe and Giles left the San Diego office, that same employee called a cousin who worked in a local police department "to ask him general advice regarding information he had received about possible human smuggling" -- a reference to O'Keefe's claim that he was bringing in young girls from El Salvador to work as prostitutes. The police report concerning that call shows that officers followed up later, only to be informed by the ACORN employee that the incident was a "ruse."

In Philadelphia, O'Keefe's suspicious behavior likewise alerted the ACORN staff that something was amiss, and the police were informed there as well. No video of the visit to the Philly office was ever released by O'Keefe and Breitbart, although Harshbarger notes that "some of the released videos contain scenes of the sign of the Philadelphia ACORN office and shots of Philadelphia's head organizer with no audio."

Contrary to the claims of right-wing critics, who complain that Harshbarger failed to interview any of ACORN's adversaries, the lawyer and his colleagues were rebuffed when they tried to speak with O'Keefe and Giles. Amy Crafts, a Proskauer associate who co-authored the report, told me that she made several efforts to contact the video producers both in person and through their attorneys.

On Oct. 21, Crafts said, she was barred from the press conference held by O'Keefe and Giles at the National Press Club in Washington, even though she promised not to ask any questions. Then in November, she wrote to O'Keefe and Giles requesting interviews through their Washington attorneys. O'Keefe's lawyer replied that his client would not participate, while Giles' lawyer didn't bother to answer at all.

None of this should be surprising to anyone familiar with the backgrounds of O'Keefe, Giles and Breitbart -- a former employee of the Drudge Report. But it is now clear that the ACORN videotapes were an exercise in propaganda, not journalism.

What's worse is that the mistakes committed by most news outlets in the early coverage of this incident continue. Reporting on Harshbarger's findings, the Associated Press story published in the Washington Post on Tuesday doesn't mention his questions about the videotapes, his rebuffed attempt to interview the video producers, or the producers' staunch refusal to permit him to review the unedited tapes for comparison with the versions that were released.