Why did so many liberals and conservatives both find so much to cheer in the president's foreign policy speech? 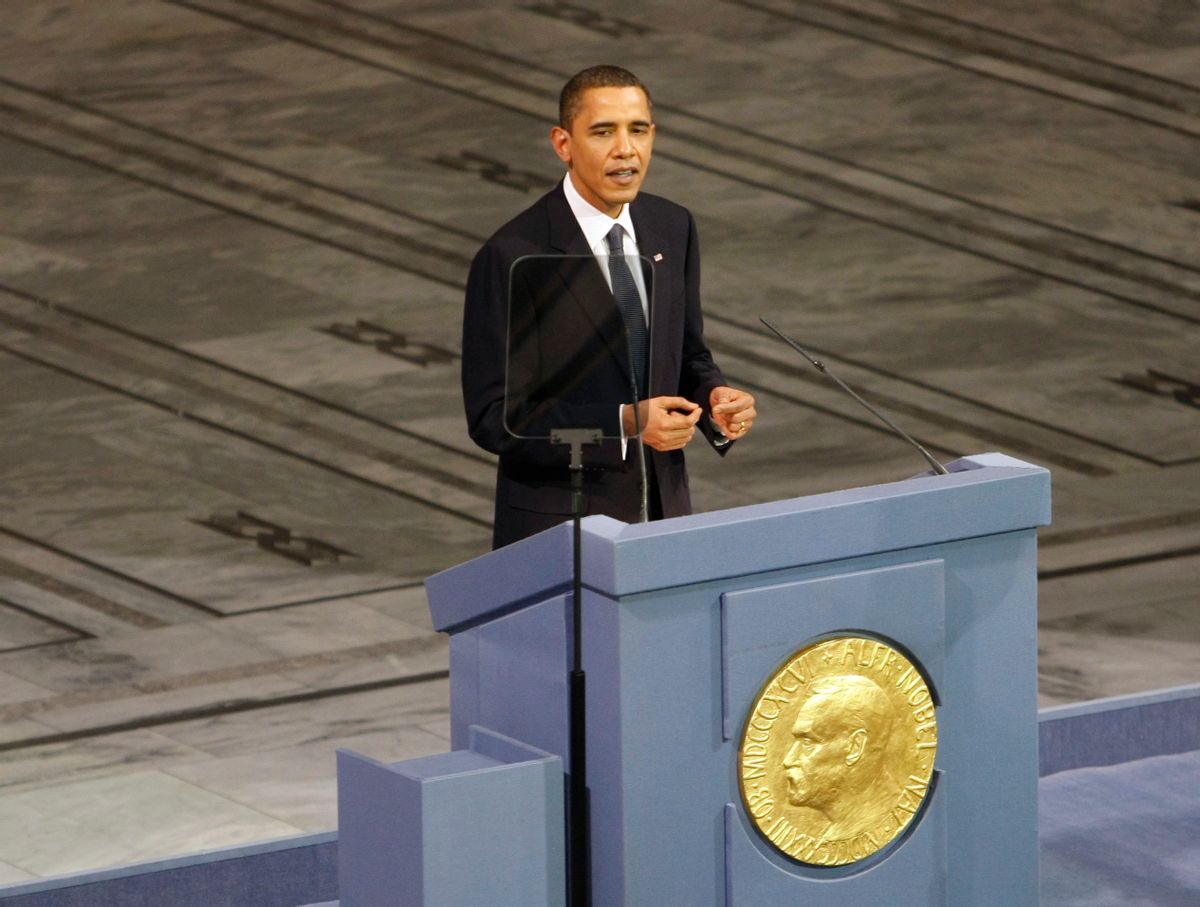 Reactions to Obama's Nobel speech yesterday were remarkably consistent across the political spectrum, and there were two points on which virtually everyone seemed to agree:   (1) it was the most explicitly pro-war speech ever delivered by anyone while accepting the Nobel Peace Prize; and (2) it was the most comprehensive expression of Obama's foreign policy principles since he became President.  I don't think he can be blamed for the first fact; when the Nobel Committee chose him despite his waging two wars and escalating one, it essentially forced on him the bizarre circumstance of using his acceptance speech to defend the wars he's fighting.  What else could he do?  Ignore the wars?  Repent?

I'm more interested in the fact that the set of principles Obama articulated yesterday was such a clear and comprehensive expression of his foreign policy that it's now being referred to as the "Obama Doctrine."  About that matter, there are two arguably confounding facts to note:  (1) the vast majority of leading conservatives -- from Karl Rove and Newt Gingrich to Peggy Noonan, Sarah Palin, various Kagans and other assorted neocons -- have heaped enthusiastic praise on what Obama said yesterday, i.e., on the Obama Doctrine; and (2) numerous liberals have done exactly the same.  That convergence gives rise to a couple of questions:

Why are the Bush-following conservatives who ran the country for the last eight years and whose foreign policy ideas are supposedly so discredited  -- including some of the nation's hardest-core neocons -- finding so much to cheer in the so-called Obama Doctrine?

How could liberals and conservatives -- who have long claimed to possess such vehemently divergent and irreconcilable worldviews on foreign policy -- both simultaneously adore the same comprehensive expression of foreign policy?

Let's dispense first with several legitimate caveats.  Like all good politicians, Obama is adept at paying homage to multiple, inconsistent views at once, enabling everyone to hear whatever they want in what he says while blissfully ignoring the rest.  Additionally, conservatives have an interest in claiming that Obama has embraced Bush/Cheney policies even when he hasn't, because it allows them to claim vindication ("see, now that Obama gets secret briefings, he realizes we were right all along").  Moreover, there are foreign policies Obama has pursued that are genuinely disliked by neocons -- from negotiating with Iran to applying some mild pressure on Israel to the use of more conciliatory and humble rhetoric.  And one of the most radical and controversial aspects of the Bush presidency -- the attack on Iraq -- was not defended by Obama, nor was the underlying principle that produced it ("preventive" war).

But all that said, it's easy to understand why even intellectually honest conservatives -- including neocons -- found so much to like in "the Obama Doctrine," at least as it found expression yesterday.  With the one caveat that Obama omitted a defense of the Iraq War, the generally Obama-supportive Kevin Drum put it this way:

I really don't think neocons have much to complain about even if Obama didn't use the opportunity to announce construction of a new generation of nuclear missiles or something. Given that he was, after all, accepting a peace prize, it was a surprisingly robust defense of war and America's military role in the world. Surprisingly Bushian, really . . .

Indeed, Obama insisted upon what he called the "right" to wage wars "unilaterally"; articulated a wide array of circumstances in which war is supposedly "just" far beyond being attacked or facing imminent attack by another country; explicitly rejected the non-violence espoused by King and Gandhi as too narrow and insufficiently pragmatic for a Commander-in-Chief like Obama to embrace; endowed us with the mission to use war as a means of combating "evil"; and hailed the U.S. for underwriting global security for the last six decades (without mentioning how our heroic efforts affected, say, the people of Vietnam, or Iraq, or Central America, or Gaza, and so many other places where "security" is not exactly what our wars "underwrote").  So it's not difficult to see why Rovian conservatives are embracing his speech; so much of it was devoted to an affirmation of their core beliefs.

The more difficult question to answer is why -- given what Drum described -- so many liberals found the speech so inspiring and agreeable?  Is that what liberals were hoping for when they elected Obama:  someone who would march right into Oslo and proudly announce to the world that we have a unilateral right to wage war when we want and to sing the virtues of war as a key instrument for peace?  As Tom Friedman put it on CNN yesterday: "He got into their faces . . . I'm for getting into the Europeans' face."  Is that what we needed more of?

Yesterday's speech and the odd, extremely bipartisan reaction to it underscored one of the real dangers of the Obama presidency:  taking what had been ideas previously discredited as Republican or right-wing dogma and transforming them into bipartisan consensus.  It's not just Republicans but Democrats that are now vested in -- and eager to justify -- the virtues of war, claims of Grave Danger posed by Islamic radicals and the need to use massive military force to combat them, indefinite detention, military commissions, extreme secrecy, full-scale immunity for government lawbreaking, and so many other doctrines once purportedly despised by Democrats but now defended by them because their leader has embraced them.

That's exactly the process that led former Bush DOJ official Jack Goldsmith to giddily explain that Obama has actually done more to legitimize Bush/Cheney "counter-terrorism" policies than Bush and Cheney themselves -- because he made them bipartisan -- and Yale Law Professor Jack Balkin made the same point to The New York Times' Charlie Savage back in July:

In any case, Jack Balkin, a Yale Law School professor, said Mr. Obama’s ratification of the basic outlines of the surveillance and detention policies he inherited would reverberate for generations. By bestowing bipartisan acceptance on them, Mr. Balkin said, Mr. Obama is consolidating them as entrenched features of government.

"What we are watching," Mr. Balkin said, "is a liberal, centrist, Democratic version of the construction of these same governing practices."

Most of the neocons celebrating Obama's speech yesterday made exactly that point in one way or another:  if even this Democratic President, beloved by liberals, announces to the world that we have the unilateral right to wage war and that doing so creates Peace and crushes Evil, and does so at a Nobel Peace Prize ceremony of all places, doesn't that end the argument for good?

Much of the liberal praise for Obama's speech yesterday focused on how eloquent, sophisticated, nuanced, complex, philosophical, contemplative and intellectual it was.  And, looked at a certain way, it was all of those things -- like so many Obama speeches are.  After eight years of enduring a President who spoke in simplistic Manichean imperatives and bullying decrees, many liberals are understandably joyous over having a President who uses their language and the rhetorical approach that resonates with them.

But that's the real danger.  Obama puts a pretty, intellectual, liberal face on some ugly and decidedly illiberal polices.  Just as George Bush's Christian-based moralizing let conservatives feel good about America regardless of what it does, Obama's complex and elegiac rhetoric lets many liberals do the same.  To red state Republicans, war and its accompanying instruments (secrecy, executive power, indefinite detention) felt so good and right when justified by swaggering, unapologetic toughness and divinely-mandated purpose; to blue state Democrats, all of that feels just as good when justified by academic meditations on "just war" doctrine and when accompanied by poetic expressions of sorrow and reluctance.  When you combine the two rhetorical approaches, what you get is what you saw yesterday:  a bipartisan embrace of the same policies and ideologies among people with supposedly irreconcilable views of the world.

UPDATE:  Obviously quite related to all of this, if I had to recommend one article for everyone to read this month, it would be Matt Taibbi's new, masterful account in Rolling Stone of how the Obama administration has aggressively ensured the ongoing domination of our government by Wall Street.   I don't want to excerpt any of it because I want to encourage everyone to read it in its entirety; suffice to say, it makes many of the same arguments as those made here in the context of Obama's decisions in the financial and economic realms (though several people, such as Tim Fernholz and Salon's Andrew Leonard, have voiced what appear to be serious objections to some of Taibbi's claims; hopefully, he'll respond).

UPDATE II:  One of the most recurring features of the Bush-follower mindset was the claim that the President's supreme duty -- one which the Constitution requires him to swear to -- is to "protect the country," a rhetorical sleight-of-hand suggesting that the Constitution somehow venerates national security above other values.  As 23skiddo points out, Obama featured this exact claim in an even more misleading form yesterday when -- in explaining why King and Gandhi were too restrictive for him -- he described himself "as a head of state sworn to protect and defend my nation."

UPDATE III:  Andrew Sullivan praises Obama's speech and Obama himself as a shining example of Niebuhrian complexity.  Again, I think the speech, like Obama himself, was intellectually skillful -- even more so politically -- though, personally, I think Chris Hayes is much closer when he says the speech was Obama's typical "wearying," too-clever "on the one hand on the other, I reject false choices, needle-threading 'pragmatism,'" which Hayes said worked well for Obama's campaign speech on race (I agreed) but does not work in matters of war and peace or for much else with Obama any longer.

In a separate post, Sullivan -- referencing what I wrote here -- says that "Obama's foreign policy positions should have been clear to anyone playing attention during the campaign."  I agree.  The moment when I was convinced Obama would win the election was when, during the second presidential debate, McCain virtually accused him of being a warmonger -- or at least reckless -- for advocating further strikes on Pakistan.  That Obama was defending himself from charges of being too eager to threaten military force -- voiced by McCain of all people -- was a shrewd political move.  I don't find anything about Obama's foreign policy positions surprising; as opposed to his civil liberties positions, which he has routinely violated, he outlined these broad foreign policy sketches during the campaign (though added much more detail, and I'd suggest much more receptiveness to war generally, during yesterday's speech).  I don't agree at all with the criticism that his escalation in Afghanistan (as opposed to his civil liberties positions) is a "betrayal."  This is who Obama is and that has been clear for quite awhile.

Still, the question remains:  why did so many Bush-loving neocons and progressives alike react the same way to Obama's comprehensive foreign policy speech yesterday?  What could explain that?  Does Sullivan have an answer?