The most intimidating tribemate since Richard Hatch rules through manipulation and paranoia. But will he win? 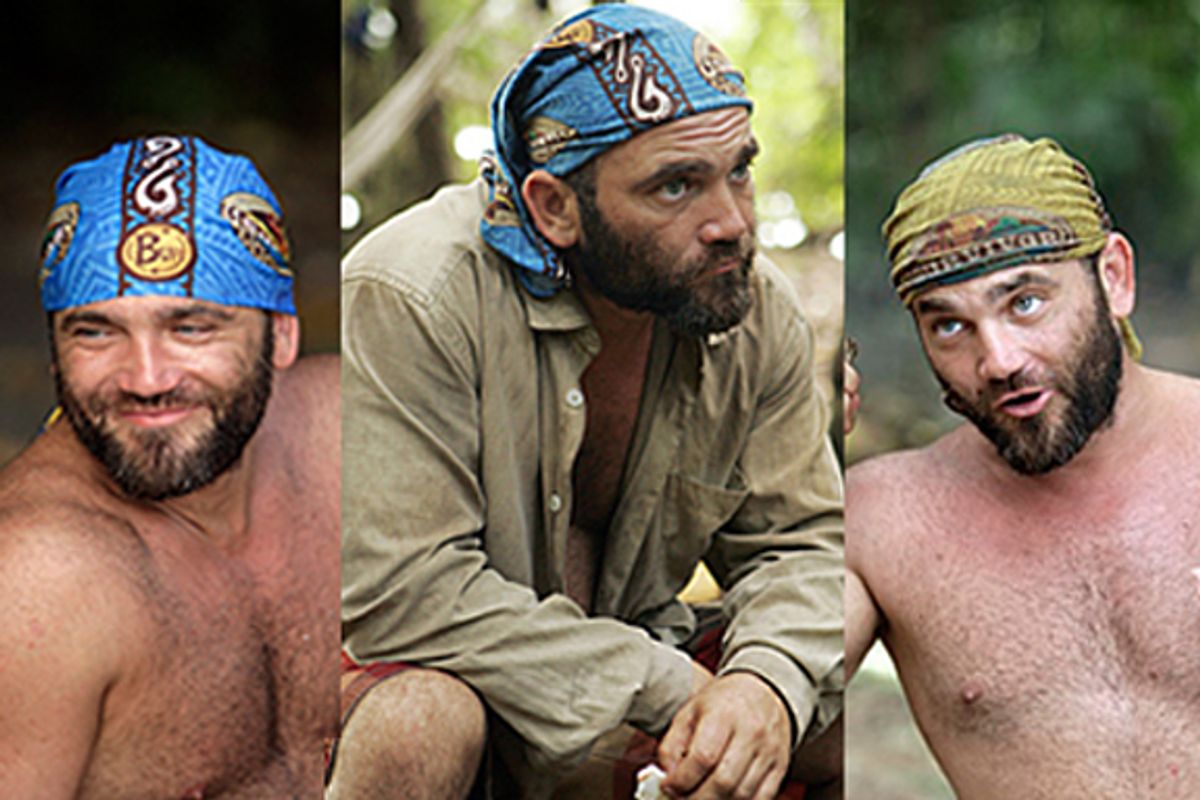 We all need a strong leader, even if it's just that little voice in our heads telling us that the CIA is tapping our phone. Dictatorships, domestic abuse, religions centered around loving but vengeful patriarchs, the military, yoga retreats, Oprah — all symptoms of our childlike desire to be led around by our noses.

And never before has the populace strained quite so strenuously against the unbearable oppression of free will. Look what our independence has bought us, after all: Houses we can't afford that are worth less than our gigantic loans. A terrible legacy as the world's jackboot-wearing cops. Lady Gaga. Where does it end?

We'll be just like the Red Guards in China, only less fit and much more perverted.

"My parents may love me, but not as much as Chairman Mao." That's what those peppy kids used to say in China, back in the heady salad days of the Cultural Revolution.

The plucky castaways of "Survivor: Samoa" (8 p.m. Thursdays on CBS) might consider adopting the same slogan to salute their chosen leader, Russell, the scheming millionaire who announced that he was clearly destined to win the game from his first day on the show. Russell explained his plan very clearly: sow the seeds of discontent among his tribemates, control their tiny little minds, make alliances with almost every one of them, and find as many hidden immunity idols as possible, with or without clues. Russell assured the cameras that he would rise like a phoenix above the mediocre minds in his midst and sally forth to a victory that was all but assured. "I'm not here for the money," he said. "I'm only here to show people how easy it is to win this game."

So far, so good, Chairman Russell!

After conjuring destiny, which every good leader knows is the only way to kick off any vigorous reign of terror, Russell skipped quickly to the corruption and chaos phase, emptying his tribemates' water canteens, stealing tribemate Jaison's sock and burning it in the fire, and generally inciting confusion and dismay among his people. This part of his plan looked flatly foolhardy at the outset, yet, as his tribemates wept and tore their hair and fell to their knees on Reward Challenge and Immunity Challenge battlefields, Russell was there to calmly guide them through the storm.

Even as we questioned Russell's approach, he gained power. He managed to vote off every single tribemate who challenged his authority or cast a shadow of doubt on his sincerity. He found three hidden immunity idols in a row, two without reading a single clue about where they were hidden. He successfully booted every enemy among his ranks and then, when the tribes merged, he methodically eliminated the dominating Galu tribe even though his tribe, Foa Foa, didn't start with the numbers necessary to do so. Sometimes he told everyone who to vote off, other times he had members of his alliance do it for him. He wisely gave Shambo the impression that she was leading the charge, and when he had to shift the plan on her at Tribal Council, he justified it by telling her that the eliminated tribe member was gunning for her.

Yes, Russell's scorched-earth policy has been effective indeed. But now we arrive at a crucial juncture in the game: There are just six tribe members left, all of whom are finally sensing that Russell could be a real threat to their chance at the million-dollar prize. What are Russell's true allegiances? They wonder. Even Russell doesn't seem sure about that one. Who can Russell trust? Russell says that Mick or Jaison might be after him — after all, if he were them, that's what he would do.

But Mick and Jaison aren't Russell. More on that in a minute.

First, let me just make it clear, in case it isn't obvious already, that this has been a great season of "Survivor," mostly because of Russell's audacious and largely successful ascendancy. It's rare that a leader on the show rules first by creating chaos behind the scenes, then by building alliances and making scattered confessions and allegiances, and finally by intimidation. Richard Hatch came the closest to this level of power wielding and fear mongering, and it almost backfired several times. Since then, players have generally banded together to get rid of anyone who seemed to be double-dealing.

So far this season, though, we haven't seen much evidence of strong bonds forming between other players. Sometimes we're kept in the dark about these bonds, but this year, somehow it seems likely that they don't exist. In fact, everyone seems to recognize that Russell is double-dealing, but no one knows quite what to do about it.

Why? Because they've all enjoyed the luxury of being led by their noses since they landed on the beaches of Samoa. If someone else is doing most of your thinking and your dirty work for you, and miraculously you remain on the island day after day, why stir the pot? That's like landing in paradise, then taking God to task for the inadequate flavor profile of the pineapples there.

And let's remember, these players are weak. They're hungry. They're not sleeping well. Is this really the time to take a stand? Once it comes time to fight, will any of us recognize that the hour of destiny is upon us? Most of us, when pressed to face up to a big challenge, tend to order a pizza and cue up "South Park" instead.

And did I happen to mention that Russell is surrounded by a particularly passive group of individuals? Somehow, even as they all acknowledge that Russell is in control, they seem unable to make a move against him. Yes, they're worried that he'll play his idol and then come after whoever led the charge (a reasonable fear). But they're also slightly defeated and unnerved by his strategic and interpersonal power. Jaison has demonstrated an amusing propensity for casting situations in defeatist terms. Mick has shown a real knack for shrugging and gritting his teeth in the face of impending disaster. Even Natalie, who led a successful charge against Eric the bartender (at Russell's behest?), seems a little uncertain over what to do next — probably because Russell has promised her the No. 2 spot on and off for weeks.

"Who does Russell really plan to take to the final?" they all keep asking Russell and each other, as if their fate already lies in his hands. Somehow it seems clear that Jaison and Mick won't launch an offensive against Russell until it's too late. After all, when it comes down to four or three, things can get very, very arbitrary. Someone wins immunity, and Russell uses his charm to win that person over. Goodbye, odd man (or woman) out.

In truth, Russell probably aims to bring Shambo and Natalie. No one likes Shambo, and Natalie probably appears too inconsequential to win the money (although she's arguably played the game the best of anyone except for Russell). We know Brett has to be eliminated soon, mostly because he's spoken on camera maybe once since the start of the show. Even when a player seizes power out of nowhere, the show's editors are careful to introduce that person early in the show so we know him or her once he or she starts to make a grab for power. In fact, we probably should've suspected that Foa Foa would be the last tribe standing, since we spent more air time with them from the start than we did with Galu. Then again, Galu seemed to spend most of their time before the merge doing yoga. (See? They were crying out for a strong leader from the start!)

Will Russell prevail? Personally, I'd love to see him emerge victorious. Unfortunately, though, strategic as the first 35 days of "Survivor" are, the last four days always feel about as arbitrary as drawing straws. Sure, the final challenges are usually some combination of obstacle courses, balancing acts, and puzzles. But somehow, the winners are never easy to predict. And then, who do the winners take to the end? For all of his manipulations and tenuous bonds, Russell hasn't exactly been dominant in the challenges. Making it this far is a real accomplishment. But to win it all after dominating this long? That practically requires divine intervention.

No matter how it turns out, though, I guarantee you that Russell won't be braying about how easy it is to win this game anymore.

Or if he does, he'll be lying through his teeth. As we've seen, he's pretty good at that.