How does a serial killer drama cross the line? With gallons of fake blood and one heartless, season-ending twist 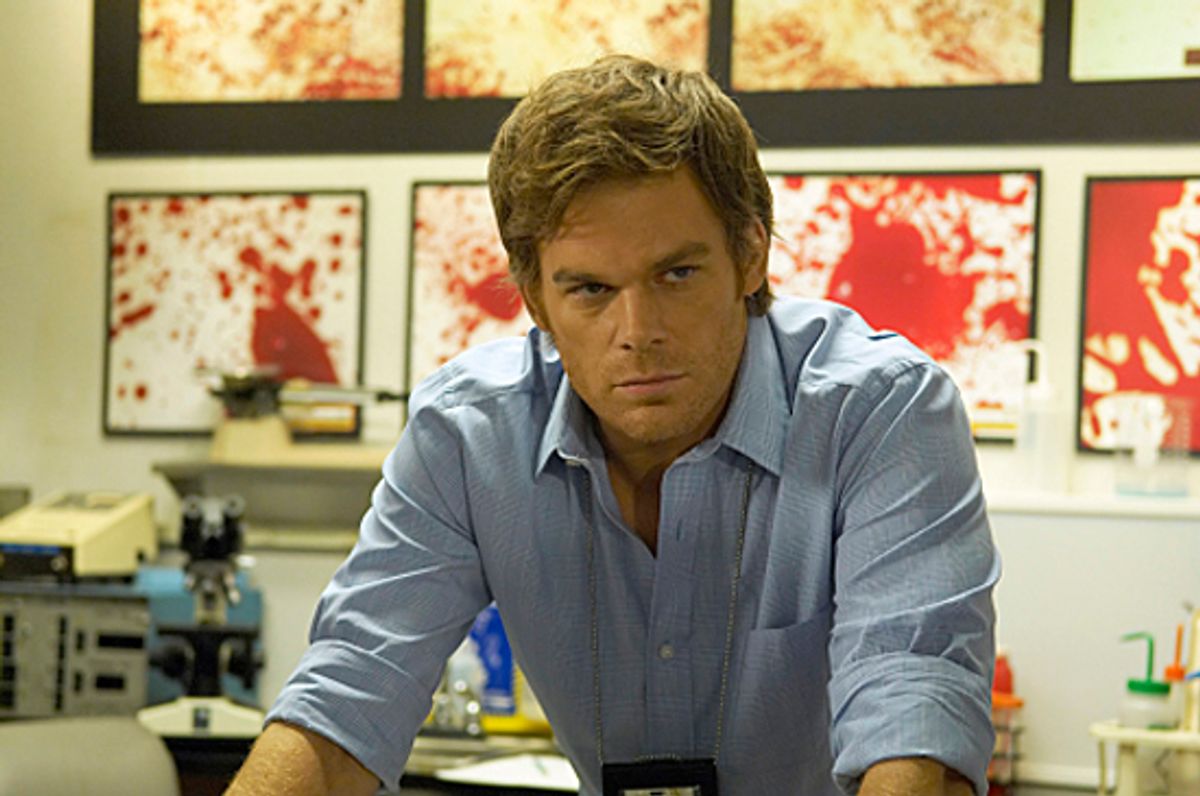 I don't think I've ever seen an episode of any show that depressed me more than the "Dexter" finale did Sunday night.

Yes, it's a show about a serial killer. Yes, I'm sure that plenty of people watched that finale, said to themselves, "Ha! What an awesome twist!" and then tucked themselves into bed and fell soundly to sleep. But I feel like I just got slammed in the head by a two-by-four.

I figured that the fourth season would end with Dexter Morgan avenging the Trinity Killer, then flying off to meet his wife, Rita, for a long-delayed honeymoon. After all, Dexter had married Rita in a relatively upbeat Season 3 finale, right?

Wrong. On Sunday night, Dexter did finish off Trinity Killer Arthur Mitchell, but when he came home to grab his bags for his flight to the Florida Keys, he retrieved a message from Rita on his phone, saying she forgot something at home. Panicked, he dialed her number, but her phone rang a few feet away.

Suddenly we hear a baby crying. Dexter runs to the bathroom. There's his baby boy, Harrison, sitting in a giant pool of blood. And there's Rita in the bathtub, dead. The Trinity Killer's last victim.

Yes, yes, I know. What did I expect? But somehow, despite several nihilistic seasons before it, the fourth season of "Dexter" felt more like a cross between a murder mystery and a very, very dark comedy. For Dexter, balancing work and family against his extracurricular acts of murderous vengeance was becoming well nigh impossible. But even as his treacherous hobby seemed to serve as a metaphor for the darkness and alienation that lurks at the edges of even the most conventional lives, Dexter seemed to be changing his stripes, making choices that were less about his own homicidal compulsions and more about an abiding need to serve the other people in his life.

And the tone of the episodes during the first half of the season was unabashedly comedic: Dexter makes awkward attempts to talk to his stepkids, hurls one of them into the pool -- for fun! -- but it just creeps her out! Dexter joins his neighborhood watch group! Dexter wakes in the middle of the night with the baby, falls asleep behind the wheel and can't remember where he hid his victim's body! Da dum dum, chhh! The whole show started to feel like an off-kilter procedural slapstick comedy. Plus, wasn't Dexter ultimately trying to do the right thing by ridding the world of killers who were roaming free, looking for their next victims?

"Dexter" has always been a bleak show that still managed to balance its darkness with light -- and the light came mostly from Rita. Somehow, in spite of great flaws, Dexter managed to maintain a relationship with this little ray of sunshine. She was so cheerful, so hopeful, so effusive, trussed up in her flowery dresses, that she gave Dexter's whole life this surreal cast, like he went to sleep in hell and woke up over the rainbow. While shows like "Breaking Bad" tend to wallow in unremitting gloom, forcing depressed and/or despicable characters in our faces until we can't take it anymore, "Dexter" walked this strange line between despair and an almost desperate, happy-go-lucky, live-for-the-moment cheer.

Yes, it took effort for Dexter to endure Rita's relentless optimism. Who couldn't relate to his flat affect in the face of Rita's senseless exuberance? Watching her burst onto the scene was sometimes a little bit like driving to work in the rain, then turning on the radio to hear some half-crazed person singing about all-you-can-eat fried shrimp or barking happily about the next Toyotathon. Somehow that feeling of pop cultural vertigo is an essential part of the American experience. Rita embodied that flavor of buoyancy that can either lift you up or drag you down lower, depending on how low you're feeling at the time.

Without Rita, though, "Dexter" is just hell.

But that's not my main problem with the finale. "Dexter" without Rita is just an artistic choice. Sure, everyone's cooing over the endless possibilities for the next season of the show. Will Dexter raise his stepkids all alone? Will he father Harrison alone? Will he get meaner and start killing without following the code or even limiting himself to murderers? This is television, after all. You can't just end a chapter, you have to think about the next season's plot.

But you know what isn't an artistic choice? Pouring a gallon of fake blood on the floor and then sitting an infant down in the middle of it. I'm still struggling to get into the minds of the writers who could stand around on the set that day, snickering to themselves and shaking their heads and saying, "Oh, this'll get them! They'll never forget this one, no sir! No one has ever seen anything quite so shocking as this before!"

Tune in next season when Dexter lops off a dog's head and eats it, and then Debra unknowingly falls in love with Pol Pot. I'm sorry, but provocation on this level is as artful as hurling shit with the chimpanzees.

Subtlety really is dead, isn't it? Remember those promos for the fourth season that showed Dexter holding his baby, both of them splattered in blood? They were on buses all over L.A. a few months ago. An ad like that is sort of odd and disturbing and funny, really, as long as the baby is never actually splattered in blood.

But once you set the baby into a big pool of his mother's blood? Personally, I'm out. Because not only did the show snuff out its last ray of sunshine, it did so in a way that felt like a direct act of hostility against the audience itself.

Maybe we deserve it for watching in the first place. Or maybe this is the price those of us who can't chuckle at absolutely everything under the sun will be forced to pay, over and over again in this spectacle-driven nightmare culture, for still having some shred of humanity deep inside us.

What can I do? That finale just made me feel sick. I can't believe someone thought that was a reasonable way to end the season. Good job, it really was shocking. In fact, I’m still in shock.