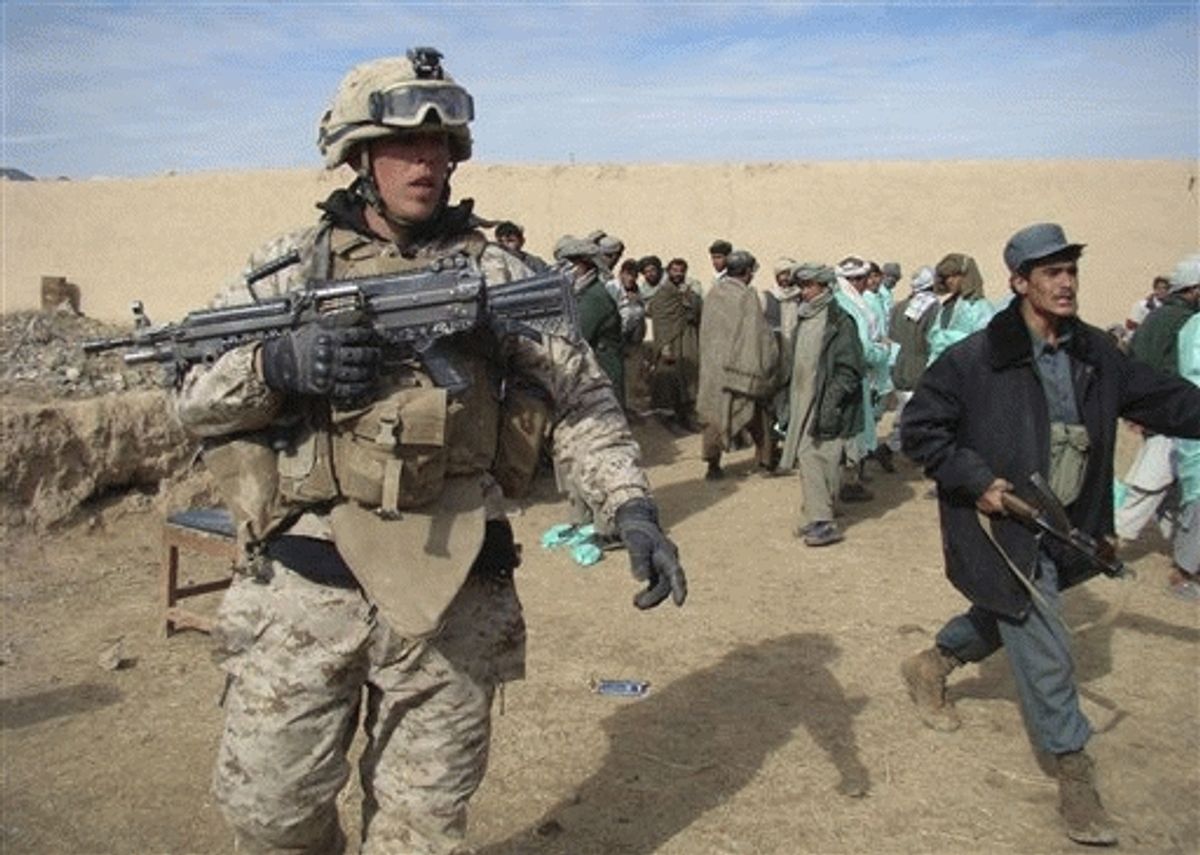 In May, 2008, Dick Cheney caused an uproar when he told ABC News' Martha Raddatz that public opposition to the war in Iraq was, in essence, irrelevant:

RADDATZ: Two-third of Americans say it’s not worth fighting.

RADDATZ:  So? You don’t care what the American people think?

CHENEY: No. I think you cannot be blown off course by the fluctuations in the public opinion polls.

Today, New York Times Editorial Page -- which has become one of the most vehement supporters of the war in Afghanistan (and Pakistan) -- echoed Cheney's sentiment when demanding that European leaders escalate their commitments to the war despite overwhelming and growing opposition among their citizenry:

Germany’s chancellor, Angela Merkel, and France’s president, Nicolas Sarkozy, have repeatedly stated that their countries have a stake in the future of Afghanistan and the future of NATO.  But both are wary of pushing their voters too far, too fast. (Both have essentially postponed their decisions on further troop contributions until late next month.) Democratically elected leaders cannot ignore public skepticism, but they should not surrender to it when they know better.

Although Cheney's decree was a bit more blunt and not as concerned with meaningless self-justifying caveats ("Democratically elected leaders cannot ignore public skepticism, but . . . "), those statements seem quite similar.

In the U.S., public opinion toward Afghanistan is now decidedly more pro-war than it is in Europe.  Whereas polls earlier this year found majorities of Americans against the war, polls now show that -- after Obama's decision to escalate again -- a majority supports his "surge."  That's not surprising:  when you combine (a) GOP support for any American war (especially one begun by George Bush) with (b) the support of many Democrats for anything and everything Barack Obama endorses, you get a majority.  And indeed, this recent change in public opinion towards the war in Afghanistan is due to "a notable jump in support from the president’s Democratic base" once Obama announced his "surge."  Obama speaks and many Democrats follow, even into more war (see this weekend's explanation of "Obamania" from Matt Taibbi about how and why that works).

But even with all of the "debate" over the war in Afghanistan, there are still significant anti-democratic features to it.  Over the weekend, Time's Joe Klein, undoubtedly reciting what his hawkish government sources told him, trotted out a brand new "justification" for the war in Afghanistan:  we have to stay in order to prevent India and Pakistan from going to war with each other.  The U.S. government excels at finding brand new Urgent National Security Reasons to continue fighting wars once the original justifications fail or otherwise become inoperative:  no more Al Qaeda in Afghanistan? Still have to stay, otherwise India and Pakistan will fight.  As part of his stenography services, Klein explained:

[S]ome of the best arguments about why this war is necessary must go unspoken by the President.

So there are deeply compelling reasons to escalate in Afghanistan.  But they're secret.  They "must go unspoken by the President."  The American people have no right to know what the alleged purposes and objectives are of this war.  They're supposed to fight in it (a tiny percentage, anyway) and pay for it with massive debt but they can't be told why it's really being fought.  And, of course, one of the most significant prongs of this war -- the one fought with Predators and drones in Pakistan -- is something no American government official will even mention, let alone explain and defend.  Recent escalations of that part of the war -- as well as ones being actively considered still, such as targeting a large Pakistani city where high civilian causalties are likely -- will remain strictly secret.  That, too, "must go unspoken by the President."

It's true that as a Constitutional Republic, the U.S. is not governed by direct democracy.  Political leaders are at times expected to exercise judgment independent of public opinion.  And once wars are underway, things like troop movements and battle plans are legitimately classified.  But whether to fight wars -- and the reasons they're being fought -- are probably the least appropriate decisions to immunize from public opinion.

The Constitution ties the ongoing use of military force to the approval of the American citizenry in multiple ways, not only by prohibiting wars in the absence of a Congressional declaration (though it does impose that much-ignored requirement), but also by requiring Congressional approval every two years merely to have an army.  In Federalist 26, Hamilton explained that this Constitutional requirement is vital for ensuring constant public involvement in debates over war and peace.  In Federalist 24, he described the need for public involvement in such matters as "a great and real security against military establishments without evident necessity."  That's because the Founders were all too aware, as John Jay put it in Federalist 4, of the "variety of other motives, which affect only the mind of the sovereign, [that] often lead him to engage in wars not sanctified by justice or the voice and interests of his people."

Urging leaders to continue to wage wars in the face of great public opposition, as the NYT Editorial Page does today, is deeply misguided and undemocratic.  But fighting wars for secret, undisclosed reasons -- as Klein suggests and defends is being done by the Obama administration -- is even worse.  But -- as former Navy Commander Jeff Huber and former Marine Scott Ritter, among others, have both recently pointed out -- Dwight Eisenhower's warning has come true:  the military has become its own branch of government, uncontrolled by anyone and almost entirely unaccountable.  It virtually always gets what it wants.  The stated reasons for fighting in Afghanistan make so little sense that Klein is almost certainly right that the real causes are undisclosed.  It's extremely difficult to imagine a circumstance that could justify that.