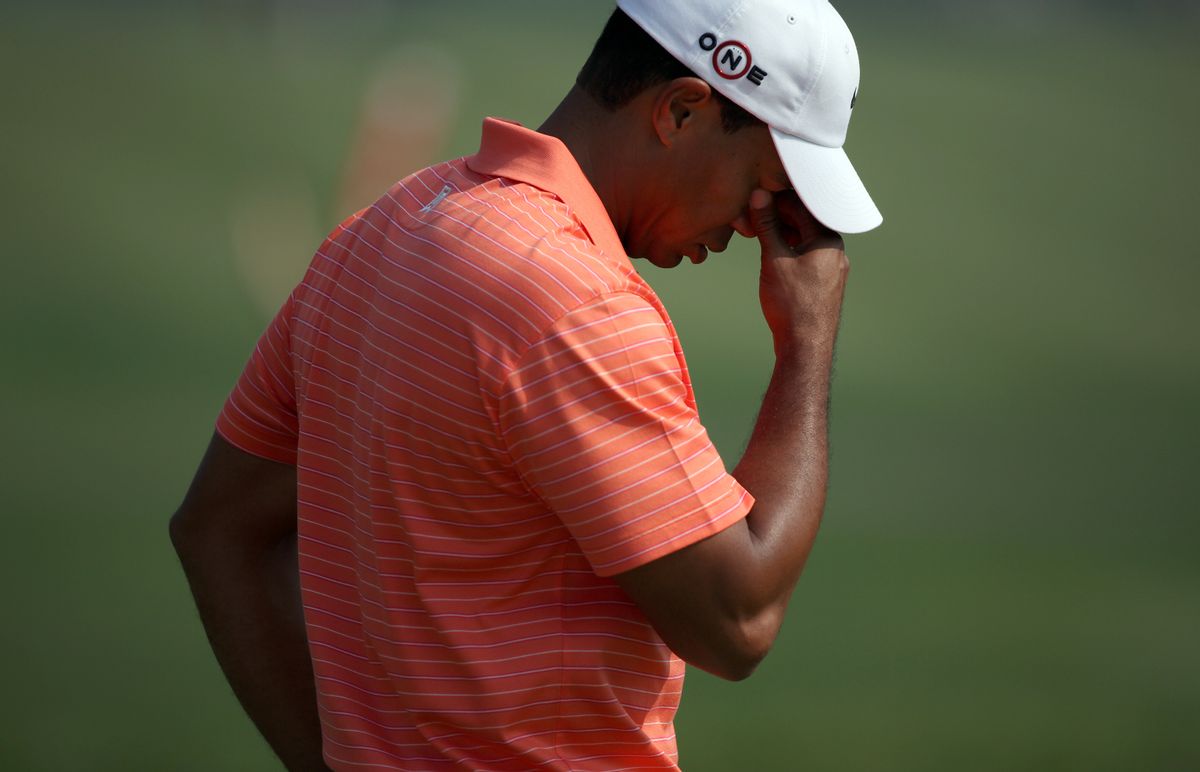 Tiger Woods of the U.S. reacts after taking a shot on the 14th hole during the 2009 HSBC Champions golf tournament in Shanghai November 5, 2009. REUTERS/Nir Elias (CHINA SPORT GOLF) (Reuters)
--

The Tiger Woods drama can't be bottomless -- or can it? Eventually we're bound to hit bedrock, but fear not, because that day is surely not this one. By the time you finish reading this sentence, another eight women will have come forward to say they tapped that PGA ass, and a lurid video or voice mail will have been released and reached 8 million hits on YouTube.

Truly, it's like striking tabloid oil. It's pretty tough to strike oil, however, without getting coated in a slick layer of suffocating goo. And even in this largest of larger-than-life dramas, there are still fragile, mistake-prone human beings. Which is how we got in this whole pickle in the first place.

Yesterday Radar Online reported that Child Protective Services investigated the Woods family regarding possible domestic violence involving a weapon. The site posted an "incident history" from the Florida Department of Children and Families dated Dec. 11. The document lists "units at gate" of the now infamous Windemere address for a "domestic in front of children" situation that ends in "negative contact" (presumably meaning they didn't get in to talk with the embattled sports star).

Fueled by the image of a raging, club-wielding Elin Nordegren, the blogosphere promptly erupted in new speculation that Nordegren "attacked" Woods. But as CBS reported Monday, the state is obliged to investigate any complaints that come in, which means any guesses regarding the welfare of Woods' 2-year-old-daughter, Sam, and 10-month-old son, Charlie, are highly premature. It is, however, a sobering reminder that in the midst of this ongoing train wreck, there are very young children whose parents are going to have work very, very hard to keep them clean from the taint of their strained relations, two high-profile people whose worlds changed forever on Thanksgiving night. But where do they go from here?

Radar Online says Nordegren's talking to a divorce lawyer. The Daily News says she'll stick it out for the kids. Nordegren herself, meanwhile, has been spotted pumping her own gas in Florida without her wedding ring.

That's surely not some random left-it-by-the-soap-dish-while-puttering-in-the-yard thing. If you've ever taken off a wedding ring, you know -- that symbol your beloved slipped on in front of all your friends and family and the whole world on the alleged happiest day of your life is not so lightly sloughed off. I don't know anyone who's ever done it painlessly, and I don't know anyone who wasn't making an unmistakable statement when they did so. (Elizabeth Edwards, who's still married to her famously philandering mate John, made a splash last year when she started making the rounds similarly bare-fingered.)

So while Tiger and many,  many,  many,  many of his conquests have issued their own statements, Nordegren seems content, for now, to let her finger do the talking. And it speaks volumes.