4. The disappearing governor became a role model for how not to have your midlife crisis 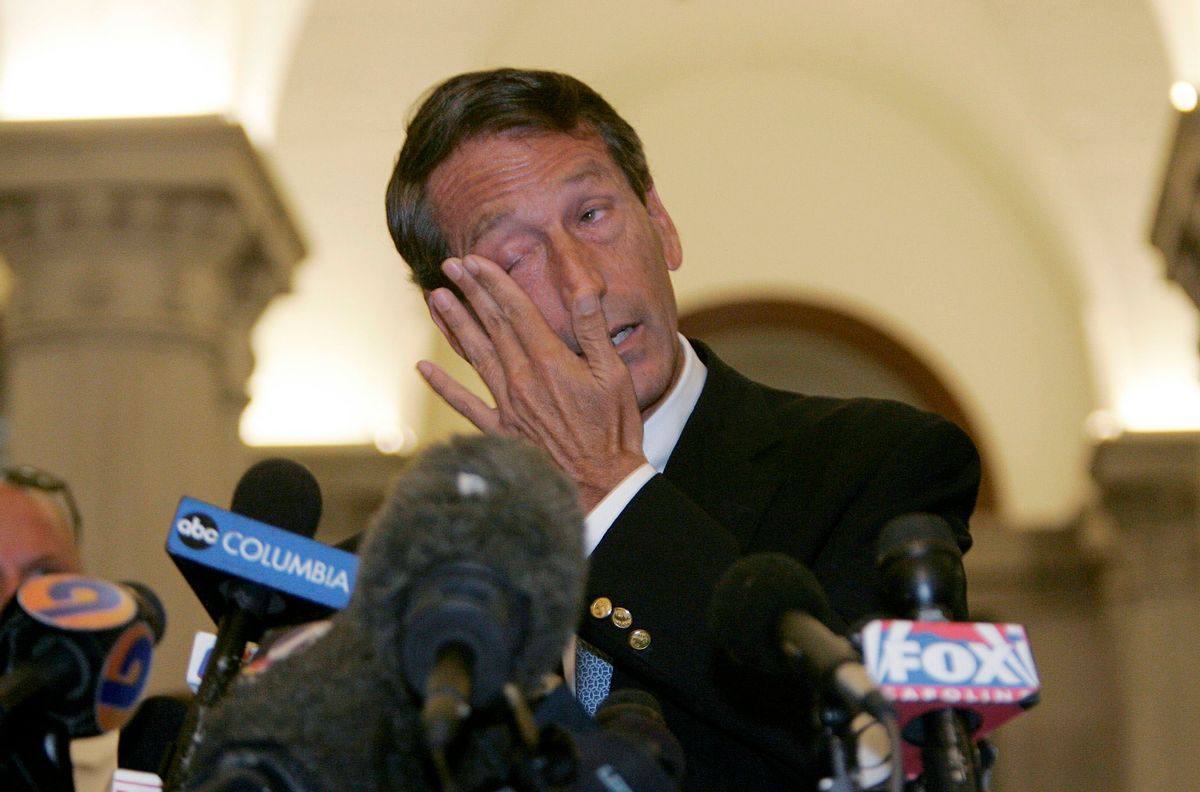 South Carolina Governor Mark Sanford wipes his eyes as he speaks to the media about his trip to Buenos Aires, Argentina and admits to an extramarital affair at the State House in Columbia, South Carolina, June 24, 2009. Governor Sanford said on Wednesday he was resigning as Chairman of the Republican Governors' Association after admitting to having an affair and being unfaithful to his wife. "I've been unfaithful to my wife," he told a news conference in the South Carolina capital of Columbia after returning from a secret private trip to Argentina. REUTERS/Erik Campos/The State (UNITED STATES POLITICS IMAGE OF THE DAY TOP PICTURE) (Reuters)
--

No, Gov. Mark Sanford, R-S.C., doesn't make our Crazy List because of that press conference, the political apologia to end all apologias. Of course, it was great theater: the admission of an extramarital affair by a conservative politician who, while in Congress, voted for the impeachment of Bill Clinton because of the president's "reprehensible" relationship with Monica Lewinsky. The Faulkner-cum-Fellini spectacle of this Southern presidential aspirant, flailing wildly on national TV without a script about his Argentine tryst, as curiously jubilant-looking young women beam in the background. The endearing performance by a tearful man who blamed it on "that whole sparking thing."

Look, we're suckers for love. The drama -- Sanford recklessly taking off to see his true love, causing a brief nationwide panic about his whereabouts, concocting a lame cover about being off the grid along the Appalachian trail before being caught at an airport by a reporter flying in from Buenos Aires -- was the stuff of Harlequin. Sanford made us recall Woody Allen's 17-year-old koan, "The heart wants what it wants." Our calloused hearts melted a tad more when his e-mails to his Argentine lover leaked to the press, in which he pleaded that "despite the best efforts of my head my heart cries out for you, your voice, your body, the touch of your lips, the touch of your finger tips and an even deeper connection to your soul."

Had it just ended there. But Sanford continued to talk. And talk. "This was a whole lot more than a simple affair, this was a love story," he told the AP. "A forbidden one, a tragic one, but a love story at the end of the day." It was like reliving the worst part about teenage love -- listening to your self-involved friend yammer endlessly about a stupid crush. Was he 4 rilz?

Maybe not. Wife Jenny Sanford released a statement that the couple had agreed to a trial separation two weeks before the whole spectacle. She knew about the affair, and he had some tough decisions to make. Later, Sanford had to repay the state for his travel to Argentina. His trip began to seem less like hopeless infatuation than selfish acting-out. And it recalled an earlier, more important lapse in Sanford's judgment this year: his cynical attempt to reject federal stimulus funds owed his beleaguered state. South Carolina's corridor of shame be damned -- for Sanford, it was an opportunity to shimmy for the GOP's tea-party right, and lay an early claim to the 2012 presidential nomination. Luckily, it didn't work.

Sanford has seemingly ducked impeachment. But while his wife has filed for divorce,  the good people of South Carolina seem to be willing to stand by their man, to give him another shot. Romantic fools. They can't say they haven't been warned.