Directors of the decade: No. 10 Michael Bay

You can love or hate the dumb, loud power of the man who typifies 21st-century Hollywood. But you can't escape it 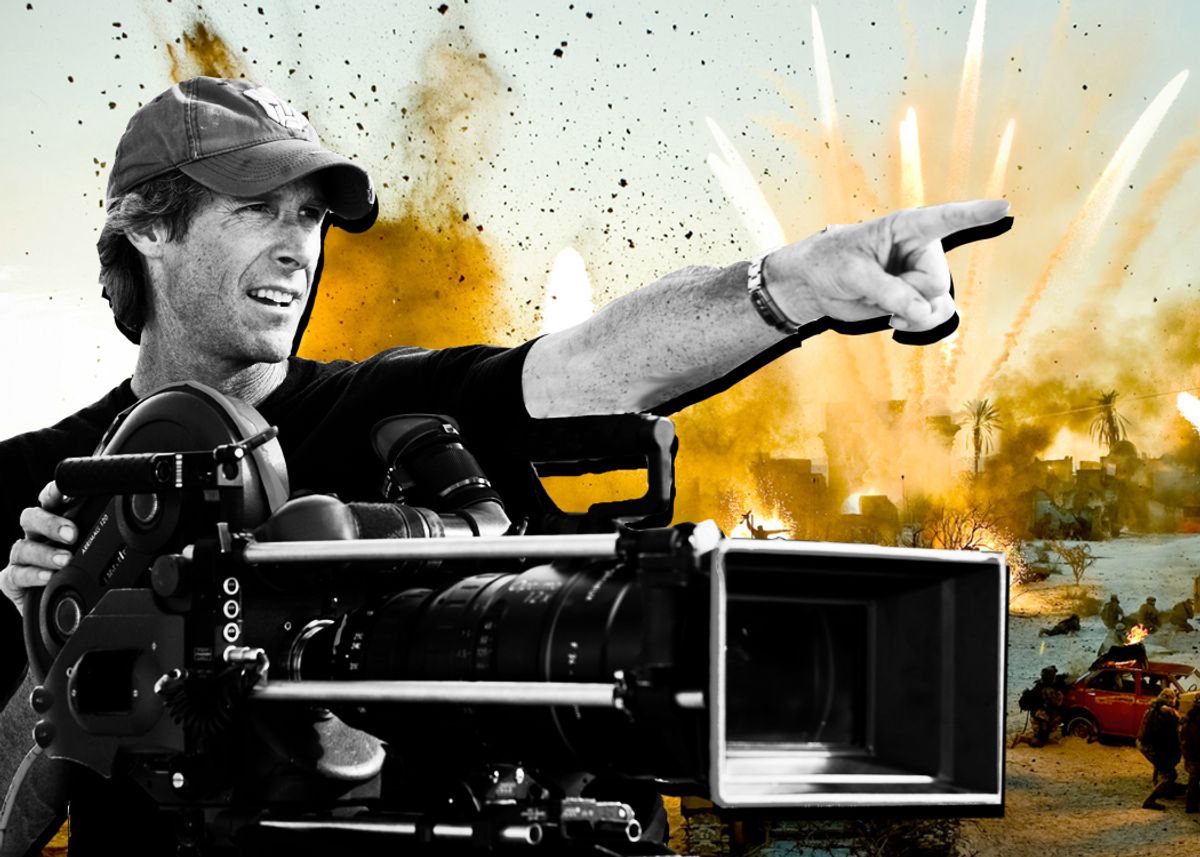 What Michael Bay movie is that from?

In spirit, all of them. But to truly experience the above you'd need to read it while riding a roller coaster. The car would have to be equipped with strobe lights, sparklers, a half-dozen monkeys battering you about the head and shoulders with ping-pong paddles and a boombox blasting the "Here comes the cavalry!" orchestral stylings of Bay's court composer, Hans Zimmer. The director of "Pearl Harbor" (2001), "Bad Boys II" (2003), "The Island" (2005), "Transformers" (2007) and "Transformers: Revenge of the Fallen" (2009) doesn't make movies, he makes rides. He's the filmmaker every studio boss dreams of -- the director as adrenaline pusher. He has a facile eye, staging terrific one-off sight gags (transfusion blood stored in Coke bottles in "Pearl Harbor"; the mini-droids morphing from kitchen appliances and Sam's brief trip to robot heaven in "Transformers 2") and tossing off dozens, even hundreds of gorgeous widescreen tableaux that most filmmakers would be lucky to compose once in a career.

Yet Bay never respects the rhythmic integrity of any image, rarely holding a shot, any shot, no matter how lovely or functional or potentially powerful, for longer than three seconds, dicing hundreds of thousands of feet of 35mm film into celluloid shrapnel and firing it at the audience's face. One is tempted to say that you can't fast-forward through Bay's films because they're already on fast forward, but that's not accurate. They don't so much leave out what immature viewers call the "boring parts" (characterization, exposition, atmosphere) as destabilize and disorient the viewer by investing the "boring parts" with the same trashy momentousness as Bay's set pieces. The apple-pie-scented flashbacks to the heroes' childhoods in "Pearl Harbor" are staged and edited with the same apocalyptic brio as the titular act of infamy -- hyped-up orchestral cues, jumpy editing, swooping crane shots, lens-against-the-tonsils mega-close-ups. The first quarter of "Transformers," which establishes the hero and his dull suburban existence, recalls the analog era, Cheerios-and-Huffy bikes Steven Spielberg for about two minutes, after which point the charm vanishes and Bay brings in the editing WeedEater, the bathroom humor and the eardrum-rattling Dolby FX (not just for the noise of robots transforming, but for such ostensibly mundane sounds as doors closing and feet running up stairs).

The film theorist David Bordwell classified these tics as aspects of "intensified continuity," a type of commercial filmmaking that sacrifices classical Hollywood values -- meticulously staged camera moves, judicious edits, a build-and-release approach to pacing -- on the studio-hallowed altar of "energy."

But such academic classifications, however accurate, don't capture Bay's relentlessness. The man doesn't do intensified continuity; he does pregnant-women-and-people-with-pacemakers-shouldn't-ride-this-ride continuity. His films go to 11.

Bay's student thesis film was a Coke commercial set on the deck of an aircraft carrier. After a few years of making music videos and ads, he became a protégé of producer Jerry Bruckheimer ("Top Gun," "Days of Thunder"). For a while he seemed just another purveyor of Bruckheimer's cocaine/silicone/gunpowder aesthetic. Reviewing Bay's debut feature, 1994's "Bad Boys," New Yorker critic Anthony Lane worried that Bruckheimer had opened a directing school. If so, the pupil has become the master.

Bay's first three hits, "Bad Boys," 1996's "The Rock" and 1998's "Armageddon," foretold the string of box-office triumphs he would enjoy in the first decade of the new century. The five features he released from 2001 to 2009 made $1 billion at the North American box office and twice that in foreign ticket sales and home video revenue. Even "Pearl Harbor," the film Bay-haters prayed would break his streak, earned $450 million worldwide. The aughts saw Bay evolve from a threat (critic Peter Rainer used the chop-chop style of "Armageddon" as the linchpin for a 1998 rant titled "All Climax") into an institution. Glossy action hacks like Simon West ("Lara Croft: Tomb Raider") would not exist without Bay. Nor would Fox's long-running counterterrorism drama "24," with its comic book sadism, epileptics-beware cutting, and gee-whiz appreciation for guns, cars, choppers and explosives. Doug Liman and Paul Greengrass, the directors of the "Bourne" franchise, revolutionized the espionage adventure with an unacknowledged (and probably unconscious) assist from Bay; with its wind-sprint pacing and "What the hell just happened?" approach to fight choreography, the trilogy's style is Bay with dirty fingernails. The increasingly glitzy, nervous, hyped-up filmmaking of Ridley Scott ("Gladiator," "Black Hawk Down") and Tony Scott ("Man on Fire," "Déjà Vu") throughout the aughts seems, in retrospect, driven partly by a desire to seem hipper and wilder than Bay.

And then there's the Michael Bay parody, practically its own subgenre. YouTube has become a hotbed of Bay spoofs; standouts include "Michael Bay Eating a Bowl of Cereal," "Michael Bay 'Pulp Fiction,'" and "If 'Titanic' Were Directed by Michael Bay." "Shaun of the Dead" and "Hot Fuzz," the first two features by writer-director Edgar Wright and his co-writer and leading man, Simon Pegg, are embroidered around loving sendups of Bay's style; their frantic editing, pointlessly busy camerawork and ominous "WHOOSH!" noises italicizing each shift in the hero's attention are spot-on mockeries of Bay's "No small moments" ethos.

Bay's career isn't just a career. It's an issue -- the decline of cinema craft and the replacement of poetry by intensity. Every time a new Bay film comes out, the issue must be hauled out and discussed. But the arguments against Bay are purely theoretical. His movies make Everest-size piles of money. "Transformers 2" was one of the worst reviewed films of the year, perhaps the decade; as of this writing, it has earned $834 million worldwide.

To dismiss his decade-long winning streak is to deny a fundamental truth about what it means to be an American skipping through the ruins of what cultural theorist Fredric Jameson has called "late capitalism." It's a landscape dominated by mass-produced products, images and notions -- many of them militaristic and/or materialistic in nature, all consciously or subconsciously reinforcing our bone-deep faith in bigger-newer-shinier-cooler-faster and lead-follow-or-get-out-of-the-way. This mentality -- a distinctively American hybrid of latent fascism and ingrained consumerism -- is the air we breathe, the blood that flows through our veins. It's our true national religion. The individual, told from birth that he's the captain of his own ship and not a slave pulling oars down in the galley, is unlikely to recognize the reality of his predicament, much less define himself against it.

Bay would never define himself against it. He recognizes it, then embraces it -- and his work gives everyone else permission to embrace it, too. Bay teases out the unacknowledged reality of our modern lives -- the distortion of individual psyches by a lifetime of exposure to consumerism and militarism -- and puts the distorting forces front-and-center in his films, not so that we can decry them, or even critique them, but so that we can revel in their power over us and worship them.

Snaking through each Bay film like a supercharged electrical cord is an intertwined faith in brute force and technological wizardry. In this regard, Steven Spielberg's championing of Bay -- he executive produced "The Island" and both "Transformers" films -- is strange. Bay is Spielberg's thug-jock doppelgänger, openly embracing values that Spielberg has traditionally regarded with distaste or skepticism. The latter spent much of his career either deflating machismo (Indiana Jones clonking his head on that shipboard mirror in "Raiders of the Lost Ark") or painting it as a desperate sort of playacting, a panicked inversion of male insecurity (see the great bit in "Jaws" where salty sea dog Robert Shaw crushes a beer can and fast-talking college boy Richard Dreyfuss responds by mashing a paper cup). And, "Saving Private Ryan" aside, Spielberg has always displayed a complex and altogether healthy attraction/repulsion to both high-tech voodoo and military swagger (the supposedly foolproof DNA manipulation gone horribly awry in "Jurassic Park" movies; the flying monkey-like troopers terrorizing private citizens in "Minority Report"; the corporate-trademarked trucks that hide a military/government conspiracy in "Close Encounters of the Third Kind").

Bay, in contrast, digs gadgets, thinks guns are awesome and never saw a skyline he didn't want to blow up. And he looooves a man in a uniform: a deep-core driller's jumpsuit, a Marine's dress blues or a SWAT team member's shiny black body armor -- he doesn't care what the uniform's owner is doing as long as there are photogenic flames or sparks behind him as he does it. He isn't just intrigued by force. He adores it. His fetish for manly men is a half-step removed from the mind-set that birthed the Village People and Kenneth Anger's "Fireworks" -- but, hilariously, Bay doesn't seem to realize it. There's no irony in his swagger, only iron. He's got a 19th-century sense of manhood -- one in which physical bravery and the willingness to inflict pain equal goodness.

His heroes, however verbally and intellectually nimble, cannot earn their fictional world's respect unless they've first stood tall alongside jock figures -- and on the jocks' terms. Super-soldier John Mason's admonition to bureaucrat Stanley Goodspeed in "The Rock" ("Losers always whine about their 'best.' Winners go home and fuck the prom queen") is played out on a pop-mythological canvas in the first "Transformers." Geeky suburban motor-mouth Sam Witwicky, a loser whose relationship with his parents consists mainly of denying that he's jerking off in his room, hooks up with a bitchy tomboy in a prom queen's body (suh-weeeet!) and earns the respect of square-jawed soldiers in the film's climactic showdown by tucking the film's McGuffin, the Cube, under one arm like a football and running it down a rubble-strewn avenue for a game-changing cosmic touchdown. The scenario would dazzle if "Flash Gordon" hadn't done it with more charm back in 1980 -- and if Bay didn't present Sam's end zone run not as a sendup of machismo, but as proof that the kid has a twig and berries.

On the eve of the release of Bay's 1998 smash "Armageddon," USA Today published a profile of the director that began, "He was just 13 when he copped his mom's Super 8, torched his train set with firecrackers and filmed the burning disaster. 'A little glue, the models burning, breathing in all those plastic fumes,' says a grinning Bay, sitting in his slate-and-glass bachelor pad." The flow of imagery in that last sentence -- a smoldering diorama morphing into a slate-and-glass bachelor pad -- has a cool inevitability, like the opening panels of a comic-book hero's origin story. Bay is a juggernaut clomping through our imaginations, his iron boots leaving footprints emblazoned with his initials. You cannot escape his awesome destructive power. Surrender or die.

Thanks to Sarah D. Bunting and Aaron Aradillas for their invaluable assistance with this series.