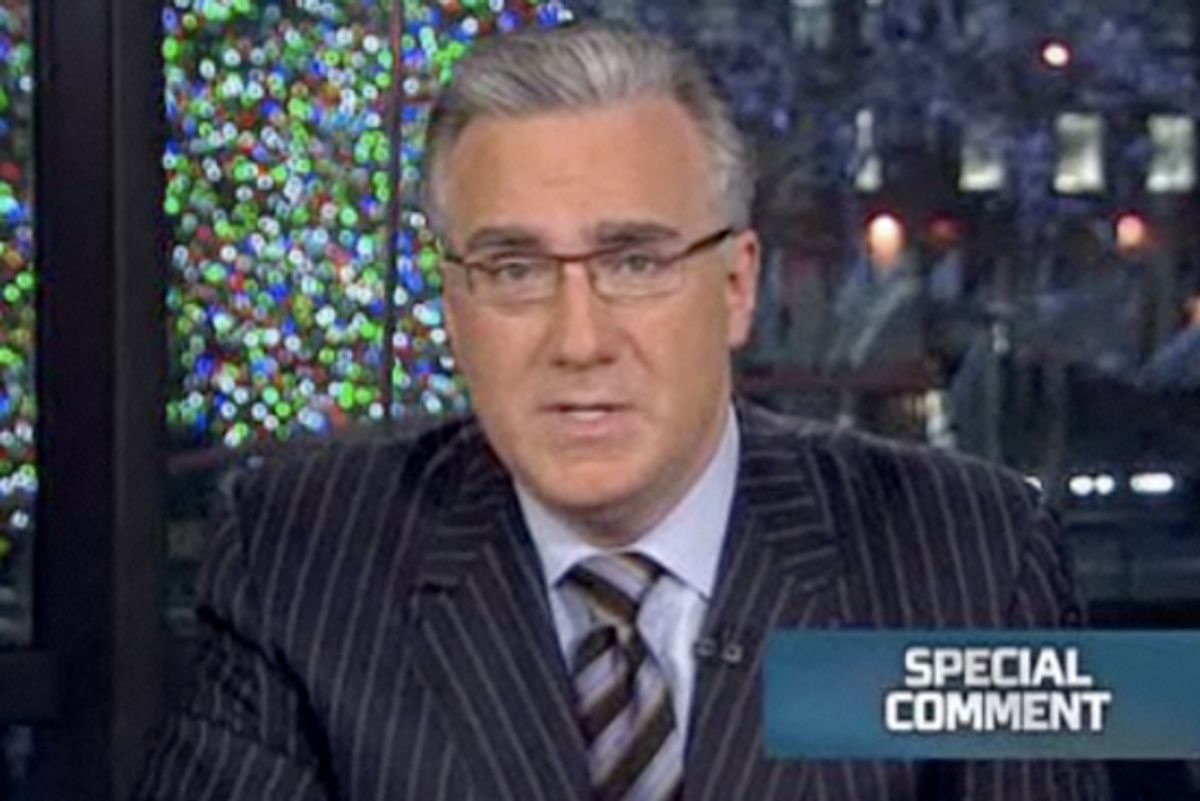 Keith Olbermann wants to be a martyr, and he wants you to join him.

The host of MSNBC's "Countdown" aired another of his "Special Comment" editorials on healthcare reform Wednesday night, reacting to the latest damage conservative Democrats have managed to inflict on the reform proposals. Many of his points were dead on; the insurance industry has too much clout in Washington, Republicans have contributed nothing to the debate and conservatives in the Senate Democratic caucus have pulled the legislation far to the right. So far, so good.

But like many progressive activists, Olbermann -- furious over what is probably the final death knell of a public insurance option -- has zeroed in on the legislation's mandate that everyone in the country buy insurance. Without a public option, this would mean everyone is required to become a customer of the very insurance industry that has demonstrated its power all year. So Olbermann wants to fight back.

If still the bill and this heinous mandate become law there is yet further reaction required. I call on all those whose conscience urges them to fight, to use the only weapon that will be left to us if this bill becomes law. We must not buy federally mandated insurance if this cheesy counterfeit of reform is all we can buy...

I am one of the self-insured, albeit by choice. And I hereby pledge that I will not buy this perversion of health care reform. Pass this at your peril, Senators, and sign it at yours, Mr. President. I will not buy this insurance. Brand me a lawbreaker if you choose. Fine me if you will. Jail me if you must.

Just like that, in two overwrought paragraphs, Olbermann took his argument down the path of reductio ad absurdum. We must not buy insurance? All year, progressives -- including Olbermann -- have highlighted the endless horror stories from people who don't have health insurance. Barely a month ago, Olbermann was citing, on air, a Harvard Medical School study that found nearly 45,000 Americans die each year because they don't have insurance. Now all of a sudden, he's "calling on all those whose conscience urges them to fight" to voluntarily give the coverage up to make a point?

This is, of course, an easy protest for Olbermann to make -- as he himself clearly recognized, noting that he's one of the self-insured "by choice." Even if he went without whatever insurance he's buying, Olbermann could afford to just write a check to cover the full cost of his medical needs. (And for that matter, the fine he's willing to pay for not having insurance would be only $95 in 2014, though it would rise to $750 by 2016.)

Most of us don't have that luxury, though. Take me, for instance. Even if I was persuaded by his argument, I couldn't join Olbermann's boycott; I've had insulin-dependent, or type 1, diabetes for 22 years. There was nothing I could do to avoid it -- it's genetic. But more important, it's expensive to treat. The insulin infusion pump I wear cost $5,000, which was covered by insurance. The continuous glucose monitor transmitter I also wear was another $2,000, also covered. I check my blood sugar six to eight times a day, using test strips that cost a little more than $1 each; my insurance also pays the full cost of those, because the company realizes it's cheaper to pay for me to check my blood sugar a lot now than to pay for the complications of uncontrolled diabetes later. The insulin I use in the pump would cost between $90 and $110 a vial without insurance, and I go through two or three vials each month. Add in a month's worth of pump infusion sets ($116), reservoirs ($33) and glucose monitoring sensors ($350), and the costs just for managing my diabetes add up to more than $1,000. Then there's the quarterly visits to an endocrinologist, twice-yearly dental checkups, an annual eye exam and a few other prescriptions. Pretty soon, I'm looking at taking on a second mortgage payment each month just to stand on Olbermann's idea of principle. Sure, my insurance premiums and co-pays come to several thousand dollars a year. But even buying insurance on the open market would be cheaper for me than paying for all that stuff out of pocket if I wasn't covered through my wife's employer. Though of course, if the healthcare bill fails, and its insurance industry regulations don't become law, I couldn't buy insurance on the open market anyway, because I have a pre-existing condition.

So the only people, really, who could afford to "use the only weapon left" to protest the healthcare bill along with Olbermann would be healthy people, who don't need insurance to begin with. And those healthy people are also where the argument against the individual mandate begins to fall apart. The reason it's worth swallowing the individual mandate is because that's the only way to make insurance affordable for anyone who might actually get sick and need it. Insurance providers -- whether it's Blue Cross or a federal public option -- need to have some healthy people in their risk pool to offset the costs of the sick people. Otherwise, if they've got to shell out $1,000 a month to keep me alive and more or less healthy, they'd have to charge me at least that much just to stay in business. (Unfortunately, as we all know, they also like to tack a little extra on to pay their CEOs extravagantly.) That's why large employers can afford to insure their workers, and why many small businesses can't -- the risk pools aren't big enough.

One part of the healthcare legislation that pretty much everyone likes is the new regulation forcing insurers to cover everyone, no matter what kind of pre-existing conditions they might have. But without an individual mandate, there won't be enough healthy customers, who are cheap to insure, to balance out all the sick people who would be newly eligible for coverage. Premiums would rise even faster for the people who most need insurance than they already are. In what's known as an insurance death spiral, only the most expensive, sickest patients would remain in the risk pool.

What's galling about the mandate in a bill with no public option, of course, is that it essentially guarantees the insurance industry a steady revenue stream and millions of new customers. That's frustrating -- infuriating, even. But it shouldn't be a deal-breaker. Would there be people, under the reform legislation, who can't afford insurance premiums? Unfortunately, there probably would -- but the answer to that is to increase the federal subsidies, not kill the bill or remove the individual mandate. After all, anyone who might not be able to afford insurance in the future already can't afford it now. It's hard to imagine that there are people who don't have insurance but are holding out only because they don't want to become customers of the private insurance business.

The point of this reform legislation -- as I wrote the other day, and as White House communications director Dan Pfeiffer wrote Wednesday -- should be to expand access to healthcare, which every industrial nation except ours considers a basic human right, not to punish insurance companies for the many, many sins they've committed in the past. Plenty of those other industrial nations require people to buy insurance, the same way this bill would do. Is this the ideal answer to the healthcare system's flaws? No. But is it a decent place to start? Yes. Olbermann should keep that in mind, and push to fix -- not kill -- the healthcare bill. Most of us can't afford to do it his way.