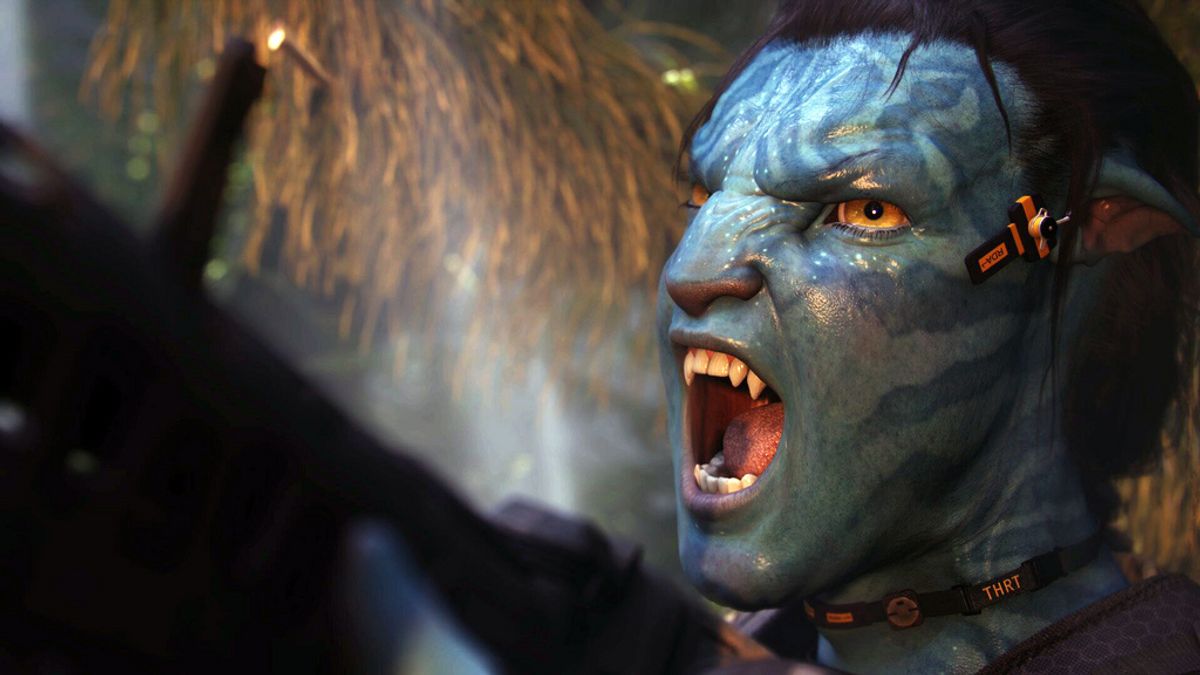 The problem with taking 15 years to bring audiences the future of filmmaking is that someone else is bound to get to the future before you do. And while there are certain technical effects in James Cameron's "Avatar" that aren't quite like anything we've ever seen before, the movie is hardly a historical event, or even a grand achievement. It is a very expensive-looking, very flashy entertainment, albeit one that groans under the weight of clumsy storytelling in the second half and features some of the most godawful dialogue this side of "Attack of the Clones." Sensitive viewers will also want to note that two characters engage in tasteful sex under a special tree that bears a close resemblance to a bachelor-pad fiber-optic lamp. Clearly, Cameron has looked everywhere for inspiration -- nature, art, the Spencer's Gifts catalog -- and this tree, in particular, isn't just any old plug-in prop. "There is something really interesting going on in there biologically," says the brainy scientist character played by Sigourney Weaver, and believe you me, she doesn't know the half of it.

"Avatar" would be great fun, if only Cameron -- the picture's writer, director, producer and editor -- had a sense of humor about himself, which he clearly doesn't. Instead Cameron -- who is no longer just King of the World but Emperor of the Universe -- has to make it clear he's addressing grand themes: Characters must prove their bravery, their humility as human beings and their sensitivity to indigenous peoples. Like those "revolutionary" westerns directors kept making in the early '70s, or like the later "Dances With Wolves," "Avatar" is Cameron's "Let's be fair to the Indians" movie. And while Cameron's political stand is solidly liberal -- he takes a clear position, in particular, on the corporatization of military power -- this isn't a picture fleshed out with deep, multifaceted ideas. Cameron is less a sage than a canny bonehead. Characters signal their motives and intentions with thundering dialogue, mouthed by the actors in ways that suggest the guy at the top has a tin ear, or at least some pretty strange ideas about punctuation. "It'd be a fresh start. In a new world. And the pay is good. Very good," says the movie's hero, Jake Sully (Sam Worthington), in an early scene, as he begins to explain his mission, and the movie's premise.

Jake is a wheelchair-bound Marine, injured in the line of duty, and because he happens to have the right DNA, he's been recruited to travel to a distant planet called Pandora, where a bunch of suits, along with the U.S. military and some scientist types, have set up shop. Their goal is to mine a special ore -- its name, "unobtanium," is one of the movie's only truly witty jokes -- that will allow them to solve the Earth's energy crisis. The big drag is that to get the magic rocks, they need to relocate, either by force or reason, the relatively peaceful Pandora natives, very tall blue people with pointed ears known as the Na'vi.

The atmosphere on Pandora is poisonous to humans, so the Earth bigwigs have developed something called the Avatar Program, in which human DNA is combined with Na'vi DNA to create remote-controlled half-human, half-Na'vi creatures who can safely breathe Pandora air. In his avatar incarnation, Jake can walk, as well as run and hunt and generally enjoy all the physical freedom he'd been deprived of on Earth. He also meets, and falls in love with, a beautiful Na'vi named Neytiri. (Although the Na'vis are all animated via performance-capture techniques, Neytiri is played by, and even somewhat resembles, the lanky, graceful actress Zoe Saldana.) None of the other avatars have been accepted by the natives, but Neytiri recognizes something special in Jake, and before long he's been embraced, cautiously, by the local tribe. That also, of course, makes him instantly invaluable to his coarse, unobtanium-greedy fellow Earthlings, among them an obnoxious, wheeler-dealer businessguy played by Giovanni Ribisi and a devious, gung-ho Marine played by Stephen Lang.

"Avatar," as its press notes announce, is designed to "deliver a fully immersive cinematic experience of a new kind, where the revolutionary technology invented to make the film disappears into the emotion of the characters and the sweep of the story." That word "immersive" means that you're not just watching "Avatar" -- you're soaking in it. The movie was made, and is designed to be seen, in 3-D, and no matter what anyone -- particularly the movie's studio, 20th Century Fox -- tries to tell you, the technology and not the story is the big selling point here: If a less famous and less nakedly self-promotional director had made the exact same story with a bunch of actors in blue latex, the Fandango ticket sales wouldn't be going through the roof. And if the technology is as revolutionary as Cameron has been claiming for years now, isn't it disingenuous for the publicity to turn around and suggest that we're really not supposed to notice it? In "Avatar," the technology is everything.

And it does, at least, amount to something. Whatever the flaws of "Avatar" may be, Cameron does use performance-capture more effectively than any filmmaker has yet, and that includes el-creepo performance-capture high priest Robert Zemeckis, whose "Polar Express" has served as the basis for many of my recurring Santa-driven nightmares. While I hate to see an actress as charming as Saldana disappear into the skin of a technogimmick, looking at the graceful, stretched-out blue creature she's been transformed into, I could see traces of the same performer who so daintily stubbed out a cigarette with her pink toe shoe in the 2000 teen ballet drama "Center Stage."

On the other hand, Worthington, whose character is duller and flatter than the one Saldana plays, isn't particularly improved by technology: Both as a human and as a faux-Na'vi, he repeats the same sullen performance he gave in "Terminator Salvation." Although with all of these performance-capture characters -- no matter how much they may resemble their real-life counterparts -- it's hard to discern subtleties of expression. The Na'vis are intriguingly designed: Their faces, with their elongated almond eyes, resemble the faun in Guillermo del Toro's "Pan's Labyrinth," although unlike that character, they also have shimmery skin and pale tiger stripes. They wear their hair in long braids that end in a cluster of tentacles with nerve endings; these anemones can be plugged into the tails of various forest creatures, forming a kind of natural circuit. When Jake, as he's being schooled in Na'vi hunting techniques by Neytiri, mounts a magnificent flying beastie, he's not just riding it, he's communing with it.

Cameron takes all this "We must be one with nature" business very seriously -- so seriously that he doesn't seem to realize that one of the sacred Na'vi communal rituals, as he's dramatized it, looks an awful lot like a Beverly Hills yoga class. Still, Cameron and his team of designers and technicians (as well as the director of photography, Mauro Fiore) have managed to come up with some lovely, fanciful details. I was particularly taken with the delicacy of the movie's color palette, especially for such a flashy, big-budget crowd pleaser. At one point Jake, exploring the wonders of a Pandora rain forest, comes upon a stand of giant, funnel-like mushrooms that shrink away from his touch and disappear, shyly, into the earth. Their color is an earthy, translucent pinkish-red, in a tone that takes more thought and consideration than the bright, hothouse color another filmmaker might have automatically gone for.

The midsection of "Avatar," in which Jake discovers Pandora's glorious flora and fauna, has some lyricism. But in the last third, when the tanks and helicopters start moving in, the picture begins to look no more innovative than a sophisticated computer game. Cameron's message may be strictly antiwar, but the second half of his movie relies on the brutalities of combat to whip up excitement: War is wrong, but at least it's dynamic, and yet Cameron doesn't stage these sequences in a particularly compelling way. There's another problem with making a two-and-a-half-hour long 3-D feature, one that that has nothing to do with pacing: 3-D movies aren't more realistic than 2-D movies; they're hyperrealistic, which means they're more physically demanding to watch, and eyestrain is no filmmaker's friend. Stiff, awkward performances don't help much, either. Weaver's character -- her name is Dr. Augustine, and she's modeled, at least loosely, on Ripley from the "Alien" films -- is most believable when, in her human incarnation, she's puffing on her nearly ever-present cigarettes. (A chain-smoking scientist: Now there's something you don't see in the movies every day. I wish Cameron would show us more of his naughtier side.) But like everyone else here, Weaver stumbles through the picture's cartoony dialogue. At one point Stephen Lang's toughie Marine, annoyed by the fact that the Na'vi won't just hand over their sacred turf, barks, "We will fight terror with terror." It's sub-comic-book prose made deadly earnest.

You can make dumb dialogue work if you're serving up a classic Saturday matinee-style entertainment. But if you're out to change the face of filmmaking, you have to work much harder at a lot of the things Cameron just shrugs off. You need well-rounded characters, and a great story that, even if it follows a familiar template, illuminates some angle of human experience in a fresh way.

And you need to give your actors something to do. Looking at "Avatar," you can see why the thing took a thousand years to make -- every frame has been fussed over. But the actors don't live in the movie so much as drift through it like zombies -- they seem to know, subconsciously, that in Cameron's grand vision, they're beside the point, obsolete. "Avatar" isn't about actors or characters or even about story; it's about special effects, which is fine as far as it goes. But for a movie that stresses how important it is for us to stay connected with nature, to keep our ponytails plugged into the life force, "Avatar" is peculiarly bloodless. It's a remote-control movie experience, a high-tech "wish you were here" scribbled on a very expensive postcard. You don't have to be fully present to experience "Avatar"; all you have to do is show up.