Dave Arnold and Nils Noren are going to make your dinner a little freakier ... and maybe easier to cook 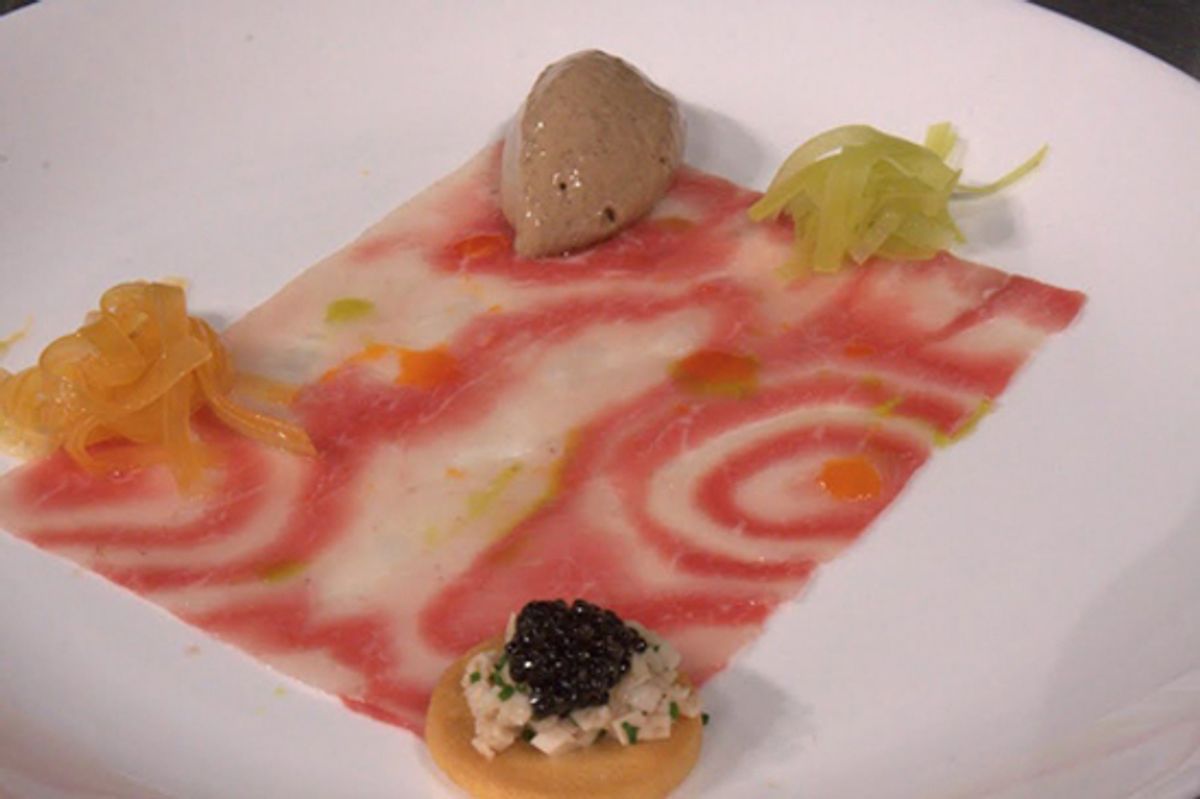 Class is starting, and Dave Arnold has a cocktail in one hand and a stirrer in the other. Only, since Dave is the French Culinary Institute's director of culinary technology, that stirrer is a metal rod so hot it's red to the core. "Folks at home might not want to do this," he says, plunging the poker into his glass, barely moving to avoid the flames shooting back at him. "There's a perception that it's unsafe," he cracks as I watch fire singe his hair.

He's calm, swirling the poker in the liquor inferno like he was stirring sugar into midsummer iced tea. "The intense heat allows you to actually caramelize the sugars in the drink," he tells me, which is something you could never do by heating it on a stove without boiling off all the water, which, you know, wouldn't make for a very liquid drink.

I take a sip. It was right tasty before, a bright mix of ale, cognac and lemon, but now it's incredible, totally transformed, tasting of toast and butter, darkly complex with a subdued sweetness. Still, mixing a drink with a flaming sword is not among the most technologically advanced of Dave's tricks.

He and Nils Noren, the institute's vice-president of culinary and pastry arts, are superstars of the cooking-geek firmament. Their latest blog post tells you how to make ketchup that melts and hardens like chocolate, and one of their greatest hits is turning fish into a wood-print. (Huh? Right ... watch the video.) But it's not just navel-gazing showoff stuff. Their goal is to push the boundaries of what we think is possible in food and make what they find useful for chefs and, in some cases, ambitious home cooks.

I, frankly, am not ambitious enough to build a low-temperature rotary evaporator distiller for my sauces, but I appreciate their work for how inspired they are. I confess that I also tasted in my glass of Red Hot Ale the giddy flavor of novelty, but it turns out that the idea is older than any suspenders-clad hipster bartender would dare to go, back to colonial taverns that kept loggerheads hot in the fire for their drinks. (Maybe because no one's remade a fashionable tri-corner hat yet?) It's the obscurity of this inspiration -- in a sense, this respect for tradition -- that convinces me that Dave and Nils aren't enfants terribles, out to destroy the old in the name of their egos, but rather genuinely excited and profoundly creative cooks, just ones with lots of toys.

Recently, a few days after their holiday cocktail class, I sat down with them to talk about that creative process, what they think we'll all gain from their work, and how much garlic you can eat in one sitting.

Let's start with how you got into this. Nils, you moved on from being an accomplished chef to being an administrator at this culinary school, and Dave, your background isn't even in food. Why does this lab even exist?

Nils: Well, it doesn't hurt that it's fun; I don't actually get to work on this stuff enough. Research and development is such an important part of what universities do, and we think that's what this school should be doing. We want to support the culinary industry, and these experiments are hard for chefs to do in restaurants, because of time, space and the demands of running a kitchen, when you have service to prep for and orders coming in. At Aquavit, where I was the chef, we were doing some of these things, but didn't really talk about it.

Dave: Right. We publicize the technology because we want people to use it, not because the customer needs to know. That's when you really win: when it just tastes amazing and for the customer, it's not about the technology. Here, we get to go overboard to get the very best possible result. But for every 10 things we do that won't go very far outside of these walls, there's one that can have real lasting impact in the way people cook.

Take cooking a burger. You can: 1) overcook it, 2) leave it underdone in the middle, where it's all squashy or 3) use a low, even temperature to get the whole burger the right texture. That's why people sous-vide. You don't want to sous-vide a burger, because the first thing about burgers is you want to be gentle with the patty to keep it tender, and the vacuum packing in sous-vide will crush the patty. So we learned to flash-fry the patty to set the shape, then put it in a ziplock with butter or beef fat, so it's floating in there, all happy, and you can cook the pouch in a slow water bath to the right temperature and flash-fry it again to finish browning it.

Sous-vide is actually a great example of how industrial and fine-dining techniques can become useful at home. The technology for maintaining water at very steady temperatures was originally for medicine, and then made its way into fine dining. But you know, it's great at home for parties. It switches the work from service time to prep time; all your food can sit, hot and ready to go any time. I had a bunch of people over for steaks, and the whole party was in a water bath.

It sounds like we're talking about a different kind of party now. Hot tubs aside, how does your partnership work?

Dave: Ha. My background was in philosophy and sculpture. Anyone who says they "do art for themselves" is lying. Art is all about eliciting reaction, and cooking gives a lot of the same sort of immediate feedback.

Nils: I started cooking because I couldn't make a living playing reggae in Sweden.

Dave: In art, most pressure is internally driven, except when you have shows. So I wait until just after it's impossible to get things done, and then I get to work. But Nils is very organized. He has to be, with his experience running kitchens. And we’ve been doing this for three years. We respect and trust each other's approach and palate.

Nils: We often don't even need to talk. We can work and taste something and know exactly how we want it.

Dave: It's interesting when we disagree, though, because while there's room for opinion, most of the time it's just right and wrong. I probably shouldn't say that, but you know, there's delicious, and there's not so much.

So how do get you inspired to do your projects?

Dave: Sometimes it just starts with "I wonder ..." David Chang came up to us once to talk about ike jime [a Japanese fish slaughtering technique, supposed to produce better flavor and texture]. He was like, "Harold McGee says it's bullshit." So we say, "Well, is it bullshit?" and it started from there. We've done a bunch of experiments on this, to the point of anesthetizing the fish before killing it, and we're getting amazing results.

Nils: We often return to our experiments. We might stop working on something, but we're never done with it.

Dave: You never stop learning about something. You might think you're pretty close, but then something can throw you for a loop and you start over, excited to try it again.

What is a project you've done that will have long-range influence?

Nils: I think our pressure cooker work is really exciting. Most people use pressure cookers to just cook things faster. But you can make amazing stock in it. And we’ve found that you can use it to create new flavors -- the high heat and pressure can kill sulfur, for instance. So onions become so sweet you can make them into ice cream. You can make horseradish that has all its flavor without the pungent heat, and you'll find that it's sweet, because it's a root vegetable after all. You can make garlic that you can eat whole -- two whole heads and still be able to talk to people. You can't even do that with roasted garlic.

Nils: Yeah, that's just kind of how he is.

You can follow the adventures of Dave and Nils on their blog, cookingissues.wordpress.com, where they also post information about upcoming classes.