Emily Blunt shines as the tough-minded British queen in this lush, and even sexy, period romance 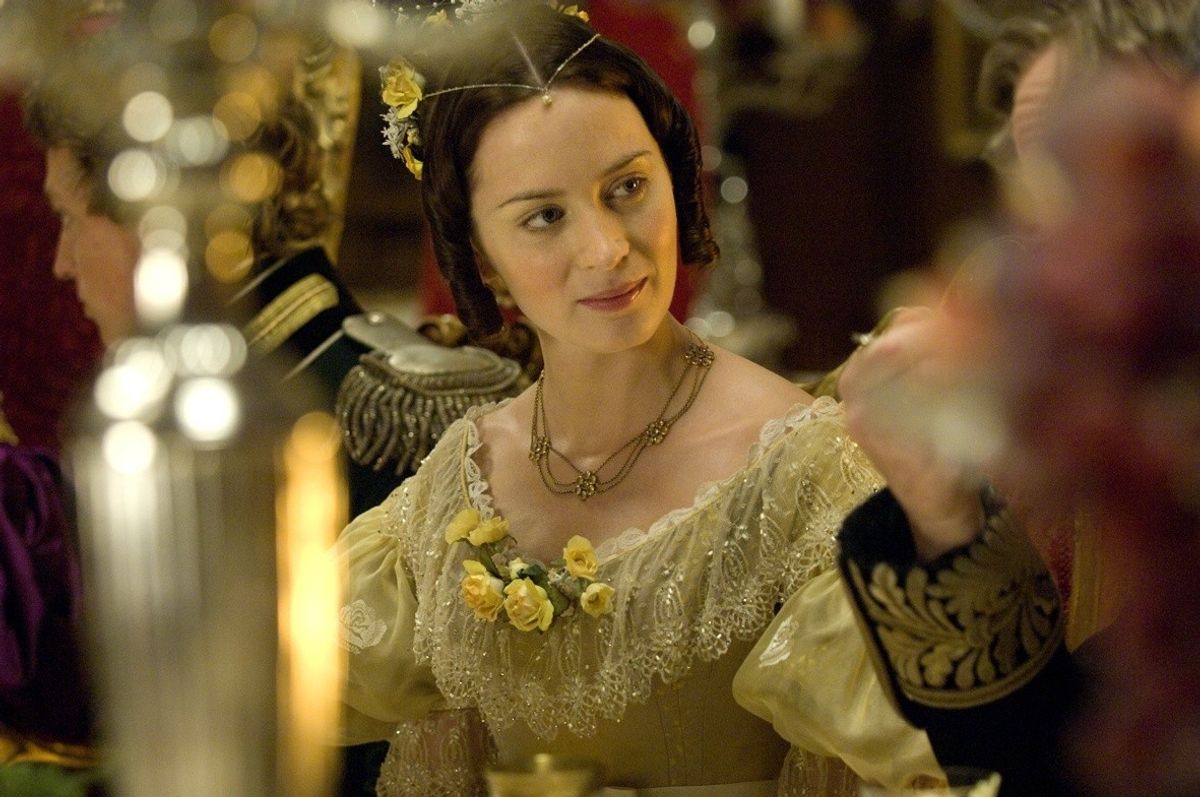 Emily Blunt in "The Young Victoria"
--

There's a reason Queen Victoria, who ruled Great Britain from 1837 to 1901, inspired one of the Kinks' most joyous songs: The band's 1969 "Victoria" opens with the words "Long ago life was clean/Sex was bad and obscene," a recognition of England's stuffy, repressive past that sounds like a rebuke -- until the point, in the next verse, where the songwriting brothers Ray and Dave Davies declare, with irony-free affection, "I was born, lucky me/In a land that I love." Victoria, the country's longest-reigning queen, spent much of the 19th century getting her country ready for the 20th, preparing, unwittingly but dutifully, for two destructive and horrific wars, for the collapse of the empire she herself helped build, even for free love and rock 'n' roll. No wonder the Kinks loved all she represented, flaws and attributes alike.

"The Young Victoria," directed by Jean-Marc Vallée, with a screenplay by Julian Fellowes, isn't technically a rock 'n' roll movie. But behind its historical-drama flourishes, its lush, painterly cinematography and its somewhat romanticized (but perhaps not too romanticized, at least in movie terms) love story, it has a rock 'n' roll heart. Emily Blunt plays the young queen, and the movie wastes no time outlining the challenges and power struggles that dogged her before and after her coronation. Her uncle, King William (played by Jim Broadbent, in a wonderful, woolly hairdo), isn't going to be king forever, and Victoria is next in line for the throne. Her mother, the Duchess of Kent (a suitably thin-lipped Miranda Richardson), is scheming with her advisor, Sir John Conroy (Mark Strong), to seize whatever power Victoria will eventually have.

Victoria hates being a pawn, and so she resists the tentative advances of her handsome and intelligent cousin, Albert (Rupert Friend), the nephew of her uncle, King Leopold of Belgium (Thomas Kretschmann) -- she feels her mother is trying to engineer the match and thus her future, and she'll have none of it. After William's death, Victoria is crowned queen at age 18, and she gratefully accepts the advice and friendship of the prime minister, Lord Melbourne (Paul Bettany, in a smallish but nicely shaded performance). She may even be falling in love with him -- except she's also forming a close, long-distance friendship with Albert, who is just as resistant to parental manipulation as she is. Albert, what's more, is fun to be with, and he shares many of her ideals.

He also happens to be played by one of the most fabulous-looking and charming young English actors working today. And watching the slow, cautious courtship between Victoria and Albert is so pleasurable, so surprisingly not-boring, that it doesn't matter how much of the ending we already know. "The Young Victoria" starts out a bit slowly, but that's not because Vallée (who is French-Canadian) is out to make a stuffy historical drama; he's merely allowing himself the luxury of sinking slowly into this tufted velvet cushion of a story. And Vallée doesn't focus just on the love angle: He lays out with clarity the various political machinations and frustrations -- including scandals, assassination attempts and complicated decisions with potentially dire consequences -- the young queen had to face. Vallée and Fellowes make it clear Victoria was a tough-minded, self-determined woman with a job to do, not a dainty maiden waiting for her handsome prince.

Blunt, who's already distinguished herself in pictures like "The Devil Wears Prada," is wonderful here. Her performance is purposeful and resolute, but she knows when to let Victoria's softness show, too. Her girlish flutteriness as she proposes to Albert -- yes, that's how it went -- is one of the loveliest and most underplayed little moments I've seen at the movies all year. Friend meets her challenge, boldly, in every scene -- he's a serene presence, not necessarily a smolderingly sexy one, and that works to his advantage: His intelligence always glows through his handsomeness, and it wins the day.

It doesn't hurt that the movie is so carefully shot and lit, by cinematographer Hagan Bogdanski, that its subjects look almost unreally beautiful -- their skin has the creamy, slightly translucent glow found in old oil portraits. And we know from the start this Victoria and Albert are made for each other. They even have his-and-hers cleft chins.

That's not to say Victoria and Albert don't have their problems. Vallée gives a sense of their clashes and of the ways in which Victoria sometimes felt, at the beginning, that her authority was being undermined by her husband. But the picture overall gives a sense of a partnership that was surprisingly modern, and it hints, discreetly, that the sex was great too. Albert and Victoria bore nine children, before Albert's death at age 42. The movie tells us that his grieving widow had her servants lay out his clothes every morning for the rest of her life, as if he were merely away on a trip and not gone forever. It may be true, as the Kinks suggested of an older England, that long ago, life was clean. But who can ever know what goes on behind closed doors?