Tens of thousands of people have already been evacuated 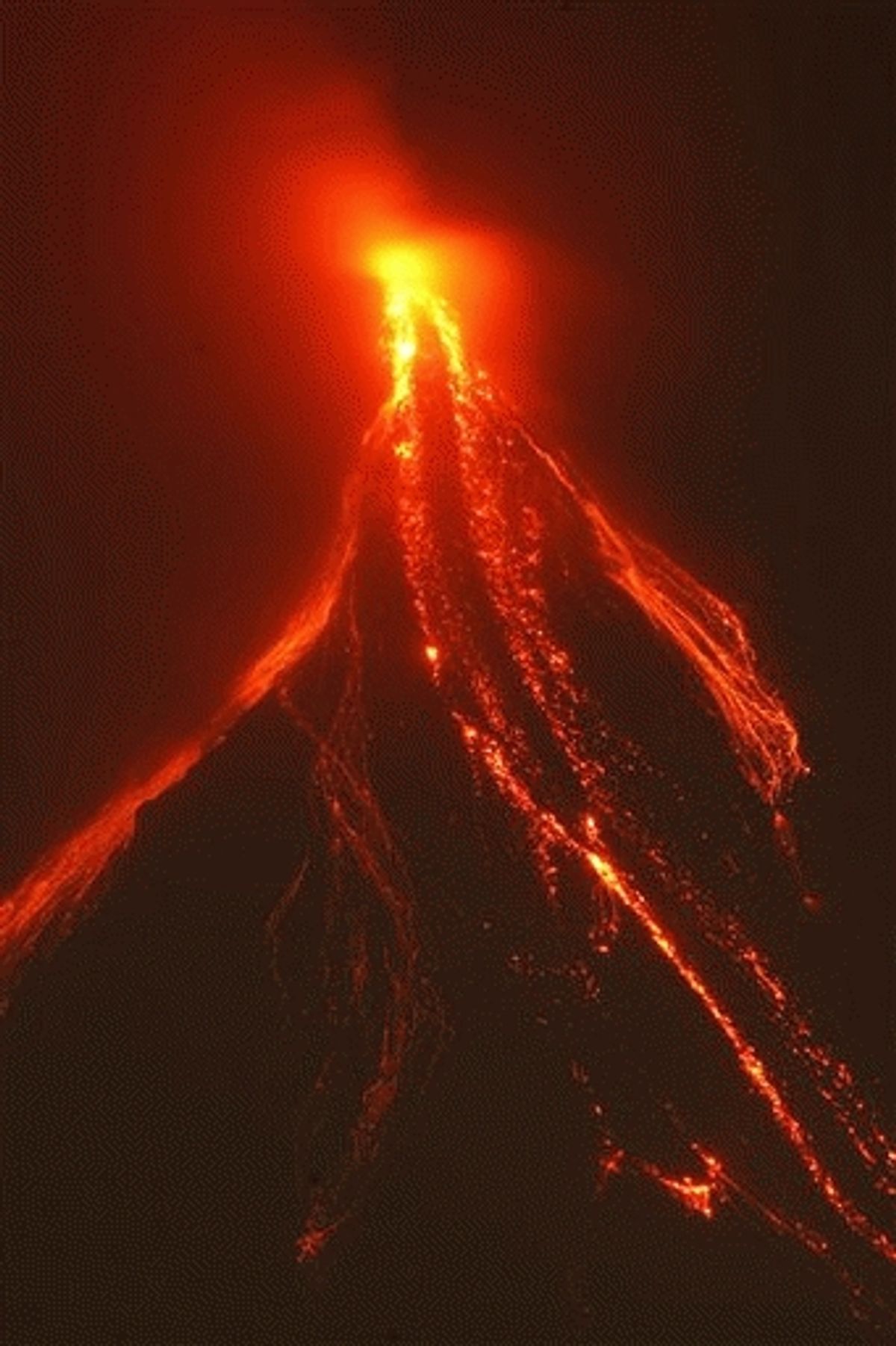 Lava continues to cascade down the slopes of Mayon volcano as viewed from Legazpi city in Albay province, 500 kilometers southeast of Manila, Philippines, Sunday .
--

Philippine troops on Monday pressed the last 3,000 villagers who have refused to heed government warnings to leave the danger zone around a volcano that experts say is ready to erupt.

Tens of thousands of people have already been evacuated from the foothills of Mayon, which on Monday emitted lava fountains, powerful booming noises and other signs of an approaching eruption. But authorities are having trouble keeping villagers away from their homes and farms, said Gov. Joey Salceda.

"There are people who have been evacuated three times, and we sigh: 'You again?' " said Salceda of central Albay province. "We've been playing cat and mouse with them."

After a week of puffing out ash and sending bursts of lava trickling down its steep slopes, the 8,070-foot (2,460-meter) mountain overlooking the Gulf of Albay and Legazpi city shook with nearly 2,000 volcanic earthquakes and tremors between Sunday and Monday, state volcanologists said.

The emission of sulfur dioxide -- an indication of magma rising inside the volcano -- jumped to 6,000 tons per day from the normal 500, said the Philippine Institute of Volcanology and Seismology. It also reported "audible booming and rumbling sounds" in the eastern flank of the volcano, accompanied by intensified crater glow at night.

Scientists raised the alert level Sunday to one step below a hazardous eruption, saying one was possible within days. The only higher level is when a major eruption is already in progress.

Army troops and police added more patrols to enforce a five-mile (eight-kilometer) exclusion zone around the mountain, Salceda said. The area is about 210 miles (340 kilometers) southeast of Manila.

More than 44,000 residents were given sleeping mats and food inside school buildings, gyms and other emergency shelters, but some have still been spotted checking on their farms in the prohibited zone.

About 3,000 more villagers have held out, staying behind on the fringes of the danger zone out of concern for their homes and belongings. Many have been evacuated only to come back to tend to farms and property.

Army troops have been deployed to persuade them to move to safety, said Jukes Nunez, a disaster management official.

"We won't bodily carry them away because that will violate their rights," Nunez told The Associated Press. "But we've sent troops to persuade and nag them nonstop to move to safer areas."

A major eruption could trigger pyroclastic flows -- superheated gas and volcanic debris that race down the slopes at very high speeds, vaporizing everything in their path. More extensive explosions of ash could drift toward nearby towns and cities. The provincial capital of Legazpi is about nine miles (15 kilometers) away.

In Mayon's other eruptions in recent years, pyroclastic flows had reached up to four miles (six kilometers) from the crater, Salceda said.

"The probability of survival in an eruption is zero if you're in the danger area. The solution is obviously distance," he told the AP.

The first recorded eruption was in 1616 but the most destructive came in 1814, killing more than 1,200 people and burying a town in volcanic mud. The ruins of the church in Cagsawa have become an iconic tourist spot.

In 1991, Mount Pinatubo exploded in the northern Philippines in one of the biggest volcanic eruptions of the 20th century, killing about 800 people.