All I want for Christmas is quotation marks

Too many authors shun this humble form of punctuation 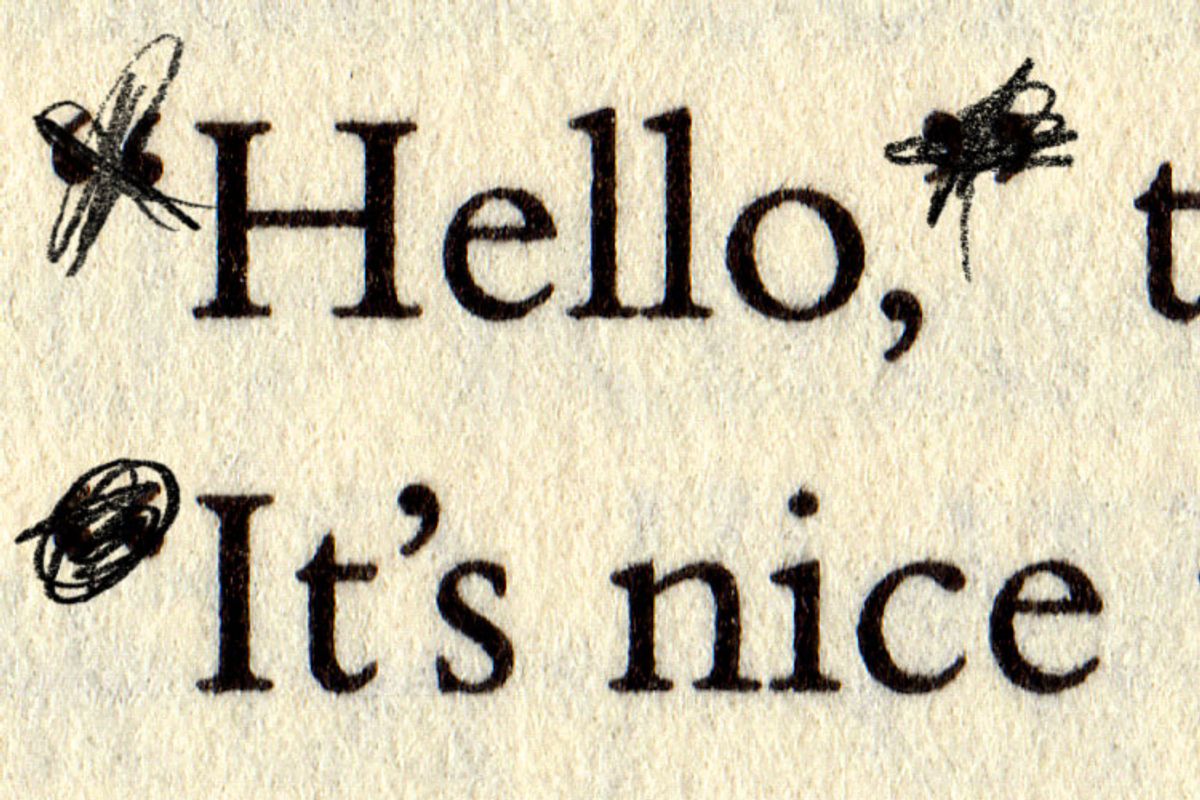 Everyone knows that the world's material resources -- food, water, oil -- are distributed unequally, but few realize that the same is true for punctuation. Take quotation marks: Some forms of writing, such as handwritten signs in the windows of delis, revel in an abundance of these, so much so that an entire blog exists only to scold them for their conspicuous consumption. Yet in other parts of the world, terrible shortages of quotation marks prevail, leaving some readers confused, disoriented and even downright insurrectionary.

I'm talking, of course, about literary fiction, where at times quotation marks can be as hard to come by as a pre-publication blurb from Don DeLillo. Although every style manual you might care to name will tell you that lines of dialogue must be enclosed in these little paired curlicues (or single ones, if you're British), many writers insist on leaving them out. Authors who have eschewed quotation marks include E.L. Doctorow, David Guterson, Charles Frazier, Nadine Gordimer, Kate Grenville, William Gaddis and (sometimes) Raymond Carver.

Why do they do this? I once heard Doctorow tell a group of journalists that if a writer knows what he's doing, quotation marks aren't really necessary. "You can tell when it's dialogue," he explained. Often enough, that's true. However, to say that an element of written language can be eliminated without rendering the language itself incomprehensible is not tantamount to saying that the element is superfluous and ought to be abandoned.

Written language is inherently redundant, as cryptographers and information theorists term it -- that is, every sentence contains multiple cues to its intended meaning. That's why the moderators of Internet discussions will sometimes "disemvowel" objectionable posts, removing all the vowels from the words without deleting the post itself. Th txt rmns ndrstndbl, fr rdrs wllng t wrk. The moderator refrains from actual censorship, while those who'd rather not subject themselves to the rantings of trolls can simply skim past the resulting pseudo-gibberish unscathed. The point is, you can still read it if you try, you just have to exert yourself.

While it's less of an impediment than disemvowelment, the elimination of quotation marks does make a work of fiction at least slightly harder to follow. You will need to read it a little more slowly, if only to figure out whether any given sentence is dialogue or narration. Defenders of the practice will insist that such techniques "force" the reader to contemplate the author's prose more carefully because apparently we need to have our arms twisted to make us do so. And it's true that the extra effort that goes into reading quotation-mark-free fiction does resonate with the widespread and rather Puritanical notion that reading you have to work at must be serious and therefore literary.

This justification doesn't, however, take into account the low quality of the labor demanded of readers by the jettisoning of quotation marks. What, exactly, does anyone gain aesthetically from the chore of sorting out lines of dialogue? If the intention is to make the thing harder to read, why not disemvowel it and really give 'em a good workout? Notwithstanding such avant-garde stunts as Georges Perec's "A Void" (written so as to avoid using the letter "e"), the proposition that you can improve the literary quality of a text by arbitrarily cutting out some expected element to reduce its readability is, when baldly stated, just plain silly.

Perhaps the most famous shunner of quotation marks is the novelist Cormac McCarthy, who told Oprah Winfrey that he preferred not to "block the page up with weird little marks. If you write properly, you shouldn't have to punctuate." (McCarthy also disdains the semicolon. And it should be added that the 18th century's most revered English stylist, Samuel Johnson, boasted of writing so cogently he never had to resort to parentheses.) There is a hauteur to such pronouncements; they amount to an assertion of the speaker's superiority. Lesser writers might have to resort to cluttering their prose with "weird little marks," but not a master such as moi.

For this reason, perhaps, most readers regard the absence of quotation marks as an affectation, meriting more or less indulgence depending on how much they like the author in question. Some will even patiently explain to you why a favorite writer does this (invariably invoking the ol' "makes you work at it" rationale). But it's hard to find anyone who truly believes a novel or short story is improved by the elimination of quotation marks -- or that it would be somehow damaged if a copy editor snuck in and inserted them just before publication. And there are certainly readers who can't endure this particular authorial quirk. I've met people who steadfastly refuse to read fiction without quotation marks around the dialogue.

I recently kvetched to a novelist friend that as much as I liked Michelle Huneven's novel "Blame," I was irritated by her omission of quote marks and wondered why she'd done it. "Well," he answered without hesitation, "given the subject matter" -- an alcoholic's determination to redeem herself after being implicated in a fatal accident -- "it was probably meant to signal that the book isn't middlebrow." With a story line that resembles an Oprah-friendly tale of personal redemption, skipping the quotation marks is a way for Huneven to assert that her novel is not too accessible, and to claim a cultural prestige that's often equated with simple difficulty.

But there's difficult and then there's difficult; a minor yet pointless inconvenience introduced into a work of fiction for no perceptible purpose other than to shore up an author's wobbly sense of his or her own status risks conveying not confidence but insecurity. More to the point, what writer of serious fiction today can possibly afford to put readers off for the sake of a little highbrow preening? (Cormac McCarthy, I guess.) Disemvowelment, after all, is a technique used to warn readers away from something they probably don't want to read anyway. Maybe literary fiction should think twice before sending the same message.