Imperfection is a start

For all its faults, the current bill establishes universal care, and there's no going back from that 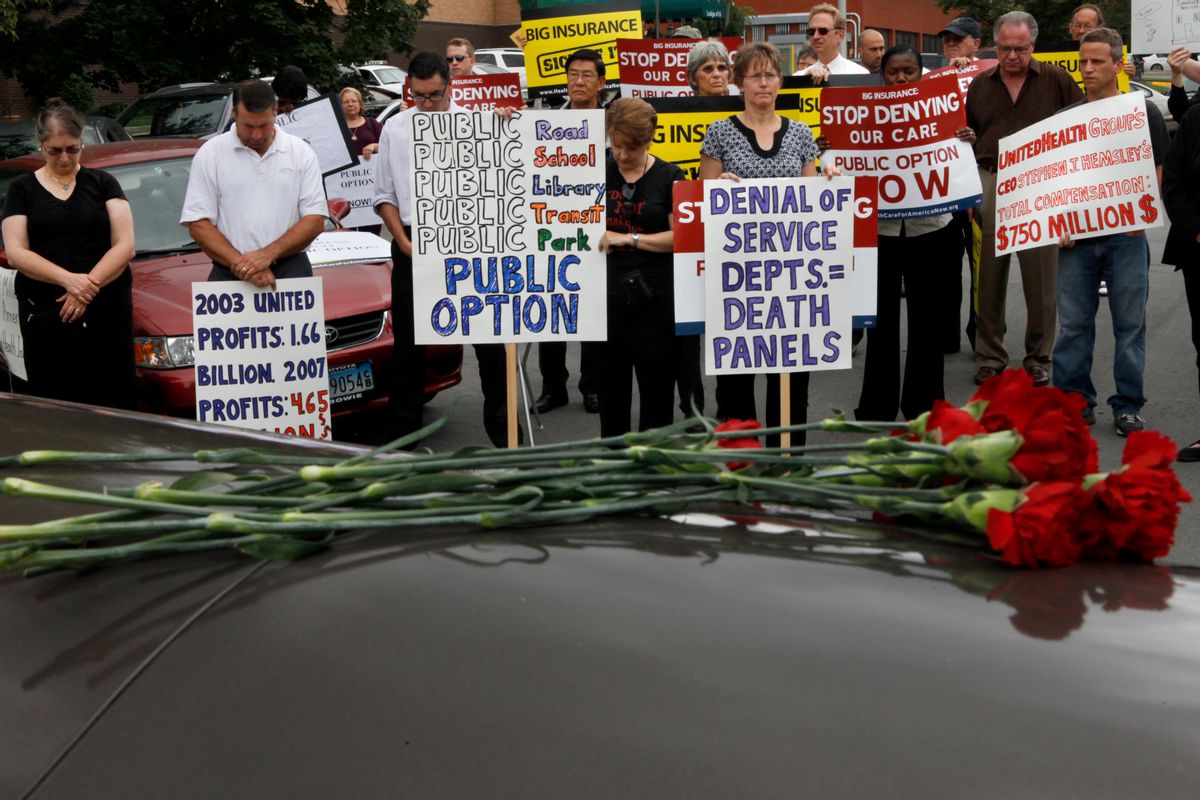 A group of around 60 people support health insurance reform during a rally in Rockville, Md. on Tuesday, Sept. 22, 2009. (AP Photo/Jacquelyn Martin) (Jacquelyn Martin)
--

Buyer's remorse seems to be setting in among Democrats, even as the U.S. Senate is poised to vote (as I write this) on the most significant piece of social reform since the 1960s.

No less a figure than Dr. Howard Dean, the former Vermont governor and Democratic National Committee chairman, wrote that, were he a senator, "I would not vote for the current healthcare bill. Any measure that expands private insurers' monopoly over healthcare and transfers millions of taxpayer dollars to private corporations is not real healthcare reform."

Dean's reservations have been widely echoed on the left. The healthcare bill's big winners, they complain, are the insurance industry, pharmaceutical companies, hospitals and doctors. Because it lacks both the "public option" (a government-run insurance company competing with private ones to drive down costs) and the Medicare buy-in that was initially highly touted, then quickly shot down by Holy Joe Lieberman, some Democrats fear that the party is both providing inadequate coverage and setting itself up for a voter backlash.

Once the public realizes that the bill mandates everybody to buy private health insurance — pretty much the way everybody has to carry auto insurance — there's sure to be unhappiness not only on the tea-party right, but also among working people who ordinarily lean Democratic. Politics Daily's David Corn saw it coming. "I feel as if I'm watching a cheesy horror flick and some poor unsuspecting person is about to open the wrong door," he wrote last September, "and you want to scream, 'Hey, don't open that door!'"

To be sure, the bill provides generous subsidies for individuals and small businesses currently unable to afford coverage. And it doesn't kick in for a couple of years, when one hopes the current recession will be a bad memory.

Even so, Salon's estimable Glenn Greenwald sees it as a sellout: "The healthcare bill," he writes, "is one of the most flagrant advancements of ... corporatism yet, as it bizarrely forces millions of people to buy extremely inadequate products from the private health insurance industry — regardless of whether they want it or, worse, whether they can afford it," even with some subsidies.

MSNBC's self-dramatizing Keith Olbermann goes further, vowing to become what the Russians used to call a "refusenik." "I hereby pledge," he announced, "that I will not buy this perversion of healthcare reform. Pass this at your peril, senators. And sign it at yours, Mr. President. I will not buy this insurance. Brand me a lawbreaker if you choose. Fine me if you will. Jail me if you must."

As diverting a spectacle as that might be, for Democrats to heed such overheated rhetoric would be catastrophically foolish. Olbermann and others spent the 2008 primaries charging that Democrats skeptical of Barack Obama had racist motives. Now that he's poised to sign the most far-reaching enhancement of the American social contract since Lyndon Johnson, President Obama has now been rendered impure in their eyes.

Here are a few truths: First, we've been living in a one-dollar, one-vote corporatized democracy for a long time. If this is news to you, then you're probably also shocked to learn that the U.S. Constitution, by awarding two senators to each of what H.L. Mencken called "the cow states" — no insult to the cows in my own barn — was deliberately crafted to make fundamental change difficult. Who made "moderates" like Blanche Lincoln of Arkansas, Ben Nelson of Nebraska and Joe Lieberman of Aetna mini-presidents? Alas, the founding fathers did.

Living in such a polity, anybody who thought entrenched interests like the insurance, pharmaceutical and hospital industries weren't going to find ways to make money off healthcare reform probably wasn't paying attention back at the beginning, when Obama said that despite the abstract appeal of a Canadian-style single-payer system, it was a political non-starter. As Greenwald points out, that told you right there that the White House was going to settle for the best corporate compromise it could get.

Sure, there's a risk of backlash. The problem is no universal or near-universal health-insurance plan — public or private — can be voluntary. Mandates are, well, mandatory to prevent opportunists from gaming the system: Buying insurance only after they get sick. Nobody can insure "previously existing conditions" if clients come and go at will.

Insurers forbidden by law from canceling policies also need a base of healthy rate payers. Public or private, it's a two-way street; costs can't be cut without a bigger risk pool.

Indeed, a gradual counter-backlash seems likelier, as all but the most perfervid tea partiers gradually recognize that their families are more secure, and that none of the GOP scare stories — "death panels," rationing, etc. — have any basis in reality. Retreat now is unthinkable. Imperfections notwithstanding, once universal coverage is established in principle, there'll be no going back.