"It's Complicated": Another missive from romantic-comedy hell 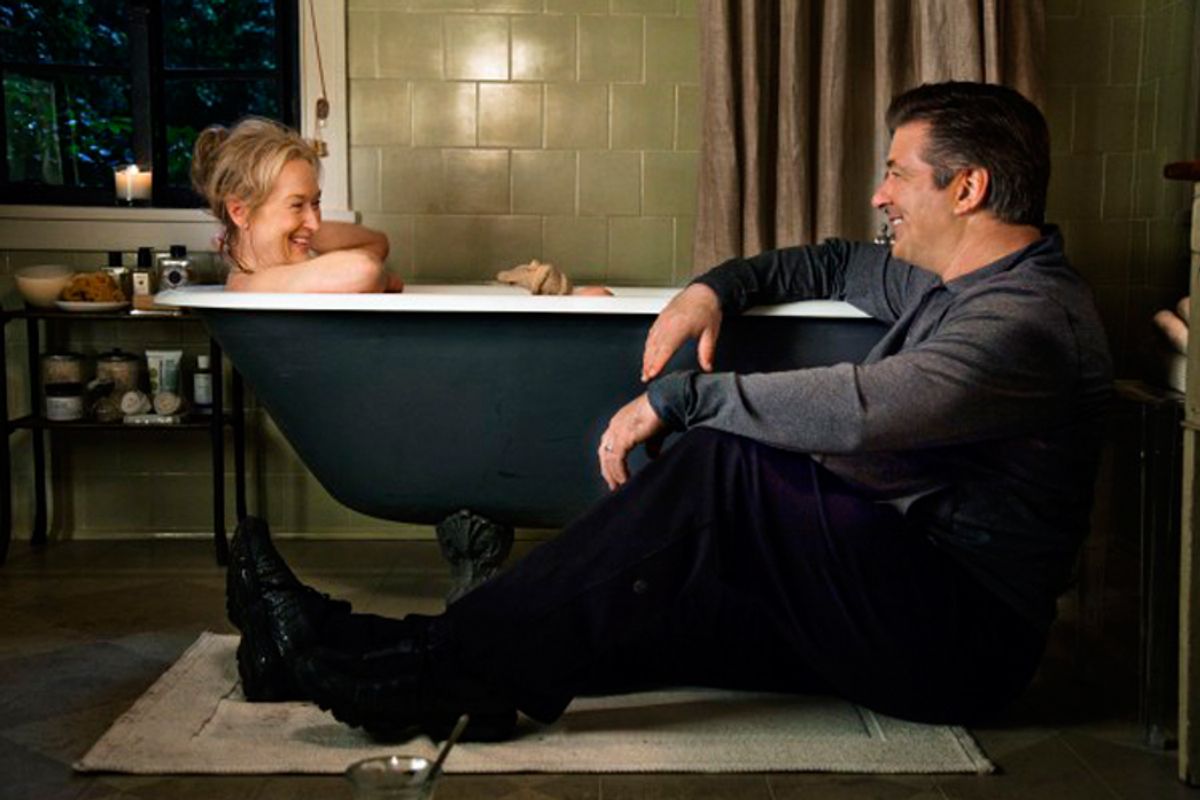 Meryl Streep and Alec Baldwin in "It's Complicated"
--

That sound you hear now and then in the post-middle-age romantic comedy "It's Complicated" — something like the creaky cracking of a large frozen land mass whose surface has begun to melt just the tiniest bit — is the sound of Nancy Meyers having a sudden realization: Men are people, too. At least sometimes, if they happen to catch you in the right mood, maybe if they've just given you a good time in bed. The rest of the time, they're the Enemy, particularly if you're over 40 and still smarting over the cruel revelation that younger women exist. And that some (though not all) older men want them, perhaps more than they want you. Time to put on your mail-order art-to-wear kimono, pour another glass of chardonnay, and get together with your equally bitter girlfriends, all of whom have much to say about how much they hate everything with a penis, although once in a while — logic be damned — it would be kind of nice to touch one again.

I'm trading in stereotypes, of course. But compared to Nancy Meyers, I fear my characterization has the delicacy of Chekhov. "It's Complicated" gives us Meryl Streep as Jane, a successful 60-ish cafe owner and mother who, some 10 years earlier, was dumped by her husband, Jake (Alec Baldwin), for a willowy swimsuit-model-type named Agness (played by Lake Bell). The divorce was rough, but in recent years, Jane has been doing just fine. Her children are grown. (They're played by Zoe Kazan, Hunter Parrish and Caitlin Fitzgerald, with "The Office's" John Krasinksi hovering on the sidelines as the way-too-nice future son-in-law.) Her business is thriving. And she's just about to put an addition onto her already Architecture Digest-caliber house, maybe because, in Hollywood terms, that's what real women do to prove they've fully gotten over being dumped for a younger woman.

And then Jake and Jane, while attending their son's graduation festivities, get drunk together, share a few laughs and fall into bed. Jake begins to realize how much he's missed his ex-wife; Jane starts wondering if perhaps she gave up on the marriage too soon. The two begin a clandestine affair that challenges how they think about each other as fellow grown-ups, and how they think about themselves.

Or at least, that's the idea "It's Complicated" gets at in its best moments. (I'll have to get to Steve Martin's character, as the emasculated nice-guy architect Adam, later.) Every few years Meyers graces us with another missive from romantic-comedy hell, and often (though not always) these movies end up being huge hits: In the 2000 film "What Women Want," we were invited to howl with laughter at the sight of Mel Gibson suffering the indignity of having to wear pantyhose. In the 2003 effort "Something's Gotta Give," wrinkly poonhound Jack Nicholson got thrown for a loop by a very sexy Diane Keaton (who gave a marvelous performance that saved the movie). Meyers' last picture, "The Holiday" (2006), was based on a potentially pleasing premise — lonely singles Kate Winslet and Cameron Diaz swap homes for the holidays and in the process find nice boyfriends — but didn't shoot through the box-office roof as Meyers' previous pictures had.

Meyers writes these comedies not so much in the English language as in a broad semaphore that's based largely on the idea of women as lonely, put-upon creatures who suffer because men can never, ever understand them. Long gone are the days of Preston Sturges, Howard Hawks, Ernst Lubitsch or even the early (and wonderful) Woody Allen. Those directors, although they were men, didn't make comedies from a strictly male point of view (whatever that might be). In their movies, the sexes were doomed to misunderstand and misread one another; if they got together, it was by luck and a streak of go-for-broke insanity. Both parties, male and female, risked rejection and heartache.

But times have changed, and so have the terms of romantic-comedy filmmaking. Meyers is relatively rare in that she's a woman who specializes in the genre, which supposedly makes her specially keyed in to a woman's point of view. And watching "It's Complicated" I felt, for the first time, that Meyers was willing to go just a little bit beyond her usual two-dimensional male-bashing — that for once, she was recognizing that marriages, and the families they create (whether that's a family of just husband and wife or one that includes children) are more enduring and valuable things than we care to admit, particularly after a marriage disintegrates.

Perhaps I'm just projecting my own longing for thematic subtlety onto Meyers' generally ham-fisted methods, but I don't think so: There are moments in "It's Complicated" — tied, particularly, to Baldwin's performance and to some of the writing Meyers has done for him — where I think Meyers is grappling with some very real and very complicated feelings, instead of just delivering her usual cheap vision What (She Thinks) the Audience Wants.

She does have some skilled actors to work with here. Streep is always wonderful in comedy, and if she's maybe a little too gung-ho about channeling Meyers' pulsing "poor little old me" vibe, she does at times elevate the material. It doesn't hurt that Streep is simply beautiful to look at. She and Baldwin are like movie-star versions of real people — prettier, most likely, than you and me, but still safely in the realm of the believable, with realistically imperfect skin and bodies that suggest an enjoyment of food or the experience of having borne children. Streep's timing is pinpoint perfect, even when the dialogue she's been given is offensive or stupid. And in places, Meyers has actually given her good dialogue to work with: In one scene, after Jane and Jake have tentatively reconnected, she lounges in the bath — on this particular occasion she's refused to have sex with him, despite his pleading — while he sits with his back against the tub, rambling about nothing much at all. She's sensed he isn't happy, for obvious reasons, and she asks him plainly what's going on at home — not as a way of belittling him, but in the way any of us might reach out to someone we truly cared about.

But elsewhere Streep is saddled with the usual Meyers crap: In the movie's opening scene, she looks on with superiority as Lake Bell's character struts around in a midriff-baring outfit. In later scenes, Jane gets together with her girlfriends (played by Mary Kay Place, Rita Wilson and Alexandra Wentworth) to bitch about how unworthy men are to spend time in the company of goddesses like them, though goddesses like these make Macbeth's three witches look like real keepers. Jane's self-pity is written right into her character's DNA, and it has a screechy self-righteousness. Her unhappiness is everyone else's fault. Near the end of the picture, after she and Jake have come to a decision about their possible future, he says, "I'm sorry," and she asks how far back that "I'm sorry" goes. When he lays his soul bare, she can't resist stabbing it with her ever-present hot poker.

There is one really nice guy in "It's Complicated," one who hasn't cheated or hasn't — yet — made any woman feel bad about herself, and he's played by Steve Martin. The casting is unfortunate: I think Martin's Adam is supposed to be handsome and sweet, but Martin's skin is stretched so tight that he resembles a creepy snowman with two black coals for eyes. Maybe the old Steve Martin is somewhere inside there, but who wants to chip away the plaster to find out?

And now I'm about to lay one last horrible piece of news on those of you who may have at one point seen a Nancy Meyers' movie and sworn, "Never again." Alec Baldwin is off-the-charts superb. That's probably no surprise to anyone who's been watching him on "30 Rock" these past few seasons. In places he seems to be sending up the whole movie with his sexy, ever-so-slightly sleazy demeanor, though in the end, he's the movie's most believably human, and most sympathetic, character. At one point, after he and Jane have had sex, he rises from the bed to put his clothes on, standing before her in tight black shorts, his belly hanging unapologetically over the waistband. He pats this Buddha-like girth, drawing attention to it instead of hastening to cover it up, and in that moment he's sexier than Johnny Depp, Robert Downey Jr. and James Franco all rolled into one.

I can already hear the chorus: Older men can afford to be more comfortable with their bodies! Society doesn't judge them as it judges women! And there is some truth to that refrain, as there is to most refrains. Streep's Jane is understandably nervous about showing Jake her older, softer body — she explains, shyly, that the last time he saw it, she was still in her 40s. That's not a self-pitying remark, simply an honest one.

But Jane doesn't get as naked, literally or figuratively, as Jake does in "It's Complicated." In Nancy Meyers' world, the man — especially the cheating husband — will always be the Other, the villain who's worthy only of women's scorn, not their understanding. That said, I'm grateful to Meyers for giving us the sight of Baldwin in his underwear, for acknowledging even in some small way that guys have insecurities too, even if they don't air them as vocally as women do. It's a drag that "It's Complicated" isn't nearly complicated enough, but at least Meyers has dropped something a bit more subtle than her usual anvil. This one is more like a mere tire iron, but at least we've got Baldwin: He's the pixie dust that chases away the ensuing headache.