Directors of the decade: No. 5: Steven Spielberg

Love him or hate him, no American director has been so popular for so long and inspired so much debate 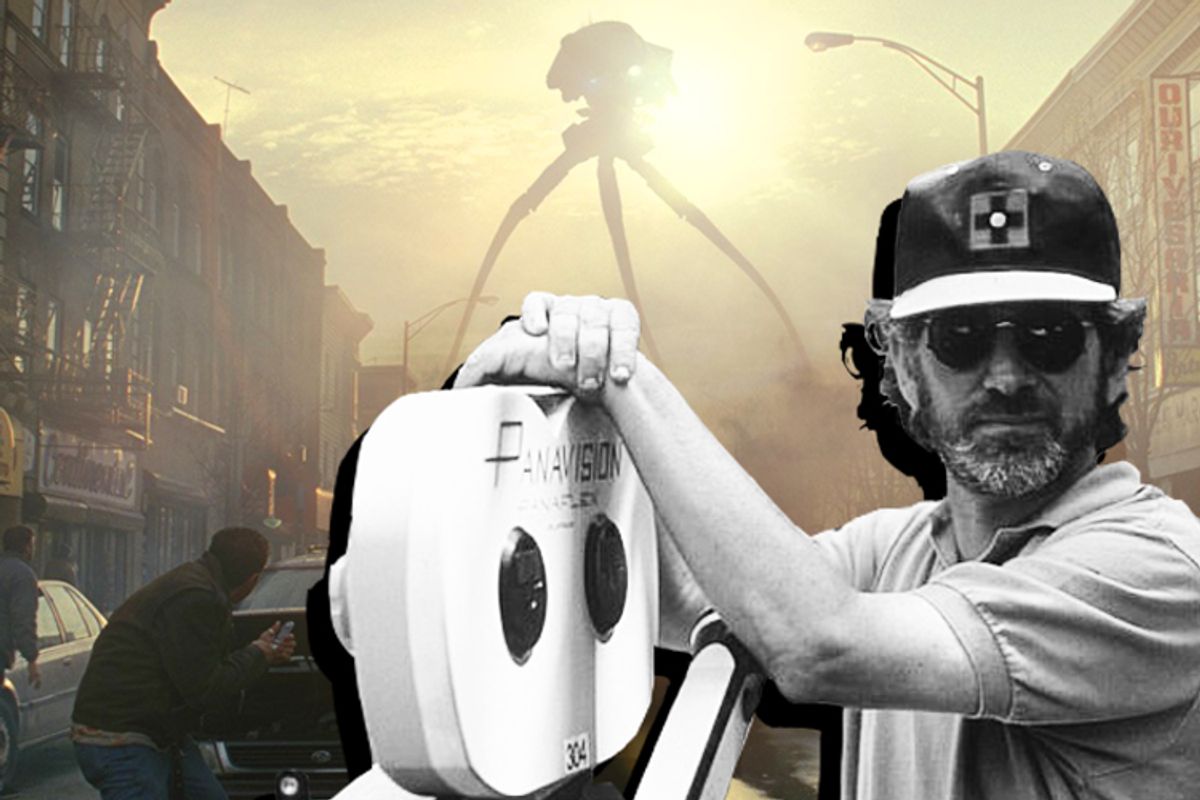 Alfred Hitchcock plus Walt Disney equals Steven Spielberg. That equation — offered by a friend of mine who's an admirer of all three — is a decent starting place to describe the director of some of the most popular films ever made. Spielberg has Disney's business sense and uncanny knack for conjuring childlike awe and delight, plus Hitchcock's fondness for pushing visceral buttons and somehow making the experience more delightful than assaultive. But the equation doesn't adequately describe Spielberg's technical sophistication, narrative chops and uncanny popular touch, or his versatility; "A.I. Artificial Intelligence," "Minority Report," "Catch Me If You Can," "War of the Worlds," "Munich" and "Indiana Jones and the Kingdom of the Crystal Skull" are as arresting and imaginative (though not as widely satisfying, especially the last one) as his run of work in ... well, I started to write "the 1970s," until I remembered that Spielberg wasn't exactly coasting in the '80s or '90s, either.

Throw in Otto Preminger and Stanley Kramer (the premier "issue" filmmakers of an earlier era), a dash of John Frankenheimer (whom Spielberg once credited with influencing his editing style more than any other filmmaker) and splashes of David Lean, Frank Capra and Akira Kurosawa (three of Spielberg's acknowledged visual and dramatic touchstones) and you still haven't described his creative multitudes, much less factored in his apparent indestructibility. Spielberg has been cranking out first-rank blockbuster entertainments and visually imaginative adult dramas (sometimes operating in both modes simultaneously) since his 1971 breakthrough, the relentlessly exciting (and top-rated) TV movie "Duel." (If you haven't seen it, do; the title vehicle is "The Terminator" on wheels.) Except for a fleeting period in the late 1980s and early '90s when his pitching arm seemed to give out (really just two films, "Always" and "Hook") his vitality and popularity never ebbed.

No director has been as popular with viewers over a longer period and inspired such intense, seemingly endless arguments among critics about whether he's an artist or just a extraordinarily proficient middlebrow showman. (American critical consensus didn't begin considering Hitchcock a serious artist until François Truffaut published a reverential, book-length conversation with him in the late '60s.) Between Spielberg's aspiration to be all things to all viewers (evidenced by his truly regrettable tendency to tack happy endings and/or bracketing sequences on stories that don't need them), his ability to switch between lighthearted mayhem and morally serious violence without seeming like a hypocrite, and his Stanley Kubrick-like embrace of the shiniest filmmaking technology (only Robert Zemeckis is more of a gearhead), he's the least stodgy institution in American cinema.

He could have coasted on his past reputation this decade, directing very slight variations on proven formulas. But the only Spielberg film of the decade that fits this description is the fourth Indiana Jones film, which alienated many fans of the franchise by embracing the CGI-generated absurdities beloved by his co-producer, George Lucas, and subtly elbowing the hero toward the margins of the film bearing his name. Between Indy's old-guy crankiness, his squabbling ensemble of fellow adventurers, and the script's late-in-the-game revealing of Karen Allen, the costar of "Raiders of the Lost Ark," the film was more an ensemble piece than a go-it-alone action picture; the man with the whip didn't so much drive the plot forward as go along for the ride. But there was a point to this approach: "Crystal Skull" was Spielberg's immense and spectacular version of an Old Man movie. It was chatty and poky, rather like the films Howard Hawks and John Ford were making in the mid- to late '60s — films that felt more like amiable contemplations of mortality than adrenaline-delivery devices. To quote one of Indy's colleagues, he's at the point where life stops giving and starts taking away. The stunning image of Indy silhouetted against a mushroom cloud finds its rhetorical mirror in the climactic shot of the alien craft blasting out of the ground; both shots suggest awe in the face of cosmic forces that are difficult to understand and impossible to control.

The rest of his output was simply stunning — as formally playful and thematically serious as films can get without losing total accessibility. I'm reluctant to fully embrace "A.I.," a project originated by Kubrick, as a Spielberg film, because as critic Jonathan Rosenbaum recently noted in an appreciation for Salon, it feels less like the exclusive intellectual property of either director than a conversation between them. But what a conversation! Kubrick asked Spielberg to direct "A.I." because he didn't think he had the temperament to convey the android hero David's innocence, much less create the cathartic rush of emotion the story required. Spielberg wasn't just well suited to that one part of the job; he seemed to discover new facets of his talent by having to subordinate (but not hide) his optimistic tendencies. When the film came out in summer of 2001, audiences rebelled against the film's final section, the sequence in which David is excavated from the ice by superior beings. They thought the final image of David with his "mother" — actually a synthetic creature brought to life by cloning a strand of hair — was the sappiest ending the director had ever staged. Talk about missing the point. The ending is as mercilessly dark as anything Kubrick ever directed himself; a robot boy who wants to be real and is told he never can be real achieves a measure of realness because he feels, and his dogged emotional purity is rewarded by a fleeting encounter not with his mother, but with an idealized version of his mother, the mom he always wanted his adoptive parent (his owner, really) to be. The motto could be "be careful what you wish for," and the fact that David seems perfectly happy with the result is the most piercing touch of all.

Between these bookends, Spielberg gave us the nearly irresistible impostor film "Catch Me If You Can" and "Minority Report," a great dark comedy about the social and moral implications of a culture of surveillance. The latter is a great film about what voyeurism does to people and societies (and by extension to you, the viewer). Between the shots of detective hero John Anderton moving frames around in midair (the director as God) to his encounter with a homeless man who's torn out his own eyes to the overhead tracking shot of retina-scanning robot spiders raping the eyeballs of everyone in an apartment building and the slapstick image of Anderton chasing his own bouncing eyeballs down a hallway, "Minority Report" works both as a dystopian fantasy and as a self-probing, even self-cautioning work by its director. Like "Vertigo," "Minority Report" often plays like a film that was partly made to remind the filmmaker against the seductive lure of total control.

"War of the Worlds" and "Munich" are equally impressive. The former is an immersive nightmare movie operating in the same vein as "Mulholland Drive" and "Inland Empire" (though with an unremarkable middle-class family at its center to anchor the more disturbing images). It keeps changing shape as you watch, which makes it not just an engrossing horror spectacle but a useful cinematic metaphor for how viewers processed 9/11 and the war on terror. Spielberg's determination to be on everybody's side serves him well here: "War of the Worlds" is a film that starts out as an allegory of What Happened to Us on 9/11 ("Is it the terrorists?" the hero's daughter shrieks as Jersey City explodes) and ends up an allegory of occupation, with the Martian tripods trundling from city to city like armored columns in Iraq. (As Tim Robbins' crazy basement dweller notes, occupations always fail.)

"Munich" dealt with similar themes more straightforwardly, but with just as much integrity; the Munich massacre stands in for 9/11, the Israeli response for the foreign policy misadventures that came afterward, and by the end, what started out as an idealistic and just mission becomes an exercise in futility, with the heroes resigning themselves to not knowing who they're killing, why they're killing them, or why it's supposed to make a difference. This isn't middlebrow filmmaking: It's termite art in elephant's clothing.