The best "Christmas Carol" ever 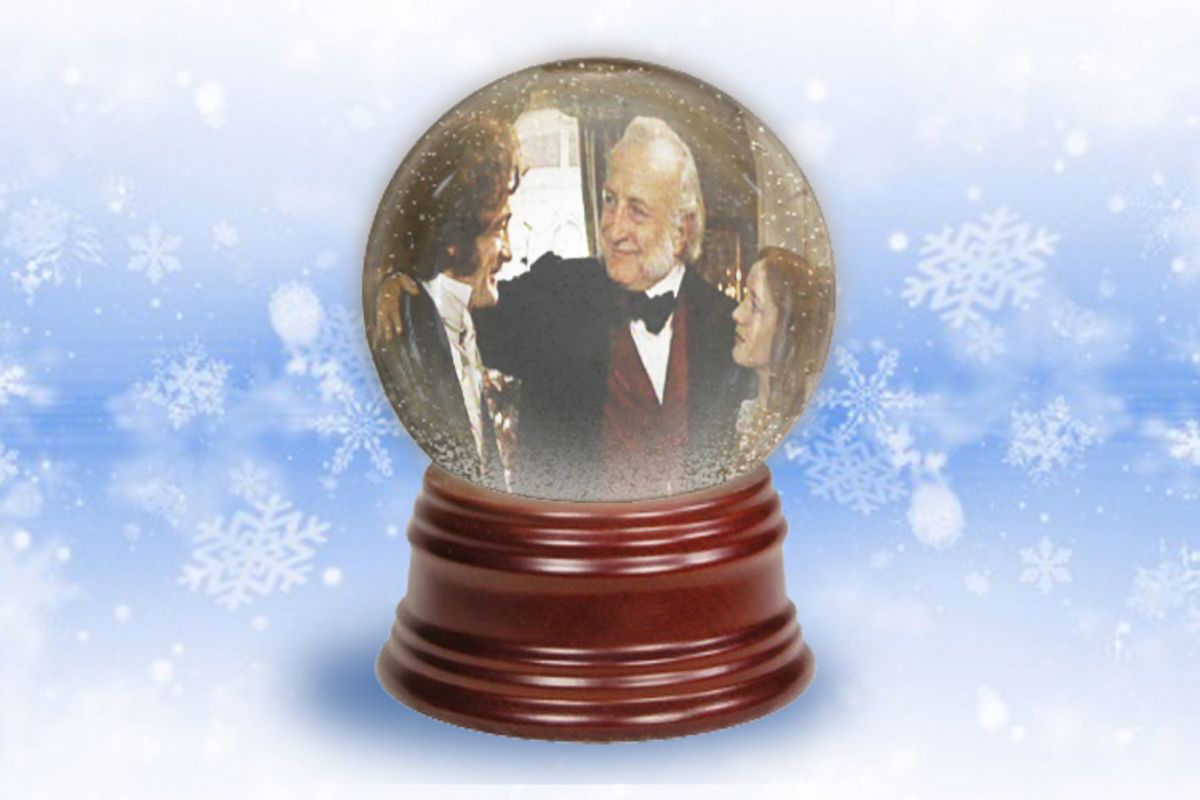 Let's see. America is pulling out of a recession. The military-industrial complex is humming along. Healthcare is far from being reformed. We might as well pretend it's 1984.

And in that case, let's pause and pay due homage to a movie that many of us either missed or overlooked the first time around. A television movie, of all things, that through some convergence of inspired casting, rich production values, and deep but unfussy textual fidelity became the definitive version of a beloved literary classic.

Only we're just now figuring that out.

When you ask ardent Dickensians to name the best version of "A Christmas Carol," they will invariably close ranks around the 1951 Alastair Sim adaptation. I was one of those partisans myself. I turned up my nose at Reginald Owen and Albert Finney, I scoffed at Michael Caine and Patrick Stewart, I rolled my eyes at the mere mention of Bill Murray and Kelsey Grammer, I resisted even the myopic charms of Mr. Magoo. It was Sim or nobody.

It helped, of course, that Sim's was the version I had grown up with and the version that, with its chiaroscuro stylings, seemed closest to the dark spirit of Dickens' rather unsentimental original (and John Leech's original drawings). Best of all, it had Sim himself, whose magnificently expressive face could, as needed, explode toward heaven or sag to the very pits of hell. (Surely, Dr. Seuss took a good hard look at the Scottish actor's puss before sketching the Grinch.) For many Dickens lovers, it's impossible to hear a line like "There's more of gravy than of grave about you" or "You were always a good man of business, Jacob," without hearing Sim's inflections, delivered in a voice that reminded one colleague of "a fastidious ghoul."

Yes, I was a Simmian down to my sinews, until I sat down last year to watch the film in the company of my 8-year-old son — and experienced a rude shock. There was no question that Sim's work held up, but — how do I say this? — for the first time in the film's nearly 60-year existence, I felt I was watching an old movie.

The print was muddy. The supporting cast abounded in the Old Vickery that characterized so much postwar British acting: that rather plummy relish in the thespian's craft that, in the case of Kathleen Harrison's housekeeper or Miles Malleson's Old Joe, becomes too much of a not-always-good thing. Scene after scene, from the Cratchits' Christmas dinner to the flashbacks of Scrooge's youth to the scroungers trolling through Scrooge's clothes, seemed troweled on just a bit too hard, as if the filmmakers were afraid we'd miss the point. (As if we could miss the point.)

But what troubled me the most, I think, was that my son, a movie lover, was left unmoved by the whole enterprise. That hit me where I lived. As a writer who drew enough inspiration from Dickens' story to write a novel in homage, I've always believed that "A Christmas Carol" must, above all, entertain. If the vehicle is reduced to no more than its message, we might as well boil it in pudding and bury it with a sprig of holly through its heart.

So it became a point of honor to find a version of Dickens' classic that would resonate for my son and his generation, just as Sim's film had once done for me. I won't say I searched high and low, exactly, but there's a lot of both high and low in the Scrooge canon. At least a dozen stage productions of "A Christmas Carol" sprang to life within a year of the book's 1843 release. The first film version was a 1901 British silent called "Scrooge; or, Marley's Ghost." Eight additional films appeared between 1910 and 1928, starring once-esteemed theatrical actors like H.V. Esmond and Russell Thorndike and Seymour Hicks. Hicks, in particular, made something of a career of Scrooge, trotting him out more than 2,000 times on the stage, then convoying him to the silent screen in 1913, then dragging him back 22 years later for a talkie version.

It's easy to see Scrooge's allure as a part. Given the chance to be both villain and hero in the space of 90 minutes and to leave an audience gulping on its own humanity, most actors will slay every grandmother they ever had. Which is to say that on television, radio and stage, Scrooge has been essayed by the likes of Lionel Barrymore, Ralph Richardson, Fredric March and Basil Rathbone. More recently, Shakespearean veterans like Derek Jacobi and Simon Callow and Michael Hordern have had their crack at him, and with producers now spinning out endless gender- and race-based variations, James Earl Jones, Cicely Tyson, Vanessa Williams and Susan Lucci have stepped nervously into the old template. Did I mention Vic Damone and Buddy Hackett?

In short, "A Christmas Carol" has spawned a thick tangle of camp and classicism. And who would have guessed — and who could not be pleased — that the actor to emerge most gloriously from the morass would be a West Virginia native and Marine Corps veteran best known for playing homicidal U.S. generals?

An actor, moreover, who came to Scrooge at a peculiarly vexed moment in his own career. In the late '60s and early '70s, George C. Scott rode films like "Petulia" and "Patton" and "The Hospital" to a position of lonely and bitter pre-eminence. He was, like Brando, a force of nature disguised as an actor. And like Brando, he had a genuine and visceral loathing for his own gift. To make matters worse, he had a fondness for alcohol, a knack for antagonizing directors and fellow cast members, and a volcanic persona that made him nearly impossible to cast.

And so, after his glory years, Scott's filmography descended with alarming speed into the bizarre ("The Day of the Dolphin," "The Savage Is Loose"), the hokey ("The Formula," "Firestarter") and the occasional bit of indentured servitude ("The Hindenburg"). By 1984, his greatest triumphs were more than a decade behind him, and even his truest and bluest fans could scarcely imagine him salvaging his career by climbing into Ebenezer's old nightshirt. Certainly not at the behest of a hack director like Clive Donner, whose recent oeuvre had included the likes of "The Nude Bomb" and "Charlie Chan and the Curse of the Dragon Queen."

I actually remember groaning when I read that long-ago TV Guide listing: George C. Scott IS Ebenezer Scrooge, or some such nonsense. I knew, or at least I thought I knew, exactly what I was in for. "A very special television event," in which Scott would swallow every scrap of scenery within reach and would himself be swallowed by oblivion.

But something else happened. At some point in preproduction, Scott and Donner and adapter Roger O. Hirson decided they were going to make not "A Christmas Carol" but "The Christmas Carol."

Whereupon fact gives way to speculation. Did the filmmakers go straight back to Dickens? To the book that so many people think they've read without actually having read it? Did they realize how shadow-laden it really was? Did they set out to show us that what we "knew" about Ebenezer Scrooge was wrong?

Well, here's what we can say about the makers of the 1984 "Carol." They trusted Dickens' language to carry the story. They drummed up enough financing to create a persuasive depiction of early-Victorian London, right down to the bonnets and fenders. And they chose an uncommonly fine supporting cast. Edward Woodward, soon to be a transatlantic star courtesy of the network drama "The Equalizer," makes possibly the sexiest-ever Ghost of Christmas Present. Roger Rees, fresh from Dickens duty in the miniseries of "Nicholas Nickleby," brings winningly shy accents to the historically bland role of Scrooge's nephew Fred. And David Warner, too often cast as a slot-eyed villain (like the manservant-thug in "Titanic"), transforms Bob Cratchit into a true proletarian, a man who doesn't so much espouse goodness as depend on it.

Thanks to the work of these players, we grasp something of what Dickens was trying to get across, that virtue is eternally at war, that it can give way at every point. As a result, scenes that were once soppy-saggy with tears turn strangely bracing. In the hands of Susannah York, for instance, Mrs. Cratchit's lament for Tiny Tim becomes a plain, true, helpless expression of grief, all the more moving for its restraint.

Well, Cratchits and ghosts come and go, one might argue, but every "Christmas Carol" must rise or fall with its Scrooge. And on this point the 1984 version most emphatically ascends.

We can talk, if we must, about George C. Scott's technique. Start with the accent: not an immaculately Streepian production but an internalized Englishness that commands from the first note. There's the lovely underplaying of Scrooge's villainy, which has lured many an actor into the slough of hamminess. The charm of the closing scenes, in which Scrooge's newfound joy seems to be stealing up from behind him and grabbing him by his collar.

But in my mind, this particular Scrooge rises to greatness in the graveyard scene, where the sight of his name on a gravestone prompts the famous cri de coeur: "I am not the man I was! I will not be the man I must have been! ... I will live in the Past, the Present, and the Future. The Spirits of all Three shall strive within me … Oh, tell me I may sponge away the writing on this stone!"

Here it is: the dreaded "moral," in which all of Dickens' didactic chickens come home to roost. But in the hands of the classically trained Scott, it is the wail of a wasted soul. And not just a soul. With due respect to the motion-capture technology of Jim Carrey's 3-D theme ride, what makes this scene so riveting is that we're watching a real face — a face like a ruined abbey — and a lived-in body and a burnt-out voice. A human being with a history of passion.

Scott, unlike Alastair Sim, was a tragedian at heart. And perhaps it's not too much to suggest that, at some half-conscious level, he used Scrooge's dilemma to relive the tragedy of his own life: the missed opportunities, the squandered potential. Hadn't he once supped at the table of the gods? Hadn't he once had the force and imagination to play King Lear, Prospero, James Tyrone, Willy Loman? Where had it all gone? And how?

Charles Dickens wrote "A Christmas Carol" quickly — in six weeks, in a fever of inspiration. He said afterward that he felt the Cratchits "ever tugging at his sleeve, as if impatient for him to get back to his desk and continue the story of their lives.' And it is because the Cratchits and the other characters were so real to him that they remain so real to us. "A Christmas Carol" succeeds not because of its message (which Dickens recycled to markedly less effect in his later Christmas tales) but because, through all its supernatural agentry, we feel ourselves in the presence of flesh and blood. And that is just what George C. Scott, in his last great performance, gives us. An Ebenezer Scrooge with hands, organs, dimension, senses, affections. A Scrooge who, when you prick him, bleeds.