Official: Northwest passenger had "some kind of incendiary device he tried to ignite" 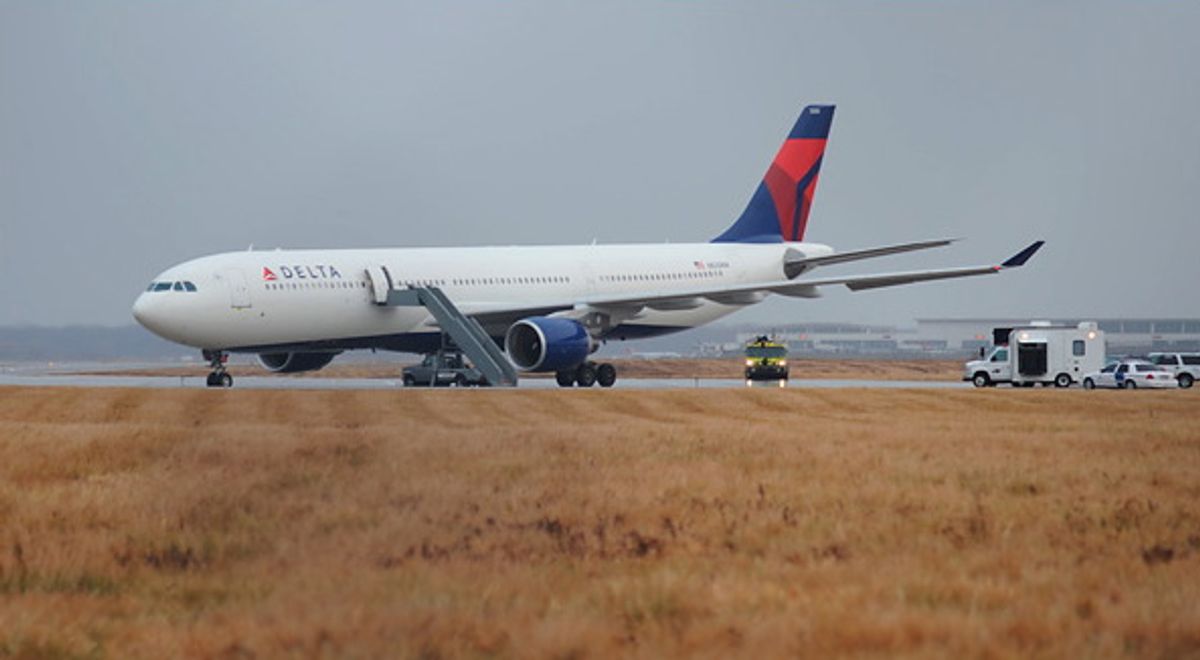 Northwest Airlines Flight 253 on the runway after arriving at Detroit Metropolitan Airport from Amsterdam on Friday.
--

A Northwest Airlines passenger landing in Detroit on Friday tried to blow up the flight but the explosive device failed, two U.S. national security officials said.

The passenger, who was traveling on Northwest Airlines Flight 253 from Amsterdam, was not identified. He was being questioned Friday evening, according to one of the officials, both of whom spoke on condition of anonymity because the investigation was continuing.

The motive of the Christmas Day attack was not immediately clear.

"He appears to have had some kind of incendiary device he tried to ignite," said one of the U.S. officials.

Authorities initially believed the passenger had set off firecrackers that caused some minor injuries.

Delta Air Lines spokeswoman Susan Elliott said the passenger was subdued immediately. She had no details on the injuries. Delta and Northwest have merged.

One passenger from the flight was taken to the University of Michigan Medical Center in Ann Arbor, hospital spokeswoman Tracy Justice said. She didn't know the person's condition, or whether the person was a man or woman. She referred all inquiries to the FBI.

An FBI spokeswoman in Detroit said the incident is being investigated. It came just as the flight, an Airbus 330 carrying 278 passengers, was arriving in Detroit from Amsterdam.

Passenger Syed Jafri, a U.S. citizen who had flown from the United Arab Emirates, said the incident occurred during the plane's descent. Jafri said he was seated three rows behind the passenger and said he saw a glow, and noticed a smoke smell. Then, he said, "a young man behind me jumped on him."

"Next thing you know, there was a lot of panic," he said.

Rich Griffith, a passenger from Pontiac, said he was seated too far in the back to see what had happened. But he said he didn't mind being detained on the plane for several hours. "It's frustrating if you don't want to keep your country safe," he said. "We can't have what's going on everywhere else happening here."

President Barack Obama was notified of the incident and discussed it with security officials, the White House said. It said he is monitoring the situation and receiving regular updates from his vacation spot in Hawaii.

J.P. Karas, 55, of Wyandotte, Mich., said he was driving down a road near the airport and saw a Delta jet at the end of the runway, surrounded by police cars, an ambulance, a bus and some TV trucks.

"I don't ever recall seeing a plane on that runway ever before and I pass by there frequently," he said.

Karas said it was difficult to tell what was going on, but it looked like the front wheel was off the runway.

The Homeland Security Department said passengers may see additional screening measures on domestic and international flights because of the incident.

"We encourage those with future travel plans to stay in touch with their airline and to visit http://www.tsa.gov for updates," the department said.

Homeland Security Secretary Janet Napolitano has been briefed on the incident and is closely monitoring the situation.

The department encouraged travelers to be observant and aware of their surroundings and report any suspicious behavior to law enforcement officials.

Jakes reported from Baghdad, Iraq. Randi Berris in West Bloomfield, Mich., and Shelley Adler in Washington contributed to this report.