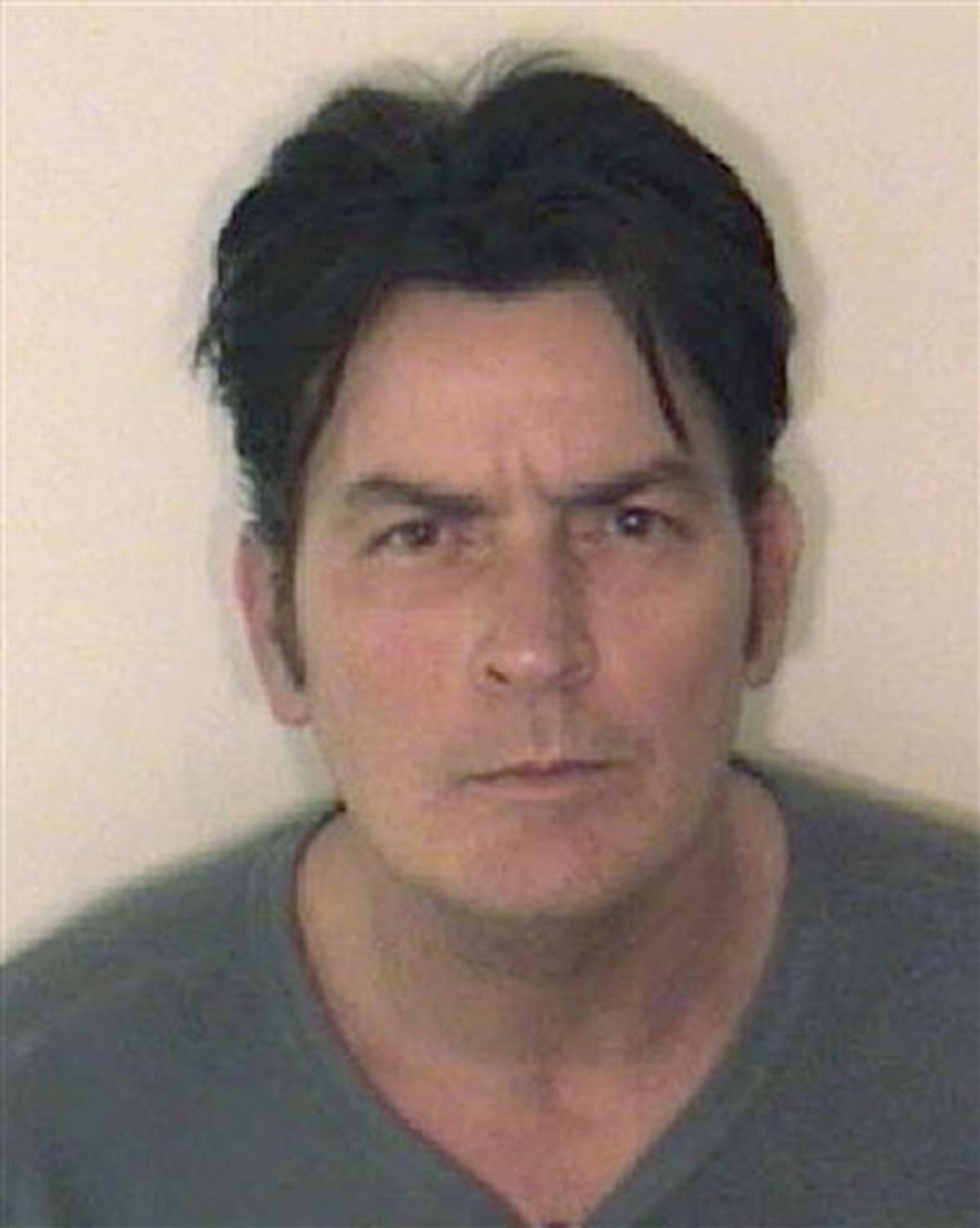 This picture provided by the Aspen Police Department on Friday, Dec. 25, 2009 shows Charlie Sheen. Sheen has been arrested in Aspen, Colo. on charges related to an alleged case of domestic violence. Authorities said Sheen was arrested Friday on charges of second-degree assault as well as menacing, both felonies, and criminal mischief, a misdemeanor. Police said the alleged victim didn't have to be taken to the hospital but didn't identify who the victim was. (AP Photo/Aspen Police Department) (AP)
--

In case you needed any reminding that the holidays can be alarmingly awful, look no further than the bookended tales of this festive season — both involving highly successful men, their wives and early-morning altercations.

We all know by now how Tiger Woods spent the wee hours of his day after Thanksgiving — an alleged dispute with his wife over the rapidly detonating bombshells of his infidelities, a drive into a tree, injuries — and that's just for starters.

Now consider the tale of Charlie Sheen — truther fruitbat and television's most highly compensated actor, who was arrested in Aspen, Colo., on Christmas following an 8:34 a.m. call to 911. After being booked for second-degree assault, menacing and criminal mischief, Sheen spent a night in jail, posted $8,500 bail, and is now set to return to Colorado next month to face charges. His wife, Brooke Mueller, with whom he has 9-month-old twin sons, meanwhile allegedly claimed Sheen threatened her with a knife — and then recanted her story after telling police she'd been drunk she when made the call. According to TMZ, Mueller tested at a blood alcohol level of 0.13, lending credence to her assertion of inebriation and giving Mr. and Mrs. Sheen a Christmas morning straight out of Norman Mailer.

And on the other side of the world this yuletide, Finnish ski jumping champion and Olympic medalist Matti Nykanen was arrested after allegedly spending his Christmas attempting to stab and strangle his wife. Nykanen was also arrested in 2004 for stabbing a companion in a bar fight.

The incident is far from Sheen's first domestic dispute. The hooker aficionado was arrested in 1996 for attacking then-girlfriend Brittany Ashfield and served two years' probation for the offense. More recently, his ex-wife Denise Richards detailed a laundry list of abusive behavior in her 2006 divorce papers, culminating in a showdown in which she says Sheen shoved her in front of her daughter and threatened to kill her — an incident which, notably, occurred on Dec. 30.

What is it about the ostensibly most wonderful time of the year that makes it so fraught with potential violence?

On PsychCentral earlier this month, Dr. David Schneider, chair of family and community medicine at St. Louis University, noted a toxic combination of factors that can push families over the edge. "There’s a lot of stress associated with the holidays, from pressure to provide for the family and money issues to spending more time with distant family," he said. "Domestic violence often revolves around high-stress times. Additionally, people tend to drink more alcohol around the holidays, and about half of all domestic violence occurs when either the perpetrator or victim is under the influence of alcohol."

And as Janet Scott-Mace, associate executive director at the Women's Center and Shelter of Greater Pittsburgh explained to the Pittsburgh Tribune-Review after a harrowing Christmas-morning standoff involving a local man and his pregnant girlfriend, "Anytime an outside stressor comes into play in families where there is abuse, the violence will escalate, especially over the holidays. Don't get me wrong — Christmas doesn't make families violent. But if there are domestic violence issues in the family, it often escalates."

We don't have to go all urban legend about on the worst times of year to get in a domestic dispute — it can happen at any time. A 2008 US Census report detailed more than 60,000 domestic violence calls in just one September day. Nor, as the incredibly murky details of both Woods' and Sheen's stories suggest, is the story always a straightforward case of male-on-female abuse — men make up approximately 15 percent of domestic violence victims.

One thing is clear — the pressure cooker period between Thanksgiving and New Year's is particularly, sometimes tragically, fraught for men and women who are already vulnerable — those with a history of violence and substance abuse, for example. And though they missed celebrating Christmas together, Sheen's wife has apparently belatedly given him something to remember her by — a restraining order.