Directors of the decade: No. 4: The Dardenne brothers 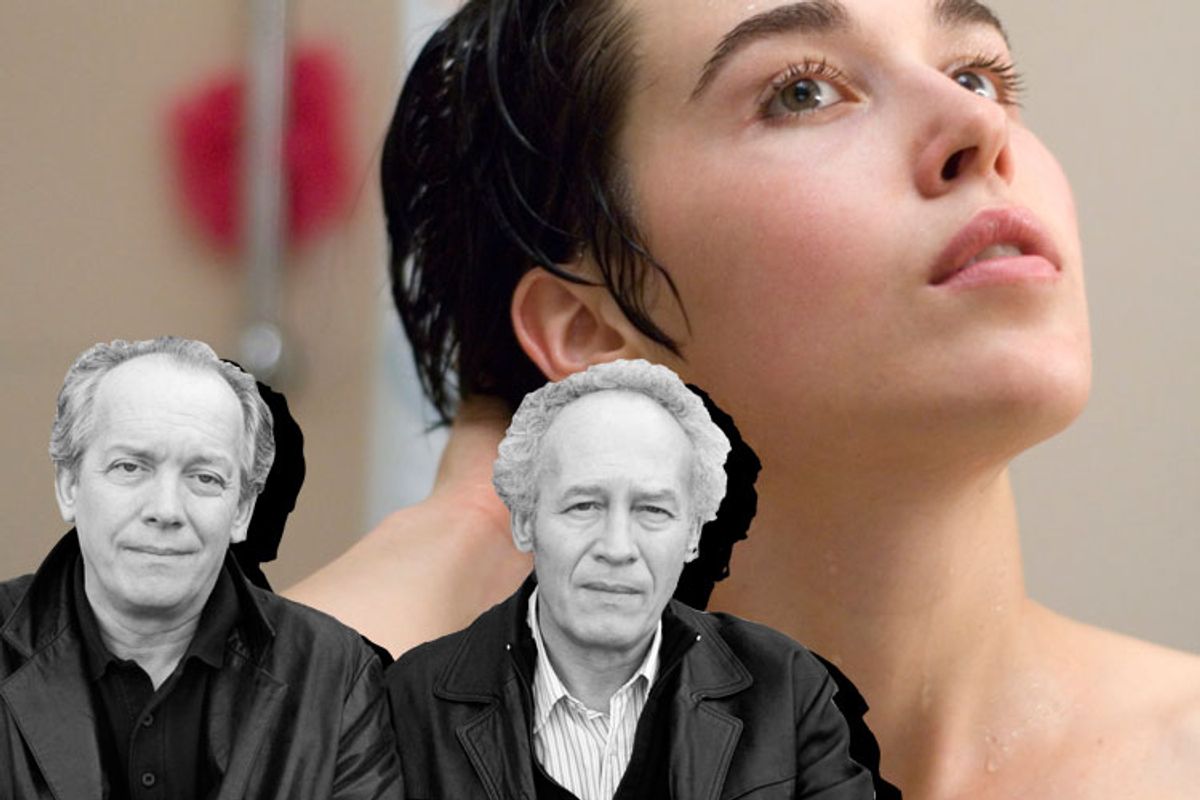 So much of modern cinema is built on visual flourishes and technological gimmicks that it's easy to forget that the most enthralling special effect of all is the sight of characters moving through space, their body language, facial expressions and mundane actions telling you what they believe and feel. The Belgian filmmaking brothers Jean-Pierre and Luc Dardenne — writer-directors of "The Son" (2002), "L'Enfant" ("The Child," 2005) and last year's "Lorna's Silence" (2008), believe this, and they've created a distinctive aesthetic around their conviction. They tend to tell stories about poor or working-class people. They employ long takes, existing locations, ambient sound and natural (or natural-seeming) light to connect the characters to their surroundings, and emphasize how the characters' physical environment and social conditioning shape their personalities and affect (sometimes dictate) their choices.

The Dardennes exemplify a type of filmmaking that's sometimes called naturalism, with all the patience and detached (but never cold) scrutiny that phrase implies. They study human beings in their natural habitat, hoping to understand and show why we are what we are. This kind of filmmaking is quite different from the kind practiced by the filmmakers I call the sensualists, because where sensualists revel in poetic subjectivity — compiling entire features composed of little besides what the filmmaker Caveh Zahedi calls "the holy moment" — the Dardennes' style of filmmaking goes the other way.

It's also different from the Dogme 95 movement spearheaded 14 years ago by Lars von Trier, Thomas Vinterberg and other Danish directors; that mini-school, which was based around a "vow of chastity" manifesto that even its creators didn't really follow, was mistakenly labeled naturalistic by some reviewers. It wasn't — at least not in the deep sense in which the Dardennes' films are naturalistic. Dogme filmmakers did embrace small stories, available locations and simple shooting, the better to rescue cinema from the tyranny of scale and reconnect it with reality. But they also broke their own rules left and right and pretty much abandoned the movement a few years ago — and their films tended to be grotesque, surreal and otherwise exaggerated, more connected to avant-garde drama than to everyday living. The reality of their movies was that of the bottom line: How exciting can we be if we don't have any money?

If the sensualists are poets and the Dogme filmmakers are shock-theater pranksters, the Dardennes are prose writers — which isn't to say that they're unimaginative (quite the contrary) but they work in a radically different mode than the sensualists — more like grubbily realistic yet subtly lyrical fiction. New York Times film critic A.O. Scott made this connection in his 2002 review of "The Son," an unsentimental but moving drama about a man named Olivier who teaches carpentry to juvenile delinquents, and who gradually realizes that his latest apprentice, a teen named Francis, was responsible for the death of Olivier's own boy and the subsequent grief that destroyed Olivier's marriage. The film, Scott wrote, "has the balked, minimalist force (as well as the working-class setting) of one of Raymond Carver's better stories. It is hardly surprising that the Dardennes put together their naturalist fable with such a fanatical, self-effacing sense of craft. They are obsessed with work in the way that some of their European counterparts are obsessed with sex: the textures and rhythms of manual labor are, for them, at once irreducibly physical and saturated with an almost spiritual significance."

These last two points are crucial to appreciating the Dardennes. In film criticism, "naturalism" is often treated as a catchall phrase meaning messy or unpolished, and applied to films whose only connection to life in the here-and-now is that the characters stumble through their sentences and are shown in depressing circumstances. The Dardennes' films do both. But they're not only naturalistic in that sense (the superficial sense). They're naturalistic in the 13th-century sense articulated by the natural philosophers who sought rational understanding of life not merely for its own sake, but to understand the spiritual world that they believed existed beyond the veil of this one.

Their films are marvels of documentary-like immediacy, the camera often following directly behind the head and shoulders of a character moving through a significant space — a factory floor in "The Son," for instance, or the streets of the city in "L'Enfant," about a narcissistic petty criminal who seems emotionally incapable of taking responsibility for his newborn son. This type of shot — so strongly associated with the Dardennes that director Darren Aronofsky was widely assumed to be aping the Dardennes in his rough-hewn "Wrestler" — is both a visual and moral statement. It respects the singularity of a character by putting him at the center of the frame while simultaneously insisting that what matters most in the story isn't that one person, but the world he inhabits — an overwhelming, perhaps oppressive world that bustles around him or looms over him as he ambles through it. Such a shot says, "This character is not the center of the universe, he just thinks he is — and the same goes for you, the viewer." And it epitomizes the type of drama practiced by the Dardennes.

Most movie characters are pictured as free agents, existing apart from whatever living space they inhabit and whatever job they hold (if indeed they are ever pictured working). In the Dardennes' films, the drama's foreground (the characters) can never be separated from their background. Indeed, the "background" in a Dardennes film is both figurative and literal — the characters' upbringing and social conditioning play as big a part in the story as their living conditions and jobs.

"Lorna's Silence," about a woman embroiled in a marriage-for-citizenship scam that requires her to be a party to the killing of her junkie husband, is the only one of their three films this decade that departs from their usual workaday mode. It's the weakest of the three, because the mobsters in the story introduce conventional elements of suspense and jeopardy that the Dardennes aren't used to dealing with — and because, while international gangsters do of course exist, their reality is so far removed from that of most moviegoers that their mere presence in a film introduces an element of vicarious fantasy that's otherwise anathema to the Dardennes. But the two other 2000s films — and their breakthrough 1990s films "The Promise" (1996) and "Rosetta" (1999) — are great enough that the misstep of their last effort doesn't damage their claim on greatness. They've made two films this decade so perfect, and so significant for so many reasons, that they make more prolific filmmakers seem lazy.

The Dardennes are not the only filmmakers working in a naturalist vein. China's Jia Zhangke ("The World," "Still Life") is as significant a naturalist as the Dardennes and was far more productive in the last 10 years, dedicating himself to a portrait of China in a state of flux, its citizens' sense of themselves challenged by a rapidly evolving national economy and the seismic impact of globalization. In America, Richard Linklater ("Fast Food Nation") sometimes works in this tradition. On the documentary side, the greatest living naturalist is Frederick Wiseman, who's almost 80 years old and still making his signature epic-length, fly-on-the-wall documentaries, which show regular citizens interacting with the representatives of institutions and governments in minute detail, often in real time.

Wiseman's work this decade includes "State Legislature," about the day-to-day operations of the Idaho Legislature, and "Domestic Violence" and "Domestic Violence 2," which explore the society-wide impact of spousal abuse by showing its victims and perpetrators dealing with counselors, judges and cops empowered to handle the problem. These Wiseman films and others are rewarding if admittedly difficult viewing, requiring a level of concentration that few films ask, and that few viewers are willing to summon.

I'm letting the Dardennes stand for all of this decade's notable naturalist directors, fiction and nonfiction, because the clarity and precision of their work set them apart — and because their approach to drama is unique in its quest to discover something beyond (or inside) the observable world.

I wouldn't call them explicitly Christian filmmakers; the characters rarely invoke the Bible and spend little time in church, and if the films have aspects of the parable, it's more due to the directors' stripped-down style than any overtly literary signposts. But such a distinction might be moot in light of the Dardennes' fascination with guilt, sin and redemption, which is not expressed through hallucinatory imagery or intense scenes of physical and emotional brutality, but through a somewhat dry but never unfeeling quality of detachment. Olivier in "The Son" struggles to answer life's vicious unfairness with kindness, incidentally fathering the boy that was responsible for his own son's death. Bruno, the bottom-dwelling hero of "L'Enfant," travels an even longer road toward grace, selling his son on the black market and then concocting a desperate scheme to buy him back, all the while clumsily groping after a sensitivity that neither he nor anyone he knows ever thought he possessed. Bruno is such a twit, and so seemingly irredeemable, that the film tests one's patience right up until the end — and even Bruno's burst of righteousness is depicted with a certain opacity. You can't be sure if he's done the right thing because he's discovered the father in himself or because he can't deal with having his girlfriend hate him.