This year, "shared prosperity" meant that J.P. Morgan and Goldman divvied up the dollars and cut us out 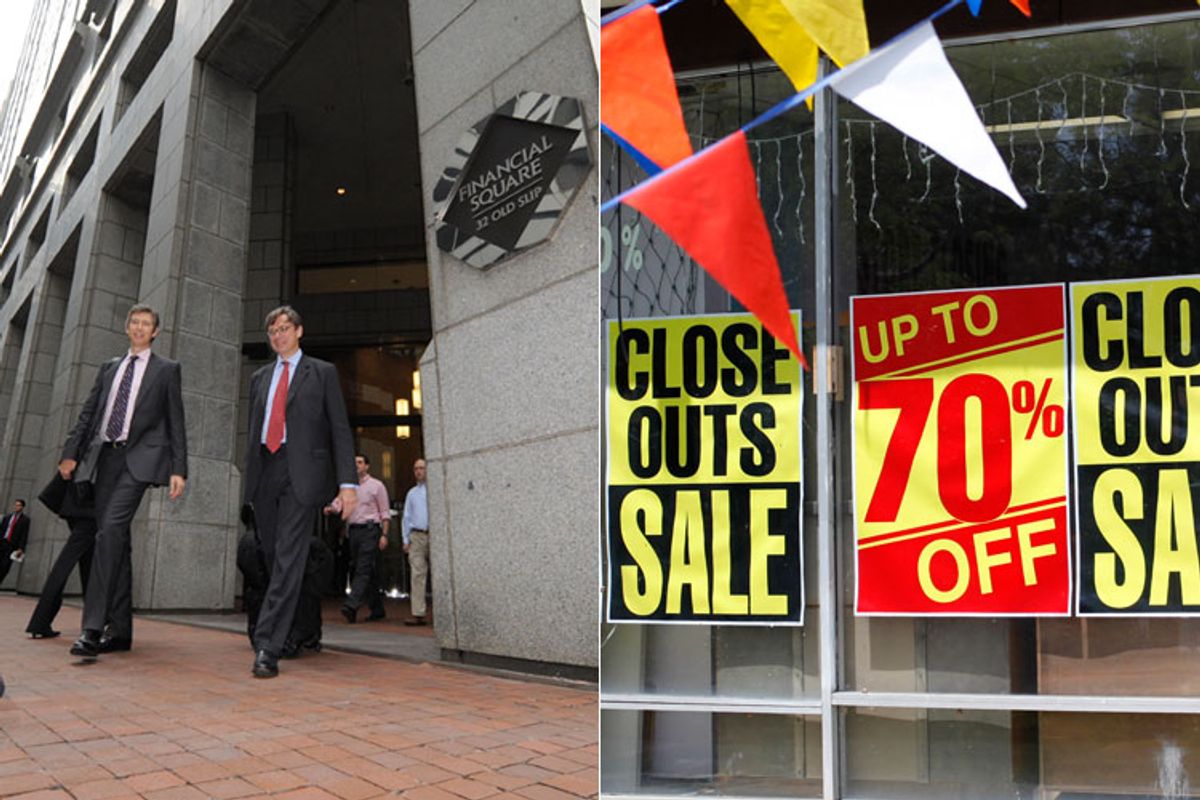 In September 2008, as the worst of the financial crisis engulfed Wall Street, George W. Bush issued a warning: "This sucker could go down." Around the same time, as Congress hashed out a bailout bill, New Hampshire Sen. Judd Gregg, the leading Republican negotiator of the bill, warned that "if we do not do this, the trauma, the chaos and the disruption to everyday Americans' lives will be overwhelming, and that's a price we can't afford to risk paying."

In less than a year, Wall Street was back. The five largest remaining banks are today larger, their executives and traders richer, their strategies of placing large bets with other people's money no less bold than before the meltdown. The possibility of new regulations emanating from Congress has barely inhibited the Street's exuberance.

But if Wall Street is back on top, the everyday lives of large numbers of Americans continue to be subject to overwhelming trauma, chaos and disruption.

It is commonplace among policymakers to fervently and sincerely believe that Wall Street's financial health is not only a precondition for a prosperous real economy but that when the former thrives, the latter will necessarily follow. Few fictions of modern economic life are more assiduously defended than the central importance of the Street to the well-being of the rest of us, as has been proved in 2009.

Inhabitants of the real economy are dependent on the financial economy to borrow money. But their overwhelming reliance on Wall Street is a relatively recent phenomenon. Back when middle-class Americans earned enough to be able to save more of their incomes, they borrowed from one another, largely through local and regional banks. Small businesses also did.

It's easy to understand economic policymakers being seduced by the great flows of wealth created among Wall Streeters, from whom they invariably seek advice. One of the basic assumptions of capitalism is that anyone paid huge sums of money must be very smart.

But if 2009 has proved anything, it's that the bailout of Wall Street didn't trickle down to Main Street. Mortgage delinquencies continue to rise. Small businesses can't get credit. And people everywhere, it seems, are worried about losing their jobs. Wall Street is the only place where money is flowing and pay is escalating. Top executives and traders on the Street will soon be splitting about $25 billion in bonuses (despite Goldman Sachs' decision, made with an eye toward public relations, to defer bonuses for its 30 top players).

The real locus of the problem was never the financial economy to begin with, and the bailout of Wall Street was a sideshow. The real problem was on Main Street, in the real economy. Before the crash, much of America had fallen deeply into unsustainable debt because it had no other way to maintain its standard of living. That's because for so many years almost all the gains of economic growth had been going to a relatively small number of people at the top.

President Obama and his economic team have been telling Americans we'll have to save more in future years, spend less and borrow less from the rest of the world, especially from China. This is necessary and inevitable, they say, in order to "rebalance" global financial flows. China has saved too much and consumed too little, while we have done the reverse.

In truth, most Americans did not spend too much in recent years, relative to the increasing size of the overall American economy. They spent too much only in relation to their declining portion of its gains. Had their portion kept up -- had the people at the top of corporate America, Wall Street banks and hedge funds not taken a disproportionate share -- most Americans would not have felt the necessity to borrow so much.

The year 2009 will be remembered as the year when Main Street got hit hard. Don't expect 2010 to be much better -- that is, if you live in the real economy. The administration is telling Americans that jobs will return next year, and we'll be in a recovery. I hope they're right. But I doubt it. Too many Americans have lost their jobs, incomes, homes and savings. That means most of us won't have the purchasing power to buy nearly all the goods and services the economy is capable of producing. And without enough demand, the economy can't get out of the doldrums.

As long as income and wealth keep concentrating at the top, and the great divide between America's have-mores and have-lesses continues to widen, the Great Recession won't end -- at least not in the real economy.