Stephanie Zacharek on the best movies of the decade 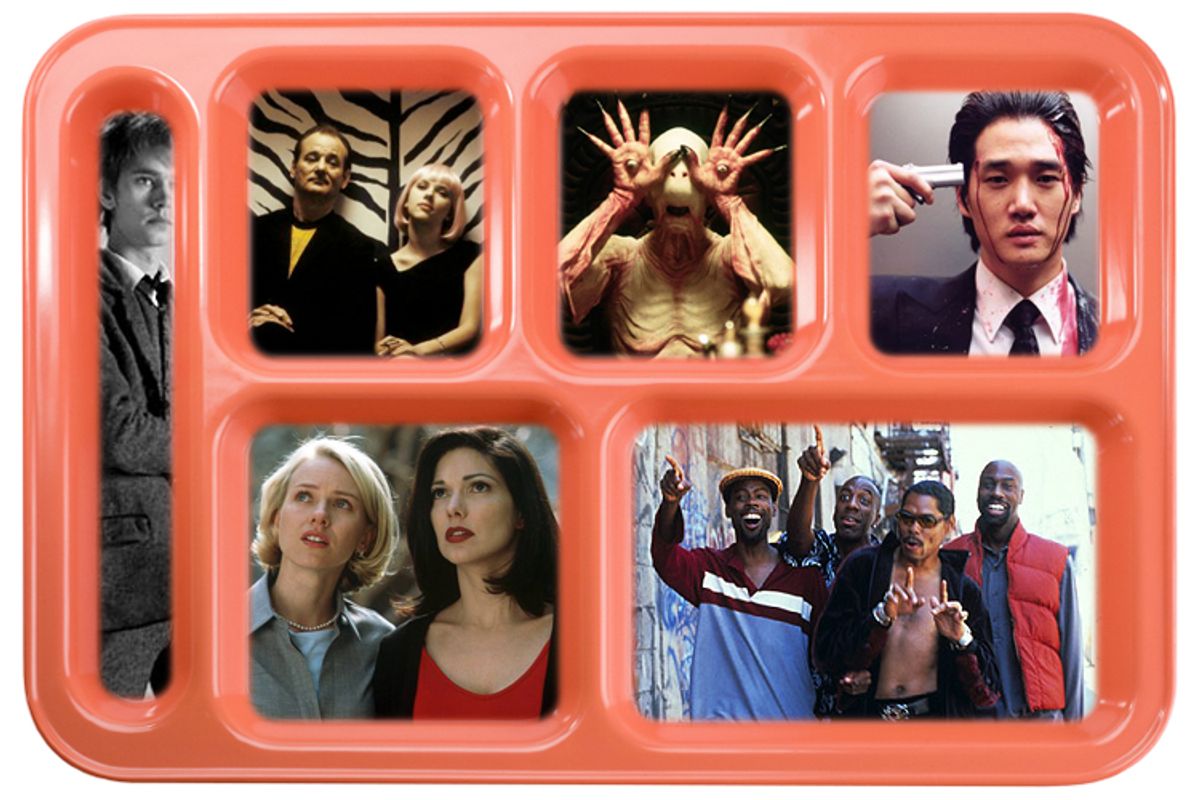 Forget movies that are 30 — or even just three — years in the past: Pictures cycle through theaters so quickly today that it's easy to feel nostalgic about movies that were released three months ago. This week's must-see movie, the one all your friends are talking about and all the blogs are flogging, will be next week's "What was that thing called again?" There are still instances in which word of mouth can expand a movie's popularity over several weeks (the low-budget megaphenomenon "Paranormal Activity" is a perfect example), but it's rare these days for a movie to have much of a shelf life in theaters.

So what does that mean in the context of a "best of the decade" list? By 2009, a movie released in 2001 can seem like ancient history. And yet sifting through the movies I've loved over the past 10 years has made the past decade seem shorter, not longer. Getting off the "What's new this week?" treadmill only makes you realize how quickly time passes — and also realize that movies released at the beginning of the decade can sometimes seem as fresh as if they were made yesterday. Maybe it really is too early to feel nostalgia for Edward Yang's "Yi Yi" or Richard Kelly's "Donnie Darko." But revisiting them in my memory — or on DVD — makes me appreciate how enduring they are, compared with, say, fairly recent hits like "Transformers 2" or "The Proposal," movies that were certified "big deals" during their respective opening weeks.

One last note: Unless you're my long-lost twin — in which case we have a lot more than movies to talk about — there's no way your list of films of the decade will be identical to mine. And that's precisely the point: At the risk of stating the obvious, I note that this list is not objective, balanced or drawn from a survey of other people's favorite movies, nor is it intended as any sort of consensus of what moviegoers "should" like. These 25 movies — I see no reason why such a list has to stop at 10, and beyond my No. 1 choice, they're not ranked in any particular order — are simply the ones I loved best, that gave me the most pleasure or surprised me or moved me, over the past 10 years. And before I get to my own list, I urge you to think about which movies of the first decade of the 21st century have stuck with you. Are they necessarily the big Oscar winners, or the movies all the blogs were buzzing about for approximately 30 seconds before and 30 seconds after their release, thereafter replaced by the next movie du jour? Or are they the oddities that found their way to you through the small modern miracle of the Netflix queue? Whatever they are, please feel free to share them.

"Kings and Queen" (2004) — Arnaud Desplechin explores Tolstoy's "Happy families are all alike" maxim, reaffirming, as Tolstoy did, that it's the stories of the unhappy ones that stick with us.

"Pan's Labyrinth" (2006) — With his glorious and harrowing adult fairy tale, Guillermo del Toro pulled off the difficult feat of using pure sensation to make us think.

"Children of Men" (2006) — Alfonso Cuarón's solemn, haunting picture — set in a world in which humans have stopped giving birth — is made with a bravado that's nothing short of exhilarating.

"Donnie Darko" (2001) — Richard Kelly's bracingly optimistic picture about the possible end of the world died in theaters but found life on DVD, rewriting the meaning of the word "flop."

"The Diving Bell and the Butterfly" (2007) — Julian Schnabel's deeply sensual picture about a man who's capable of moving one eyelid and no more is keyed in to the indescribable something that makes life life.

"Ratatouille" (2007) and "The Incredibles" (2004) — Because I couldn't decide between the two Pixar movies from Brad Bird, I've cheated and included both under the same umbrella. Technical perfection, with a soul.

"Best in Show" (2000) — Christopher Guest and company give their satire about the world of dog lovers just enough bite, without sacrificing human kindness.

"Head On" (2004) — A romance thinly disguised as a meditation on cultural identity — or is it the other way around? — from the gifted filmmaker Fatih Akin, born in Germany of Turkish parents.

"I'm Not There" (2008) — Todd Haynes explains why one of the most vital figures of 20th-century pop culture can never be explained.

"Femme Fatale" (2002) — The bad girl — the schemer, the vixen, the deadly Hitchcock blonde — reinvents herself via Brian De Palma.

"Tropical Malady" (2004) — So strange; so beautiful. In this love story between a soldier and a country boy, from Thai director Apichatpong Weerasethakul, a young man is really a tiger — and that's the explicable part.

""Kill Bill: Vol. 2" (2004) — The second part of Quentin Tarantino's adventure epic has more depth, more drama and more heart than "Vol. 1." Around this time in Tarantino's career, I accused him of being a scrapbook filmmaker who never met an obscure film reference he didn't like. Now, when so many mainstream filmmakers' memories reach back about two years, I'm realizing we didn't know how good we had it.

"Pride & Prejudice" (2005) — Joe Wright's vision delighted some Austen fans and infuriated others. For me, it's a spiritually faithful and unpretentious adaptation that takes the book-into-film challenge seriously.

"Lost in Translation" (2003) — Sofia Coppola makes a movie where nothing and yet everything happens between two people, building toward a moment between them that's so intimate, we're not even allowed inside it. Delicate and magnificent.

"American Splendor" (2003) — Shari Springer Berman, Robert Pulcini and Paul Giamatti illuminate the life and work of comic-book writer, jazz fan and genuine crank Harvey Pekar, and in the process cut to the heart of American optimism — with dashes of Greek tragedy, French existentialism, Italian neo-realism and Russian poetry tossed in.

"The Best of Youth" (2003) — Marco Tullio Giordana's six-hour-long drama, originally made for Italian television, covers more than 30 years in the life of an Italian family, in the process touching upon significant events in Italy's recent past. Like a great, long novel, it's both compact and languorous, and its characters become part of our lives during the hours we spend watching it.

"Oldboy" (2003) — Exhilarating, brutal and desperately alive, Park Chan-wook's modern revenge fantasy is a picture whose beauty springs directly from its anguish. It's like a flower watered with blood.

"Friday Night" (2002) — Claire Denis' tender, one-night-stand reverie might not be as great a movie as her nutso 2005 "Intruder," but it's magical in an earthbound way — the anti-"Amélie."

Best Of The Decade Movies