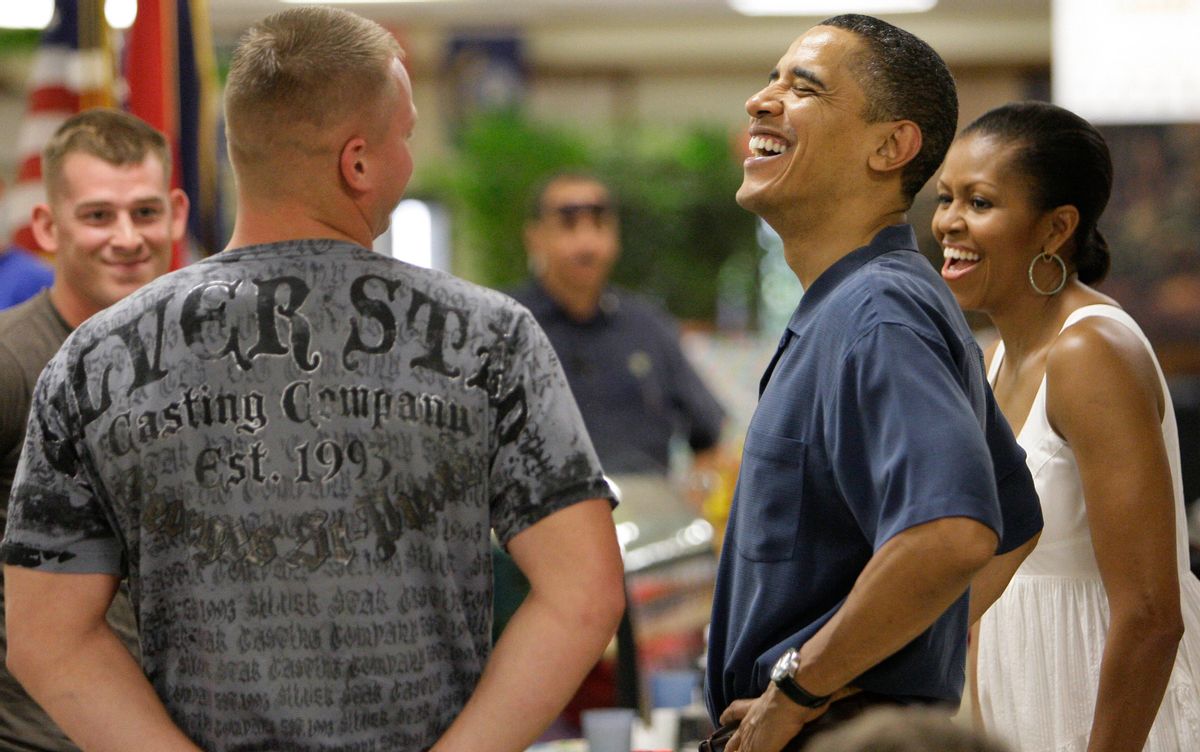 As dumb as our political discourse typically is, it gets dumber by many magnitudes whenever there's a terrorism-related scare (of the Islamic variety).  From The Washington Post's editorial writer Jo-Ann Armao:

Why is Obama still in Hawaii?

President Obama wants us all to know he’s taking seriously the attempted terrorist attack of Christmas Day and that his administration is doing all it can to ensure our safety.  But his words would be a lot more convincing if not delivered during time snatched between rounds of golf, swimming and sunbathing. . . .

Returning to Washington would have sent the world a powerful message of a president willing to drop everything and roll up his sleeves -- someone who really means business. I can't imagine Homeland Security Secretary Janet Napolitano initially being so sanguine about the system working if her boss had hotfooted it back to the Oval Office to personally check up on things. Work situations vary, sure, but in my experience there’s always a lot less pressure when the boss is away.

By staying in Hawaii, the president has sent the message that the situation really isn’t all that serious, that things can proceed just fine until he’s back. And isn’t it that kind of reasoning that emboldens our never-vacationing enemies into thinking Christmas Day is the perfect time for them to strike?

Scampering back to Washington -- "hotfooted" or otherwise -- would have been the worst possible thing that Obama could have done.  It would have created a climate of frenzy and panic and thus helped to terrorize the country even more -- which, one might want to recall, is the goal, by definition, of Terrorists.  The fact that Obama doesn't hysterically run around like some sort of frightened chicken with his head cut off every time Al Qaeda sneezes -- or swagger to the nearest camera to beat his chest and play the role of protective daddy-cowboy -- is one of the things I like best about him.  As for Armao's "point" about how Janet Napolitano probably took it easy because the "boss was away" -- and her belief that Terrorists will strike more on holidays if Obama isn't affixed to his chair in the Oval Office, as though he's the Supreme Airport Screener:  those are so self-evidently dumb it's hard to believe they found their way even into something written by one of Fred Hiatt's editorial writers.

What this actually illustrates is that many people are addicted to the excitement and fear of Terrorist melodramas.  They crave some of that awesome 9/12 energy, where we overnight became The Greatest Generation and -- unified and resolute -- rose to the challenge of a Towering, Evil Enemy.  Armao is angry and upset because the leader didn't oblige her need to re-create that high drama by flamboyantly flying back to Washington to create a tense storyline, pick up a bullhorn, stand on some rubble, and personally make her feel "safe."  Maureen Dowd similarly complained today that Obama "appeared chilly in his response to the chilling episode on Flight 253."

That's because Obama reacted as though this is exactly what it actually is:  a lame, failed attempt to kill people by a fractured band of criminals.  It's not the Cuban Missile Crisis or the attack on Pearl Harbor, as disappointing and unfulfilling as it is to accept that.  It merits analysis, investigation and possibly policy changes by the responsible government agencies -- not a bright-red-alert, bell-ringing, siren-sounding government-wide emergency that venerates Al Qaeda into a threat so profound that the President can't even be away from Washington lest they get us all.  As always, Al Qaeda's greatest allies are the ones in the U.S. who tremble with the most fear at the very mention of their name and who quite obviously crave a return of that stimulating, all-consuming, elevating 9/12 glory.

I'll be on Democracy Now tomorrow morning at 8:10 a.m. EST for a long, year-end discussion of the state of various political matters.  Live video stream and local listings are here.

UPDATE:  This, from Chris Matthews -- in the middle of a three-day rant of fear over Terrorists and airplanes -- makes Jo-Ann Armao's commentary seem brilliant and incisive by comparison (h/t John Cole):

He's scared of Terrorists who know kung fu.  What must be going on in a person's mind to manufacture that fear?  Who sits around creating scary fantasies like that?  As always, the most Serious and Toughest among us are the most easily frightened, particularly in the American media.