The year in celebrity meltdowns

Temper Fi! When stars attack, or otherwise go nuts in public, we love it -- often more than we love their work 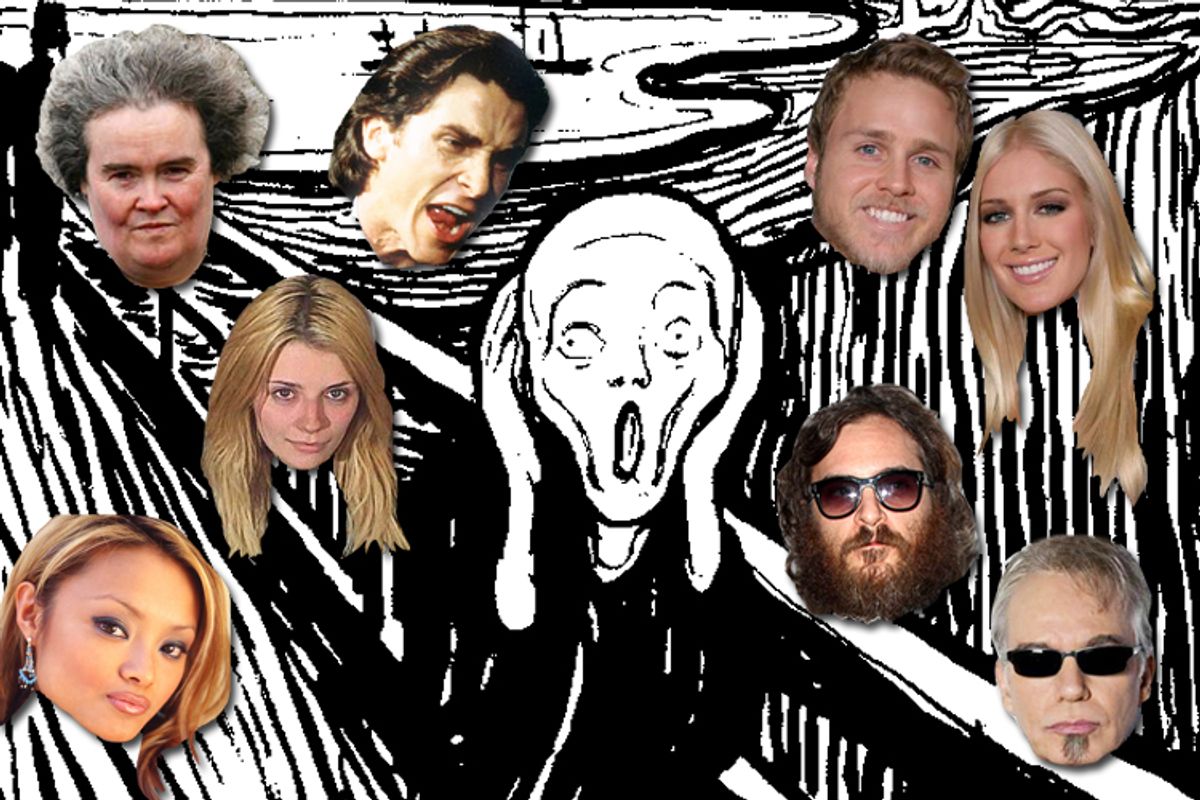 Surely our bottomless appetite for the spectacle of attractive, well-compensated people messing up helped create a perfect storm of giving the people what they want. Had any episodes of disoriented staggering around lately, Amy Winehouse? No? How about now? OK, we'll just stand outside rummaging through your garbage until you do.

And so, as we sat at our laptops this year, aggressively hitting the refresh button on TMZ, we waited and watched for our icons to go off their meds, to lose their shit and to generally behave in a manner confounding, larger than life and just plain nuts. They did not disappoint.

It seems like a million years ago already that the audio of Christian Bale's expletive-rich tirade from the "Terminator Salvation" set went viral. That's because since it first popped up in February, the debonair Brit's apoplectic, American-accented rant at a lowly director of photography who dared to wander into his shot has become a mashup classic. It was parodied on "Family Guy," spliced with the footage of that poor kid coming back from the dentist and, most brilliantly, turned into the dance remix of the year.

Bale, who in 2008 was arrested for allegedly assaulting his mother and sister, promptly apologized for his freakout, saying he "acted like a punk," but we think he's still got a follow-up hit in him. Somebody please, walk into his fucking light again.

When you name yourself after a potent alcoholic beverage, you're probably pretty comfortable with unusual behavior. But after making serious allegations of physical abuse by her NFL-star ex-boyfriend, Shawne Merriman, the diminutive starlet went particularly coo-coo for cocoa puffs during a late-night session on Ustream. In the November clip, which apparently went on for hours (and Tequila quickly removed), she stripped, wriggled her ass and ranted that "I think a woman's body is a beautiful thing ... that's why I'm a lesbian ... I was born naked ... anybody who is against that is gay and in denial." And that her former beau was "sleeping with minors ... little girls" and "don't even support his own people" (sic).

For those of you short on time or patience with the incoherent, go directly to 2:46.

Tequila soon retracted her words, claiming the stress and anxiety from the alleged assault had sent her temporarily off the rails. She seems to have rebounded nicely -- in December she announced her engagement to Johnson & Johnson heiress/grand theft larceny suspect Casey Johnson. Is she nuts? Chemically altered? "Anxious"? All we know for certain now is that like so many of us, Tequila loves to hang around at home singing and dancing in her underwear.

With one tear-jerking, ass-kicking breakthrough performance, Susan Boyle redefined the term "overnight star" last spring. Is it any wonder that the glare of swift and relentless fame took a toll on the unemployed, small-town woman with no professional experience?

After losing the top prize on "Britain's Got Talent," she wound up in a hospital suffering exhaustion and retreated from the limelight. Calling her sudden career catapult a "giant demolition ball," she admitted, "I needed a rest, just to get away." It seemed for a while she was destined to be the pop-culture blip of the month, going from fame to infamy to obscurity with breathtaking speed. But huzzah for Boyle, who told "Today" this summer that, "I'm the type of person that just couldn't stand up for herself very well, but I got over it. I'm getting over it now." In November her first album debuted at the top of the U.S. and U.K. charts. Dreams do come true.

We've known Thornton had a whole heap of weird in him since back in the days he was strutting around with Angelina Jolie's blood around his neck. But while promoting his band the Boxmasters in April, he outdid himself during an interview for a Toronto radio station. As the video of the conversation went viral, it was clear the episode had more uncomfortable moments than the entire run of the British version of "The Office."

For an excruciating 15 minutes, Thornton stared blankly into the middle distance and intoned, "I don't know what you're talking about" when confronted with even the simplest of questions about how long his band had been together or his opinion of Willie Nelson.

He later explained his trip to Mars by way of Canada on "Jimmy Kimmel" by saying the DJ had "lied to me to my face," saying "I told a DJ to kiss my ass, that's all that happened." And during the course of the interview Thornton did indeed take umbrage with host Jian Ghomeshi for mentioning his guest's day job as an actor, telling him, "You were instructed not to talk about shit like that" and comparing himself to Tom Petty. (Hey, if we had Thornton's recent film career we might not be bragging about it either.)

Yet, from the moment he was introduced on the show, the 53-year-old aspiring rock star did not appear to be in kiss-my-ass mode but closer to the flat-on-the-face zone, veering off on tangents about his childhood reading habits. But let's take him at his word. Maybe Thornton really was just pissed at the DJ daring to not introduce him exactly the way he wanted, and punished him with sullen spaciness. Which would make him not crazy -- just a raging douche.

Dude, you're supposed to walk the line, not lurch over it. At first it just looked like he was prepping to star in the Zack Galifinakas story. But when shaggy haired, slightly gone-to-seed Joaquin Phoenix took the stage on "Letterman" last February, he quickly entered the Farrah Fawcett "Late Night" Disaster Hall of Fame.

Professing that the was not going to act anymore, he shrugged and said, "I've been working on my music. I do hip-hop." Then he commented on Letterman's raggedy cuticles and stuck his gum under the desk. Things didn't get better during a Miami "performance" in March, when he jumped offstage to go after a heckler. The skeptical have suggested Phoenix's latest incarnation is a piece of Andy Kaufman-esque performance art, noting how brother-in-law Casey Affleck conveniently always seems to be around to film his meltdowns for a documentary they're rumored to be making. So the actor, who did a stint in rehab in 2005, is either slumming in Crazy Town or currently residing there. Either way, we miss that smoldering Oscar nominee of the not-so-distant past.

She earned herself a DUI in 2007. Rumors of hard partying swirled around her in 2008. Then this July, the 23-year-old former "OC" star called the police to her home and wound up in involuntary psychiatric hold at Cedars-Sinai Medical Center. Citing a bad recovery from having her wisdom teeth removed and too much stress and pressure, she referred to the incident as a "meltdown" and "rock bottom" on a September episode of "The View."

And as she told Time Out, "I was down in the dumps about everything there for a while ... I got completely stressed-out and couldn't handle everything, and now I feel really in control." Hope that resilience holds: Her new series, "The Beautiful Life," was canceled after two episodes.

Proving that even people who compulsively star on reality shows have their limits, world's most overexposed couple Heidi and Spencer Pratt hit the wall in June while filming "I'm a Celebrity, Get Me Out of Here!" Taking the title literally, Spencer hooted, bellowed, made unusual noises and howled into the Costa Rican jungle that "I'm too rich, I'm too famous and I'm outta here."

His bride, meanwhile, wept copious on-camera tears because her fellow contestants "completely took off all my labels and everything on my dry shampoo." They threatened to quit. They really really threatened to quit. Then they quit, and ulcer-ridden Heidi wound up in the hospital. Did we mention that before the very publicly Christian couple hightailed it out, Spencer got himself baptized by Stephen Baldwin? They then followed up their summer of love by getting into a feud with Al Roker (Al Roker!) and shopping around a new reality series. Had enough? We're just an innocent public. Get us out of here.

Sending journalists into a frenzy of epiphanies that female athletes can be as temperamental as their male counterparts, the crankier of the Williams sisters went ballistic on a lineswoman at the U.S. Open over a foot fault. In a tongue-lashing that threatened to short-circuit CBS's bleep button, Williams swore she was "fuckin' takin' this ball and shovin' it down your fuckin' throat. I swear to God." She ultimately lost the Open, but won herself an $82,500 fine and a place in the upper ranks of legendary outbursts.

A year without Love sticking her foot in her mouth would be like a year without Kanye West sticking his foot in his mouth. So imagine our total lack of surprise when the singer, a true pioneer in the world of online oversharing, took to Facebook in November to apply her creative spelling and punctuation to the sentiment that "britneys dad molested her, imagine the father that molested you owning you for slavery while your forced to sing songs picked for thier sexual content every night, insane right? i have it on First had authority, and fight as hard as she is and does she still didnt pull that card, its a pride thing i can relate to, However they want to play dirty, lets go, Im SO not affraid of the little trolls who hit this when i was f***** up who are called lawyers. lets GO."

Appropriate response of the year award goes to Spears' camp, which replied, "We're not commenting on Courtney Love, or any aliens who might come to Earth to impregnate people."