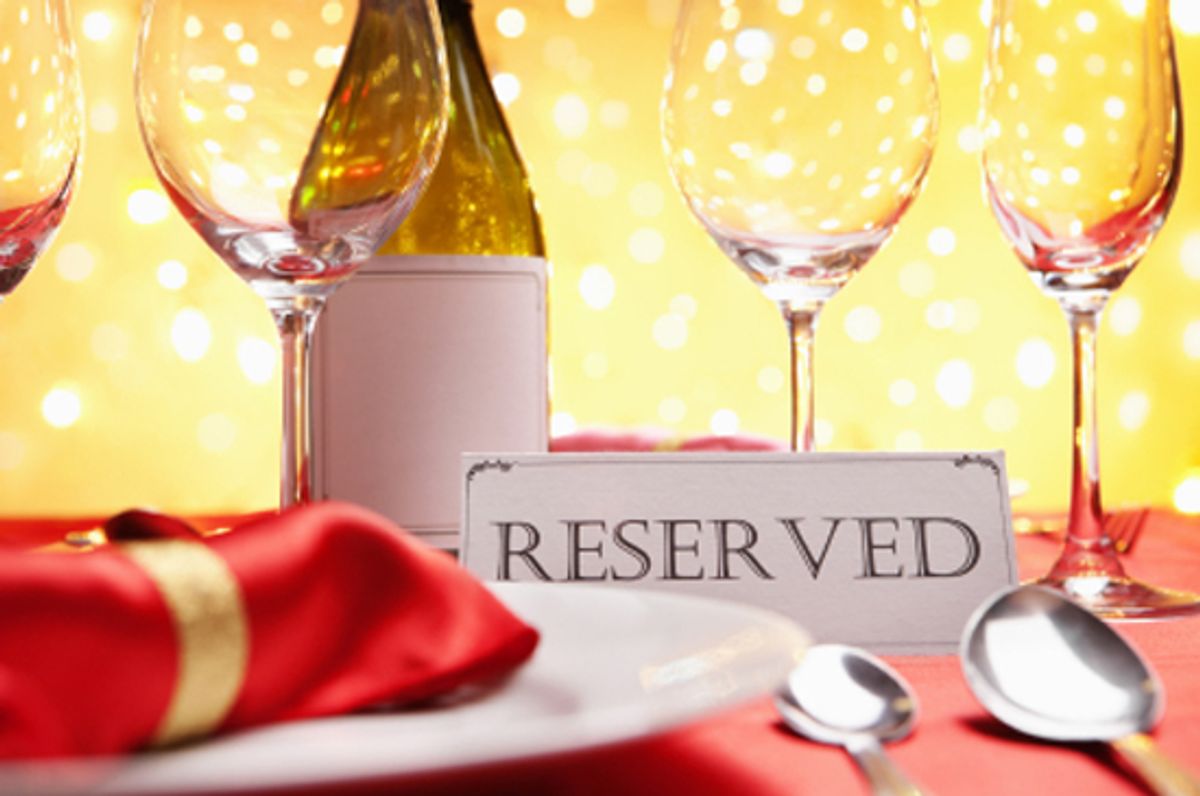 All things considered, this isn't really the happiest of New Year's Eves for the restaurant industry. Despite what Ben Bernanke says, the economy still feels grimmer than a Tiger Woods family reunion, and restaurateurs continue to be hit hard (especially high-end ones) by America's newly frugal lifestyle. Back in the pre-recession years, New Year's Eve allowed many restaurants to turn a hefty profit — with elaborate, and often very expensive, multicourse prix fixe menus — but this year, it may not be easy. After a grim 2009, the food research firm Technomic predicted that restaurant revenues would fall again in 2010, and ominously, a recent British survey found that 80 percent of people plan on spending New Year's at home.

That isn't stopping some restaurants from putting together the usual intricate New Year's dinner — and in some cases, charging astronomical prices. At New York's Aureole, for example, diners will be getting a five-course meal including big-eye tuna sashimi, chestnut ravioli, Canadian lobster, and N.Y. strip loin. The price: a mind-boggling $650.

To put Aureole's $650 price tag into context, we talked to renowned food and restaurant consultant Clark Wolf about the meaning of New Year's for the industry, the recession's impact on New Year's menus, and the one dish that defines this year's celebration.

How big of a deal is New Year's Eve for restaurants, really?

It can be a very big deal — but it depends. Very high-end places like Daniel and Le Bernardin can do New Year's Eve, but they don't have to. It's almost like they do it as a service to their clientele. It's the middle that has to work hard. In the down economies, what the smart people do is charge moderately above their check average [the average amount of money a guest spends in a restaurant] .

If their check average is $125, they'll charge $150, $175 for a prix fixe with some choices — limit the menu to some degree and give some options, but don't gouge. New Year's Eve is part of the entire holiday season effort for restaurants. You can find out how you did in your holiday season by how you're doing in January and February.

So basically, a fancy New Year's Eve dinner is a restaurant's enticement for people to come back in the new year?

If you do your job, they'll keep coming in January. It's like a Thanksgiving family dinner: If everybody gets along, you'll probably talk more after.

What's the logic behind the higher prices?

The logic is, you want it to be special. You want them to know you're doing more, plus things just cost more to do on New Year's Eve. Restaurants aren't the only people who charge more. The flower vendors do. Even ingredients often cost more.

Do you think restaurants have changed their New Year's approach compared to last year?

Oh my god, absolutely. Last year people were panicked. This year they're trying to think about what to do. If they're a special-occasion restaurant, they're staying open. If they're an everyday restaurant, they're closing to be nice to the staff. Restaurants are trying to find ways to be useful to people's lives. Last year everything was completely uncertain. Our economy went to the edge. It was terrifying. There was a real deep and broad fear. Now [diners] are making choices. For example: Tuesday we don't need to go out to dinner, but New Year's Eve we do.

What do you make of Aureole's extravagant $650 New Year's Eve dinner?

I think that says to you, That's a corporate restaurant subsidized by money people for money people. It's near Times Square. It opened in the midst of the downturn, so they need to get some money. They need to put on a show — which they can do. They want you to be reminded of Aureole so you'll go back.

What do you expect to see on restaurant menus on New Year's Eve?

I think we're going to see a lot of macaroni and cheese with truffles on top. We want the comfort but with the luxury on top. There's such a focus on good, pure food as being the greatest reward right now that I think we'll see more of that, both on New Year's Eve and not.

It's not macaroni and cheese, but if you've been lucky enough to score a table, here's what you'll be getting (and paying) on Dec. 31 at some of the country's most distinguished restaurants:

Le Bec-Fin, Philadelphia: $145 for several courses that include Kumamoto oyster with American caviar, truffle-stuffed turbot, and Colorado rack of lamb.

Charlie Trotters, Chicago: $350 (plus $175-$250 for wine pairing) buys you, among other items, black truffles, Osetra caviar and "premium Japanese beef."