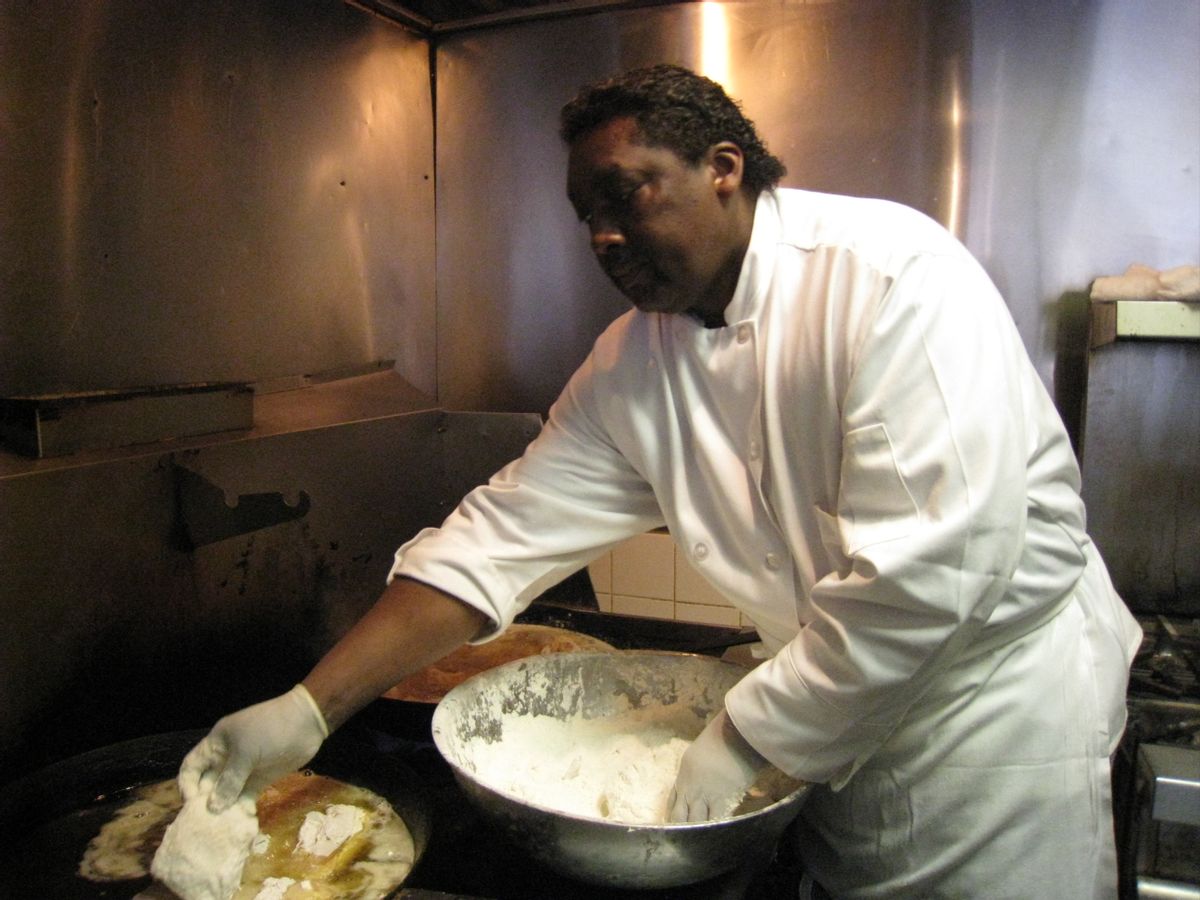 When a man talks to me about his banana pudding, I assume we will talk about many things. I was mid-meal at Charles Gabriel's restaurant, marveling at the juice from his chicken, when I leaned back from my table to ask Mr. Charles if the bowl he was cutting bananas into was otherwise filled with Nilla Wafers and custard. When he got to talking about how the texture of the pudding changes as it sits, I knew I was going to make him my teacher in the ways of the Southern kitchen.

Charles Gabriel is renowned as a fried-chicken master, deserving of his floppy white hat, the kind that usually sits on the heads of cartoon chefs. But masters are sometimes protective of their specialties, so I intended to start by asking him about collard greens and hoppin' john and whatever else he might make for a traditional African-American New Year's before seeing if he'd mind getting into it with fried chicken. Besides, I don't want to pigeonhole the man.

But when I came to his kitchen, the smoky oil vapor stinging my eyes, his round face bore a smile. "I don't cook much for New Year's," he said. "I'd rather go to Vegas." He knew what I wanted: He had chicken parts marinating in a tub and a bird on a cutting board to show me how he likes to take it apart. "I get nine pieces out of a chicken," he said, and he was barely finished with his sentence when off flew the wings. His movements weren't the precise, graceful ones of fine dining chefs, threading thin blades through joints and slipping meat off bone. They were strong and practiced. Whack! Crack! And the pieces came apart for him with ease.

He walked me through coating the birds, curling his thick hands into generous bowls, giving them a delicate toss in a tub of flour big enough to bathe a child in, and then he took me to his manhole-size pans, the ones for which he named his restaurant: Charles' Country Pan Fried Chicken. It's been 20 years since Mr. Charles has been in business for himself, 20 years and 5 million pieces of fried chicken, give or take a couple hundred thousand. Not one of them found its way into a deep fryer.

"See, in a deep fry, the chicken cooks under the oil," he said. "They sit on top of each other, pressing each other down in the oil. Here, it's half in and half out. I'm turning it, so the grease doesn't have time to penetrate. It takes time. It might take 15 minutes, I'm turning and turning. In a pan, I stay with the chicken. I work with it."

He had 40 pieces in the two pans. It's not entirely easy to see the color develop on the crusts, sitting as they are in roiling oil, so Mr. Charles flipped them by some combination of sight and sixth sense. As he worked the fry, I could see the where the pan makes a difference; the browning is more intense where the pieces rest on the hot metal, giving a richer flavor than deep-fried chicken, where you might be afraid of overcooking the meat before getting that kind of color. The pans also give his fried chicken imperfections — a patch of less-crisp skin here or there, the kind of imperfections that give contrast and charm. They give evidence of his hands.

But as I pressed him to talk about why he insists on using these pans, a commitment that means most of his waking life is spent turning chicken, he spoke mainly of family and past. "A pan is all I ever cooked in," he said. "When I was coming up, that's how my momma taught me how to fry chicken. I grew up in the country part of Charlotte, North Carolina. Back down South, we did sharecropping, picking cotton, 6 a.m. in the field till we left at 6 p.m. to go home. That's when we all cooked; we was 12 boys and eight girls, and my momma taught us all how to cook."

"I came up to New York 45 years ago. I'm 63 now. It wasn't my plan to open a restaurant. But up here, I saw that no one was frying chicken the way I knew how. So I said to myself, 'I'm gonna get my frying pan, and I'm gonna fry chicken.' No one uses a frying pan in New York. I know, because people come in all the time and say, 'Where'd you find that pan?' No one can find pans this big!"

I marveled at them, their handles jutting three feet into the air, making us look doll-size. Thick and heavy, the pans have the gravity of heirlooms, but Mr. Charles actually manages to wear them out. "I just can't throw them out. I keep them in my basement. They're my souvenirs," he says. The ones on the burners are babies, only a year old, but they already have that black on them, the black that comes with age and grease.

He started pulling chicken out of the oil, setting them on a draining rack, and I could hear their crusts make sandpaper sounds as they rubbed against one another.

Someone knocked, impatiently, on the door to the kitchen. Mr. Charles looked, for a half moment, less than happy as the man hollered something with impatience. Finally we heard what he was saying: "When are you going to have ribs again, Charlie?" Another customer came in from New Jersey, wished Mr. Charles a merry Christmas, and left clutching his bag of chicken to his breast.

By now, he may be used to having fans. Twenty years ago, back when food trucks were still a long, greasy way from being sexy, Mr. Charles started rocking the cast iron on his home stove, cooking at dawn to drive around Harlem with warming drawers full of food. "This ain't gonna work," he thought, but his heart lightened when he realized people appreciated him. "People started to say, 'Where's the Chicken Man at?'" he said, smiling. "This guy from the New York Times, he would come up in a cab, eat it, and go back downtown. He did that every day for a while, and that's the first time I got written about." From that review on, Mr. Charles' name has taken its place in the pantheon of New York food cult figures, up there with the pizza master Dom DeMarco, Cake Man Raven, and the ever-regal Lemon Ice King of Corona.

I asked if the fame or all the time on his feet has caused him to develop a personal style in his food. "I just cook everything like I was taught," he said reflexively. He paused, then added, "Well, I put the flavor to my vegetables myself. I make my seasoning. But my favorite thing is cooking my momma's chicken. When I get in there..." He gestured toward his pans. "There's just something natural about it for me."

"Has your family ever eaten your food?" I asked.

"Oh yeah. My parents passed, but I used to go back home for family reunions, and I'd do all the cooking. Their stove was too small for me to get it together like I wanted to, so I'd cook here, pack it up in my car, and drive down. As soon as I get there, they'd all be waitin'."

"And what did your mother think about your chicken?"

Mr. Charles broke into a huge smile. "She said, 'It tastes just like I taught you.'" Visit Mr. Charles, and taste his cooking, at: