Not without my Feria

Want to make a resolution you can keep and kick the recession blahs, too? Forget diets. I'm talking about hair dye 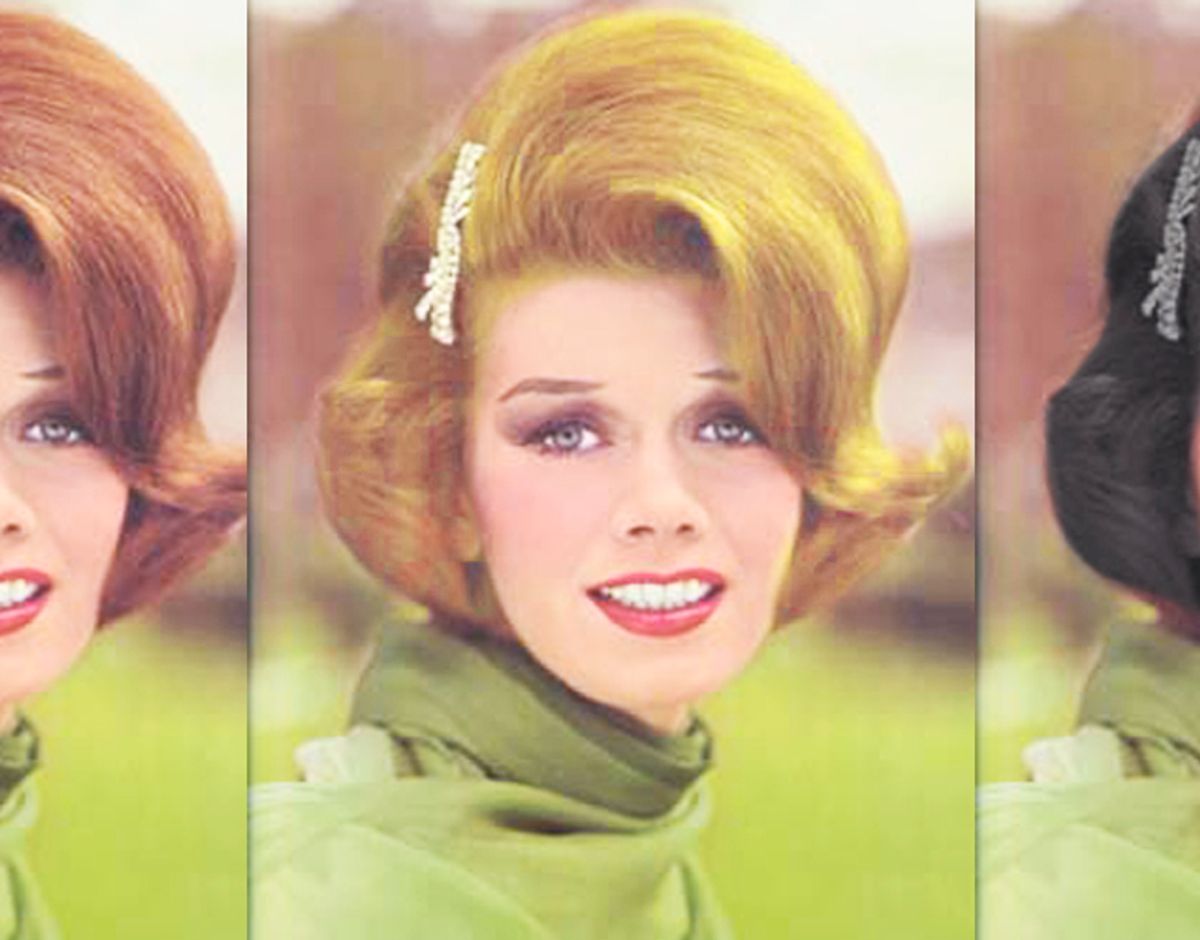 Anyone who's ever made a New Year's resolution knows that true change takes time. Weight creeps off slowly and packs back on. Nails remain bitten, novels unfinished, conversational Spanish unmastered and treadmills gather dust. There's no such thing as a quick route to stunning transformation. Well, unless you're talking about hair color.

There's a reason why nearly every ugly duckling romantic comedy features the heroine triumphantly emerging from the hairdresser's chair, why Susan Boyle ditched the gray after becoming a YouTube star, and why Carrie mended her broken heart by going brunette in "Sex and the City." Because that shit is real. If one in three women (and plenty of men as well) are regularly submitting themselves to the indignity of slathering their heads with smelly goo, it's because there's no cheaper, stronger mood enhancer outside your local meth lab.

And when the going gets tough, the tough reach for the squirt bottle. Forget the "lipstick effect" of past recessions -- in this bottomed-out economy, we need sterner stuff than the comforts of Clinique's Black Honey. We need something that will stay put, unlike lipstick, through a budget-friendly evening of pizza, off-brand beer, and making out. In short, we need some glossy lowlights, stat. Last year, the U.K. Telegraph noted a recessionary "gold rush" of women going blond. Meanwhile, in the U.S., home hair color sales have shot up, and prestige salons like Frederic Fekkai and Umberto Beverly Hills have, in the last few months, debuted their own over-the-counter coloring lines. Precious few among us can afford a superstar stylist (yes, they exist), but more than ever, we can attest to the near magical metamorphic power of hair color.

I've been on the bottle since I started college, when I acquired my first boyfriend, picked up smoking, and bought my first box of L'Oreal. And thus began one of the most enduring and important relationships in my life. With L'Oreal.

Emancipated from the shackles of home, Catholic school and anybody who knew me as that somewhat chubby brunette in the back row, I reinvented myself. In the space of one hour in the dorm bathroom, I had killed that shy schoolgirl under a gallon of peroxide and developer. Though I never became the Rita Hayworth-esque titian-haired siren I'd aspired to, I never looked back.

Perhaps friends and family noticed a worldlier gleam to my eye, a Marlboro Light in my hand, a bolder shade of lipstick on my mouth, and that my adolescent baby fat was melting away. But really, I was a different girl because I had different hair. It wasn't that I had anything against my natural shade of brown. I had just always aspired to be something else -- like Brenda Starr, the adventurous, globetrotting journalist who traipsed through the Sunday comics with a nose for news and a glorious head of Pantone 199. And, hey, becoming a writer takes time. Becoming a redhead? It was over faster than losing my virginity.

My friends were doing likewise. Youth, after all, is a time of exploration and reinvention. And those of us who lived through the '80s -- truly an era that can be summed up with the words "big, bleached out hair" -- have the pictures of our Debbie Harry and Cyndi Lauper experiments to prove it. The boomers can claim the sexual revolution and the peace movement, but it was Gen X that took hair color out of the back alley salons and into the front row of a "Poison" concert.

Rebellious suburban girls were grabbing bottles of Manic Panic and going shocking pink and acid green, becoming instant rocker chicks. Average-looking dishwater blondes suddenly became bombshell mini Marilyns, and mousy girls-next-door morphed into black-clad, don't-fuck-with-me, raven-haired sophisticates. Who could blame us? You've heard of dressing for the job you want? Well, we were dyeing our hair to match the person we wanted to become. We didn't have "extreme makeovers" or Botox lunches. But we had the camaraderie of stinking up a bathroom and emerging fresh and new.

It still works now. Coloring one's hair, whether you're a teenager sticking it to your parents or a dowager looking for new lease on life, is like having Ty Pennington standing outside your house with a megaphone and a demolition squad. I'm not saying a pair of Spanx and a good blowout can't change you in the blink of an eye, too, but nothing, nothing can do it more dramatically -- and enduringly -- than dye. Makeup and control garments are mere loaners from the fairy godmother. By the end of the night, their time is up. Hair color, on the other hand, will give you at least a good month, which is more than I can say for several of my relationships. And yet, if things go wrong and you don't like it, it's easy to wash away and forget it ever happened. Try that with the guy who gave you that urinary tract infection.

But the real effect of hair color isn't how it makes you look -- as occasional blond Tyra Banks might say, it's how it makes you feel. And I could feel the effects before my hair was dry. Deli men were suddenly ignoring my Jersey accent and calling me "the pretty Irish girl," and guys in bars were singling me out from the pack with a "Hey, Ginger." The only downside? I couldn't wear magenta anymore.

Red, despite being a hair color associated with kickable stepchildren, Howdy Doody and David Caruso, suited me. It suited my pigment-free skin and ever-ready-to-make-a-scene personality. Brunettes and blondes -- well, they're in plentiful supply. But to go red, you've got to be willing to stand out, to accept that part of you that is "Viva Las Vegas"-era Ann-Margret and not-quite-ready-for-rehab Lindsay Lohan. You've got to know the Joan Holloway within.

Over the years I've watched friends go through a Scarlet Johansson-level array of follicular palettes, but I've followed the Nicole Kidman path -- dabbling in a range of shades but always remaining squarely in the red zone. I've been a deep burgundy quasi Goth and a copper-headed madcap gal about town and a strawberry blond greenmarket-shopping, stroller-pushing mom. I've had strangers take their pictures with me in China, because, my host explained, my color was supposedly the sign of a witch. Red may take a distant third in popularity contests, but that's what makes it exotic in certain circles. (Not, I note, when I did a semester in Dublin.) Wherever I go, my hair says who I am without needing translation. And apparently I am a lady who gets called "fiery" a lot.

That's why I understand how, no matter how strained the finances, hair color is so often the luxury we're most reluctant to forgo. I have never been too broke, or sick, or tired to dye my hair. With my first pregnancy, concerned about toxins leeching into my growing baby, I dutifully trotted down to the organic store and bought a vegetable hair dye, which was expensive and surprisingly fake-looking. With my second, I folded: If bleach was good enough for Heather Locklear and Madonna during their pregnancies, it was good enough for me.

Yes, I am spending a few hundred dollars a year and letting an array of chemicals like Phenylenediamine seep in through my pores, and eventually, down my drain and yours. But as household products go, hair color is relatively benign. Of course there's a concern that monkeys are suffering somewhere to perfect the next incarnation of my Caramel Kiss #72, but L'Oreal, at least, has been reducing its animal testing for the past 20 years. There are other drawbacks as well: Despite having more than two decades of experience dyeing my own hair, I still manage to flick enough stray color  around to leave the bathroom looking like a scene from "Dexter."

But as vices go, dye is a bargain. (Of course, you can unload thousands on hair dye at a salon over the course of a year, but the joy of color is, you don't have to.) I did far more damage to my wallet and my body when I smoked. As for the charge of vanity, well, I'll just plead guilty and say that anything this cheap that makes a person look and feel this good is worth it. That's why you'll have to pry the Feria out of my cold, dead hands.

I recently met an artist with gorgeous gray hair. I envied her confidence and the undeniable beauty of her chic, stark chignon, but I know that's not my path. I can't rock it like Emmylou Harris. I live in dread of becoming one of those old ladies with drawn-on eyebrows and unnaturally bright, wiglike tresses, so I plan to go the news anchor lady route, edging a little bit blonder with every passing year. But for now, if you're meeting me for the first time, I will help you find me in the crowd the same way I've done it for everyone else over the last 20-odd years. I'll tell you, I'm the redhead. And while my resolutions to eat more fruit and meditate every day and read Virgil are fine for the long-range self-improvement plans, I know that any time I want to become a new and better person, all it takes is 10 bucks, a steady hand and a half hour on the roots.