A memorable documentary captures the last days of Montana sheepherding, in all its "Brokeback" mythology 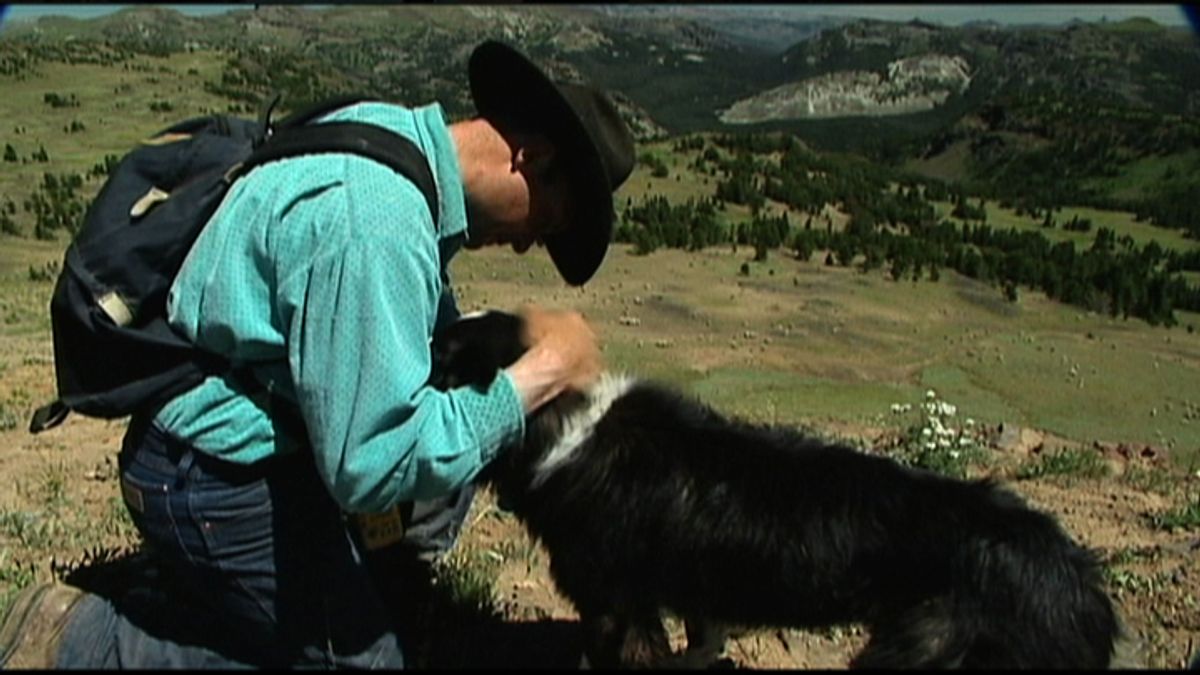 A still from "Sweetgrass"
--

We tend to mythologize certain ultra-masculine occupations as imbued with some essential American ethos: long-haul trucker, big-city police detective, oil-rig wildcatter. But none of those is as redolent of the lost, last frontier as sheepherding in the Mountain West, a job that isn't much different today than it was 100 years ago. At least, until recently it wasn't much different.

I shouldn't issue spoilers even for an essentially non-narrative film like Ilisa Barbash and Lucien Castaing-Taylor's spectacular documentary "Sweetgrass," partly because the story it does tell -- in amazing images that will stick with you for a lifetime -- has all the subtle resonance of Hemingway's best short stories. Let's just say that this European anthropologist-filmmaker couple, working in the strict cinéma-vérité tradition of Frederick Wiseman -- no narration, no talking-head interviews, a bare minimum of on-screen information -- have captured the century-old culture of Montana sheepherding in its last stages.

For three summers from 2001 through 2003, Barbash and Castaing-Taylor (who take credit as the film's producer and cinematographer, respectively, although in any normal sense of the word they are also its directors) followed a group of Montana ranchers and hired hands into the public lands of the Absaroka-Beartooth mountains, where sheep have been herded to summer pasture since the 19th century. First and foremost, they came back with motion-picture images of startling beauty and range: close-ups of the weatherbeaten, laconic sheepherders and their steaming, stoical charges; night images of pulse-raising encounters with grizzly bears looking to poach a lamb or two; extreme long shots of the pulsing gray-white tide of sheep as they're pushed by dogs and men up or down the dramatic mountain landscapes.

The joke about "Sweetgrass" on the film-festival circuit last year was that it was basically "Brokeback Mountain" without the gay sex. You can go farther than that: At first it seems like "Brokeback" without the sex, without the social and familial relationships, and for that matter without the human beings. For the first 18 minutes of the film no intelligible words of English are spoken, and the ratio doesn't improve all that much after that. I suspect the directors are making a point: Language plays a role in "Sweetgrass," eventually, but mostly as a musical or rhythmic counterpoint to what we see on screen. It doesn't serve to explicate the action or to uncover psychology -- except for the one scene where it does, one sheepherder's tearful mountaintop cellphone conversation with his mother. (In this formal and structural sense, "Sweetgrass" bears some similarities to British visual artist Steve McQueen's "Hunger," one of my favorite films of last year.)

Gradually, and just about the time you've given up any narrative expectations for "Sweetgrass" and settled in for a purely visual and auditory experience -- men, horses and dogs, wrestling with large numbers of intractable, ornery ovines -- it becomes a story after all. It's a story of immense loneliness, arduous physical labor and humanity's ambivalent relationship to nature, which even today we worship and fear in varying degrees. It's the story of two cowboys (they use the word), one who coos and sings to the sheep, addressing them as "my girls," and another who harangues them with hair-curling profanities.

Barbash and Castaing-Taylor make no effort to resolve this story's ambiguities, but I think if you focus on the most obvious environmental-policy dilemmas you're missing the point. Should sheep-grazing be barred from public wilderness? Should these ranchers have the right to shoot wild bears who are only acting on their nature? I'm not sure. What I do know is that "Sweetgrass" memorably captures a dying way of American life, a marvelously untrammeled American landscape and at least two animals -- men and sheep -- that despite their millennia-long domestic relationship still have a spark of wildness in them.

"Sweetgrass" opens Jan. 6 at Film Forum in New York. It plays Jan. 28-31 in Hudson, N.Y., and opens March 12 in San Francisco, March 26 in Los Angeles and Seattle, April 2 in Boston, April 9 in Detroit and April 16 in Minneapolis, with more cities to be announced.