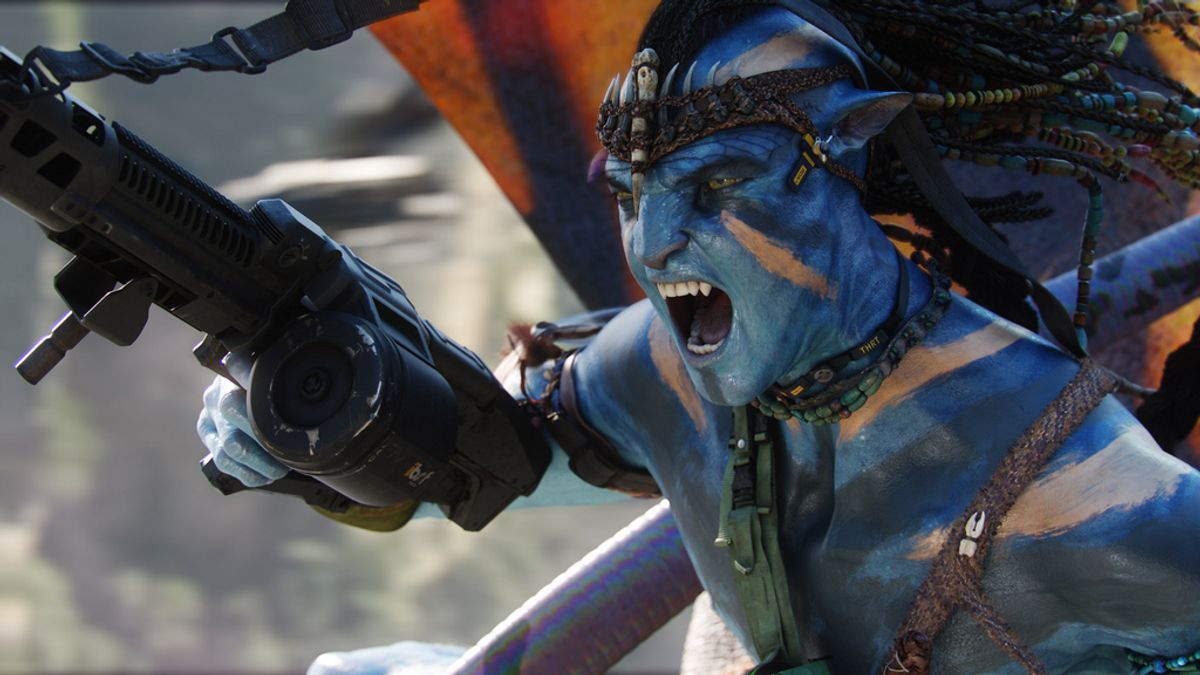 A movie as big as "Avatar" deserves more than one blog post, and I'm afraid I just can't resist poking at the hilarious spectacle of conservative movie critics launching into thermonuclear hissy fits at the anti-American, greenie pagan leftist propaganda embedded in the politics of James Cameron's epic. The Los Angeles Times has a great story by Patrick Goldstein rounding up the outrage.

To say that the film has evoked a storm of ire on the right would be an understatement. Big Hollywood's John Nolte, one of my favorite outspoken right-wing film essayists, blasted the film, calling it "a sanctimonious thud of a movie so infested with one-dimensional characters and PC cliches that not a single plot turn, large or small, surprises ... Think of 'Avatar' as 'Death Wish' for leftists, a simplistic, revisionist revenge fantasy where if you ... hate the bad guys (America) you're able to forgive the by-the-numbers predictability of it all."

John Podhoretz, the Weekly Standard's film critic, called the film "blitheringly stupid; indeed, it's among the dumbest movies I've ever seen." He goes on to say: "You're going to hear a lot over the next couple of weeks about the movie's politics -- about how it's a Green epic about despoiling the environment, and an attack on the war in Iraq ... The conclusion does ask the audience to root for the defeat of American soldiers at the hands of an insurgency. So it is a deep expression of anti-Americanism -- kind of. The thing is, one would be giving Jim Cameron too much credit to take 'Avatar' -- with its ... hatred of the military and American institutions and the notion that to be human is just way uncool -- at all seriously as a political document. It's more interesting as an example of how deeply rooted these standard issue counterculture cliches in Hollywood have become by now."

My first response to these nitwits is to wonder whether any of them went to see either of the "Transformers" movies, both of which kissed American military ass with about as much love as anything this side of John Wayne's "The Green Berets." There has never been a shortage of big budget Hollywood blockbusters aimed at making the U.S. look good. The only thing deeply rooted in Hollywood is a desire to maximize ticket revenue.

And that's what really got conservatives in a pickle. Big government socialism is not rounding up moviegoers and lining them in front of 3-D-equipped theaters. Individuals, acting on their own desires, are plunking down their cash. This is the free market in action. Simplistic left-wing environmentalist propaganda, as realized by Cameron, turns out to be spectacularly popular! Ouch! That's gotta hurt. For right-wingers convinced that a cap-and-trade mechanism to restrict greenhouse gases is an affront to American values, it must be extraordinarily galling to see  the explicit environmental message of "Avatar" embraced so heartily.

A cynic might point out that the real attraction of "Avatar" is not the politics, of course, but the spectacle. Just as I had little problem ignoring the military worship in "Transformers" and managed to have a lot of fun watching giant robots bash each other into smithereens, most moviegoers are probably more transfixed by "Avatar's" amazing CGI special effects than by the idea that the military-industrial complex is a natural-born planet killer.

But what to make of the fact that a movie that portrays a very American-looking military in a profoundly unfavorable light is explosively popular with audiences all over the world? The Wall Street Journal reports that "Avatar" is already the most successful movie ever in Russia, and is drawing huge audiences from France to Brazil. "Avatar" has cleared $350 million in ticket sales in North America, but $670 million internationally.

Anti-Americanism sells -- everywhere. Maybe instead of ripping their hair out at the tragedy of the mass enthusiasm for this "'Death Wish' for leftists," conservatives should be trying to figure out just how such a thing came to pass.

Avatar How The World Works