Despite a progressive outcry over healthcare, incumbent Democrats have escaped primary challenges so far 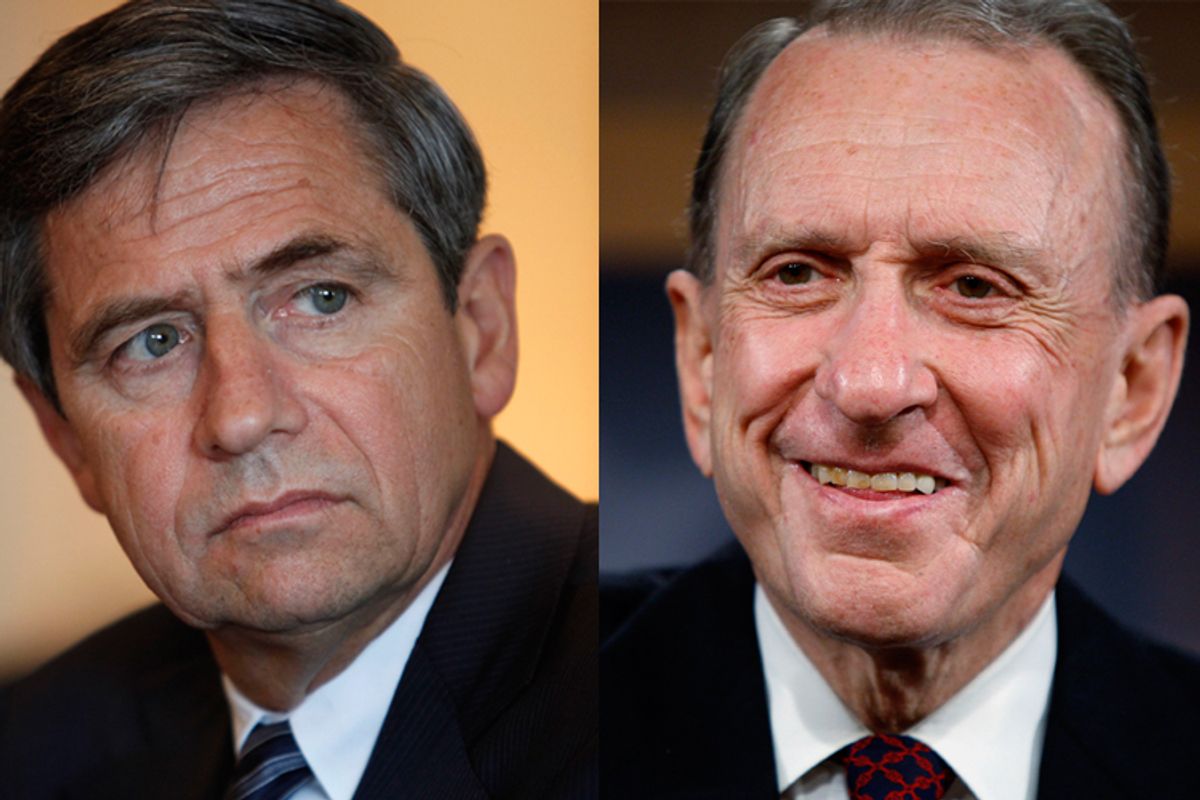 One party controls a sprawling majority in both houses of Congress, built up by winning swing seats over the last few election cycles, and has been trying to balance the often conflicting political impulses of all its different members. The other party has been shrinking rapidly into its traditional regional strongholds, losing many of its moderate members to the opposition in the process and unifying ideologically along the way.

But guess which one starts this election year off wondering which of its establishment candidates will fall to primary challengers?

There's a general anti-incumbent feeling around the country this year, and Democrats are likely to feel that come November, if not earlier. For one thing, more retirement announcements could come in the wake of the news that Democratic Sens. Chris Dodd of Connecticut and Byron Dorgan of North Dakota won't be running again. But even with all the anger among progressive activists lately -- especially over the twists and turns that healthcare reform legislation has taken on the way through Congress -- few Democratic incumbents are scrambling to fend off a liberal challenger in intra-party battles. The highest-profile Democratic primary fight, Pennsylvania's Senate race between Arlen Specter and Joe Sestak, features an incumbent who began 2009, after all, as a Republican. Conservative Arkansas Sen. Blanche Lincoln essentially held the healthcare bill hostage for some abstinence-only sex education funding and helped block a public insurance option, but Lt. Gov. Bill Halter, whom some progressives would like to see take her on, still won't commit to running. The GOP, meanwhile, may watch the sitting governor of Florida lose a Senate primary to a conservative upstart; in Connecticut, one-time moderate Rob Simmons now carries a copy of the Constitution around with him in an attempt to pander to tea party activists.

The election is still 11 months off, and more challengers could appear on the Democratic side. But for now, the party's leadership is breathing a sigh of relief that an already tough year isn't tougher.

"We don't have those pressures which would be ... a real problem," says Eric Schultz, the spokesman for the Democratic Senatorial Campaign Committee. "You look at the other side -- they have primaries in every state. You have Mark Kirk in Illinois, the seventh-bluest state in the country, doing back flips every day to move to the right" to fend off primary challengers. At the Democratic Congressional Campaign Committee, the House counterpart, aides agree. "There's going to be some candidates -- there always are -- that are going to run, but there's not anything like the organized movement that we've seen on the other side," says spokesman Ryan Rudominer.

That's not to say Democrats will have an easy time on Election Day this year. "The problem for them moving into this year is slightly less liberals than the independents," National Republican Senatorial Committee spokesman Brian Walsh says. In the House, Democrats would probably be happy to lose only a handful of seats (as opposed to a big GOP wave). But so far, vulnerable Democrats may not have to pull off the tricky navigation act of moving to the left to win a primary, then dashing to the center to persuade independent voters that they didn't actually mean any of what they'd said before.

Instead, liberals -- both activists and potential candidates -- appear to be picking their battles. "It's always hard to recruit candidates against incumbents, and especially in what I think is going to be a tough year for Democrats," said Mike Lux, a Democratic consultant who handled outreach to the progressive community for President Obama's transition team. "There's a lot of people looking at these races and thinking, 'Well, even if I pull off a surprise and knock off an incumbent in the primary, then I have a very tough road in the general.'" Besides, the Gallup poll is finding little evidence that liberal voters are deserting President Obama, despite all the angst in 2009; the Democratic Party may be more unified than the healthcare debate made it look. The GOP primary challenges may also be pushing Republican candidates to take more extreme positions than Democratic challenges would -- polls show, after all, that many voters like the idea of a public insurance option as part of healthcare reform, so candidates who embraced that to help fend off a challenge might not struggle later.

Activists say they'll still keep the pressure on. One group, the Progressive Change Campaign Committee, commissioned a survey last month that found that 84 percent of Democratic voters want to see primary challenges against any lawmaker who's voted against a public option. The group's co-founder, Adam Green, says they'll try to help elect more progressives this year -- though he wouldn't specify which races will be targeted. At DailyKos.com, founder Markos Moulitsas says at least some primaries are inevitable. "I'm always looking for good primary challenges, and I'm confident we'll have several this year," he says. "Fixing the Senate will be a long-term project, and those Democrats that helped water down this healthcare bill will be wearing the biggest targets on their backs."

Beating an incumbent is hard enough with an early start, though, and if would-be challengers don't step in soon, it'll be very difficult to organize supporters, raise money and compete aggressively for primary nominations. Instead of taking on conservative Democrats, some activists may simply channel their energy into helping bona fide progressive ones elsewhere. "We're going to see the most active part of the Democratic base unwilling to actually put in the hard work for the Democrats who refused to fight," says Ilyse Hogue, the director of political advocacy at MoveOn.org. "What I know we're going to see among our members is more discerning choices around who they want to fight for in 2010." Some newly minted Blue Dogs who were elected with the help of MoveOn in the last couple of years won't be able to count on them this time around, even if the group doesn't support a primary challenge.

What lesson the lack of primary challenges leaves depends on who's looking for one. One Senate Democratic Leadership aide, who didn't want to discuss possible intra-party disputes publicly, thinks activists are starting to think strategically in ways that mirror the calculations done inside the Capitol. "By and large, the Netroots -- they know what winning tastes like in 2006 and 2008, and they know that not everybody is going to be Barbara Boxer," the aide says.

But, in fact, it's not clear at all that progressives agree with establishment Democrats that anyone with a "D" after their name is an automatic improvement over a Republican alternative. "When you're in the majority and you're still not enacting the bold reform that people elected you to enact, then it becomes a question of quality, not quantity," says Hogue. "Fifty-nine or 60 [seats in the Senate] doesn't matter when the 60th vote holds the entire Senate hostage to the lowest common denominator ... At that point, the base becomes willing to lose a seat and fight for what's right."

More than anything else, what saves some conservative Democrats in 2010 might just be the calendar. Nebraska Sen. Ben Nelson and Connecticut independent Joe Lieberman (who caucuses with his former party) aren't off the hook with liberals -- they're just not up for reelection this year. Sometimes, after all, politics comes down to luck.