The case against LOTR: Scrubbing bubbles!

Haters speak: Jackson's trilogy is too long, too short, too racist, too slavish and takes too many liberties. 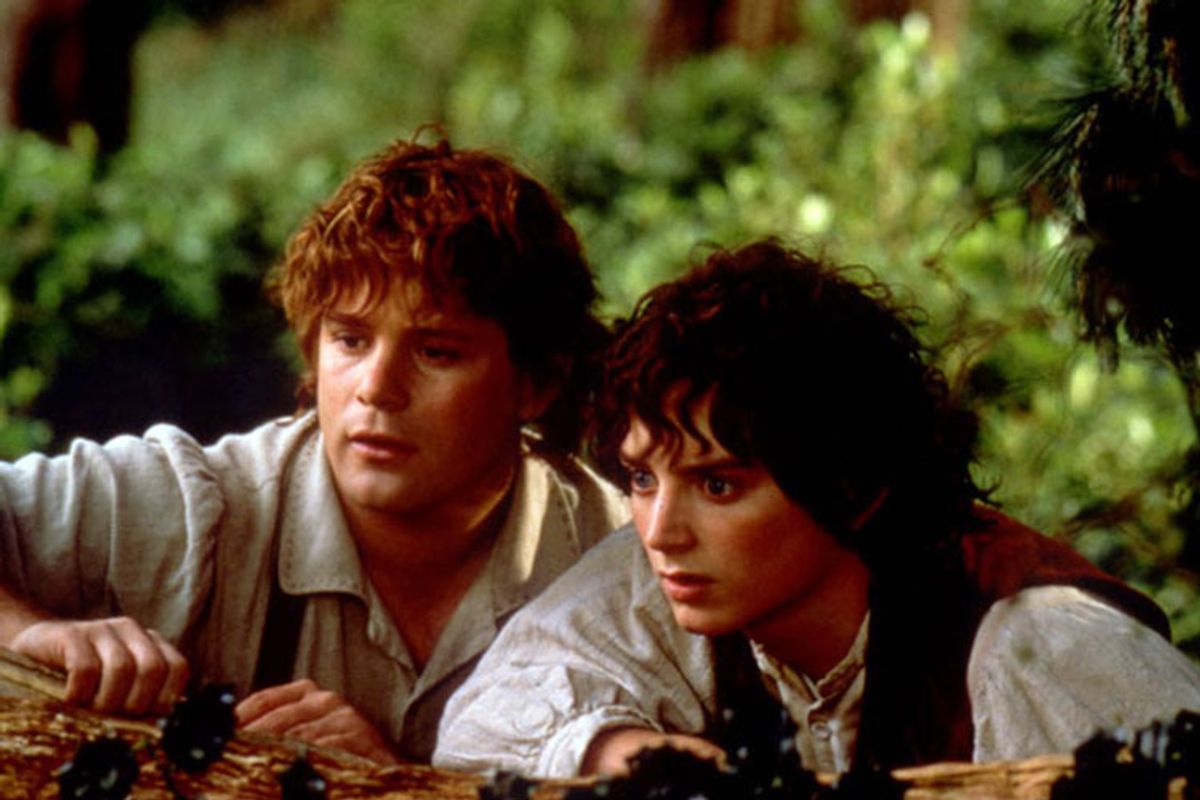 Responses to my original post about how and why the critical reputation of Peter Jackson's "Lord of the Rings" trilogy has fallen so far and so fast were divided fairly evenly between pro- and anti-LOTR factions. But while the lovers had a pretty consistent argument -- we think these are wonderful fantasy movies, and we don't care what the supposedly cool espresso-depresso crowd thinks -- the haters were all over the place.

This provokes me to milk the debate just a little longer, and also to save you the trouble of reading through almost 200 comments to find the juiciest McNuggets. To be clear, I'm genuinely not pimping any particular ideology. I enjoyed the films immensely, and wrote a rave about "Return of the King" for Salon at the time. But I can barely remember them today, feel unsure whether I'll ever watch them again, and still don't regret leaving them off my own personal decade-end list. Then again, this isn't about my dumb-ass list, or Stephanie Zacharek's, or anybody else's; this was about the fact that when I reached out to 60 or 70 filmmakers, critics and bloggers I know, in search of entries for our Films of the Decade series, not one of them suggested Jackson's colossal trilogy as a personal favorite. So something's going on here, and these responses are helping me figure it out a little.

One line of thinking goes like this, courtesy of reader sethgoldman:

These movies were just not that good. They exhibited a good degree of technological and logistical achievement but little more. I sat through all three and just found them to be long and boring. I enjoyed the books and tried, at the time, to identify the reasons the movies fell flat. (Unfortunately I had no help from critics or friends who all claimed the movies to be works of perfection.) What I came up with is that the films were both too long and too short. They were long enough to be slow moving and boring but not long enough to fully draw you in to their world as reading hundreds of pages of Tolkien's work surely does.

Quite a number of Tolkien fans expressed moderate to grave disappointment with the trilogy, in fact -- far more than I was expecting. Reader ptolemyx aired a whole series of grievances:

-- Orlando Bloom: too mincing by half. Sorry, ladies.

-- Galadriel and Celeborn: "we-talk-slowly-so-we-must-be-old-and-wise..." Come ON. Plus the entire scene of Galadriel's temptation by the ring: shite. Bad acting, bad effects.

-- In the last movie especially: the angry vagina of Sauron. It looks here! It looks there! It's ... a lighthouse?

-- The arc of the final battle scene. A chapter (or three?) of grim desperation turned into a moment of furrowed brows and then, lo!, a wave of green-glowing zombies comes to the rescue! Suck.

Let's award extra points right now to TheKaiser, who described the aforementioned Army of the Dead who turn the tide at the climactic battle in "Return of the King" as "scrubbing bubbles."

One particularly eloquent evisceration of Jackson's treatment of the source material, understood as an inversion or betrayal of Tolkien's novels based on a "cinematic requirement for the endearing weakness," came from reader jamzen:

In Tolkien's storytelling, every character lives in relation to the background myths. It is in relation to those -- the tales contained in the almost immemorially ancient Silmarillion, and the many others that Tolkien had already spent a lifetime defining by the time he started working on LOTR -- that every character in LOTR -- elf, dwarf, wizard, human, defines himself.

But Jackson's script destroys this. The destruction isn't all that apparent in "Fellowship of the Ring," but with each of the next two films it encroaches further and further on the story as originally told. Characters such as Elrond, Gimli, Denethor, and Treebeard, as the film defines them, are pathetic travesties of those Tolkien gave us in his three volumes.

One way of seeing Tolkien's achievement is that he gave us real, presumably complex persons, with extensive interior lives, acting in a moral universe defined by the huge expanse of their cultural myths. Every significant choice that Aragorn makes, he makes against a historical background: he knows the history of the Rangers, the Dunedain, stretching back to Gondor and the Numenoreans. He knows his heritage.

The same is true of the other participants in the attempt to destroy the One Ring. None of them has any private motive apart from those provided by their cultures.

Except for the hobbits. They, common little people, have no such history. In their folktales, the memorable items are the blizzard of '78, or somebody's great-grandfather who was big enough to ride a horse. They did not participate in any of the world-defining and world-transforming events that constrain the other members of the Fellowship. They have no prior cultural commitments regarding any of the large issues that are involved for anyone else. So Sam and Frodo, and even Merry and Pippin, as Tolkien tells the story, have plenty of reason to wonder to each other why they are doing this. None of the other members of the Fellowship ever talk about their motives.

Jackson's script wipes out this distinction. Completely. Everybody in the Fellowship, it turns out, has some personal axe to grind.

That may have been innocent enough at first. It's not unreasonable, perhaps, to say to oneself, "Well, viewers need something to identify with, some little idiosyncrasy or weakness in their heroes. One can't expect them to watch abstract principles in action." But then, by the last film, we have Denethor presented as a pathetic, self-centered fool rather than as the tragically misguided figure, heroically sacrificing himself to an empty model of quasi-roman heroism. We have Gollum, free of his mindless obsession with the precious, enacting a preposterous plot to turn Frodo and Sam against each other. We have Gimli become one of the three stooges. We have Elrond and Arwen acting out petulant parent/child arguments.

And the biggest howler of all, Frodo, at Mount Doom, announcing his inability to free himself from the Ring in words and gestures that might be lifted straight from an old Fu Manchu movie. Yuk and double-yuk.

Oh, and the Ents. Don't get me started on what Jackson did to them. In the film, they are comic figures and they are stupid. They are dumbed down to where, in just two sentences, Merry can persuade Treebeard to completely reverse his course and take them near Isengard.

In order to provide this endearing touch, Jackson had to rewrite the Entmoot so that it turns out exactly the opposite of Tolkien's Entmoot: the ents decide to have nothing to do with the coming battle. Jackson's cinematic requirement for the endearing weakness has conquered all: myths, legends, and finally even Middle-Earth common-sense. None of these characters has any heroic resonance at all. If Jackson wanted viewers to feel as though his characters could have come off the street, as though we could sit down and have a beer with Boromir -- well, unhappily, he succeeded all too well.

There was a fair amount of debate about whether Tolkien's original epic was racist, or perhaps racist in effect (as an imaginary mythology rooted in the British Isles) but not in intention, and about how Jackson dealt with that issue. The case was perhaps stated in its most developed fashion by Mountainviewer:

I don't think the original books (overrated as literature IMHO) or Tolkien's project were racist per se, or feudalistic, or even necessarily conservative. He seems to have wanted to create a set of myths for a society -- his own -- that he felt was sorely lacking in same, from a comparative-cultures view. Myths can serve good, even progressive purposes, and I think that's what he had in mind. It made sense then that his center of gravity was archaic northern Europe, and the hierarchical relationships were more classical (Olympians vs. mortals) than they were medieval/feudal (lords vs. serfs). And -- though someone who has read the books in the last 20 years might correct me here -- I don't think the descriptions of the "bad guys" in the books trafficked overly in racial (or religious) hysteria.

HOWEVER, the entire literary and visual genre that has descended from those books has no such putatively noble purpose in mind. It simply consists of artists and audiences that get off on the visual and rhetorical aesthetics of premodern society, with all its attendant xenophobia, authoritarianism, corporatism, etc. When placed in a modern context, it's impossible for most of that work not to come across as racist or even fascistic, regardless of the specific plot argument.

Now, the films of LOTR had to walk a fine line. They could have taken refuge in the specificity of the books' project while distancing themselves from the aesthetic community the books created. That is to say, we could have seen multiracial elves, white bad dudes, etc., etc., while still keeping the mythogenic purposes alive. They (mostly) didn't do that, (mostly) giving in instead to cheep visual cues of the type already discussed here. A kind of fidelity to the letter of the texts (something the purists have already noted was of only varying interest to Jackson et al) while missing the opportunity to recuperate the spirit.

Other readers suggested that the trilogy's near-constant play on TNT has worn out the audience and made the films seem like cultural wallpaper. What would have happened to the reputation of the "Godfather" films, wondered kalyarn, if cable networks had existed in the late '70s to play them nonstop?

A few people picked up on my suggestion that the movies now belong to a lost, post-9/11 era of American cultural history. "All that talk about 'Men of the West' fighting the amorphous menace from the east, the obsession with dynasties -- it's all so G.W. Bush-era," wrote possible possum.

But I was especially struck by a comment from ducdebrabant, near the very end of the thread, headed "We don't read James Branch Cabell anymore either":

The LOTR films are achievements in a way: they prove the books can be filmed. To my mind, they never prove they ought to have been. Jackson takes the texts, treats them as canonical, turns them into coloring books, and colors them in. Everything that's in them is cleverly and dutifully put on the screen in a technically complex and ultimately labored way. The movies have no spontaneity, independence, idiosyncrasy or charm. They are slavish. They might as well be a Muslim's film of the Koran. Unlike Jackson's "King Kong," which is a very good film and a take on the original, the LOTR films are nobody's take. They express nothing but of the filmmaker but his virtuosity. It's odd to call something so crammed with superb CGI, marvelous actors, exquisite set design, good taste, fast-paced action, mysticism and exoticism ... pedestrian. But that's what they are -- the most ambitious, expensive, elaborate and eye-socking pedestrian movies ever made.

Film Salon J.r.r. Tolkien Movies The Lord Of The Rings