Chris Dodd's big chance to be a leader

Wall Street's favorite senator doesn't have to raise money anymore. Time for him to stand up and be counted 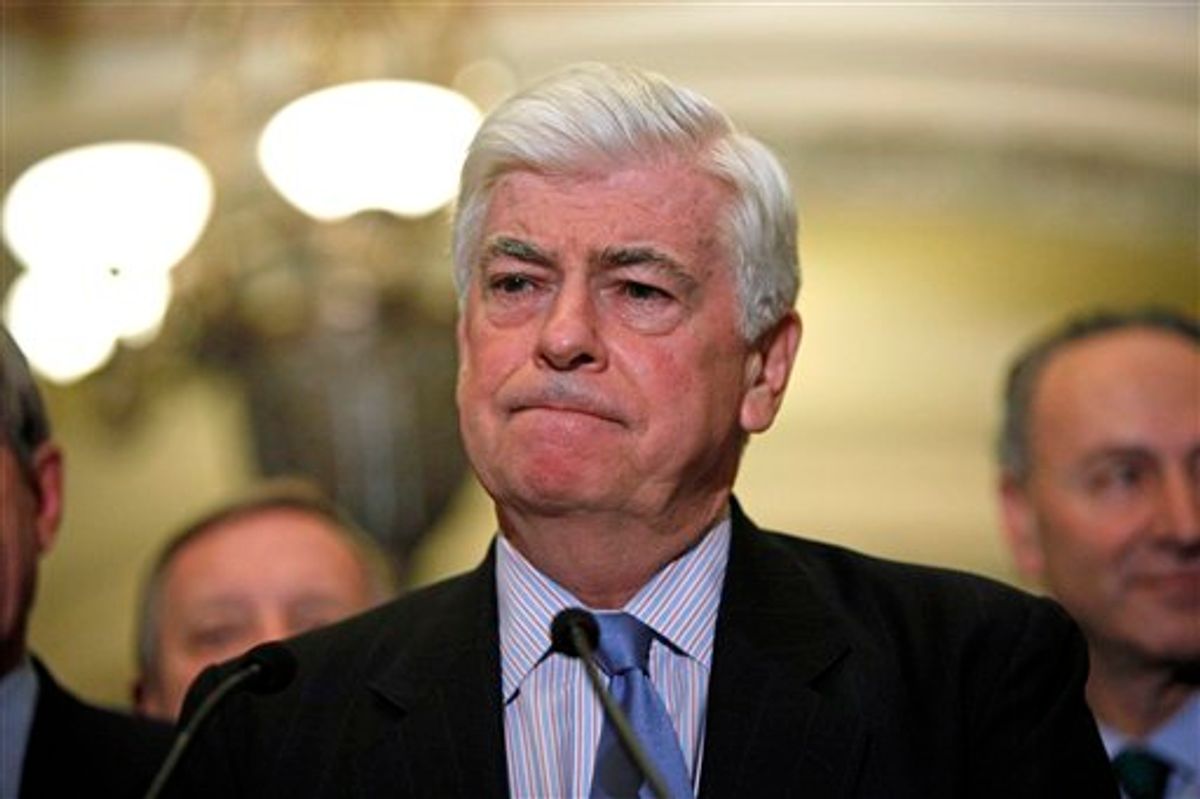 When you are the chairman of the Senate Banking Committee, money flows from Wall Street into your coffers like the Mississippi to the Gulf of Mexico. When you are a senator from Connecticut, home to zillions of hedge funds and insurance companies and just a skip away from New York, the lobbying love gets magnified even further. So no wonder that over his nearly 30 years in the Senate, Christopher Dodd has received more cash from the financial industry than nearly any other legislator.

Dodd's close ties to the financial industry are a big reason why his popularity in Connecticut has sunk like a stone since the outset of the financial crisis. In fact, his decision not to run for reelection can paradoxically be attributed to Wall Street's largesse. The fat cats have been so generous because Dodd's power to shape financial regulatory reform is immense -- but that very generosity has so enraged the public that Dodd will soon be in a position where he can no longer do their bidding.

But he's not quite there yet; he's still got another year to make his mark. Last November, Dodd introduced a "discussion draft" of a financial regulatory reform bill that will be one of the Senate's top priorities this year. Some kind of regulatory reform will make it into law. So the question everyone is now asking is: What does Dodd's resignation mean for the future of reform? Whither Dodd's legacy?

An optimist might be inclined to dream that Dodd's decision to resign means he is now free to do what he wants, that he is no longer bound by the millions he has raised from Wall Street and no longer need be attentive to their concerns. He doesn't have to raise any more cash -- so now is the time for fire and brimstone!

However, the exact opposite scenario is more likely. Those who track the labyrinthine trail of regulatory reform were somewhat surprised by the strength of Dodd's bill when it was first revealed last November. In significant ways, it packed a tougher punch than Barney Frank's reform bill, which the House passed in December. Dodd's bill proposed a consolidated bank regulator that would strip the Fed of some of its bank supervision responsibilities, and Dodd's version of a Consumer Financial Protection Agency was stronger than Frank's.

Conventional political wisdom explains Dodd's aggressive stance as a nod to populist banker hatred. In order to increase his chances of reelection, he was trying to prove that he was going to be tough on Wall Street. Naturally, Republicans, led by the ranking minority member on the banking committee, Alabama's Richard Shelby, attacked the bill and immediately declared their vehement opposition.

The insta-analysis coming out of the financial press now holds that the chances of getting a financial reform bill passed in 2010 have increased as a result of Dodd's resignation, because now he is free to compromise with Republicans, since he no longer has to worry about getting reelected. In other words, now he can do just what Wall Street wants him to do -- water down reform --- without paying an electoral price.

This is how crazy our mixed-up, broken government is. The Journal quotes one analyst, International Strategy & Investment's Thomas Gallagher, as saying that "presumably now he has a greater interest in leaving a legacy." Meaning: He's willing to make the compromises that will get a bill passed.

But how is that a legacy? A neutered reform bill won't cement Dodd's name in history -- it will do exactly the opposite, and ratify his current unpopularity for all time. Meaningful reform requires a tough bill that cracks down on unregulated derivatives trading, addresses the problem of too-big-to-fail financial institutions, and brings into being a Consumer Financial Protection Agency with teeth. But the achievement of such things, in the face of unrelenting opposition from the GOP and so-called moderate Democrats would require leadership.

Dodd's career as a politician will be over in a year. He doesn't have to worry about raising any more money or pissing off other senators or outraging his hedge fund friends. He has the freedom to make a real difference. It is time for Chris Dodd to stand up and be counted. The tragedy is that this is about as likely as the Mississippi suddenly reversing itself and flowing north.