A saga of war, rebirth, jealousy and Henry Kissinger 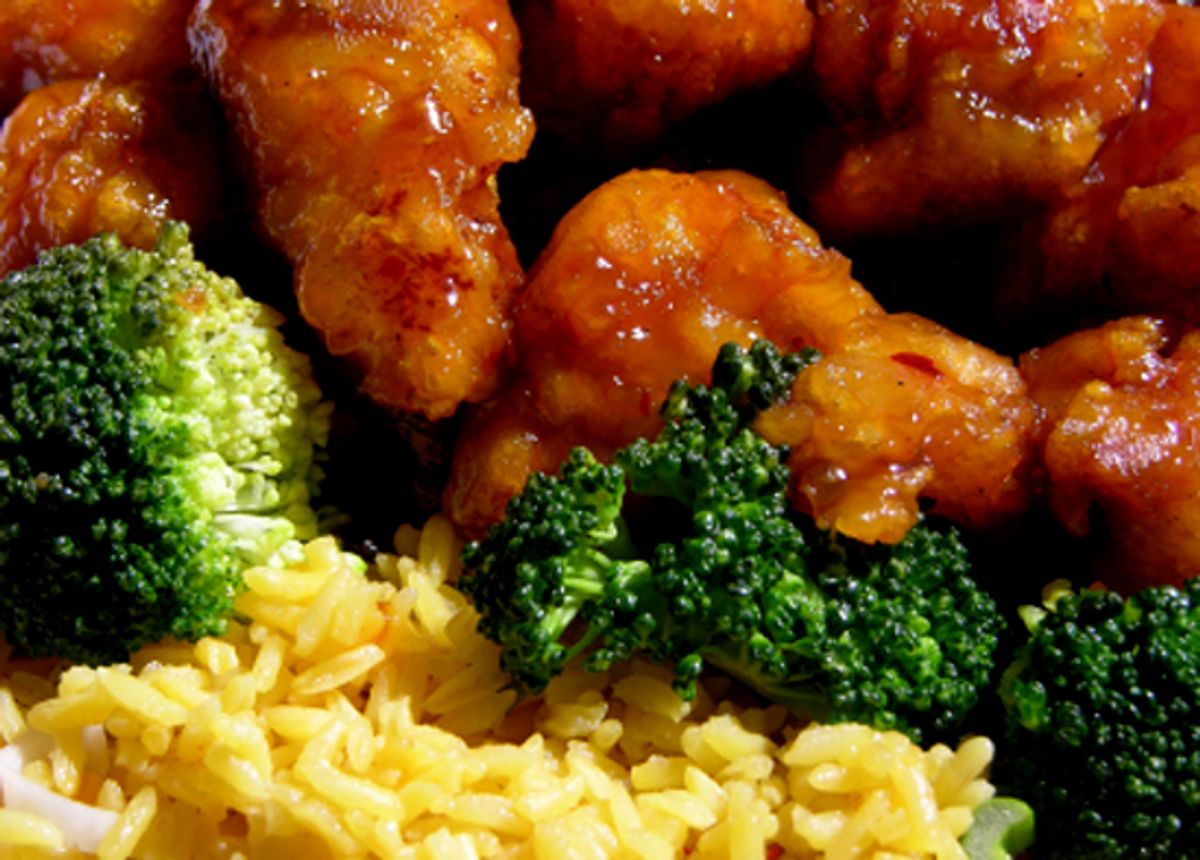 Here's the first thing you should know: The general had nothing to do with his chicken. You can banish any stories of him stir-frying over the flames of the cities he burned, or heartbreaking tales of a last supper, prepared with blind courage, under attack from overwhelming hordes. Unlike the amoeba-like mythologies that follow so many traditional dishes, the story of General Tso's chicken is compellingly simple. One man, Peng Chang-kuei -- very old but still alive -- invented it.

But what's "it"? Because while chef Peng is universally credited with inventing a dish called General Tso's chicken, he probably wouldn't recognize the crisp, sweet, red nuggets you get with pork fried rice for $4.95 with a choice of soda or soup. All that happened under his nose. It all got away from him.

Chef Peng's story starts in China, in his home province of Hunan, where he trained under a chef who worked in the home of a governmental official. In the way of really old-school governments, this official was a grand gourmet who spent much of his time collecting the finest culinary talent in the country under his roof, charging them with creating an innovative Hunan court cuisine. Their work borrowed from the haute cuisine of other Chinese regions and married them to the spicy, tart, salty flavors of the more peasant-oriented food of Hunan. Chef Peng inherited these dishes and skills, rising to prominence cooking banquets for Nationalist government bigwigs. When Mao took over in 1949, Peng, along with an entire generation of classically trained chefs, fled with their bosses to Taiwan, afraid for their lives and the ability to practice what would soon be called their reactionary cooking.

For decades, then, Taiwan was the repository for all of China's classic regional cuisines, and there chef Peng opened a thriving restaurant, serving the Hunan court cuisine for the first time to the public. Incredibly skill- and labor-intensive, it featured dishes like chicken with bean sprouts, only the chefs meticulously removed the heads and tails from the sprouts and shredded the chicken to their exact size and shape, so that the finished dish looks, simply, like a platter of white threads. In the "Revolutionary Chinese Cookbook," Fuchsia Dunlop recounts chef Peng saying that at some point in the 1950s, he created a dish, imbued it with the flavors most typical of Hunan, and named it in honor of General Tso, the second-most-famous military man from his home region. (Mao Zedong is the first, but it's hard to blame Peng for not getting over that whole forced-into-exile thing.)

Fast-forward a few decades. It's 1971, and New York is enjoying a heyday of Chinese cooking that it, and maybe the Western world, may never see again. American laws changed in 1965 to allow Chinese immigration, and a handful of those classically trained chefs from Taiwan joined forces with astute restaurateurs to open a string of phenomenally successful restaurants, the first truly Chinese haute cuisine restaurants in America, sizzling with an intensity of talent. These restaurants introduced us to Chinese regional cooking, first with a series of Sichaunese places. But, according to Ed Schoenfeld, an employee and later business partner of one of those restaurateurs, David Keh, by the early '70s New York went from having five Sichuanese restaurants to over 130. The scene had become a culinary arms race, with each new restaurant claiming to up the exoticism ante. "You'd see them taking out ads in the New York Times," Schoenfeld said. "'I'm chef So-and-So, and I'm serving these five dishes that have never been served in the U.S. before!' one would say, and then someone else would have an ad that talked about the 10 new dishes they're serving."

Keh and one of his rivals, chef T.T. Wang, decided there was too much competition in the Sichuan scene. So, in 1971, unbeknownst to each other, both went to Taiwan for inspiration and to recruit chefs, and both ended up at chef Peng's restaurant. Soon thereafter, back in New York, chef Wang and David Keh both opened Hunan-themed restaurants within weeks of each other, to incredible acclaim, including ever-rare four-star reviews in the New York Times. They both offered a cuisine totally unknown in the city, and yet their menus were strikingly similar to one another's. They both read like chef Peng's menu.

But, Schoenfeld said, "We didn't want to copy chef Peng exactly. We added our own spin to dishes. And so our General Tso's chicken was cut differently, into small dice, and we served it with water chestnuts, black mushrooms, hoisin sauce and vinegar." It was popular. But it was over at chef Wang's restaurant, Hunam, where the star was (re)born. "Chef Wang added a crispier batter to the chicken, and made the sauce sweet," Schoenfeld said.

"A year later, chef Peng himself showed up in New York, riled up, feeling like he'd been ripped off by these upstarts," he continued. "But by the time he arrived to open his own restaurant here, New Yorkers didn't realize he was the real thing, and some treated him like he was copying. And to be honest, he was a great chef, but not necessarily a better cook than the chefs who were popularizing his cuisine here." His restaurant was still successful, and in the post-Nixon-goes-to-China Sinophilia, he counted among his fans Henry Kissinger. His star power fired the idea of General Tso's chicken into our national consciousness, but it was chef Wang's crispier, sweeter version that Americans fell in love with ... and made our own, mutating with every new Chinese takeout restaurant from New York to Kansas to California.

He's not happy about it. In "The Fortune Cookie Chronicles," Jennifer 8. Lee meets chef Peng and shows him photos of what his child has become:

"He criticized the next picture because the chilies were red instead of black. But that was a minor crime compared to the travesties in some of the other versions he saw ... He shook his head when he saw the baby corn and carrots in a version from Dover, N.H.

"As he left, he told me that this was all moming-qimiao. Nonsense."

It's easy to understand chef Peng's indignation. But, perhaps, might it compare to the experience of the people of Hunan, whose own rustic cuisine is so far removed from Peng's courtly cooking? "As Hunanese restaurants got popular throughout the U.S.," Schoenfeld said, "and even in Hong Kong, where I've had it, all around the world they were all making Peng's food, not what Hunanese were really eating." Dunlop, too, points out in her book that Peng's dish "is now being adopted as a 'traditional' dish by some influential chefs and food writers in Hunan itself." She counsels, "Savor it, and dream as you do so of the Hunanese past, and the invention of new mythologies in the cultural melting pots of the modern world."

I'll take her up on her advice. I was raised on Cantonese home cooking, and didn't see my first white cardboard box of General Tso's chicken until I was in college, ordering sleazy Chinese takeout like everyone else. But a couple of years ago my great uncle told me a story of growing up in Guangzhou, diving for cover when the Nationalists blasted their way through the city, shelling the place with artillery as they beat their retreat to Taiwan. And now, every time I eat the general's chicken, I imagine chef Peng riding shotgun, his hands over his ears, dreaming of a time he could cook again, when the bombs stop bursting in air.