"Avatar" as a Chinese metaphor 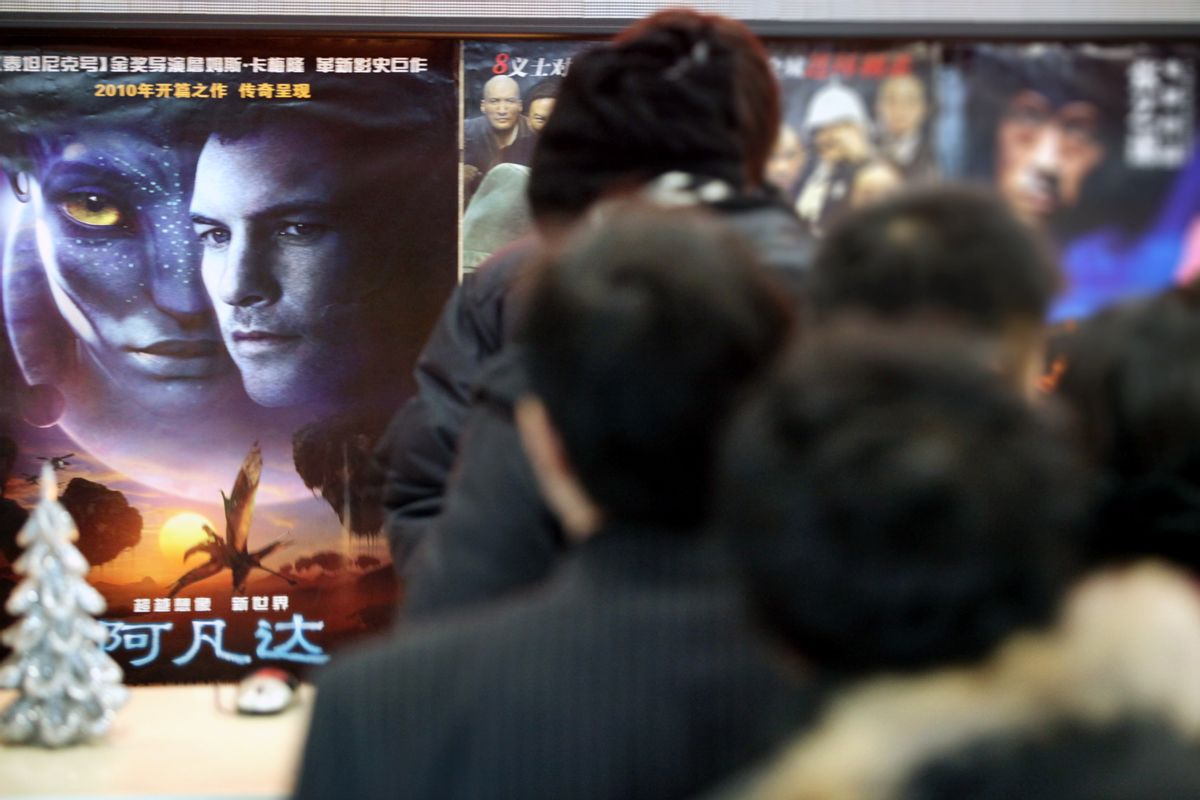 Local residents queue up to buy tickets for the movie, Avatar, at a cinema in Shanghai, China, January 6, 2010. James Camerons Avatar is already one of the top-grossing movies of all time, and it just now opened in the worlds most populous country, China, where it set a record as most successful opening in the countrys history. In its opening day Monday in China, the 3-D sci-fi epic took in 33.03 million yuan (US$4.8 million).(Imaginechina via AP Images) (Qi Yunfeng - Imaginechina)
--

As if we needed any more proof of James Cameron's transcendent genius, a tweet from Jeremy Goldkorn informs us that in Shanghai, moviegoers are getting in line in the wee, wee hours to grab tickets for "Avatar" in IMAX 3D.

Jan. 7 UPDATE: A friend of my wife offered to buy tickets for us. She showed up at 7:30am to get in line. The theater opens at 9am. When she arrived, there were already 200-300 people in line, some of whom had been there since 4am. Still, with so many showings every day, and a pretty decent capacity, you'd think that person number 300 could still get tickets. No dice. Everyone was buying up lots of tickets, so the theater was sold out of Avatar 3D IMAX tickets by the time our friend's turn came.

So are the Chinese attracted to the anti-imperialist message of "Avatar" or simply swooning, like everyone else, at the sublime CGI? Or is the true measure of Cameron's brilliance the fact that the seemingly unsubtle plot of "Avatar" actually allows all viewers to project their own passions onto its canvas? Malcolm Moore, the Telegraph's Shanghai correspondent, tells us that one Chinese reporter/blogger, Li Chengpeng, believes "Avatar's" "story is remarkably similar to the perils that ordinary Chinese face at the hands of avaricious property developers."

The seizure of property by developers without adequate compensation is a huge source of anger and bitterness.... The residents of Pandora were offered tempting compensation for their planet, but the locals didn't want to leave their native homes, no matter how much was offered.

The developer then gets angry and starts to get violent, and it turns out that it has links to the government and employs some thugs ("Just like the chengguan," Li comments, drawing a parallel with the semi-official law enforcement goons that are employed by Chinese cities to keep the streets clean of riffraff and administer neighborhoods).

If we take this Chinese theory and we put it together with a Forbes appraisal by Ann Marlowe that approvingly calls "Avatar" "The Most Neo-Con Movie Ever Made," citing its "deeply conservative, pro-American message," along with a review by Erik Davis that applauds the film for demonstrating that "the jungle pantheism that now pervades the psychoactive counterculture has gone thoroughly mainstream," there can be only one conclusion: "Avatar" is all things to all people -- the perfect film for an age of intimate globalization.

Avatar How The World Works